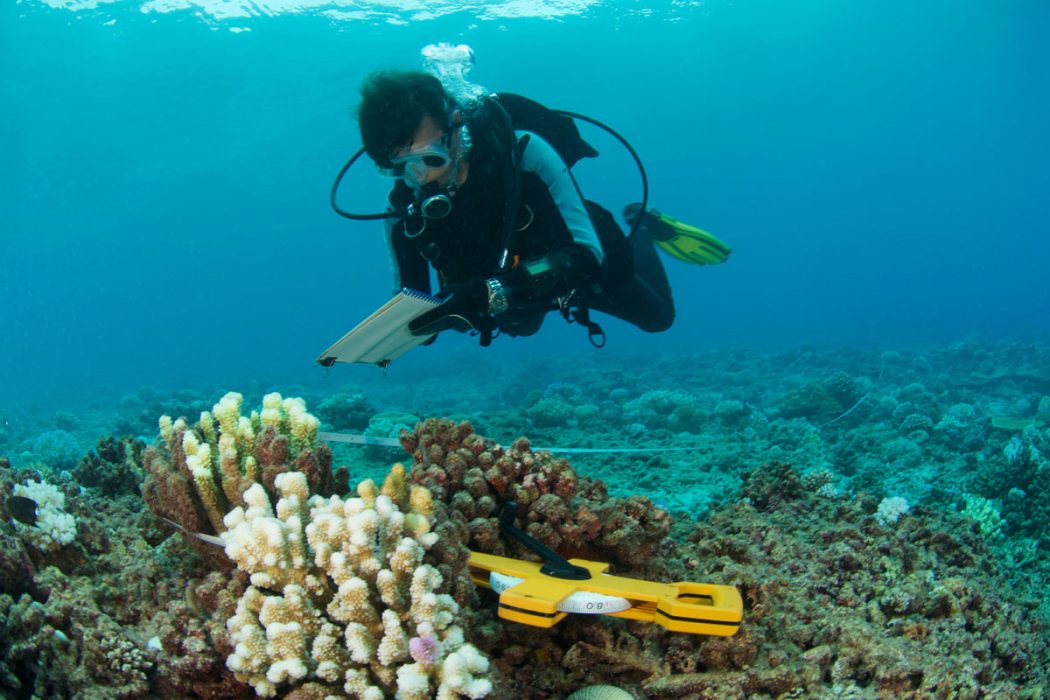 What do you want to be when you grow up? I suspect that is a question every school-age kid in America gets asked frequently. Some people know the answer from an early age. It takes others a few tries at various careers before they find a good fit, and unfortunately some never manage to find their passion.

In my case, I was lucky to see the light early on during my college years when I realized that I wanted to work in the marine realm. I became an underwater photographer, filmmaker, author and speaker specializing in the marine environment. However, there were times after I reached that decision when I wrestled with the question of whether I should pursue a career in some type of marine science instead. I had an aptitude for science and math, and I imagine I’d have enjoyed a career as a scientist had I pursued that path. But ultimately, photography and filmmaking won out.

Having met and worked with a lot of scientific specialists over the years, I now realize that I didn’t really have a good grasp of what being a scientist entails. But then again, I didn’t really know what life would be like as a camera-toting journalist either.

Not long ago I reached the career benchmark of having published more than 1,000 marine-related magazine articles. Writing those columns has helped me gain recognition in my field. In turn, that recognition has helped open a lot of diving doors, and over the years I have enjoyed numerous opportunities to dive and create photographs of marine wildlife in locations around the world. I think about my good fortune a lot, but even given all of my good luck, over the years I occasionally had my doubts about my chosen career.

In spite of having the chance to reach so many people, I often wonder whether my efforts to protect and conserve marine resources and habitats would have been more effective had I pursued a career in marine science.

Over the years scientists have played a huge role in my ability to capture the images in my photographic library and understand marine issues. Consequently, I often think of many scientists as the unsung heroes of my career. Even more importantly, the scientific community plays a huge role in the overall conservation effort.

People like me might serve as voices that help inform the general public about various issues, but scientists are the ones who conduct the research and analyze data. It is scientists who provide us with the all-important facts. Like a lot of photographers and filmmakers, I often get a lot of credit for being a vehicle of change and a voice for creatures and places that cannot speak for themselves. While I appreciate the kudos, scientists are the ones who do the heavy lifting. 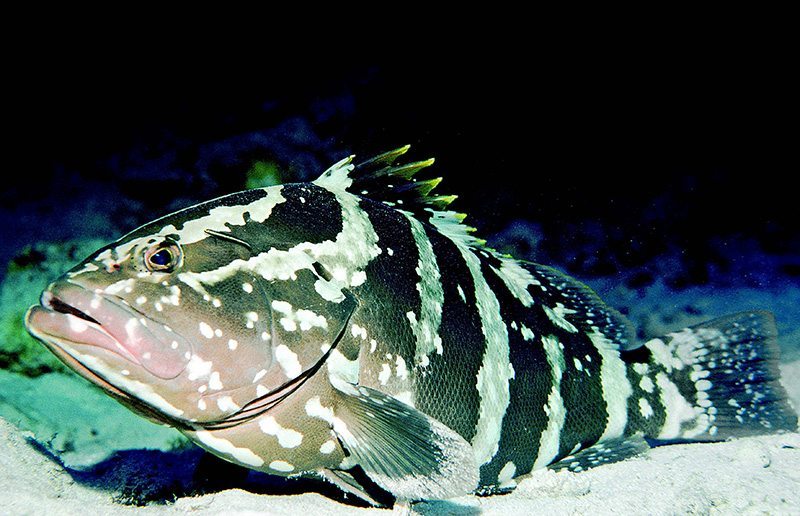 REEF is involved in a variety of projects, including Grouper Moon, an operation to help protect the spawning population of Nassau grouper in the Cayman Islands.

My reason for providing the background information about my career choice and my regard for scientists is so that you will understand what motivated me to become a member of the board of trustees of the Reef Environmental Education Foundation (REEF). The organization was founded in 1990 out of a growing concern for the health of the marine environment and the desire to provide the diving community a way to contribute to the understanding and protection of marine populations. I joined REEF three years ago.

Today REEF is involved in a variety of projects, including working to control the populations of invasive lionfish in the western Atlantic, Caribbean, Gulf of Mexico and along the southern and eastern coasts of the United States; Grouper Moon, an operation to help protect the spawning population of Nassau grouper in the Cayman Islands from serious overfishing; and surveying fish populations around the world, including those in eight national marine sanctuaries in partnership with the National Oceanic and Atmospheric Administration.

Of special interest to me, REEF’s fish surveys help create a worldwide database of information regarding the fish species that occur at various sites around the world along with the relative abundance of these species. REEF volunteers dive with a slate, pencil and a waterproof data sheet that lists commonly seen species in a geographical area (and in many instances a dive site). There is also room on the paper to note sightings of additional species. After a dive or at the end of a trip a surveyor goes online, enters and uploads their data. It really is that easy. In fact, REEF surveyors, most of whom are simply interested sport divers, have conducted more than 178,000 surveys of fish populations.

I have long been convinced that as divers, the more we know about the creatures we encounter, the more enjoyment we will get out of diving. Coupling knowledge with an underwater activity is a winning formula when creating lifelong divers.

It doesn’t take long before most of us need something to do during our dives before we get a little bit bored. That might seem a bit surprising if you are a new diver. But the facts support this statement. Conversely, give us something to do and strive for underwater, and we dive for a lifetime. Fish surveys are that “something to do” for a lot of divers. And those divers make a significant contribution to a number of projects around the world. That’s because REEF makes its data available for free to anyone wanting to use it.

Every month scientists, government agencies and other groups tap into the raw data in REEF’s survey database to support a variety of projects. As examples, a scientist from the University of Miami is using the data to help evaluate the status of Caribbean predatory fishes while other researchers used data on gray snapper to better understand how climate change is affecting the range of adult fishes. Those are just two of many examples in which REEF’s data has been used to help specialists determine the health of various species, ecosystems and the oceans as a whole.

One question that often gets asked is whether surveys conducted by lay divers are accurate enough to be of value. A number of scientists asked that very question in the early days of the citizen science movement. The short answer is that analysts found the data to be accurate enough to contribute greatly to their work. In other words, the concept of using trained volunteers as “citizen scientists” works. And not only does the grassroots effort of citizen science work, the value of the collected data makes it financially possible for many specialists to conduct a lot of meaningful research that would otherwise be unaffordable. The value of this benefit should not be underestimated.

The descriptions of REEF’s projects might make you think that the organization has a large staff of marine biologists. In fact, REEF is small and streamlined. Modeled to some extent after the Audubon Society, REEF depends in large part on the efforts and contributions of sport diving volunteers like you and me to accomplish our work. Ultimately, any diver that cares to do so can contribute to the work of scientific specialists around the world by surveying fish populations. That’s cool. 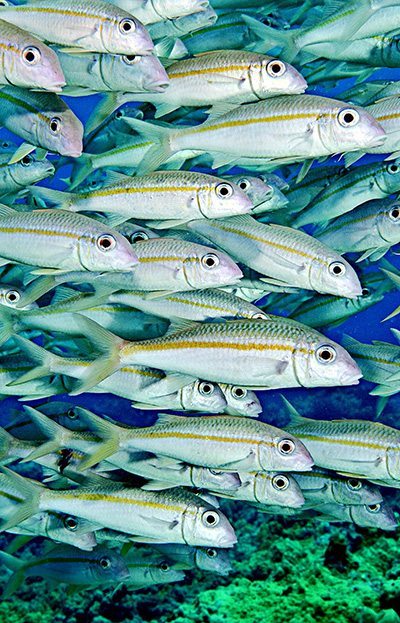 Ultimately, any diver who cares to do so can contribute to the work of scientific specialists around the world by surveying fish populations.

While I have been a member of REEF’s board of trustees for a few years, I had never conducted a fish survey until a recent trip to Mexico’s Revillagigedo archipelago. Conducting surveys meant that I split some time between my photographic efforts and my surveying, but I was free to do as I chose.

Despite having dived the same sites many times before over the years, I saw a number of fishes for the first time. So there is no doubt in my mind that conducting the surveys and checking results by consulting various reference books and talking with other members of our group increased my knowledge base. Score another point for surveying fishes.

And knowing that the data we collected are going to be used to help create baseline records regarding fish populations at the Revillagigedo archipelago, some islands I truly love, more than makes my day. Over the years I have dived in this remote area quite a few times, and I find it to be a truly magical place; one that holds a special place in my heart. How could I not want to help in some way to conserve and protect a place where I have swam with whale sharks, schools of scalloped hammerheads, tiger sharks, silkies, manta rays, tunas and more?

If you are interested in making a contribution to science or doing some “diving that counts” as REEF’s motto states, consider joining REEF or any other group that uses citizen scientists to accomplish their goals. If you are anything at all like me, and literally thousands of other REEF volunteers and other citizen scientists around the world, you’ll soon discover that diving in this manner gives your dives purpose and makes your diving experiences more meaningful. Clearly, that is diving that counts.