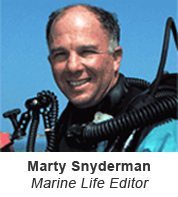 Dive Training contributing writer and photographer Marty Snyderman has written numerous how-to photography stories over the years. Little did Marty Snyderman know as a boy in Little Rock, Arkansas, that he would grow up to be one of the premier underwater photographers in the world. Family vacations to Florida (along with a boost from Lloyd Bridges and Jacques Cousteau) got him interested in marine life. During college at Vanderbilt University, a presentation by an underwater photographer got him hooked. He immediately went out and bought an underwater strobe, reasoning that if he had the strobe, he’d have to buy the camera too. Underwater photography became not only his livelihood, but his passion. Thirty years later, he can’t imagine a better career. He says, “With the possible exceptions of being an astronaut, submarine pilot or playing major league baseball, I feel like I have the best job on earth.”

Submit your Behind the Lens photo

Add a Diver for Perspective
AS AN UNDERWATER PHOTOGRAPHER, it is relatively easy to capture the attention of your audience if you share a picture of a whale, shark...
READ MORE
A Pattern of Rule-Breaking
DISCUSSIONS ABOUT PHOTOGRAPHIC composition are often filled with comments about “the rules.” You have probably heard of some of them. There is the rule-of-thirds...
READ MORE
The Thin Line
PRIOR TO A RECENT TRIP to the Philippines, I was reviewing some of my images of yellow-lipped sea kraits. While pleased with several, I...
READ MORE
Avoiding the Blue Water Blues
TAKE A LOOK AT THE PHOTOGRAPH that accompanies this article. When I shared this image at a recent meeting of the San Diego Underwater...
READ MORE
A Whale of a Shot
Avoid using an extremely tight frame or your shots could end up like this (see photo in inset). THE MAGICAL QUALITIES exhibited by whales capture...
READ MORE
Imagine That!
I am a big believer in the process of envisioning a photograph, at least in rough terms, and then seeing if I can create...
READ MORE