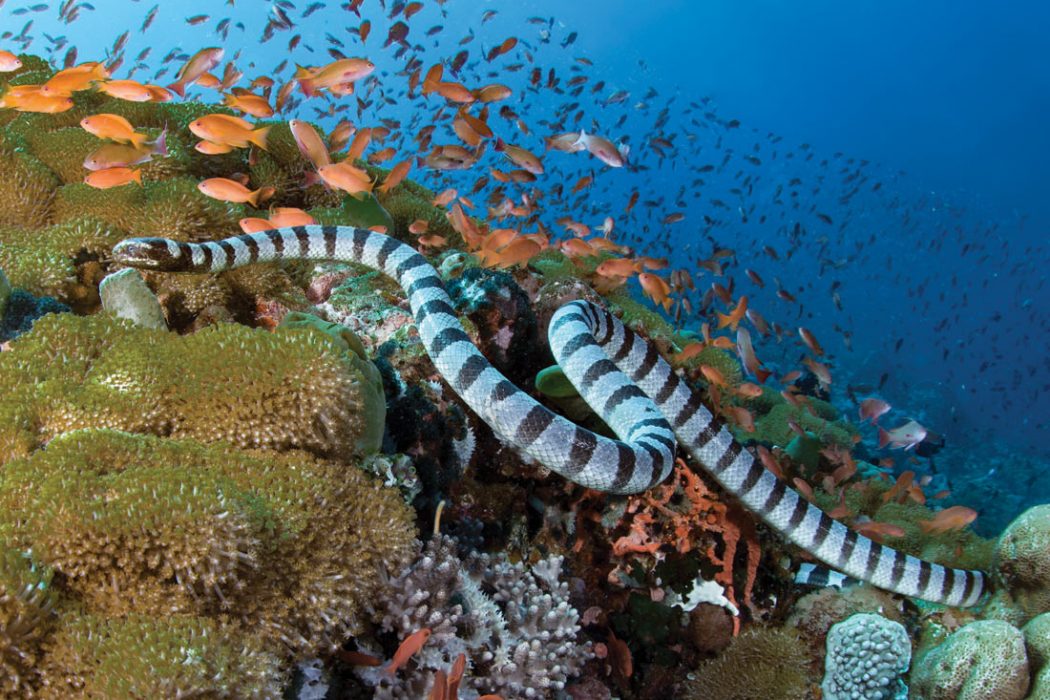 PRIOR TO A RECENT TRIP to the Philippines, I was reviewing some of my images of yellow-lipped sea kraits. While pleased with several, I found many others to be boring. Although sound in terms of exposure and focus, they lacked strong visual appeal.

As I asked myself what I could have done differently to create a stronger connection with viewers, it struck me that I composed too many of the shots by looking down onto the sea kraits. In those frames, my subject failed to stand out in a manner that commanded attention and showed off the life, beauty and colors in the reef community inhabited by the sea kraits.

I wanted the image to have strong visual appeal while sharing the context of the sea kraits’ surroundings.

Naturally, I asked myself what I should do differently during my upcoming trip should I get another opportunity with a sea krait.

I considered a number of possibilities. Clearly, I wanted to compose some frames by shooting from a lower angle of orientation. But also I realized that if I shot while at the same level as a sea krait, my subject would likely appear as a thin line in a large frame, perhaps so thin that it would virtually go unnoticed. Not good.

So, I decided I would try to get lower and shoot at an angle that might allow viewers to see the reef and the blue water above it while also enabling the sea krait to occupy a pleasing percentage of my frame. Getting low and working in the tight quarters of the latticework of a healthy tropical reef community meant I would need to try to anticipate where the sea krait would go so I could get into position without crashing into the reef. When my opportunity arose, that is exactly what I did. That said, moving along a reef also required me to intermittently pull my eye away from my viewfinder to check for obstacles as the sea krait and I moved along the reef.

Lens selection is tricky when trying to photograph any long, thin subject such as a sea krait. When using an ultra-wide lens, subjects of this nature quickly get too small to hold viewer interest if you are not very close to your subject and, if your lens has a field-of-view that is too narrow, you have to back away from your subject so far that it becomes difficult to light as desired. After some consideration, I decided on a wide-angle lens with a close-focusing distance of only one to two feet (0.3 to 0.6 m).

Fortunately, I got the opportunity I was hoping for. I composed the shot with the sea krait moving diagonally through my frame and essentially parallel to the slope of the reef. In addition, I was able to use the curves in the sea krait’s body to lead my viewers to the krait’s eye and head allowing them to subconsciously orient to the scene and put the sea krait in context in a beautiful reef community.