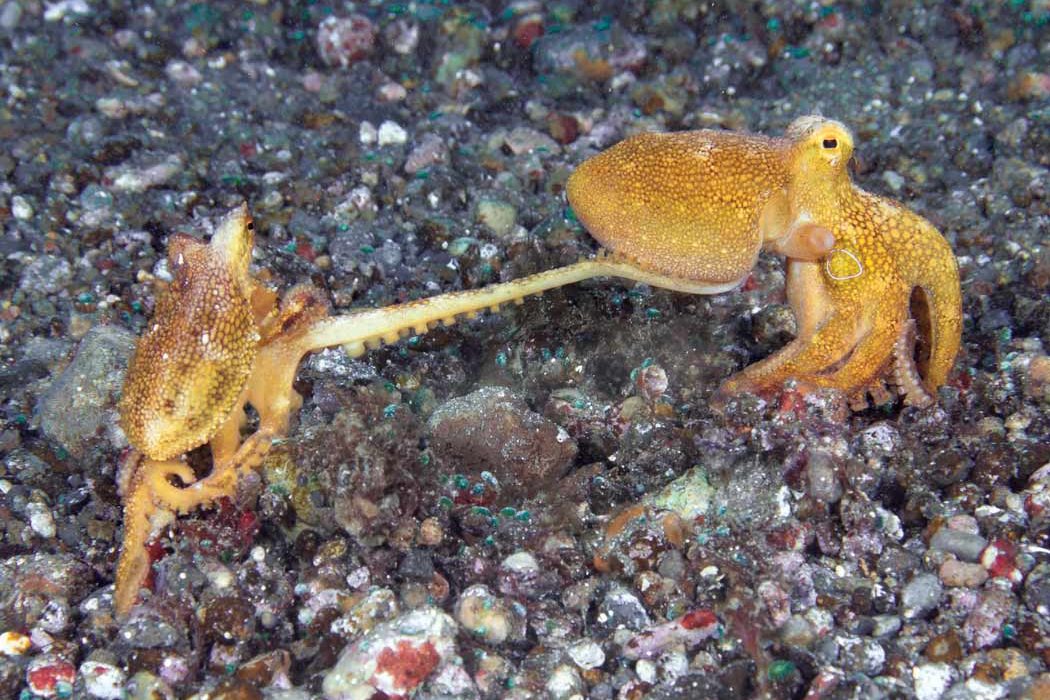 I am a big believer in the process of envisioning a photograph, at least in rough terms, and then seeing if I can create that image. I think this type of approach makes underwater photography far more interesting and rewarding than the approach of swimming around camera in hand while “grabbing” photographs of whatever I randomly encounter.

Successfully using this technique requires some experience and knowledge about subjects and camera systems. So if you are relatively new to underwater photography, this process might be one that you can aim for as your skill level rises. But even for the most experienced shooters, there are plenty of times when an unexpected opportunity suddenly presents itself. In my experience, the image of the pair of mating poison ocellate octopus that illustrates this piece provides a case in point.

Here’s how the image you see here came to be: I was on a muck dive in eastern Indonesia searching for a mimic octopus in an area where I had photographed one several years earlier. While scouring the bottom I came across a very small coral head. Experience has taught me that any structure that breaks up a bottom that consists mostly of sand or rubble can be an oasis for small creatures. So, I took a look around and quickly spotted a small poison ocellate octopus that was moving off the coral head and onto the sand. Bingo!

I composed a tight shot, and shortly after I did I saw an arm from another octopus enter the left side of my frame. I realized this meant I was composing a frame of a female when a male that was hoping to mate with her — by delivering a sperm packet he would place in her mantle — had suddenly appeared. Yahtzee! And Jenga!

And time to be quick. Trying not to stir up the bottom, I backed away so I could get both animals in the frame. And I slid slightly to my right trying to get both animals within my depth-of-field. Realizing that I needed to start shooting as soon as possible and that my existing shooting angle placed the two animals at slightly different distances from my camera, I focused on an area of the male’s arm that was slightly in front of the female’s body and closer to my lens. Given that the power of my strobes was turned up fairly high and my close strobes-to-subject distance, I knew I could use a relatively small aperture to help maximize my depth-of-field and be sure that all critical elements would be in focus.

Next, I quickly surveyed the edges of my frame to see if I needed to adjust my composition to “frame out” any distractions. Then I began to shoot.

According to the metadata in my files, the entire mating event lasted only 1 minute, 18 seconds. Crack whatever jokes you like, but from a photographer’s perspective the short duration speaks to how helpful it can be to quickly recognize animal behaviors, think fast, and quickly adjust our camera systems to get the shot.

Story and photo by Marty Snyderman
This article was originally printed in the January/February 2017 issue of Dive Training.