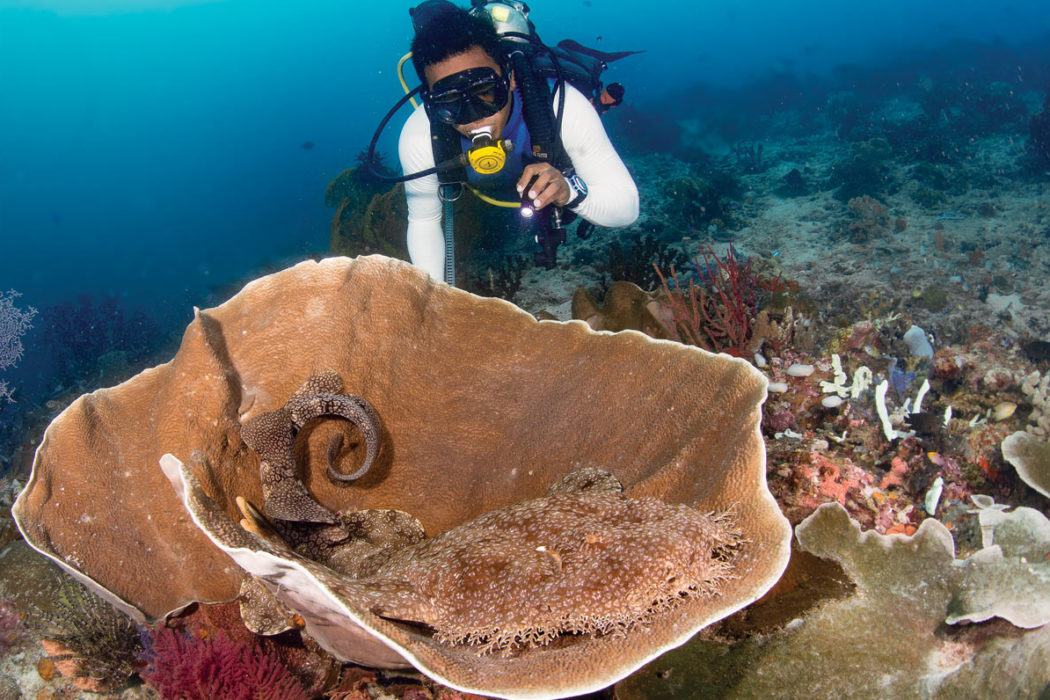 AS AN UNDERWATER PHOTOGRAPHER, it is relatively easy to capture the attention of your audience if you share a picture of a whale, shark or another relatively large marine creature. Including a diver in your frame can transform an interesting image into an “oohs” and “ahs” crowd pleaser. It is not simply putting a diver into an edgy position that can elevate the impact an image has. The diver also adds size perspective, a factor that can go a long way toward helping get comfortable with their understanding of the subject matter they are viewing.

As people familiar with the underwater realm, it is easy to forget that creatures that are common to us are often otherworldly to our audiences and, even for seasoned divers, there are always some subjects that we know little or nothing about. But if you include a diver in a photograph, confusion about size quickly disappears and that often creates a more favorable response to a photograph.

The four photographs below illustrate my point. A tassled wobbegong shark is the main subject in all four shots. In two photographs there is no diver. One of those pictures features an adult shark and the other highlights an animal that is probably only a few weeks old. Perhaps, if you are familiar with the species and its Indo-Pacific habitat, you will instantly realize that one shark is an adult and the other a juvenile. But that is not the case for many viewers. As a result, they won’t be able to infer anything about the animals’ sizes by just seeing the photographs.

But add a diver, as I did in the other two photographs, and the size of the shark in each image is instantly evident.

Experience as a presenter and as a photographer allowed me to realize both the challenge and the opportunity I had when I encountered these sharks. I found the adult first and created a few images of the shark alone. But I knew that by including a diver in my frame, I could provide some size perspective for my viewers. So, I motioned my dive guide to ask if he would help me. His cooperation enabled me to produce the photograph of the diver and adult tassled wobbegong.

About 15 minutes later I spotted the juvenile resting on a coral head in a similar position to the way the adult was positioned. To get the shot of the juvenile, I put my wide-angle lens very close to the shark’s face. I liked the resulting photograph but realized that many people in a typical audience would have no idea about the juvenile shark’s size. And in this case “size” definitely matters.

So, I asked our other guide if he would be my model. With his cooperation I was able to create this photomontage that shows the sharks’ relative sizes while revealing something about where the sharks live and their demeanor. Although I fear it will sound like I am bragging, I can say that when I show these images, I often hear a few “oohs” and “ahs” from the audience. 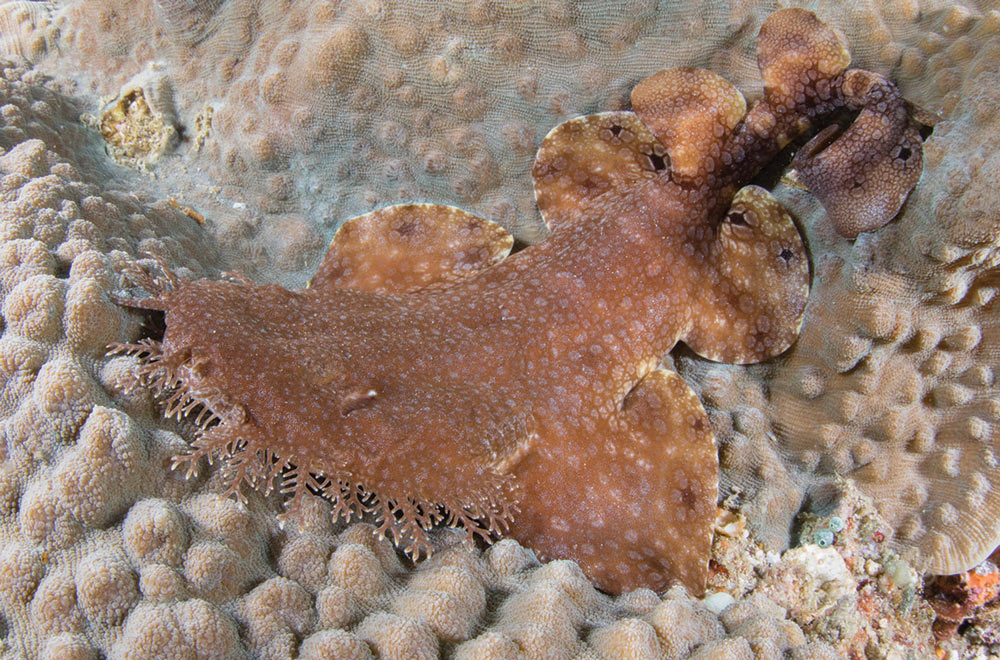 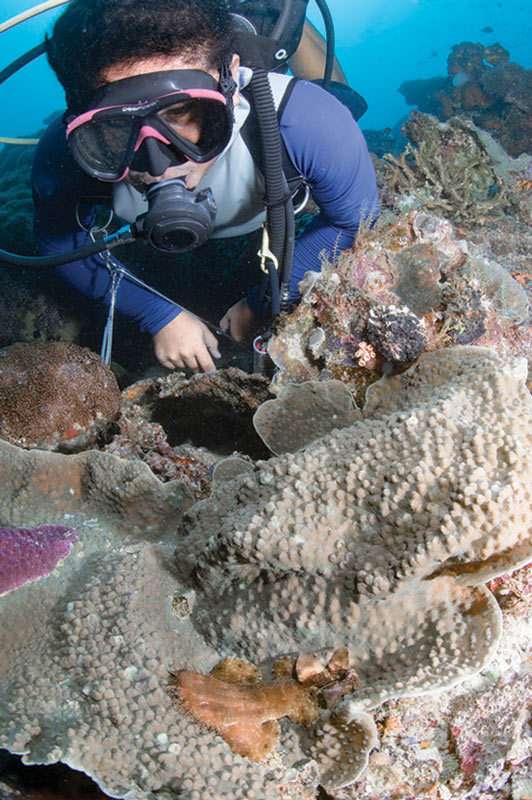 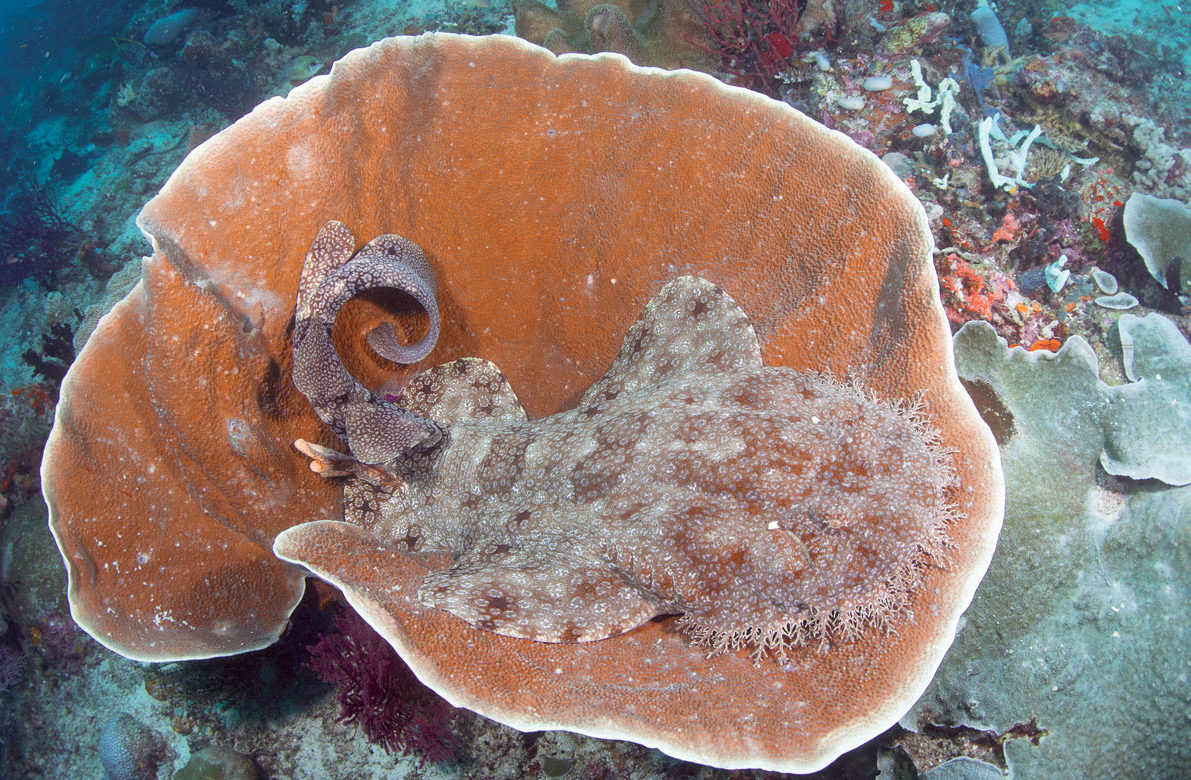 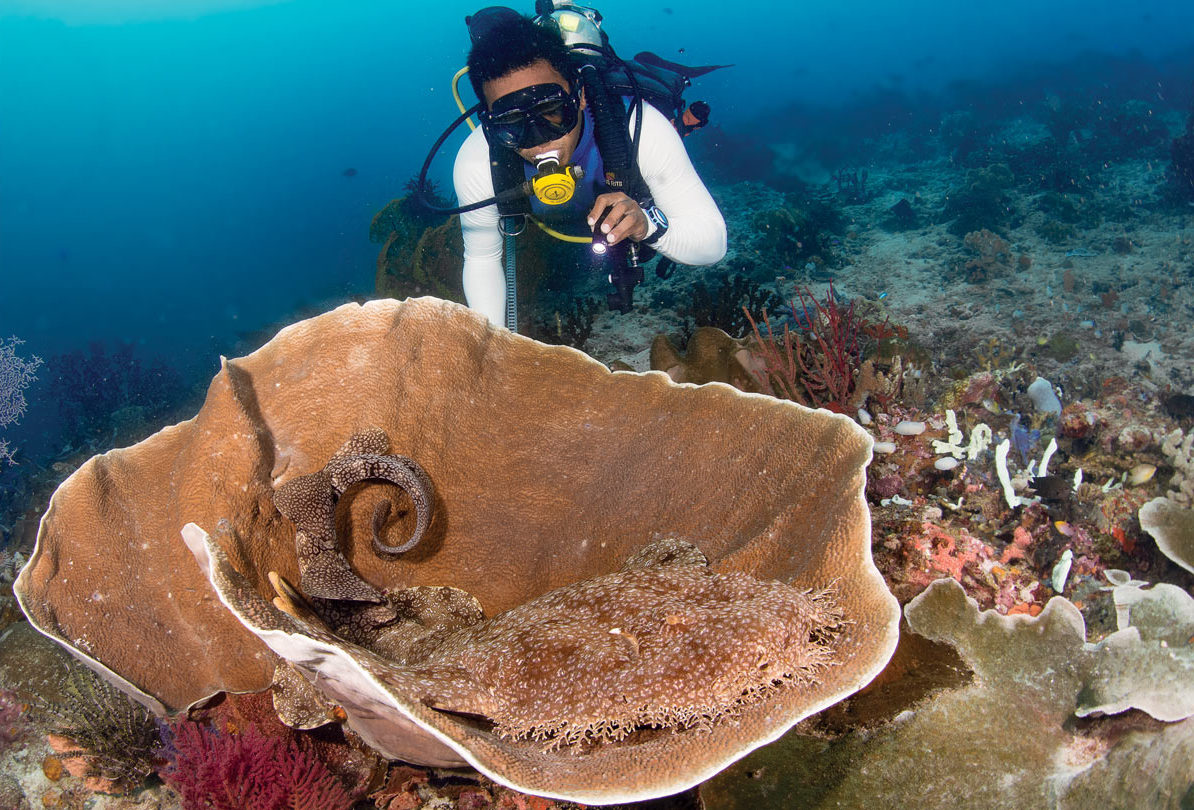