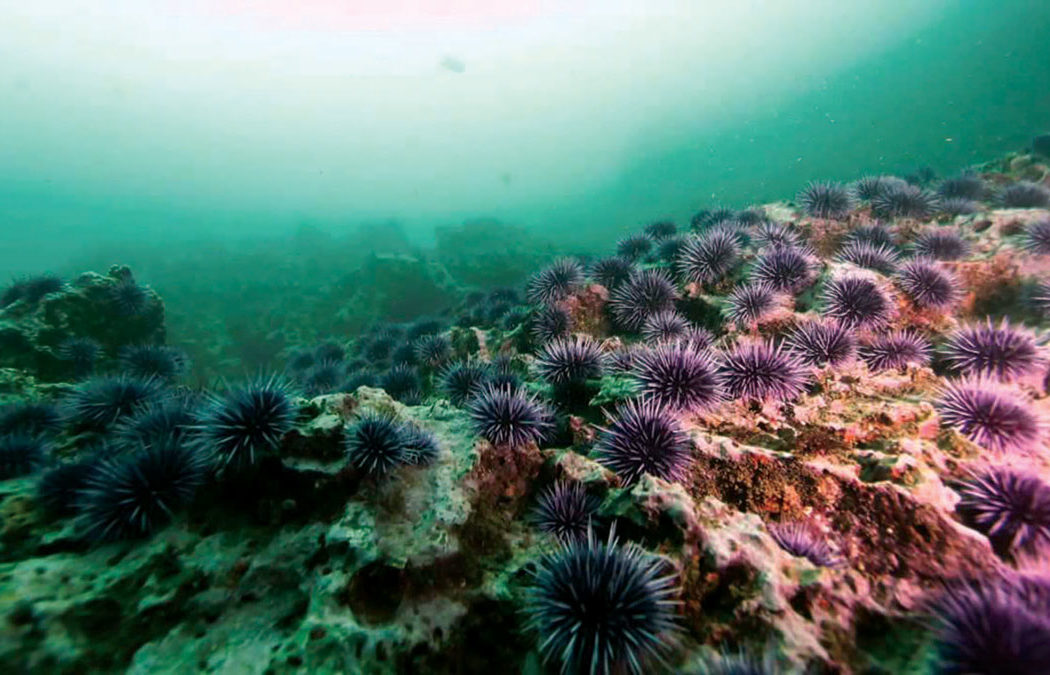 The “Domino Effect,” or chain reaction, is the cumulative effect produced when one event sets off a chain of similar events.

And so the story begins. In California in 2013 an unknown disease began killing millions of starfish of many different species, including the sunflower sea star. The sunflower sea star is the only real predator of a very hardy breed of echinoderm, Strongylocentrotus purpuratus or purple sea urchin. This sea urchin species, as the name suggests, is deep purple in color and lives in lower inter-tidal and nearshore sub-tidal communities. January, February and March function as the typical active reproductive months for the species and sexual maturity is reached when the urchins are around two years of age. The weather was just right for the purple sea urchins to have two excellent breeding years and, with no predator stress, the population exploded. Each of those baby urchins needed to eat and began eating everything in sight. Those tiny, growing urchins have already worked their way through the underwater kelp forests in California and are spreading north to Oregon. Along the way, they are sending the marine ecosystems off shore into disarray and causing many other species to starve to death. How could a creature that at maturity is only four inches (10 cm) in diameter cause this dilemma? By sheer numbers. Each urchin can live up to 70 years and may produce upwards of 500 million eggs in their lifetime. A recent count found 350 million purple sea urchins on one Oregon reef alone — more than a 10,000 percent increase since 2014. And in Northern California, 90 percent of the giant bull kelp forests have been devoured by the urchins. The kelp was especially vulnerable as it had already been struggling because of warmer-than-usual waters in the Pacific Ocean.

The devastation is not just ecological but it is also economic. Until now, red abalone and red sea urchins, a larger and meatier species of urchin, supported a thriving commercial fishery in both California and Oregon. But 96 percent of red abalone have disappeared from California’s northern coast as the number of purple sea urchins increased six fold, according to a study released by the University of California, Davis.

Last year, California closed its red abalone fishery, which poured an estimated $44 million into the coastal economy per year with 30,000 to 40,000 participants. And Oregon suspended permits for its 300 abalone divers for three years.

The clear-cutting of the kelp has created purple urchin barrens which, in turn, is creating a major economic issue for the commercial harvest of red sea urchin by fishermen. The fisherman sell the male and female gonads (testes and ovaries) as valuable “uni” in the sushi markets. The red urchin fishery is ranked in the top five in California by weight and value ($8.4 million in 2012).

Now the purple urchins have eaten themselves into starvation as well, but unlike other kelp-dependent creatures, the species can go into a dormant state, stop reproducing and live for years with no food. Because the urchins can go dormant, that means the only way to restore the ecological balance is to remove or destroy the purple urchins. Scientists estimate that in Oregon alone, it would take 15 to 20 years to remove all 100 million pounds (45 million kilograms) of purple urchins recently surveyed on just one large reef.

There are ways to stop this domino effect but they not are straight forward, inexpensive or easy. A group of conservationists, commercial urchin harvesters, scientists and private interests came together and developed an unusual plan. They propose paying underemployed red sea urchin divers to collect the shriveled, but living, purple sea urchins and transfer them to carefully tended urchin “ranches” to be fattened up for sale to seafood markets around the world.

And USC Sea Grant recently funded an urchin/kelp research project by The Bay Foundation — a non-profit environmental group focused on the restoration and enhancement of Santa Monica Bay and local coastal waters — to see if kelp forests can be restored. The barren rocks were restored to kelp forest stretching to the surface within a year to a year and a half after initiation. This project garnered support among environmentalists, marine scientists and local fishermen to move forward with a unique, cooperative, large-scale kelp forest habitat restoration in the region. To date, 39 acres of kelp forest have been restored by selective purple urchin removal.

Scientists are not yet sure if climate change is responsible for the sea urchin explosion, that in turn caused the decimation of the kelp and the loss of the kelp forests’ biodiversity, but they suspect it plays a role in the cascade of events that allowed the purple urchins to boom. What is sure is that this problem requires the collaboration of all segments of the research, commercial and dive communities to stop this domino effect in its tracks.