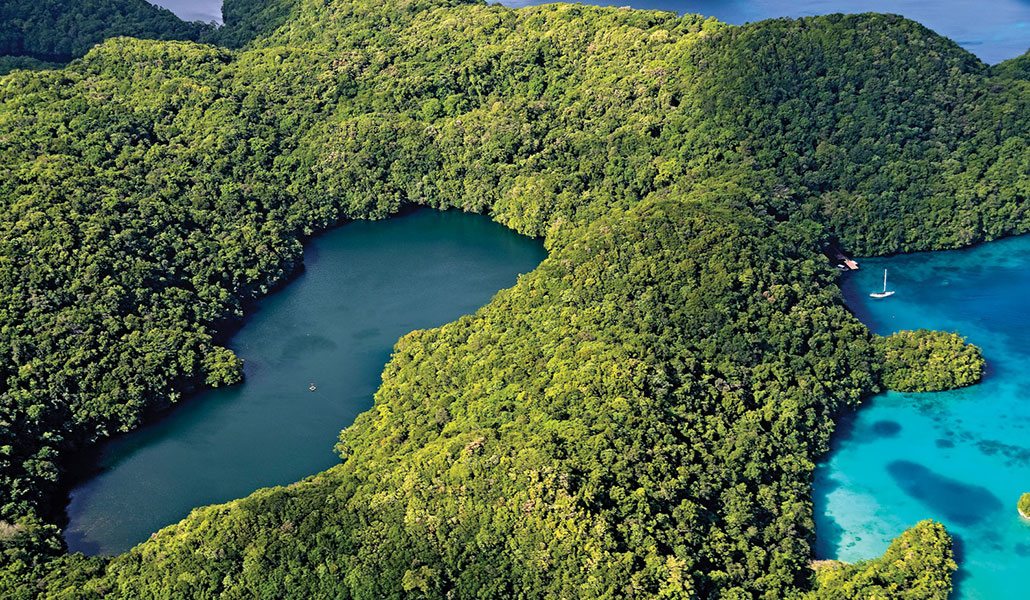 The refreshing, somewhat unnerving and awe-inspiring view through the open doorway of the wobbling Cessna 182 unveils Palau’s majestic Rock Islands. These mushroom-shaped remnants of ancient limestone coral reefs are topped with dense, lush forests and surrounded by richly saturated turquoise-to-cobalt-blue seas. As if on cue, a radiant rainbow appears before me to complete the picture-postcard setting. I extend my lens into the buffeting wind to try to avoid shooting the right wing and realize the rainbow is a perfect 360-degree circle. The rainbow’s treasures are these heavenly Rock Islands that epitomize the beauty and biodiversity of this secluded equatorial archipelago.

This island nation, which is home to more than 700 islands, atolls and islets, stretches over 435 miles (696 km), yet you would be hard-pressed to find it on a map of Oceania if you did not know where to look. Located about 7 degrees north of the equator in the West Caroline Islands of Micronesia, Palau, known locally as Belau, is well off the beaten path. It is located 460 miles (736 km) east of Mindanao, Philippines, 280 miles (448 km) southwest of Yap and 800 miles (1,280 km) southwest of Guam. And it is bounded by the Philippine Sea to the northeast and the North Pacific Ocean to the southeast.

In Harmony With The Sea

A study of Palauan ancestry reveals a people whose lives have been intricately linked to the sea from the onset. It was the sea that carried a mix of Malays from Indonesia, Melanesians from New Guinea and Polynesians from the South Pacific to the area prior to 1000 B.C. These original settlers established footholds on numerous islands and gradually developed complex social structures. Men traditionally went to sea to fish or fight, while the women stayed on land to care for the children, sick and elderly. Palauan fishermen realized the value of resource conversation long before the notion was made popular within the scientific community, as they seasonally banned fishing in known spawning areas.

Tribal life was and still is organized by maternal clanships. A council of chiefs representing the 10 community clans governs the village. The chiefs’ wives form a second council that governs the land and money, which means the men can make all the decisions they want, but they eventually have to ask the women for permission and money. There was no written language until the late 1800s, so storytelling played a major role in passing tribal history, lore, customs and knowledge from one generation to the next. An enduring appreciation and respect for the life-giving sea have been nurtured throughout the ages.

Little is known of Belau’s early history. The islands’ remote location kept it insulated from most of the rest of the world until the 18th century. Spanish explorer Ruiz Lopez de Villalobos discovered the islands in 1543, but later forgot the location. In 1696, two Yapese fishermen that washed ashore in the Philippines told Spanish priests about the Rock Islands. This led Francisco de Padilla, another Spaniard, to rediscover them in 1710. Great Britain, Spain and Germany alternately claimed Palau over the next 200 years. Smallpox and other foreign diseases had decimated an estimated 70 percent of the native population by the time the League of Nations awarded Palau to Japan in the post-World War I Treaty of Versailles on June 28, 1919. The Japanese profoundly influenced the Palauan culture and economic development, and the naval base they built put the islands in harm’s way a mere 25 years later.

Japan was forcefully expelled from the islands by the United States in World War II. The battle for Peleliu, an island 23 miles (37 km) south of the former capital of Koror, epitomized the fierce fighting and the exorbitant price paid by the combatants. More than 20,000 American and Japanese soldiers died there from September 15 to November 27, 1944, in a campaign originally projected to last only three days. The majority of the soldiers killed were under 20 years of age. Tanks, troop carriers and heavy artillery guns, as well as American and Japanese memorials, continue to serve as silent sentinels that visually testify to the blood that was shed for freedom.

In 1947, Palau was named as one of the six island districts within the United Nations Trust Territories, which incorporated the Caroline, Mariana and Marshall Islands and was under U.S. administration. Palau gained its independence on October 1, 1994, by signing the Compact of Free Association with the United States. This 50-year agreement provides the republic with protection, immigration and economic benefits and allows the United States to maintain a strategic presence in the region.

The dynamic erosion that sculpted the picturesque Rock Islands also created their precious marine lakes. These saltwater lakes are connected to the sea through cracks in the surrounding porous limestone. Water and microscopic organisms are channeled to and from the lakes through these natural conduits. Each of the more than 70 lakes has evolved independently of one another and thus contains a unique collection of flora and fauna.

Tourists flock to Jellyfish Lake (Ongeim’l Tketau), the only lake open to the public, for the chance to swim with millions of “friendly” jellyfish. Golden jellyfish (Mastigias papua etpisoni) swarm en masse during the day to migrate with the sun’s rays to maximize the photosynthesis within symbiotic algae they host. The algae produce sugar that helps feed their landlords and, in return, the jellyfish provide room, protection and transportation.

The golden jellyfish used to be incorrectly or deceptively described as stingless. The jellies can sting, but the sensation is nearly undetectable by humans. Perhaps practically stingless is an accurate description. Jellyfish Lake is a snorkeling-only activity because scuba bubbles can damage the delicate jelly bodies. The dangerous concentration of hydrogen sulfide below 45 feet (14 m) also is a reason. The 1,510-foot (458 m) daily migration gives snorkelers ample opportunity to carefully dance with the ethereal, pulsating jellies. 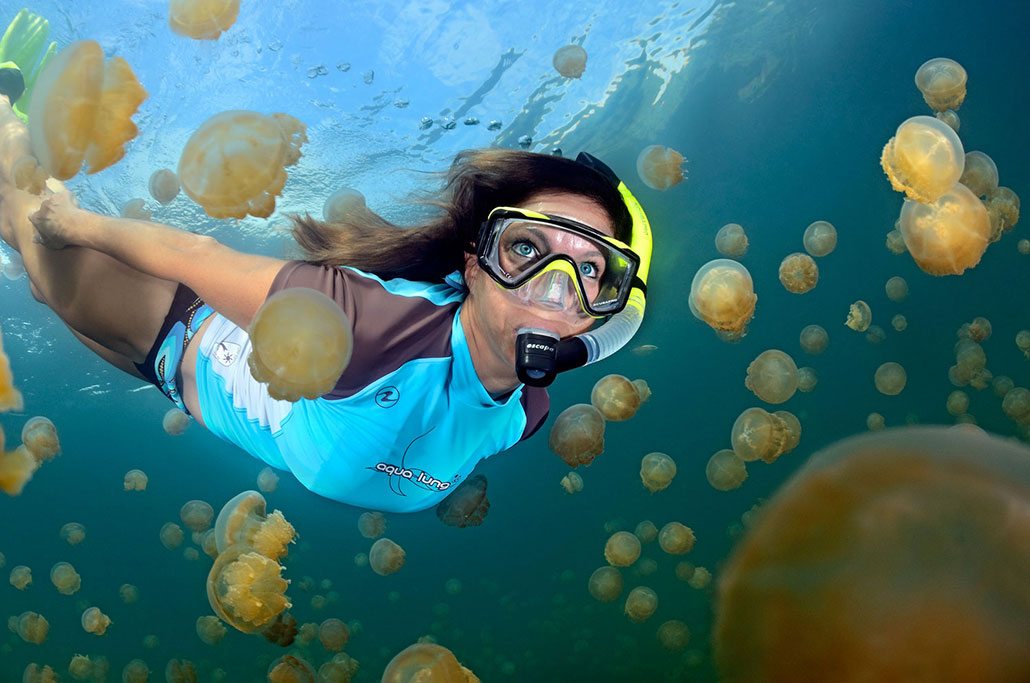 The Palauan archipelago is the hotspot for biodiversity, particularly marine biodiversity, in Micronesia. More than 1,350 species of fish and 650 species of coral are found here. The North Equatorial Countercurrent (NECC) carries larvae and nutrients from the Coral Triangle, an area of 2.3 million square miles (5.8 million sq km) that encompasses Indonesia, Malaysia, Papua New Guinea, the Philippines, the Solomon Islands and Timor Leste, to continually seed, feed and replenish the healthy Palauan marine habitats. Seagrass beds and mangroves serve as vital nurseries for the arriving larvae.

The Palau government has followed the lead of the wise Palauan ancestors by legally protecting spawning grounds. It has also launched numerous critically acclaimed laws and programs, such as establishing the world’s first shark sanctuary and marine protected areas (MPAs) that cover almost 45 percent of the nearshore habitats. These governmental initiatives supplement the typographical features that protected the heart of the nation long before the arrival of humanity. An extensive barrier reef system surrounds the main islands from the northern tip of Babeldaob Island, through the southern lagoon and then merging with Peleliu’s fringing reefs in the south. The barrier reef is continuous for 90 miles (144 km) along the western flank of the system and less developed to the east. In total, there are more than 200 square miles (520 sq km) of barrier, fringing and patch reefs in Palau.

The diving and snorkeling options are plentiful for all skill levels, as are the available service providers. The best sites are regularly visited by both live-aboards and land-based tour operators. The water is warm year-round, so a tropical-thickness wet suit should suffice. 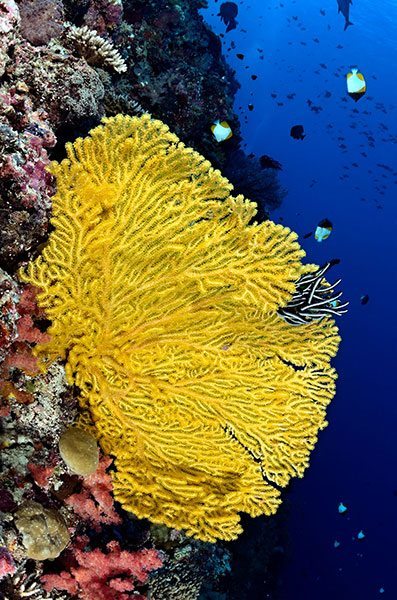 If you feel the need for underwater speed, you will be thrilled with Palau. The barrier reef system that protects the main islands also restricts the ingress and egress of the tides to a few channels. The result is six hours of incoming and then six hours of outgoing water that tremendously affects the associated dive sites, particularly Blue Corner, Ulong Channel and the Peleliu Express. You simply cannot reliably or safely visit these sites without the knowledge and skills of local guides. They are a necessity, not a luxury. For example, if you hit the sites on a waning or slack tide, you will wonder what all the fuss is about. The marine life may seem underwhelming and the overall experience sedate. If, however, you visit them at the height of the tidal flow, you will quickly plant a reef hook along the rocky ledge or be swept through living walls of fish. When diving in currents and particularly when deploying a reef hook, listen and follow your guides’ instructions.

Blue Corner ranks among the best of Palau’s “happening” dive sites. Divers flock here to watch sharks surf the current, have Napoleon wrasse (Cheilinus undulatus) the size of small billboards comically stare them down and gawk at the massive schools of marine life grandly displayed before them. I think the fish, particularly the Napoleons, and turtles show up simply to laugh at the astonished divers, who are fluttering at the end of nylon ropes like weird parade floats or kites.

My wife Lauren and I prefer Ulong Channel when the action is right. The corners at Ulong Channel offer the same general “hook and look” opportunities as Blue Corner, but a dive through the channel itself can be borderline insane. I still shake my head and chuckle whenever I remember our guide telling us to look for the giant, 100-year-old tridacna clams in the channel just before our initial visit. We hit the channel during a 3- to 4-knot current. The clams would have needed to be the size of elephants and flashing like neon signs for us to recognize them in the passing blur of seascape. It was the most thrilling 15-minute dive of our careers. A return visit during slack tide allowed us to leisurely putter along and check out the ginormous clams. It also helped us appreciate the importance of having knowledgeable guides.

The Peleliu Express is another of Palau’s thrilling submarine raceways that should be on every diving adrenaline junkies’ itinerary. The currents are less predictable here as two bodies of water, the North Pacific Ocean and the Philippine Sea, meet. You can, quite literally, enter one ocean and then exit another on the same tank of air. More pedestrian dives around Peleliu give you the chance to spot used artillery rounds and other relics from the Battle of Peleliu.

I am not normally a cave or cavern aficionado. Yet, even in this regard, Palau won me over. The Blue Holes, the next-door neighbor to Blue Corner, and Chandelier Cave are worth repeating time and time again. The plunge into one of these holes can be disorienting as you abruptly transition from bright sunlight into the darkness of a massive chamber that bottoms out at 130 feet (39 m). Once your eyes finally adjust to the limited light, you can see a small window in the side of the cavern at 16 feet (4.8 m) and a much larger exit at 89 feet (27 m).

Chandelier Cave is a shallow cave network composed of five discrete and contiguous chambers. The first four chambers are crowned with air pockets and the last is completely above water. The site is named for the stalactite and stalagmite formations that resemble glittering chandeliers. Besides, Chandelier Cave sounds more inviting than Wicked Teeth Cave, though either name is an apt description.

Babeldaob is the largest and tallest island in Palau. Though it is mostly undeveloped, Babeldaob is the home of the new national capital of Ngerulmud and Roman Tmetuchl International Airport. This volcanic island also offers dense forested canopies, dramatic waterfalls, a saltwater crocodile farm and a highway that connects it to the state of Koror, which includes the Rock Islands and is the hub for tourist activity, via the Koror-Babeldaob Bridge. A Cessna or helicopter ride over Babeldaob and Koror will offer breathtaking, panoramic vistas, but it cannot replace a closer, more intimate investigation. A hike to the Taki Waterfalls, a small boat ride among the Rock Islands and, of course, the diving will help you appreciate why Palau was named “one of the last Living Edens” by PBS.

Story and photos by Scott Johnson 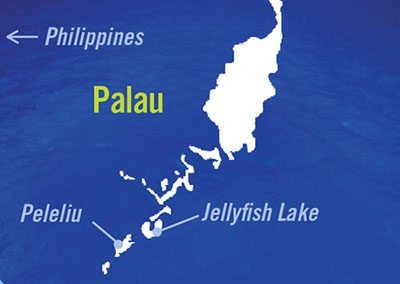