The first time I visited the east coast of Mexico’s Yucatan Peninsula was in the early 1970s. At that time the region was best known for its long, isolated stretches of white-sand beaches and the many accomplishments of the ancient Mayan civilization. While the diving was nothing short of fantastic, to enjoy it you had to travel completely self-contained, taking everything with you including an air compressor and tanks. Tourists were few and the now-famous resort area of Cancun was little more than a sandbar.

A building boom during the mid-1980s transformed the Yucatan’s east coast. The region became the fastest-growing part of Mexico and the economy thrived as Cancun and areas south literally became a real-life ruins-to-riches story. Today, it is known for its beautiful beaches, world-class restaurants, theme parks and outdoor activity centers offering everything from scuba diving to archaeological site tours, discos, shopping, spas and more.

The land of the modern-day state of Quintana Roo where Cancun is located shares a history with much of the greater Yucatan where for many centuries before the arrival of the Spanish, the Yucatan Peninsula was the homeland of the Mayan civilization. Speaking in broad terms, the Mayan nation was a homogenous group of people who occupied the same area for thousands of years, but that lacked central leadership. They perfected a highly accurate calendar, developed a hieroglyphic writing system, and built complex, ornate temples and other structures, many of which remain standing today. The golden age of the Mayan civilization is believed to have lasted for roughly five centuries from A.D. 300 to A.D. 800. For reasons that still puzzle modern archaeologists, the Maya became separated into competing states that were easy victims for invading forces over the next several centuries, including the Toltecs and later Spanish conquistadors.

The conquest of the Yucatan by the Spanish began in the early 1500s. In 1517, Francisco Hernandez de Cordoba of Spain sailed from Cuba looking for slaves. Some Maya greeted the Spaniards with open arms and offered to trade goods, while others openly waged war.

During the mid-1520s Francisco de Montejo established a Spanish stronghold in the region. Some 20 years later, his son, Francisco Montejo the Younger, gained control over the peninsula. Several Mayan states pledged loyalty to Spain, but uprisings continued for centuries.

In the 1840s the Maya regained control of the region and the independent Mayan nation of Chan Santa Cruz was established. The Mexican government had little control over the region until the early years of the 20th century.
Quintana Roo was made a territory of Mexico in 1902 and the Mexican army defeated the Mayan population during the decade from 1910 to 1919. In 1915 the area was declared to be part of the state of the Yucatan. In 1931 the territory of Quintana Roo was again separated from Yucatan.

Quintana Roo was granted statehood within the United Mexican States on October 8, 1974, and is Mexico’s youngest state. 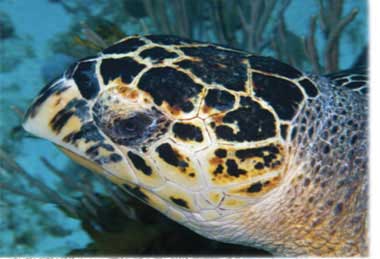 A variety of diving experiences are available from Cancun. They include relatively short boat rides to nearby reefs just offshore, inland trips to freshwater cenotes tucked into the jungle south of the city, and all-day affairs that take divers to explore the walls of neighboring island Cozumel.

Cancun’s local diving is known for sightings of tropical reef fishes and myriad invertebrates that inhabit the region. The bottom is fairly flat with a number of invertebrate-encrusted mini-walls that rise upward from the seafloor, providing marine life places to thrive. The diving is usually relatively shallow, with the seafloor between 45 and 60 feet (14 and 19 m) deep, making it ideal for beginning divers. Because some current is common, “live boating” is the norm; divers literally “go with the flow” and the boat follows along.

Almost all of the diving in Cancun is done from boats. Some operators provide bus service to and from local hotels, but others expect divers to take care of their own transportation.

The underwater visibility varies, too. Cancun’s offshore reefs generally have about 40-60 feet (12-19 m) visibility, which is perfect for reef exploration with a group. Those who venture to Cozumel for its wall diving can expect visibility in the 70- to 100-foot (21- to 30-m) range. In the crystal-clear freshwater cenotes it’s even better, often exceeding 100 feet.

Derived from the Mayan word D’zonot, meaning sacred well, the word cenote (see-NO-tay) is the Spanish name given to a type of freshwater-filled limestone sinkhole. Cenotes provide entry and exit points for divers who want to explore a number of underground river systems in the Yucatan where freshwater pools connect to submerged caverns and to other cenotes. These cenote systems are legendary for their spectacular formations of stalactites and stalagmites as well as the amazing clarity of the water. Extending for miles, two of the cenote systems found in the jungle near the ancient city of Tulum comprise the longest underwater cave systems on Earth.

The appeal of cenote diving centers on the unique topography and scenery. However, other benefits include the fact that diving conditions are not affected by most weather, the currents are barely discernable and the visibility is superb. The water temperature tends to be a fairly constant 77 degrees Fahrenheit (25 degrees Celsius), however thermoclines where the temperature varies significantly between adjacent bands of water are common as are haloclines where the visibility is greatly reduced and impaired because of the mixing of fresh water and salt water.

Divers of all experience levels and in some areas, snorkelers too, can experience cenote diving under the supervision of a qualified local guide. Some cenotes are limited to those with advanced training such as cavern or cave diving certification. This type of training is available at many local dive centers.

Mexico’s largest Caribbean island, Cozumel lies only 12 miles (19 km) off the east coast of the Yucatan Peninsula. A trip to Cozumel from Cancun involves taking a taxi or bus (usually operated by a Cancun dive shop that also has a facility and personnel on Cozumel) to Playa del Carmen, and then taking a 45-minute ferry ride to Cozumel. Dive boats are docked nearby.

A Cozumel diving day usually includes two dives and lunch on a beach or in the town of San Miguel at a local restaurant before boarding a ferry for the return trip. The day can be a lot of fun, especially for those who go in a small group and who can make the travel and meals as much fun as the diving.

Cozumel’s reefs teem with life, and the dive sites vary from relatively shallow, mostly flat bottoms with moderate relief to places where massive coral heads rise high off the seafloor in dramatic fashion to spectacular sheer walls that drop off into the depths of the Caribbean. A moderate-to-strong current is common at many sites, and drift diving is the norm. Divers are advised to carry an inflatable safety sausage and other surface signaling devices.

Other Activities In and Around Cancun

In recent years Cancun has made a major effort to transform itself from a “party spot” into a family-oriented destination with fun for everyone. It’s easy to arrange for some water skiing, Jet skiing, or parasailing in the ocean or to go kayaking in the Nichupte Lagoon that lies between the hotel zone and the mainland. You also have the option of snorkeling, deep-sea fishing or going on an undersea ride in an Atlantis submarine. A short excursion in a breathing observation bubble (BOB), a personal underwater scooter with an observation helmet and a self-contained air supply, can be a good way to introduce the nondivers in your party to the underwater world and the possibility of learning to scuba dive.

On other days you might want to go horseback riding along the beach, take an all-terrain vehicle trip through the jungle, or rent a Jeep and see the sights on your own. And those who need their golf fix have plenty of options as well.

A strong Mayan influence can be seen and felt throughout Cancun and the state of Quintana Roo, and for anyone with an interest in history and other cultures, a visit to see historical ruins is a “must do.” For more than 1,000 years Xcaret was one of the Maya’s most important ceremonial centers and seaports. Today it is a beautifully developed echo-archaeological park where you can discover both historic and natural wonders.

Getting pampered at a world-class day spa and going shopping for local handicrafts appeals to some area visitors. There are in excess of 2,000 commercial outlets throughout the hotel zone and downtown.

The quaint island of Isla Mujeres is only a 40-minute ferry ride across Cancun Bay. Island visitors can enjoy the Dolphin Discovery park featuring programs that allow you to swim with and learn about dolphins, and to join a guided snorkeling tour on a local reef. Dolphin swims are also offered at the eco-parks at Xcaret and Xel-Ha.
There is no need for the fun to stop when the sun sets in Cancun. In the evenings you can dance up a storm at world-class discos, relax at live salsa and jazz clubs, enjoy ballet folkloric shows in beautiful theaters, go on a dinner cruise, witness historic presentations at nearby theme parks and much more. Caribbean and traditional Mexican performances can be enjoyed at Teatro de Cancun, and an even more exotic show is performed in the theater at Xcaret where a cast of 250 musicians, performers, and athletes entertain the evening crowd.

Whether you’re looking for adventure above or below the surface, in fresh water or salt, on the beach or deep in the jungle, you can get there from Cancun.