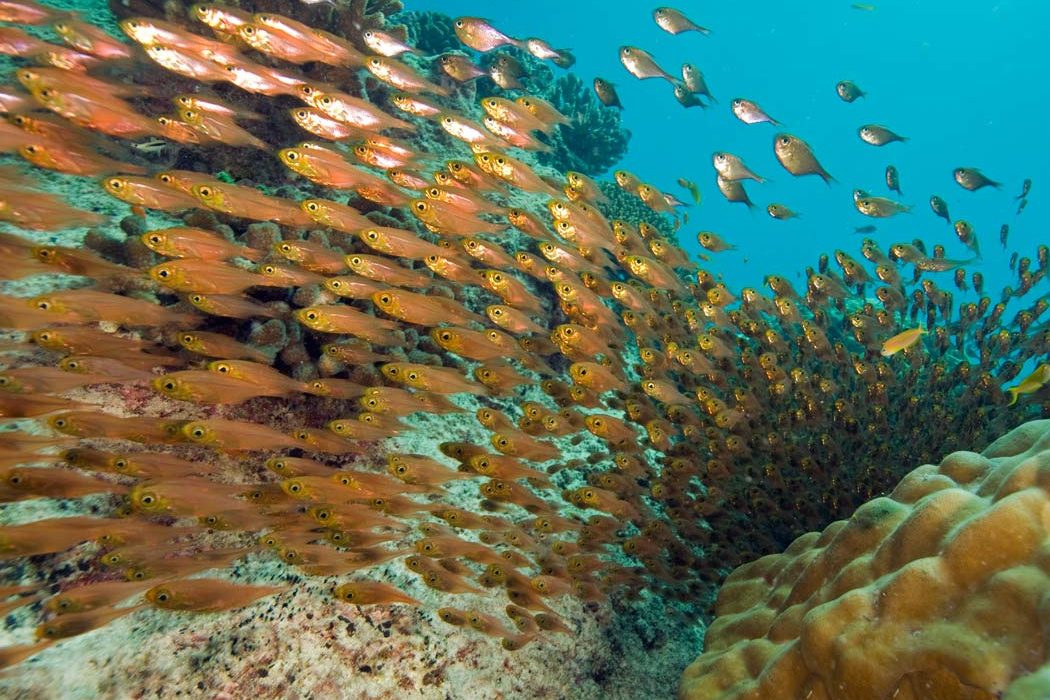 In the marine world, one of the fundamental challenges for many creatures is to eat and not get eaten. Early on in life most children learn that a variety of very capable apex predators such as killer whales, sharks and barracudas roam the world’s oceans and that the oceans can be a dangerous place for animals that drop their guard.

But as we grow older and learn more about the oceans and marine wildlife it becomes obvious that there are a lot more marine creatures that are not top-end predators, yet their species continue to flourish. For any species to thrive over long periods, sufficient numbers of them must live long enough to reach adulthood and reproduce. For this to occur those animals must be able to defend themselves from the onslaught of marine predators that would like nothing more than to have them for their next meal.

In this piece I will examine some of the ways that various species of fishes defend themselves in a world filled with a variety of very capable predators.

Schooling is one of the primary ways many fishes help defend themselves from predators. About 80 percent of all fish species school as juveniles and roughly 20 percent school as adults. Many ichthyologists say that the concept of “safety in numbers” plays a fundamental role in schooling behavior. The adage “big fish eat little fish” is generally true, so to overcome the problem caused by their diminutive size, many small fishes gather in schools. It is believed that the schools look like a single large creature, and many predators tend to leave large animals alone.

Another aspect of the “safety in numbers” theory revolves around the fact that even if a predator attacks a school, the odds are low that any one fish will be the one the predator captures. In essence, each member of the school operates under the premise that it is safer hiding among the school than it is to roam the waters alone.

In a school each fish near the edge of the school serves as a lookout, thus helping to protect the rest of the school. Many schooling fishes are able to quickly react to the escape reaction of other fish, at least in part because of their lateral line system. Specialized receptors that run along the sides of the body can detect minute changes in water pressure that might be caused when another nearby fish suddenly changes speed or direction. Anyone who has watched schooling fishes has seen the amazing speed with which all of the fish in a school can seemingly simultaneously react to the sudden movement of animals nearby.

Many fishes rely heavily upon their ability to blend into their surroundings so their presence might go undetected by predators. Certainly this is the case for flatfishes such as halibut, flounders, turbots and soles. These fishes are masters of the art of cryptic color as they routinely alter the hue and pattern of their skin to closely match that of their surroundings. These fishes also often bury themselves in sand to further disguise their presence. Other species such as sculpins and scorpionfishes can also alter the color and pattern of their skin to resemble the surrounding reef or seafloor. In addition, the bodies of many sculpins and scorpionfishes are adorned with numerous fleshy appendages that break up their outline and help them blend with the seafloor and other nearby organisms.

In California waters giant kelpfish do an amazing job of altering their color and patterning to blend with the aquatic algae known as kelp. But when it comes to looking like and blending with kelp, Australia’s leafy sea dragon is the clear winner. This master of camouflage looks like kelp that has fins, eyes and a snout.

Countershading is another oft-used form of camouflage. A wide range of species including a variety of smaller mackerel as well as larger fishes such as manta rays have dark backs and whitish bellies. When viewed from above, their darkly hued backs help them blend with darkly hued bottoms or with the darkness of the abyss below, while their whitish underbellies help them blend with more lightly hued surface waters when seen from below.

Colors and patterns that break up the outlines of fishes serve as yet another form of camouflage. Vertical bars on the bodies of fishes are a common pattern often associated with fishes that live in or near beds of aquatic plants. The vertical stripes blend with the vertical orientation of the plant stems, making the fishes hard to distinguish. Dark lateral bands running along the sides of many fishes are often seen in schooling fishes. Specialists theorize that the bands appear to run together, making it difficult for predators to distinguish one fish from the next.

Reaction time and speed are extremely valuable assets for any fish trying to escape a predator. While most people tend to think of sharks as predators they are also prey, especially when they are young and small. A burst of speed from a juvenile lemon shark, blacktip, blue or other species helps these fast swimmers escape predation from larger members of their own species as well as other sharks and fishes such as large sea basses that would like to consume them. The same is true for small tunas, jacks and mackerels, species that use their swimming speed both when hunting and when being hunted.

Many reef fishes are highly maneuverable, a characteristic that enables them to move quickly within the tight confines of reef communities. In addition, thin-bodied species such as angelfishes and butterflyfishes can quickly slide into hiding places when danger threatens.

Sticking it to ’Em

A variety of fishes use numerous sharp spines and armored scales to help fend off predators. By swallowing a lot of water when alarmed, balloonfishes and pufferfishes can inflate their bodies, erecting a number of very sharp spines. The rigid and sharply pointed spines give an attacker an unpleasant mouthful of “nails and needles” instead of an easy meal.

Surgeonfishes are named for the strategically placed, often brightly colored, scalpel-sharp spines near the base of their strong tail. Those spines and a quick beat of the tail can inflict serious injury to any predator. The bright color of the spines serves as a “don’t mess with me” warning sign.

A number of relatively small reef sharks including the horn sharks, Port Jackson shark and crested bullhead possess a sharp spine toward the front of their dorsal fin. In younger animals the spines are especially sharp, and when erected make an unpleasant surprise for an attacker such as a large sea bass or angelshark. Triggerfishes are also equipped with a strong dorsal spine. Instead of using this spine to inflict injury, they erect the spine to help wedge themselves into tight cracks and crevices in reef communities, preventing predators from pulling triggerfishes out of their holes.

While not armed with sharp spines, boxfishes and sea horses possess armored scales that harden their bodies, making it more difficult for an attacker to injure or capture them. The same is true for a variety of catfishes, many of which also possess sharp spines.

Stingrays, as many beach users know all too well, are equipped with one or more knifelike barbs on their tails near the base. Capable of injecting powerful venom, these barbs can inflict painful injuries to animals that try to harm the rays.

Scorpionfishes, lionfishes and stonefishes are equipped with a pair of poison glands at the base of each of their many pectoral spines. When threatened these species can quickly lunge forward and use these spines as venom-injecting needles to repel threats. The reef stonefish is thought to be the most highly venomous fish in the world.

More than 50 species of flyingfishes use their ability to glide above the surface of the ocean to escape predators such as tunas, billfish, sea lions, dolphins, sharks and more. Flyingfishes are able to “jump” out of the water and then glide through the air over considerable distances. When spread while airborne, their greatly enlarged pectoral creates an airfoil similar to an airplane wing providing lift and enabling these fishes to glide. Those species that have four “wings” also have enlarged pelvic fins that provide additional lift.

Once flyingfish break the surface they spread their fins and beat their tail. The enlarged lower lobe of the tail works like an outboard motor with the sideways motion of the tail enabling the fish to gain height and extend the duration of the flight. Flyingfish can glide for at least 325 feet (100 m), and they are occasionally seen as high as 10 feet (3 m) above the surface.

Many fishes, including tilefishes, a variety of gobies and jawfishes, reside in self-made burrows to where these fishes retreat when they detect danger. In some cases the burrows are rather elaborate and have several entrances and exits meaning that a predator cannot just watch one opening and be ensured of cornering its prey.

Razorfishes don’t require a burrow. They can quickly bury themselves in sandy bottoms. A variety of eels such as snake eels and cusk eels are also adept at quickly burying themselves in sand to escape harm. Many blennies live in sponges or in the vacated shells of barnacles and mollusks. These small living quarters provide the blennies with superb places to retreat when the need arises.

In comparison with other rays, electric rays are not fast swimmers. Nor are they armed with barbs like stingrays. But they are far from defenseless. As their name suggests, electric rays are equipped with specialized electricity-producing organs that can unleash powerful electric shocks that help these rays protect themselves and stun prey. The rays do not have to come into contact with the creatures they shock. They just need to be sure the creature is within the electrical field created when a ray unleashes a jolt of electricity. Electric rays cannot use their electricity-producing ability frivolously. It takes time for them to store more electricity and in the interim might have trouble warding off another attack.

Fishes employ a variety of techniques and strategies to defend themselves. Learning about the ways fishes protect themselves provides valuable insight into the inner workings of the world’s oceans, rivers, lakes, ponds and streams.