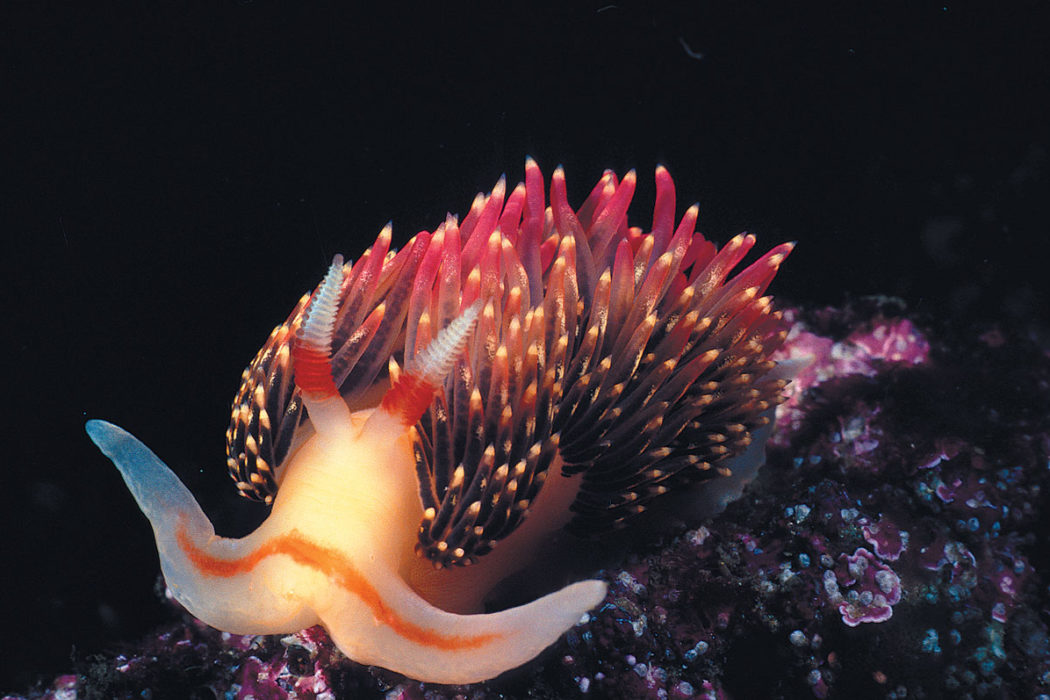 Extremely colorful and standing out in their surroundings, nudibranchs seem to be easy prey. However, various species of nudibranchs secrete noxious chemicals that repel predators. Photo by Marty Snyderman.

Somewhere around the time most of us began to see cartoons on television we became aware of the hunting skills and fierce reputations of some of the oceans’ more notable predators, creatures such as great white sharks, tiger sharks, killer whales, giant squid and barracudas. As we grew older and our knowledge of marine life expanded we became aware of hundreds of other species that survive alongside the oceans’ “biggest and baddest,” and we realized that creatures lower on the food chain do not live their lives completely at the mercy of the appetites of the top-end predators. Every species has its own bag of survival tricks — adaptations that empower at least some members of each species to live long enough to reproduce before ending up in the bellies of predators in the real-life game of staying alive.

As you spend more and more time diving, you will inevitably learn about the natural history of various marine creatures you encounter, and you will become increasingly aware of the amazing variety of adaptations they use to avoid predation. Even though there are far too many predator-avoiding methods to list, much less discuss in a single article, learning the ways that marine animals avoid predation will help you gain insight into the lives of the many creatures you are likely to see when you dive.

Let’s start by examining some methods fishes use to avoid predators. Many fishes, a group that includes silversides, mackerels, anchovies, herrings, tunas, jacks and snappers, and many other species, live in large schools. Several theories support the advantage of schooling. First, there is the concept of safety in numbers, meaning that the odds of a single fish getting captured by a hungry predator are less when a fish schools than if that same fish swims alone in a predator-filled sea. Many specialists suggest that a position nearest the center of a school maximizes the protective benefit of schooling. Second, in schools there are a lot more eyes and other sensory systems on the lookout for possible predators. Third, some specialists also believe that a school might be seen by some predators as a being bigger than the predators. Attacking a single creature that appears to be as big as the school would mean taking too big of a risk. 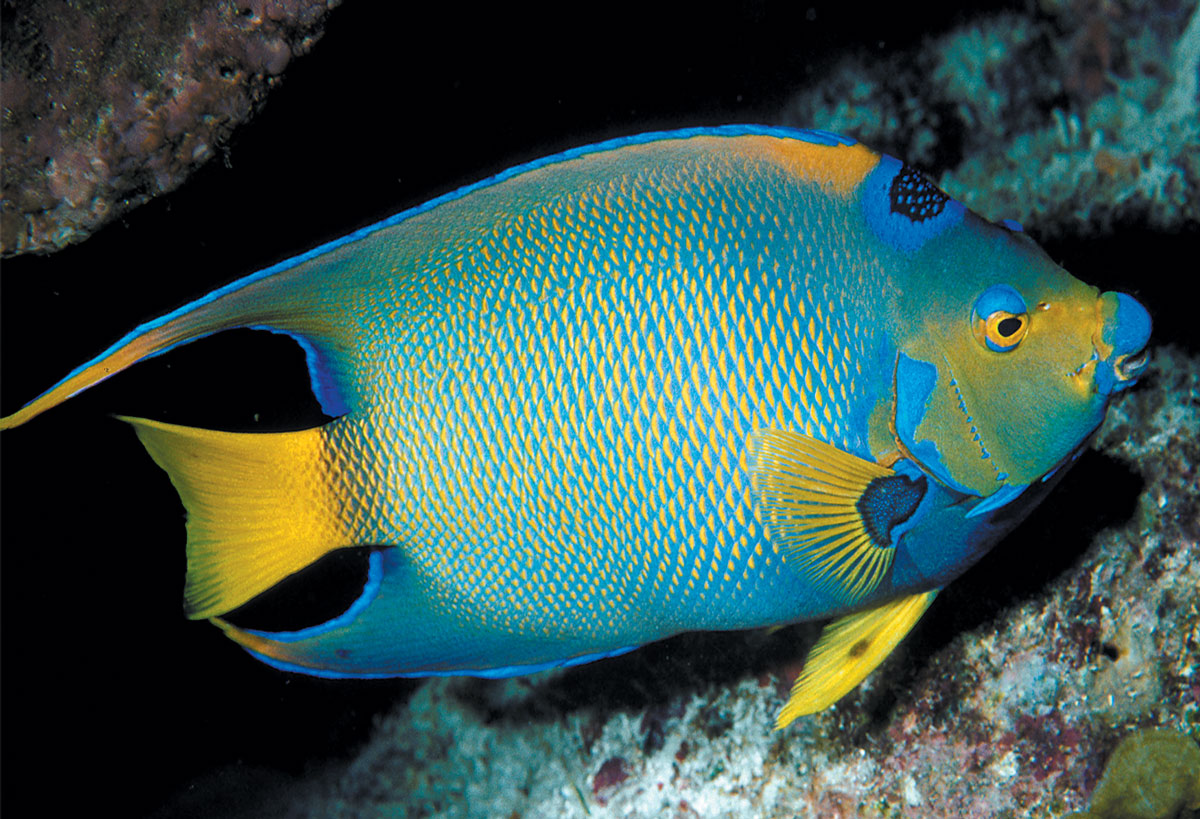 When danger threatens, thin-bodied species such as angelfishes can escape into the narrow cracks and crevices of reefs. Photo by Marty Snyderman.

Of course, not all fishes live in schools. Solitary species use other ways to help them avoid predators. For example, when danger threatens thin-bodied species such as angelfishes and butterflyfishes, their thin bodies allow them to escape into the narrow cracks and crevices of reefs, places that their thicker-bodied predators cannot enter. When feeling threatened, razorfishes disappear into the sand, while species such as jawfishes, tilefishes and a variety of blennies seek shelter in their self-made burrows.

Flatfishes such as flounders, halibut, turbots and sanddabs camouflage themselves to go sight unseen by predators and prey alike. These amazing creatures use cells in their skin known as chromatophores to help them match the hue and pattern of their surroundings with remarkable accuracy.

Other masters of camouflage, such as sculpins and stonefishes, use their coloration, patterning and facial appendages to blend with their surroundings. Frogfishes and leaffishes can resemble their surroundings and sit almost motionless for long periods, enabling them to go undetected.

The greatly flattened shape of rays, skates and sharks such as angelsharks helps them blend with the substrate. Many flattened animals bury themselves in the substrate at times to go undetected by predators and prey alike.

When frightened, balloonfishes and pufferfishes swallow water and inflate their bodies, increasing their apparent size and erecting numerous sharp spines that deter many potential threats. Some smaller fishes, such as horn sharks and Port Jackson sharks, possess sharp spines next to their dorsal fins that can be raised to puncture the mouths of animals that try to bite them. The spines of the juveniles are considerably sharper than those of the larger adults, and the juveniles are often spit out to live another day by predators that mistake them for an easy meal.

Triggerfishes use a modified triggerlike dorsal fin to help them lodge into crevices when danger is present. Their dorsal fin contains three spines with the most forward being the largest. When the first spine is erected during a moment of fear, the second spine moves forward to “lock” the first spine into position, and the fish positions itself in a way that the erect spine prevents it from being pulled out of its hiding place.

Spines in the dorsal fins of scorpionfishes and stonefishes enable these fishes to deliver a painful, and in some cases toxic, puncture wound to would-be predators.

The beautiful species commonly called lion or turkeyfishes are close relatives of the stonefishes and, not surprisingly, they too are armed with a venomous defense system. Being slow to give ground when approached and rather belligerent by nature, these fishes can inflict potent, poisonous stings with their long, dorsal spines. 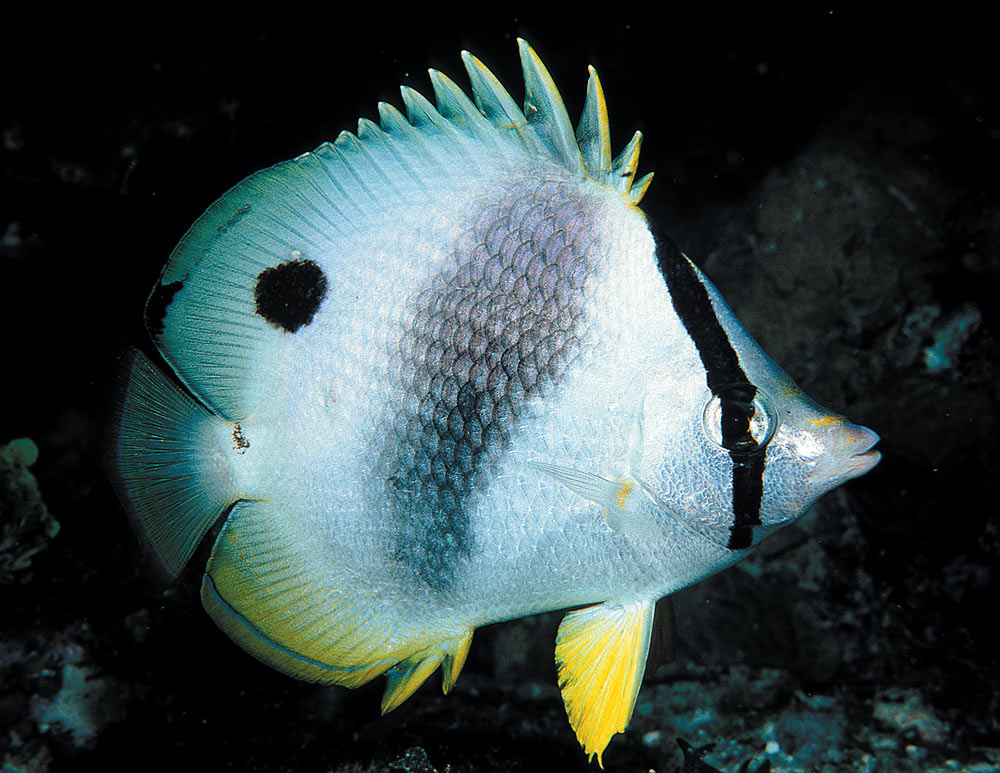 Some butterflyfishes use a false eyespot to fool predators. Photo by Marty Snyderman.

Many species of parrotfishes are wary and very difficult to approach during the day. At night, however, they enter a sleep-like state known as torpor, zonking out on the sea floor. Sometimes they squeeze into cracks or crevices, but amazingly members of several species routinely “sleep” out in the open inside of self-spun cocoons created from the combination of sand and their own mucus. The cocoons are believed to mask their odor, preventing predators such as moray eels that rely upon their olfactory system to find prey from detecting their presence.

Fishes known as sharksuckers, remoras and many other small fishes either attach themselves or swim close to a larger animal such as a shark, turtle, grouper or barracuda. The idea here is that no other predator is likely to come close to their large predatory host, so these relatively small fishes only have to keep a watchful eye out for a single predator. 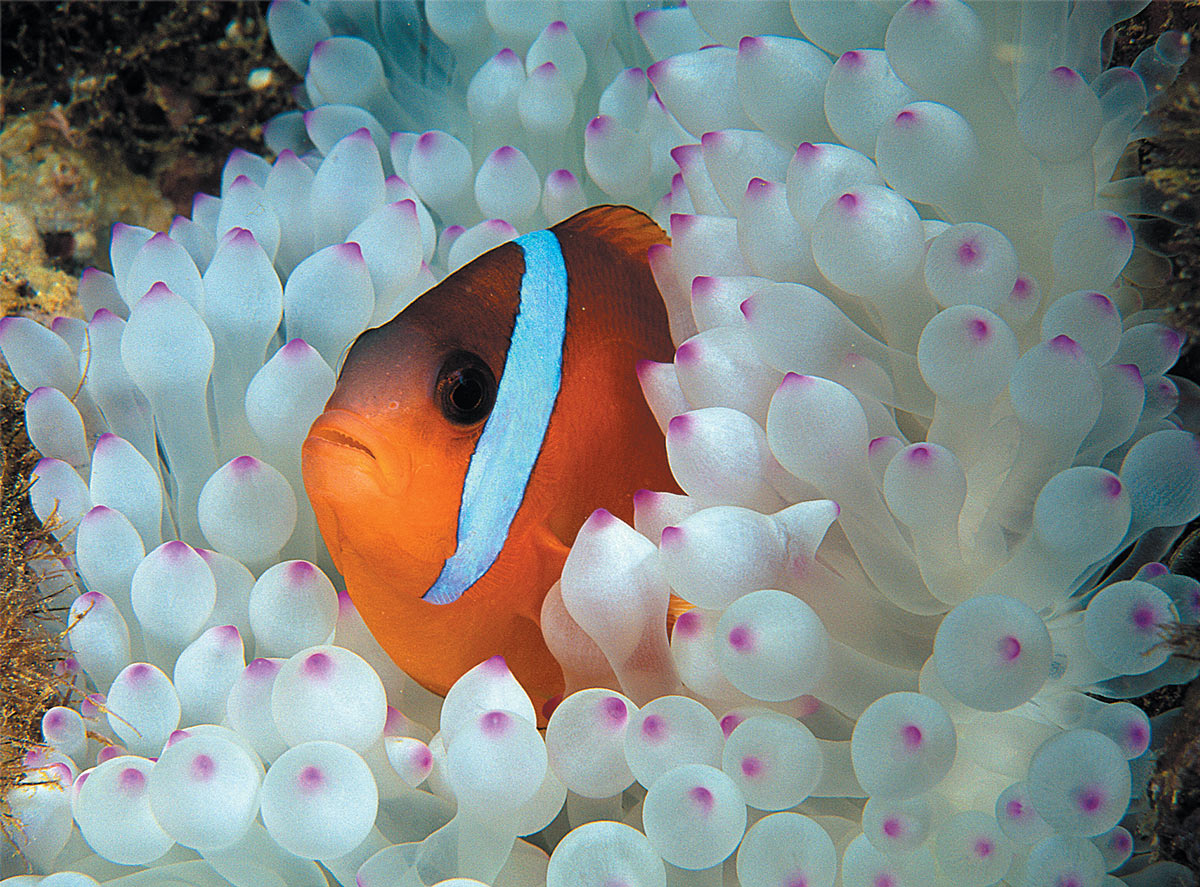 The bright and attention-getting antics of the anemonefishes can lure other fishes into a fatal trap. Photo by Marty Snyderman.

Fishes Aren’t the Only Clever Ones

Of course, it is not just fishes that are equipped with adaptations that enable them to foil predators.

Octopuses and squids emit clouds of ink to evade predators. While the ink obscures the predator’s vision, anesthetizing the olfactory systems of predators such as moray eels is thought to be the ink’s primary purpose.

Sponges might appear to be an easy meal for an uneducated predator, but their tough, fibrous bodies are laced with sharp, silica-based spicules that once nibbled upon repel many fishes. Some species of sponges harbor zoanthids, small, stinging creatures described in the phylum Cnidaria that live on the sponges. Their presence helps to deter some fishes such as French angelfishes that have adapted to feed on the sponges.

Colorful worms known as fire, or bristle, look harmless, but their coloration is a warning that packs a punch. The hairy-looking tufts that border their bodies are composed of numerous fiberglasslike bristles that can easily penetrate the skin of many animals that try to bite them, and once they penetrate, the bristles break off and cause significant pain (at least in the case of humans).

In other instances the best defense is a quick retreat, and few species are as adept at retreat as tubeworms. When relaxed and not feeling threatened, tubeworms extend their featherlike gill plumes to trap food and to extract oxygen from the water. But the instant a tubeworm senses danger, the gill plumes are drawn into their tube, in acts that occur in the blink of an eye.

Immobile animals and others that are rather poor swimmers face a significant problem when it comes to escaping predators and capturing food. With flight and pursuit being unavailable, animals such as corals, anemones, hydroids and jellyfishes need instant results. So it should come as no surprise that the legendary stings of these creatures are both potent and fast-acting. In fact, it is believed that the firing of their stinging cells is one of the fastest cellular responses in all of nature. The firing process is entirely mechanical, being caused by touch or pressure waves, and no thought process is involved.

The echinoderms known as sea cucumbers are rather unattractive creatures. They might be considered an easy meal if sea cucumbers could not expel their stomachs. The sticky, foul organ can be regenerated, and in the short term when regurgitated it repels predators.

I could go on and on listing and discussing various ways marine animals avoid and escape predators. While the adaptations mentioned in this piece certainly are not all-inclusive, I do hope that the variety provides you with valuable insights into the marine kingdom. It is an interesting exercise after a dive to consider the creatures you saw acquire food while avoiding being eaten. Understanding how that real-life game is played will add to your own appreciation of the clever ways of Mother Nature, the most amazing lady any of us will ever know. 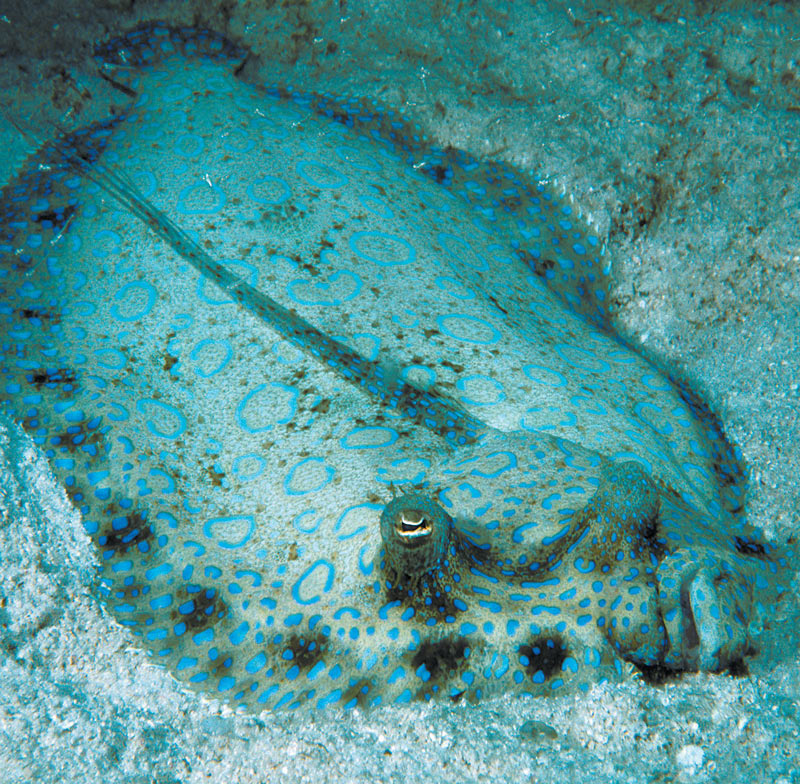 Flatfishes such as flounders use their ability to camouflage themselves to go sight unseen by predators and prey alike. Photo by Marty Snyderman.

Several species of fishes known as flying fishes can glide over the surface of the sea to escape predators such as billfishes, dorado, tunas and sharks. Flying fishes have been documented to soar at speeds of up to 35 mph (56 kmph) for distances up to 750 feet (227 m) in a single glide. Flying fishes use the powerful side-to-side motion of their tails to propel themselves forward through the water, and once they break free of the water these fishes extend their enlarged pectoral and pelvic fins, using them to help the fishes glide over the surface. So, technically these fishes glide as opposed to having wings that enable them to fly. But when you see them gliding across the surface, the name flying fishes certainly seems apropos.

A number of invertebrates, most notably sea urchins, use sharp spines to defend themselves against predators. The barbed spines of most sea urchins lack venom, but create a formidable defense nonetheless. Known for eating corals, the crown of thorns sea star is another invertebrate that is armed with sharp, protective spines.

Give A Little, Gain A Lot

Over time, many sea stars can regenerate lost body parts, and “lost parts” can regenerate a new body in some instances as long as a portion of the animal’s central disc remains attached. So when attacked, sea stars often sacrifice one arm to escape, regenerate and live another day.