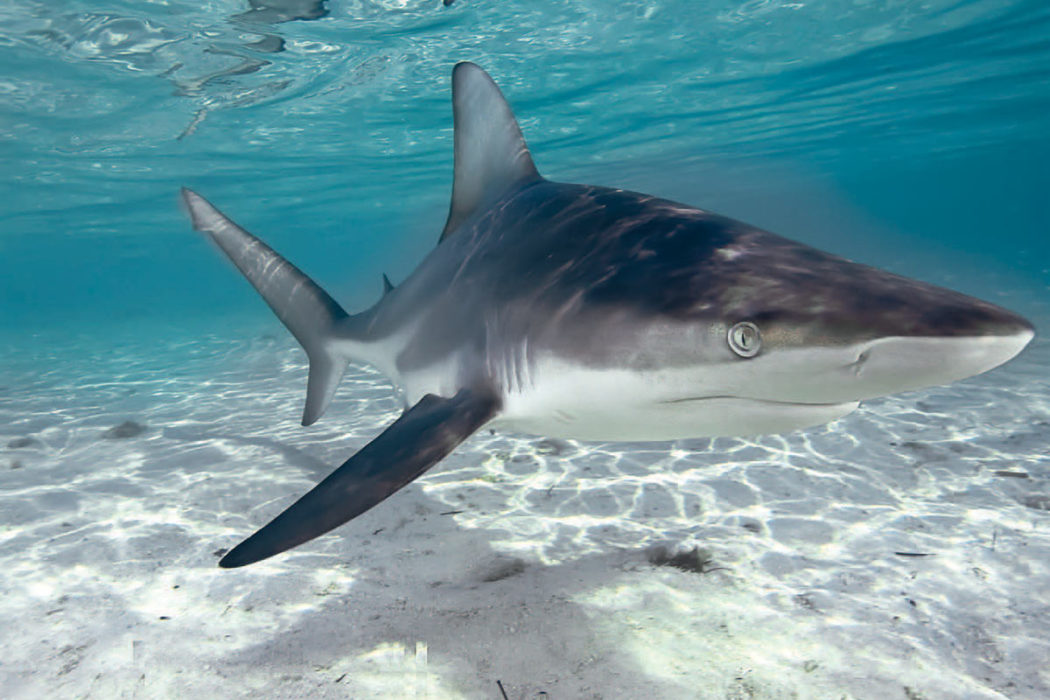 A cosmopolitan species that occurs throughout tropical and subtropical seas worldwide, the blacktip shark is a featured species at some Bahamian shark feeds. Photo by Marty Snyderman.

HAVE YOU EVER SEEN a “seal show” at a marine theme park? While you might be quick to confidently answer “yes,” there is a good chance that if you saw a show, the featured creatures were sea lions, not seals. Some people might think that I am splitting hairs. But marine mammal specialists will tell you that sea lions and seals are far from being one and the same.

Have you ever seen a sea snake? Are you sure it was a sea snake, not a sea krait? While members of both groups are marine reptiles and look a lot alike, sea snakes and sea kraits are not terms that should be used interchangeably.

Another similar scenario exists with the blacktip shark and blacktip reef shark. Due to the similarity of their common names, these species are commonly mislabeled.

These are just a few examples of marine species that get confused with each other. In this article we’ll overview the natural history of these animals so you’ll be more likely to identify them in the future. 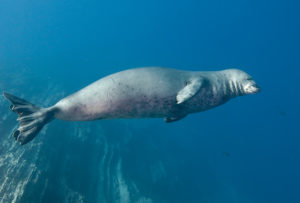 When swimming, Hawaiian monk seals and other earless seals power themselves with their hindflippers and use their foreflippers to steer. Photo by Marty Snyderman.

All sea lions, fur seals and true seals are pinnipeds, a group of carnivorous, semi-aquatic marine mammals that are distinguished by flipper-like limbs used for locomotion. Worldwide there are at least 33 species of pinnipeds, with a debated number of subspecies. The suborder Pinnipedia (the pinnipeds) contains three families: Otaridae, the eared seals; Phocidae, the earless seals and Odobenidae, the walrus.

The limbs of pinnipeds are referred to as flippers and the animals described in this group are equipped with short, wide, flat flippers that are connected by a web of skin. Claws are present in the hindflippers of eared seals and in the foreflippers of earless seals.

The terms seals and sea lions are often used interchangeably, an understandable mistake, as these two groups appear to share much in common. As examples, they have generally sausage-shaped bodies, use flipper-like fins for thrust and maneuverability, are insulated by thick coats of blubber, and have facial whiskers. Many species are highly social animals that gather in large groups and they can predictably be seen on numerous beaches at certain times of year. But a closer examination reveals significant differences between sea lions and seals. As a result, taxonomists separate eared seals (sea lions and fur seals) and earless seals (aka true seals) into different groups. 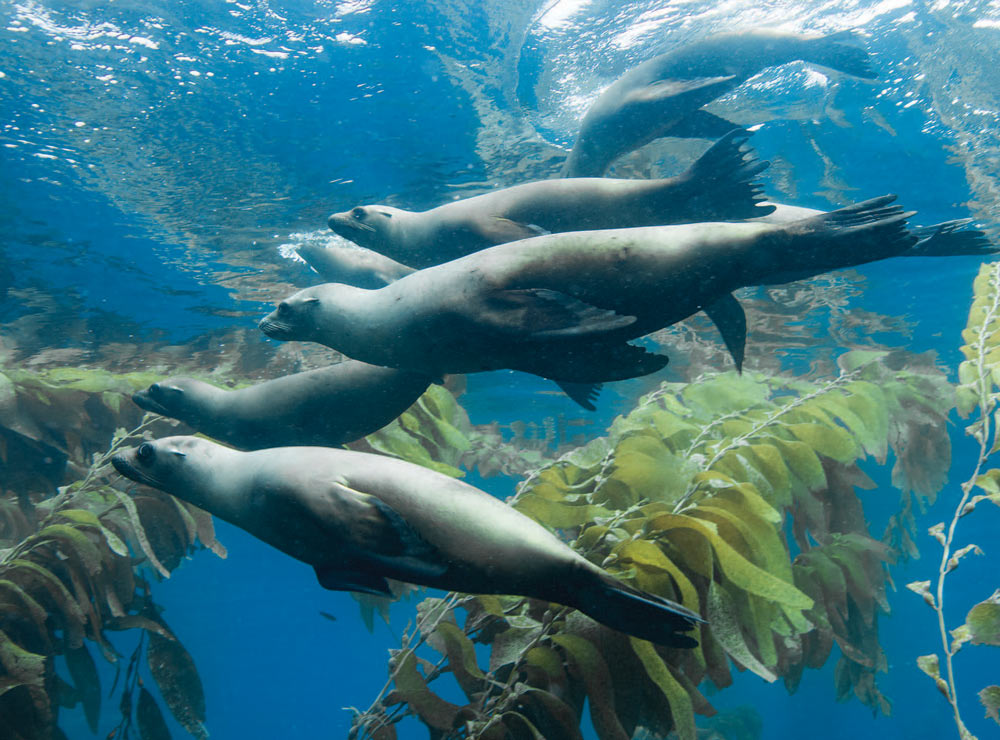 When swimming, California sea lions and other eared seals use their foreflippers to propel themselves and their rear flippers as a steering rudder. Photo by Marty Snyderman.

Surprising perhaps, and certainly a factor that confuses the issue, both eared and earless seals have ears. Eared seals such as the California sea lion, Zalophus californianus, have earflaps, or external ears, on the sides of their head and the earflaps can usually be seen if you know what to look for. Earless seals lack external ear flaps but have one ear hole on each side of their head.

Other characteristics that can be used to distinguish between the two groups include the following: Sea lions and other eared seals are equipped with relatively long, hairless foreflippers. Earless seals such as the harbor seal, Phoca vitulina, have comparatively short, hairy, clawed foreflippers. When swimming, sea lions and other eared seals use their foreflippers to propel themselves and their rear flippers as a steering rudder. Hawaiian monk seals, Neomonachus schauinslandi, and other earless seals power themselves with their hindflippers and use their foreflippers to steer.

Additionally, the hindflippers of eared seals can be rotated underneath the body, thus enabling them to walk on land. In fact, eared seals are sometimes referred to as walking seals. Considerably less agile on land, earless seals move on solid ground by keeping their rear flippers held out behind them while they “scoot along” in caterpillar-like fashion as they make their way forward. 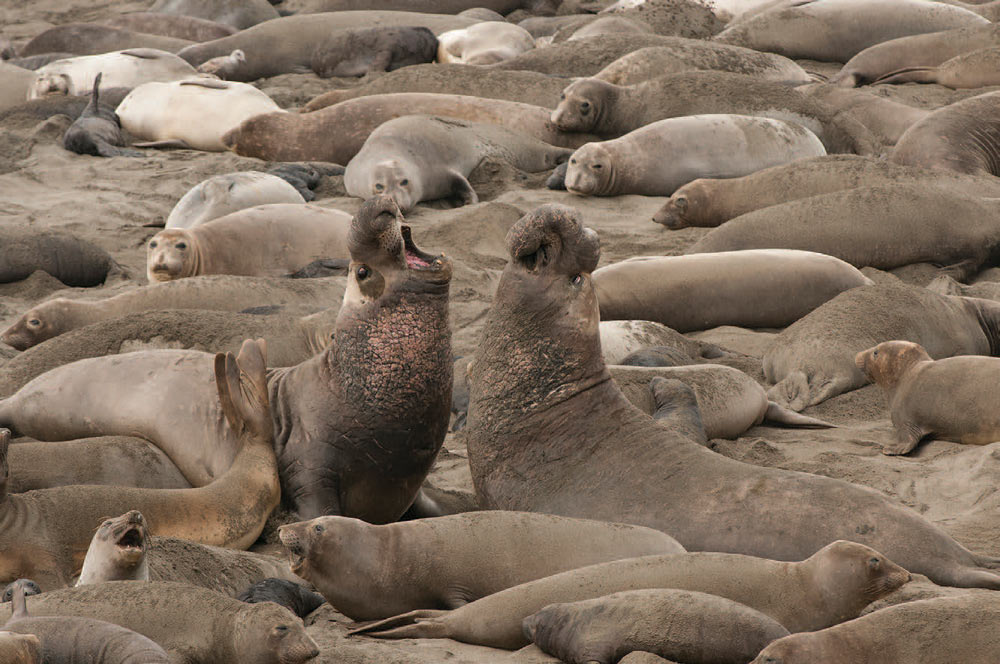 Many species of pinnipeds, including the northern elephant seals pictured here, are highly gregarious animals that gather in large colonies, or herds, at various times of the year. Photo by Marty Snyderman.

Sea lions and other eared seals are equipped with long, smooth facial whiskers, while the whiskers of earless seals appear to be crimped, or beaded, by comparison. Eared seals are equipped with a comparatively harsh coat while earless seals have a soft, dense undercoat comprised of short, slick, fine hairs that are protected by coarse guard hairs.

Occurring mostly in the Atlantic, the various species of earless seals are broadly distributed along coastlines and islands north of 30 degrees north latitude and south of 50 degrees south latitude. And some live in the areas surrounding both poles. A few species also occur in tropical and sub-tropical regions. Most species live in and around saltwater but a few such as Siberia’s Lake Baikal Seal, Pusa sibirica, inhabit freshwater lakes and rivers.

One factor that complicates distinguishing between the two groups in the field is that in many places it is common for various species of sea lions and seals to intermingle. Some species in both groups are highly gregarious animals that gather in large colonies, or herds, at various times of the year. In fact, seven species of pinnipeds with as many as 10,000 animals have been documented to mix at Point Bennett on California’s San Miguel Island. This gathering represents the largest population of mixed species of sea lions and seals anywhere in the world. 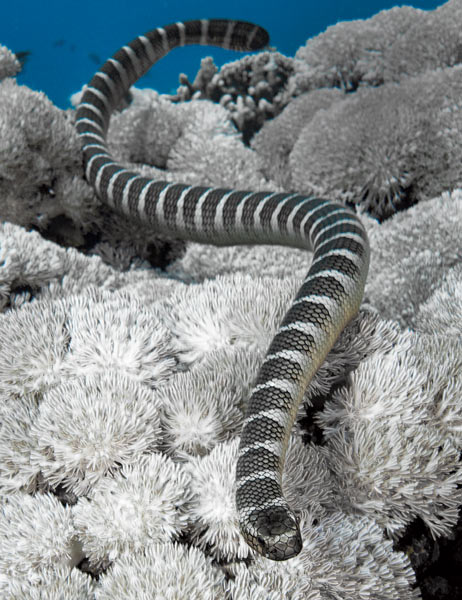 Efficient swimmers, both sea kraits, like the Chinese banded sea krait pictured here, and sea snakes possess long, laterally compressed, muscular bodies and flattened, paddle-like tails that can be used in oar-like fashion to steer and power them forward. Photo by Marty Snyderman.

Sea snakes and sea kraits are reptiles, a group of air-breathing, vertebrates that cannot internally regulate their body temperature. The skin of reptiles is covered with scales or hard plates known as scutes.

The earliest known reptiles first appeared on Earth a little over 300 million years ago. Modern day reptiles descended from four-limbed vertebrates known as tetrapods, although the four limbs are not immediately obvious to laymen. Remnants of those limbs are evident in modern day sea kraits and snakes.

In biology, the word radiation refers to a species or group of animals that evolved into additional species or types. Herpetologists generally agree there are five major radiations of sea snakes. Sport divers generally encounter two: “true” sea snakes and sea kraits. However, many lay divers sometimes use the word sea snake to include both groups. Not surprisingly the inconsistency leads to some confusion and inaccuracies.

With venom ten times as potent as that of cobras, the black-banded sea krait, Laticuda semifasciata, serves as an excellent example to illustrate the confusion. This species is also known by the common names banded sea krait and Chinese sea snake. But a single species is not both a sea snake and a sea krait.

It is highly likely that the first snakes were aquatic animals. But the early snakes left the aquatic world and crawled onto land. All living species of sea kraits and sea snakes are thought to have descended from a family of venomous terrestrial snakes.

Sea snakes and sea kraits share many adaptations that make them well suited for their aquatic lifestyles. Efficient swimmers, they possess long, laterally compressed, muscular bodies and flattened, paddle-like tails that can be used in oar-like fashion to steer and power them forward. The nostrils of all sea snakes and sea kraits are located on the top of their heads. This positioning makes it easier for a swimming serpent to gain access to fresh air. Valves seal the nostrils when these reptiles descend. 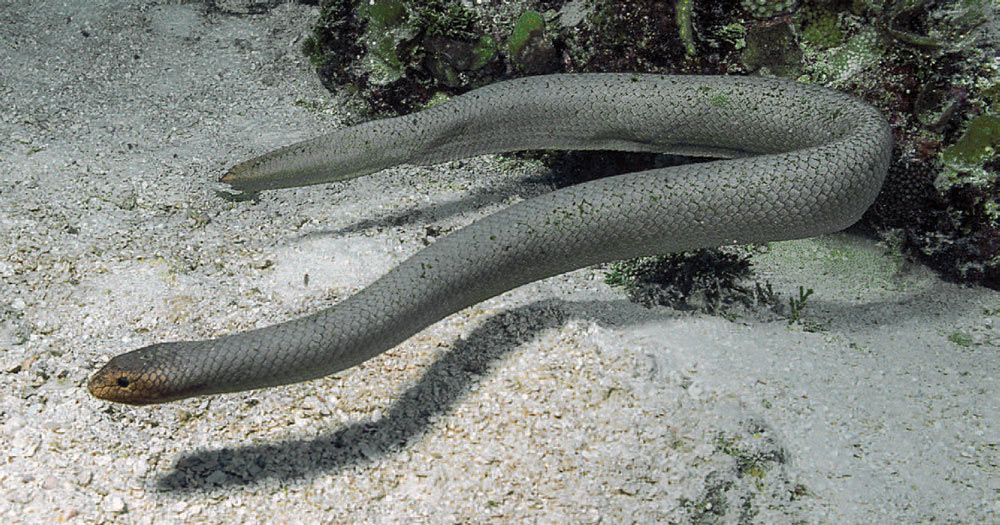 Sea snakes, like this olive sea snake, rarely, if ever, leave the water. Photo by Marty Snyderman.

Another adaptation that greatly enhances the ability of both sea snakes and sea kraits to live in the sea is that they shed their skin frequently, usually once every two to six weeks. This allows them to get rid of organisms such as bryozoans, barnacles and algae that attach to their skin and that might cause infections and disease, and impede their ability to swim.

As a note of clarification, unless you see the animal on land, it can be challenging for lay divers to distinguish between sea snakes and sea kraits in the field. But knowing there are different group of animals will prevent you from assuming an animal is definitely a sea snake or sea krait without further knowledge. 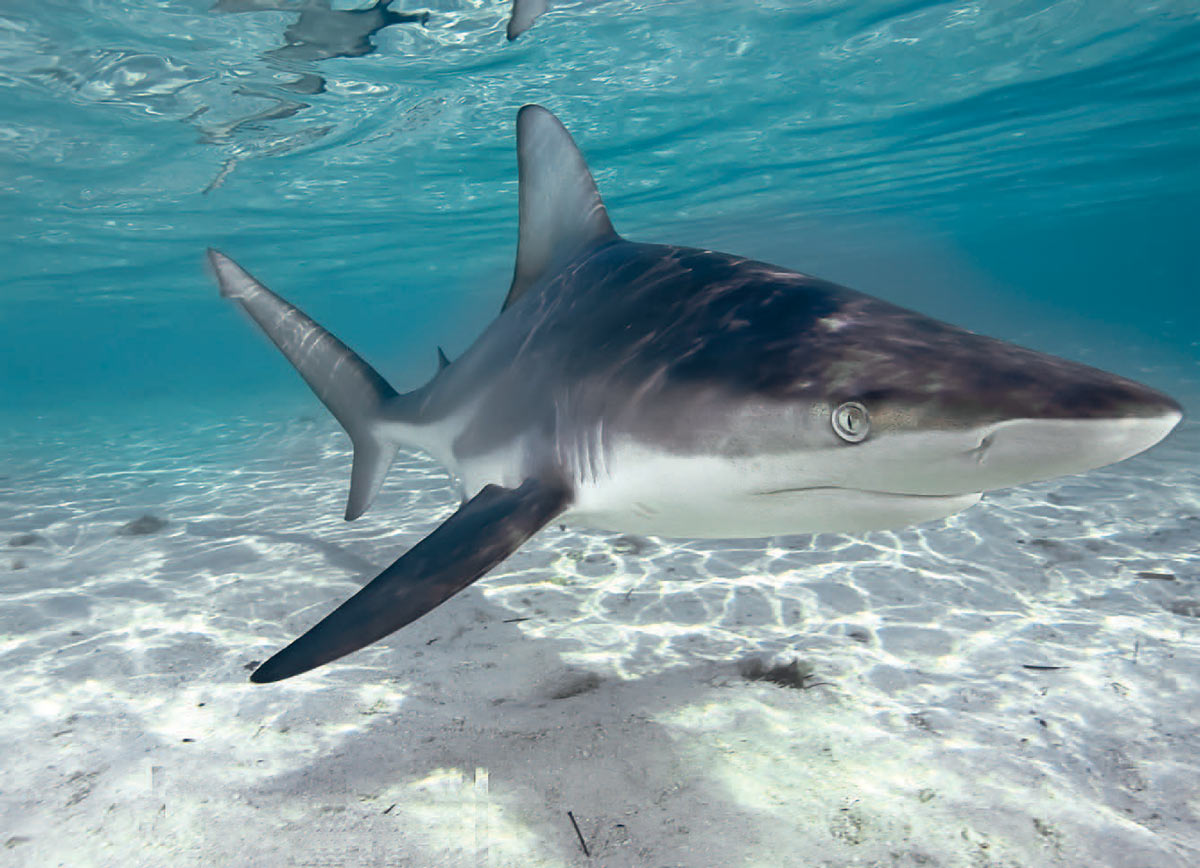 A cosmopolitan species that occurs throughout tropical and subtropical seas worldwide, the blacktip shark is a featured species at some Bahamian shxrk feeds. Photo by Marty Snyderman.

A widely distributed species found in the Indo-Pacific and eastern Mediterranean, the blacktip reef shark, Carcharhinus melanopterus, tends to occur singly or in small aggregations. Although they are usually wary, blacktip reef sharks are commonly spotted in shallow water around coral reefs and near drop-offs. In addition, they are occasionally encountered in brackish water areas where they tend to move in and out with the tidal flow. Blacktip reef sharks are also known to enter areas of freshwater that have easy access to the sea. 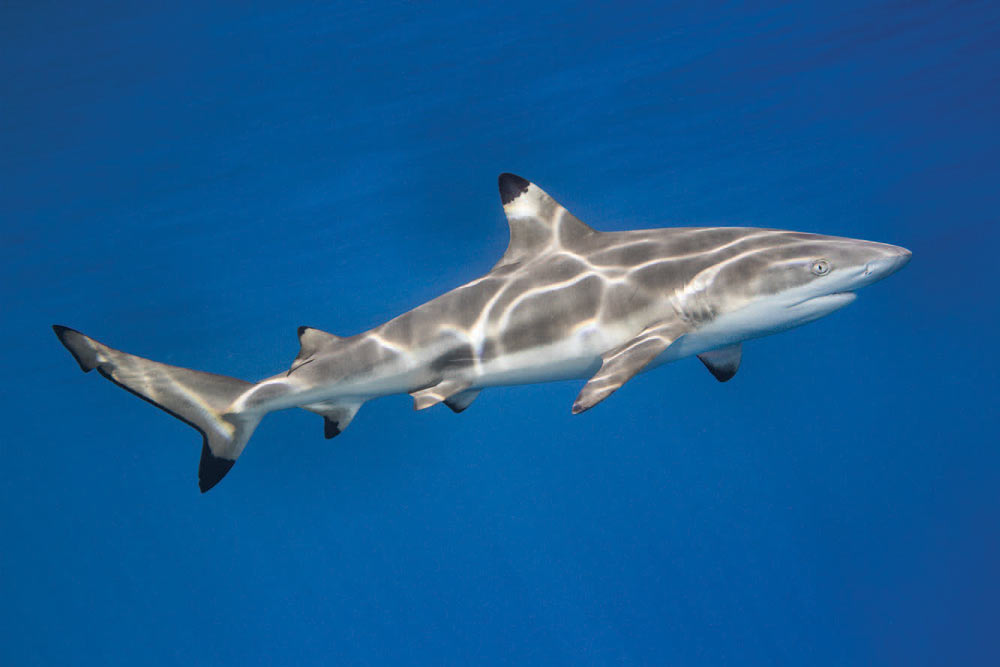 A cosmopolitan species that occurs throughout tropical and subtropical seas worldwide, the blacktip shark, Carcharhinus limbatus, is a featured species at some Bahamian shark feeds. Blacktip sharks inhabit the top 100 feet (30.5 m) of water in both inshore and offshore areas. Divers usually encounter them on or near continental shelves and near islands. Blacktip sharks are common near some river mouths, in some estuaries, lagoons, bays and along drop-offs in coral reef communities.

Blacktip sharks have stout bodies, snouts that are long, narrow and somewhat pointed, relatively long gill slits compared to their overall body size and a tall first dorsal fin. They are generally dark gray to bluish or bronze on the upper portion of the body and off-white below. As a rule, adults are slightly larger than mature blacktip reef sharks.

Blacktip sharks lack the patterned dorsal fin of blacktip reef sharks and that makes it easy to distinguish between these two species. However, it can be a challenge to distinguish blacktip sharks from a variety of other grayish colored, small to medium-sized sharks that are part of many reef communities where blacktips also occur.

Blacktip sharks feed mostly in midwater where they prey on a variety of bony fishes, some other sharks, rays, crustaceans and cephalopods.

How Do You Make a Baby Blacktip?

Like many other sharks, as the result of copulating with males, mature female blacktip reef sharks and blacktip sharks bear well-developed live young that essentially look like miniature adults. However, in at least one case, a captive blacktip shark that had no contact with a male reproduced via a process known as parthenogenesis, in which viable young are produced without a male fertilizing an egg. Parthenogenesis is known in several species of sharks and in at least one incidence the female had no contact with any other member of her species for a decade. Go figure!