If the words “desert” and “diving” don’t seem to go together, then you haven’t visited the desert island/diving destination of Bonaire. Bonaire got its name, which means “good air,” from the constant easterly wind that provides gentle cooling breezes. Bonaire is the “B” in a group of islands collectively called the ABC Islands of the Netherlands Antilles. The A and C are Aruba and Curaçao, respectively. All are volcanic and ringed with old exposed coral conglomerates along their coasts. Bonaire is the second-largest after Curaçao, at about 110 square miles (286 sq km) in size. Like Curaçao, it also has a smaller sister landmass called Klein Bonaire, which adds about another 2.5 square miles (6.5 sq km). The island lies just 50 miles (80 km) north of Venezuela. The highest elevation is on the north end, in the Brandaris area, at about 800 feet (242 m) high. Weather conditions are arid like a true desert island with primarily plants of low-water requirements like cactus and pickleweed. 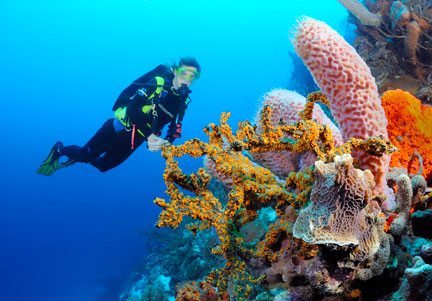 The first inhabitants were most likely Arawak Indians who canoed over from the mainland around A.D. 1000. For some 500 years they toiled out an existence on the dry scrubby island. In 1499, Spanish explorers Ojeda and Vespucci landed on Bonaire and claimed it for Spain. Without gold or sufficient rainfall for crops, there was little interest to build a colony, so many of the natives were pressed into slavery in the silver mines and plantations of Hispaniola. In the mid-1500s the Spanish governor of Bonaire imported cattle, sheep, goats, pigs and donkeys. The animals were raised mostly for hides so they were allowed to have free run of the island. Today there are substantial “wild” populations of goats and donkeys roaming around still.

By the 1600s slaves were becoming a big commodity. With Curaçao set up as the center for the slave trade, it was only a matter of time before a slave-fed industry appeared on Bonaire. Indian and African slaves began to work primarily in maize and salt production. At about the same time the island became a destination of incarcerated criminals, so prison houses were also built. Over the next 200 years the British, Dutch and Spanish squabbled over Bonaire and its neighboring islands. And only military personnel and the workers were allowed on the island. Finally the Dutch solidified their hold on the islands in the early 1800s through the Anglo-Dutch Treaty of 1814. By 1837, salt production was the largest export. During this time four large obelisks were constructed near the salt lake and painted the different colors of the Dutch flag and the Royal House red, white, blue and orange. These assorted colored markers signaled to the different ships the correct salt pan to approach. The colors represented different grades of salt. They still stand today. In 1863, slavery was abolished, and with increased competition from other areas of the world the salt industry on Bonaire sharply declined. There is now a substantial private salt works working those original slave-labored salt fields. The tiny slave quarters of brightly painted stone huts still exist and are well worth the visit.

After slavery was abolished Bonaire was no longer a “government-run plantation.” The land was put up for auction and purchased by a corporation. Many newly freed slaves went to work in the copper mines of Venezuela. After oil was discovered in Venezuela at the turn of the 20th century, the island received a shot in the arm economically and people began to return. The first airport was built in the mid-1930s, and by WWII a prisoner of war camp was setup for Germans and Dutch Nazis. Nearly 500 were held captive for the duration of the war.

Queen Juliana of the Netherlands granted the right of “self-rule” to Bonaire in 1954. Aruba, Bonaire and Curaçao still are considered a Dutch protectorate. However, sometime late this year, the entity of the Netherlands Antilles is to be dissolved, with the member islands receiving new constitutional status. Through the 1960s and ’70s the island was considered a remote getaway. In 1979, the marine park and the Washington Slagbaai Park reserve were established. Soonafter, Bonaire was known as a “Divers Paradise,” whose phrase now graces the automobile license plates. The two main towns are Kralendijk, with most of the accommodations and infrastructure, and Rincon, the original settlement from the 1500s that is farther inland. It was originally settled away from the coast to minimize pirate attacks. I suppose it was too hot and had too much cactus for the pirates to trek that far. Bonaire has a population of about 16,000.

When you look at a map of Bonaire a little sideways the island kind of looks like the “boot” of Italy. Most of the established dive sites are where the shoelaces would be, that is, on the west side extending from north to south. Klein Bonaire is tucked in right in the middle, about a half-mile offshore. The largest cluster of dive resorts also happens to be in this general vicinity. Due to the small size of the island, it doesn’t take long to drive from one point to another, but it helps if you plan spending one day going south and another going north. Although, even the best of plans sometimes just don’t work. Our rental pickup wouldn’t budge, and the agent apologetically explained that it’d be morning before they could deliver another.

One of my diving companions had just come back from an errand and quickly found out we weren’t going anywhere. Instead of the reaction I thought I’d get, he just said, “No problem, let’s go see the sunken tugboat just south of our diving dock.” So we grabbed our gear and walked over to our dive pier, signed out a few EANx tanks, suited up and giant-strided in. After a short, very easy swim, we dropped down and landed on a very cool, old wood tug at about 95 feet (29 m). And that’s when it hit me. In Bonaire, you’ve got options. Virtually all the resorts have their own dive facility or share with a couple of others. Between all the dozens of marked sites and dive dock access, you have lots of opportunities to get wet, even without a car or boat — perfect for divers of all experience levels, and snorkelers, too.

Of course, everybody has his or her favorites. Arguably, one of the most popular is the shipwreck Hilma Hooker. There aren’t too many places in the world where you can make a shore dive on an intact shipwreck. The Hilma was a 1,000-ton (900-metric ton) cargo vessel that just happened to be carrying more than 25,000 pounds (11,250 kg) of marijuana behind a false bulkhead. The vessel was impounded to await the court trial date. The vessel was not in the best condition to begin with, and officials worried that it would sink at the town dock so they towed the Hilma out to anchor offshore, just in case. Well, surprisingly, it did sink and right in a perfect location between the inner and outer reefs; quite a stroke of “good luck.” While it is a shore entry, care must be taken because the entry is over old coral rubble. The surf rarely is more than a foot (0.30 m) but occasionally a slightly larger set could catch the unsuspecting diver off guard.

The 236-foot-long (72-m-long) vessel lies on its starboard side and almost all of it is visible from the surface as you make your descent in 90 feet (27 m) of water. If you’re lucky enough to get there before or after everyone else has left, the chances of seeing the larger tarpon en mass is more likely. The Hilma now sports a coat of sponges and other encrusting life to give it a classic shipwreck look. The colorfully encrusted bronze propeller is at only 65 feet (20 m) of depth. It’s very easy to want to make several dives here to fully explore the old smuggler. The Hilma Hooker is definitely one of my favorites.

Just a few miles farther to the south is the dive site Red Slave. It is named after the slave quarters located there. You park your truck right next to the impossibly small slave “houses.” This location is near the southern end of the island and, as such, can be a little rougher than calmer sites farther north. Currents can also be a challenge here so one must pay attention. It is a beautiful area, though, and eagle rays, turtles and larger schools of fish are more likely to be seen in this relatively little visited area. There’s significant soft coral and some beautiful white sand flats with lots of activity by goatfish and rays.

Klein Bonaire is reachable by boat. Although it looks fairly close from the main island, trying to swim out to it isn’t a good idea. There’s significant boat traffic and strong currents. One of the 24 official sites is called simply enough, “Just a Nice Dive.” Along this area are very nice sea fans and elephant ear sponges along with healthy clusters of brain coral.

There are nearly 100 recognized dive sites throughout the island just on the west side. However, as of 2010, the famous town pier is now completely closed to divers. There is a handful of sites on the east side too and there is a dive operation that specializes in east side diving but it’s not for every one, as conditions can be a bit rough. Choppy water and quick currents are the norm here, so it’s an area best dived with a local guide.

With the type and number of diving options available on Bonaire, it’s easy to imagine the island as a “dive, dive, dive” destination. But you must surface at some point, even if it’s to grab a quick bite or bag a few souvenir T-shirts. But don’t worry; Bonaire’s got that, too.

As you might expect, the local cuisine has heavy Dutch and South American influences. Much of the foodstuffs are imported from Venezuela and other South American countries. Freshness is the key word and it’s eminently obvious when you take your first bite of keshi yena, a stuffed Dutch Edam cheese with Antillean flair. Of course, fresh seafood is on virtually every menu. There is little in the way of American fast food but most establishments offer classic North American dishes.

The main town of Kralendijik has a shopping district and a downtown waterfront with bars and eateries. Nightlife is available for those who want to go dancing and spend a night on the town. The island is ideal for diving, beachcombing and generally relaxing. Just remember, when driving on Bonaire, goats and donkeys have the right of way.