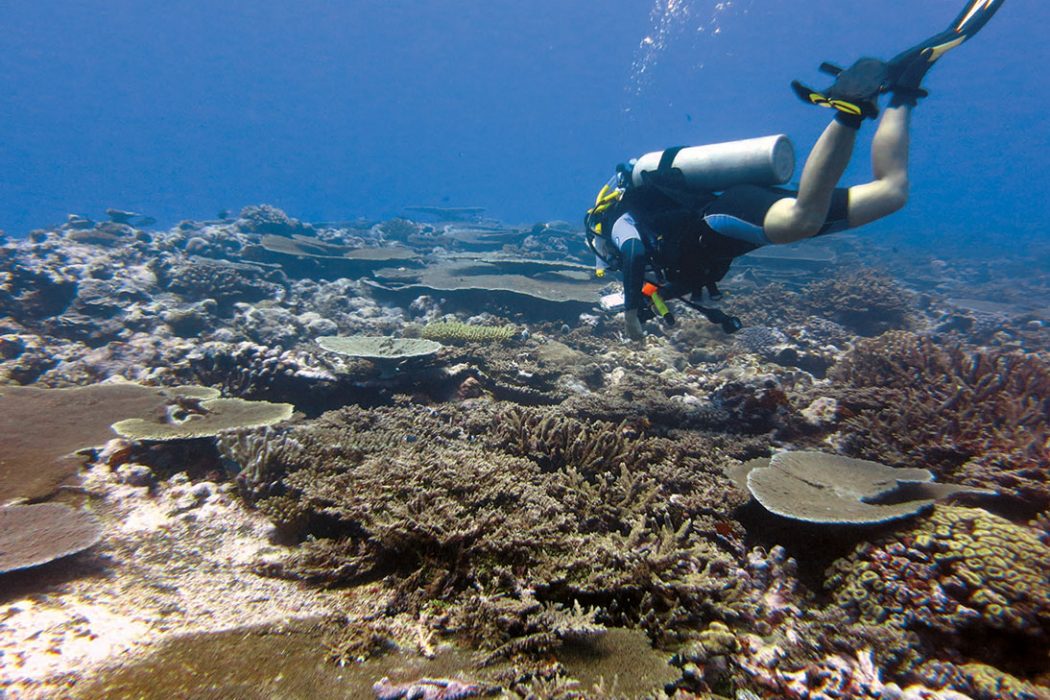 If you’re ready to experience American Samoa for yourself, here’s a glimpse of what you’ll experience during your visit.

Fagatele Bay is a 0.25 square mile treasure off the southwest coast of Tutuila. The spot is a no-take marine protected area to support what is one of the most biologically diverse areas in the National Marine Sanctuary System. Surveys have identified at least 200 species of corals in the bay that are thought to be the centerpiece of a community of more than 1,400 species of algae and invertebrates and more than 270 species of fish. Abundant groups include adult and juvenile damselfish, surgeonfish, wrasse, butterflyfish, and parrotfish.

The bay can be accessed by land and is only a short drive from Pago Pago to the gate at a private residence in Futiga Village. You can check in with the family who owns the land, pay a small fee and be on your way. You enter through a metal gate and begin walking up a slight slope to the grassy trail atop the ridge that separates Fagatele Bay from another sanctuary area, Fagalua/Fogāmaˊa. The view is incredible and brings most to pause and take it in. Not far up the trail is the entrance to the forest where you’ll switchback down the earthen trail to find wooden stairs that lead to a small sandy beach that can be enjoyed at lower tides.

When the water level is a bit higher and calm enough, you can snorkel over the reef-flat to deeper water for an adventure. If you are lucky enough to charter a dive tour, you can drop into paradise for a longer visit. As with most dives in American Samoa, diving from a boat with a certified local dive master is safer and always recommended. Shore-based diving can be challenging and dangerous even for experienced locals due to strong currents that can change with the tides.

While exploring the bay, you may encounter a curious blacktip reef shark, endangered hawksbill and green sea turtles or spotted eagle rays gliding by. Pacific bottlenose and spinner dolphins are known to visit Fagatele Bay. During September and October, the peak months of whale season, humpback whales may serenade you as you search for giant clams.

Fagalua, located between Fogāmaˊa and Fagatele Bay is a coral rubble beach that can be accessed by trails on either side. However, as the trails are not marked, it’s best you go with a local who knows the way. Fogāmaˊa is the site of two turtle images carved in a boulder and prehistoric fale (house) foundations. This site is often used by the sanctuary team to teach local students about marine conservation and teach traditional and non-destructive fishing practices that are an important part of daily life.

Like Fagatele Bay, Fogāmaˊa is only a short drive from Pago Pago. Located in the Village of Vaitogi, you can take the last right before reaching the Turtle and Shark Lodge (a private residence) and make arrangements to park near the trail entrance for a small fee. The road is rough and requires a truck or SUV. Once parked, you can head down a grassy path that leads to a rocky dirt trail through the forest. When you reach the bottom, you’ll walk for a few minutes through a banana plantation before reaching stairs that lead to one of the nicest and most extensive sandy beaches on Tutuila.

This area is a favorite among locals for camping or enjoying a day with family and friends at the beach, although I’ve never seen it crowded other than for sanctuary sponsored events and outreach programs. The back of the bay is shallow, even at higher tides, but can be snorkeled with care to enjoy some smaller corals. I’ve heard people liken the area to a small coral nursery. At the far end of the beach, you can find a deeper, sandy and hard-bottom area that is often used for cooling off and viewing small fish. There is a wave that breaks where the back cove meets the larger bay. It is recommended you not cross this area and only enter the larger bay via boat where you can enjoy fishing and diving.

Aunuˊu is a small, volcanic island located off the east side of Tutuila. You can make the 30-minute drive from Pago Pago to Auasi Harbor where you can catch a local alia boat that will shuttle you across the one-mile crossing for a few dollars. Once on the island you can enjoy a day hike that is now available through a local tour operator. Wandering through the village, you can experience the wetland taro fields, cool off in the tide pools off the east side, listen to the stories of the island and feast on the traditionally prepared foods of the Samoan umu – food cooked in an earthen oven.

On the east side of the island, behind the freshwater marsh, where the sanctuary’s multiple-use and research zones meet, are spectacular cliffs and one of the most scenic views in the territory. Included in sanctuary waters is Maˊamaˊa Cove. Legend has it that the cliffs that surround the cove are actually symbols of two lovers, Sina and Tigilau. Long ago, they say, the two lovers wanted to sail back to the Manuˊa islands about 60 miles south of Aunuˊu. During their journey, they encountered a terrible storm that smashed their boat. However, the gods of the sea took pity on them and turned them to stone. It’s said that if you look close enough you can see the outline of their faces and boat in the cliffs facing Manuˊa, what would have been their final destination.

The currents around Aunuˊu are very strong and change with the tides. Swimming or snorkeling outside of the harbor area should only be done with an experienced local guide. Diving from a boat is the preferred option for both safety and enjoyment. To the west of the harbor, you can cruise down the sandy bottom to deeper depths while exploring the coral covered slope. Under the right conditions, you can drop down and travel east into the current where you may see sea turtles and a variety of fish as you pass the reef slope on the way to the larger boulder corals off the northeast side of the island before drifting back to the boat.

The waters surrounding Swains Island compose slightly more than 52 square miles of the sanctuary. Within these waters, researchers have observed high coral cover and diversity including large schools of predators, mostly barracudas, as well as jacks and snappers. Sharks and schools of humphead wrasse are frequently seen in the nearshore waters. Dogtooth tuna are more common at Swains than elsewhere in American Samoa. Swains Island is considered a hotspot for coral cover, fish biomass and richness.

Swains Island is a privately owned, low-lying coral atoll that was added for protection through the 2012 sanctuary expansion at the request of the Jennings family.

Ta’u Island, part of the Manu’a Island group, is located 70 miles east of Tutuila and 6.9 miles southeast of Olosega. The Ta’u Management Area is approximately 14.6 square miles and includes both nearshore and deep waters from Si’ufa’alele Point south along the western coast, and includes deep waters beginning 0.25 miles offshore, adjacent to the nearshore waters of the National Park of American Samoa, along the southern coast between Si’ufa’alele Point and Si’u Point. Massive Porites coral heads occur in the shallow waters just offshore of Afuli Cove along the island’s southwestern coast. These huge colonies are among the oldest and largest known corals in the world. The western side of Ta’u’s southern coast is a regional hotspot for coral and fish diversity and possesses a distinct coral community. The sanctuary serves as a deep-water buffer zone for the marine areas of the national park, as well as adding near shore and reef protection around the Porites coral heads.

Muliāva (Rose Atoll) is located 150 miles east of Pago Pago Harbor. The atoll gets its name for the rose-colored crustose coralline algae that dominate the area. One of the smallest atolls in the world, Rose Atoll consists of about .03 square miles of land and 2.5 square miles of lagoon surrounded by a narrow barrier reef that are included in a United States Fish and Wildlife Service National Wildlife Refuge. At Muliāva, scientists have chronicled a distinct environment within the archipelago with large numbers of fish and a unique coral community that includes more than 270 species of reef fish.

This area also includes the submerged volcanic cone known as the Vailuluˊu Seamount, a diverse biological community that includes crinoids, octocorals, sponges, and cutthroat eels. Since 2003, a 1,100-foot-tall volcanic cone, known as Nafanua, has grown in the seamount’s crater. Scientists speculate that Nafanua will breach the sea surface within decades, forming a new island in the Samoan island group. The seamount cone has several types of hydrothermal vents that provide habitat for an unusual group of organisms, ranging from microbial mats to polychaete worms.