Puerto Rico might not be the center of the universe, but for perhaps 200 years it was considered the gateway to the Caribbean. Ships sailing from Europe to the New World would travel south to Africa, and then pick up the trade winds that carried them west across the Atlantic. The journey would be arduous, and after weeks on the open ocean, crews would seek shelter, water and supplies in a safe port on the island paradise of Puerto Rico. Revived and resupplied, they could continue on their way to destinations on the Spanish Main, spanning the New World coastline from Florida to South America. In those days, whoever controlled Puerto Rico controlled access to the New World. Puerto Rico was a coveted possession — a truly “Rich Port.” Visiting Puerto Rico today, we find a tropical paradise rich in history and nature, shrouded in legend and myth, and steeped in romantic images of pirates and gold.

Puerto Rico is the smallest and most eastern island of the Greater Antilles archipelago, which skirts the northern Caribbean and includes Cuba, the Caymans, Hispaniola (the Dominican Republic and Haiti) and Jamaica. With the North Atlantic ocean to the north and the Caribbean to the south, the roughly rectangular mainland is 110 by 40 miles (176 by 64 km), with an area just over 3,500 square miles (9,100 sq km); roughly two-thirds the size of Connecticut. Sixty percent of the island is mountainous with the “La Cordillera Central” range stretching east-west across the island. Some 50 rivers originate in the mountains, tumbling to the shores both north and south. The Sierra de Luquillo Mountains in the northeast portion of the island catch the warm, moist trade winds, and send 100-200 inches (254-508 cm) of annual rainfall cascading down the mountainsides through the lush rain forest known as El Yunque.

To the north of the mountains is a rocky, limestone karst region, giving way to spectacular sandy beaches intermixed with rocky shoreline and barrier reefs. The capital city of San Juan is located on the north coast, set on a deep-water, natural bay with an easily defended islet. A coastal plain stretches across the southern mainland, where just a few miles offshore the bottom simply falls away. Puerto Rico is surrounded on the east, west and south by a steep continental shelf dropping precipitously, reaching depths of more than 1,000 feet (303 m).

Puerto Rico was first sighted by Columbus on his second voyage to the New World. In 1508, Ponce de Leon started a Spanish colony, and began displacing the native Taino Indians, leading to a bloody revolt in 1508. The city of San Juan was founded in 1521, and fortifications to protect the port began in 1533, with construction of the Castillo San Filipe del Morro fort started in 1539. It would be some 250 years (1783) before the fortifications were completed.

A coveted, strategic port controlling access to the New World and its riches, Puerto Rico was a major military post throughout much of the 16th, 17th and 18th centuries. Following repeated attacks by the English, a second fort called El Canuelo was constructed just half a mile (0.8 km) across the islet from Del Morro, allowing protection of the harbor entrance with a deadly crossfire. Puerto Rico was now a shining jewel of the Spanish Crown.

Following attacks by the English and Dutch, construction of a wall around San Juan was initiated in 1634, but was not completed until 1790. The island remained under Spanish rule until the Spanish-American war. Puerto Rico became a U.S. territory in 1898. 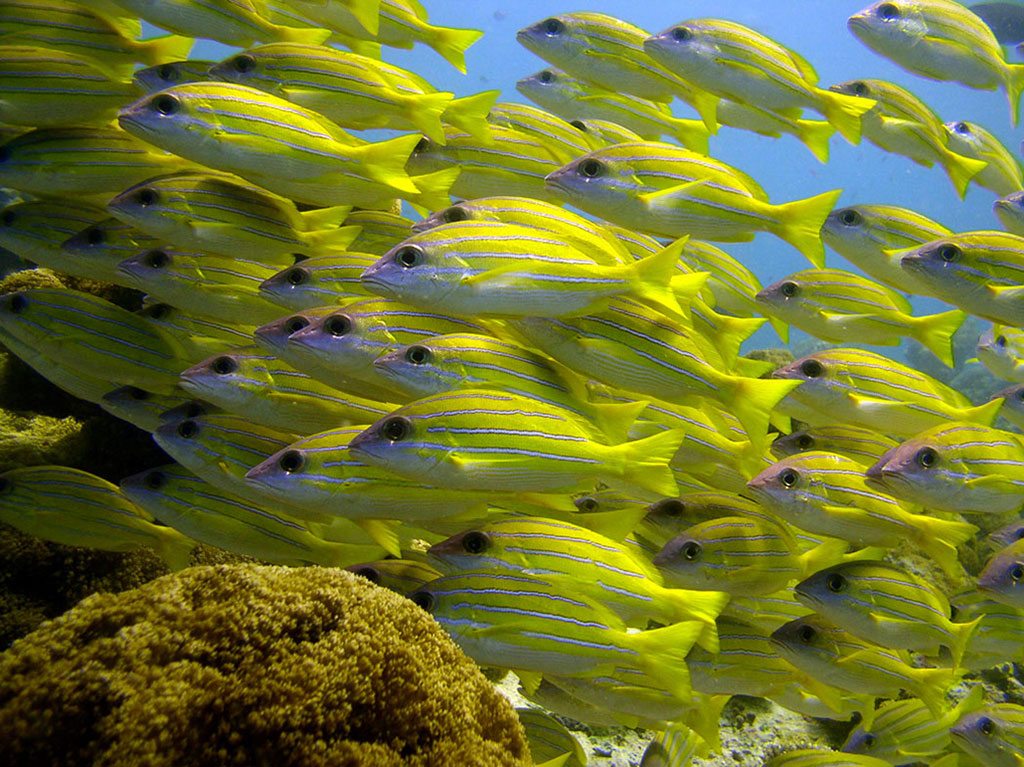 Puerto Rico may not have earned the reputation of other Caribbean dive destinations, but its treasures are legendary. If you only have a few hours to squeeze in some diving, check out the reef at the Condado district, right on the San Juan waterfront. The coral-encrusted lava labyrinth is home to angels, jacks, wrasses and butterflyfish, and ever-present crabs, octopuses, coral shrimp and sea horses. Visibility is less than ideal — typically 10-20 feet (3-6 m) — but it’s perfect for Open Water certifications and night dives.

In general, the diving gets better the farther you travel from San Juan. To the east is the coastal town of Fajardo (Fa-HARD-oh), where you can explore the mysteries of the eelgrass beds, or poke around the coral reefs, small walls and caverns. Visibility is typically over 50 feet (15 m), with enormous coral heads and strikingly delicate gorgonians. Further east, Cayo Diablo is home to moray eels, barracuda and the occasional manatee.

South of Fajardo is Humacao (OOM-a-cow) with myriad delightful dive sites. Check out “the Cracks” where massive fractures in the lava bed form walls, channels, caves and tunnels. In the spring, dolphins are often seen in their breeding grounds at Basslet Reef.

More exceptional is the diving off the south coast of Puerto Rico, where the continental shelf plunges from about 60 to 100 feet (18 to 30 m) to more than 1,500 feet (455 m). A wall running parallel from the village of La Pargauera to the city of Ponce is home to a plethora of elkhorn and staghorn coral and visibility that at times exceeds 100 feet. It’s been compared to the wall in the Cayman Islands.

Perhaps the most stunning diving in Puerto Rico is found on Mona Island, 40 miles (64 km) west of the mainland. This area is often compared to the Galapagos, with more than 270 species of fish adorning coral reefs, walls, caves and caverns. The crystal-clear waters, sometimes exceeding 200-foot (61 m) visibility, are home to numerous whales, dolphins, turtles and marlins. Traveling to Mona Island requires a rough-water, three-hour boat ride from the mainland, but the trip is worth every minute.

True Pirates of the Caribbean

The cracks, corals, walls and wildlife in Puerto Rico are truly a spectacle, but what intrigues me even more, perhaps, is the prospect of lost treasure. While the names “Blackbeard” and “Captain Kidd” are well-known through popular literature, one of the most infamous and feared pirates of the 1800s was La Pirata Cofresi. Born in Puerto Rico while under Spanish rule, Roberto Cofresi had a sour dealing with a U.S. cargo ship, and was severely beaten for “tasting” the sugar. The resulting bitter taste in his mouth eventually drove him to peril.

Cofresi grew up poor, but not without ambition. In 1818, he became a pirate, and focused his attacks on U.S. vessels. Considered a “Robin Hood” folk hero and patriot, Cofresi’s endeavors were ignored by the Spanish government as long as he left Spanish vessels alone. For years, he and his crew sailed the Caribbean in the schooner “El Mosquito,” operating from a hideout on the island of Vieques (vee-A-kess) just off the mainland east coast. After capturing a ship, he would often take hostages and nail them alive to El Mosquito’s deck. Legends say they hid their treasure in a secret cave on Mona Island, 40 miles (64 km) west of the mainland.

In 1825, Cofresi and his crew attacked a group of eight merchant ships, one of which was U.S.-flagged. The U.S. Navy sent the USS Grampus in pursuit of the pirates, and Cofresi and his crew were captured and ultimately imprisoned in San Juan at El Costillo Del Morro. They were tried, found guilty and executed by firing squad. The treasure of El Pirata Cofresi has never been found.

What sets Puerto Rico apart from many Caribbean dive destinations is the treasure chest of attractions that capture the imagination of divers and nondivers alike. Old San Juan, with its numerous shops, restaurants and museums, is an idyllic place to spend a day (or two or three). Of peak interest are the two forts — El Morro on the east side of the islet, and Castillo San Cristobal on the east side of the city — that protected the city and port for more than 100 years. These beautifully restored forts are run by the U.S. National Park Service.

Another “must see” attraction is Arecibo Observatory, home to the world’s largest radio telescope, 50 miles (80 km) west of San Juan. Made famous by such movies as “Contact” (1997, Jodi Foster and Matthew McConaughey) and the James Bond thriller “GoldenEye” (1995, Pierce Brosnan), the Arecibo Observatory has been home to the SETI (Search for Extraterrestrial Intelligence) project, and numerous other projects funded by government and private organizations.

The main collecting dish for the radio telescope is 1,000 feet (303 m) in diameter, set in a karst sinkhole to form the largest curved focusing dish in existence. Its surface is made up of 38,770 3-by-6-foot (0.9 by 1.8 m) perforated aluminum panels. With three transmitters, and a receiver mounted on a 900-ton (405 kg) platform suspended 500 feet (152 m) above the dish, it is truly an amazing sight. Tours are offered through the Ángel Ramos Foundation Visitor Center, which features interactive exhibits and displays explaining the radio telescope, astronomy and atmospheric science. It is open to the public Wednesday through Sunday, with additional hours available on holidays and school breaks.

Another mainland attraction is the El Yunque National Forest, just 45 minutes east of San Juan. El Yunque is the only tropical rain forest within the U.S. National Forest system. Set aside in 1898 by the king of Spain, the park boasts paved hiking trails, with picnic facilities and food vendors along the main roadways. Begin at the visitor center where you’ll find books, guides, displays and other information.

Beyond jungle-lined cascading rivers, waterfalls and vistas, the rain forest is home to more than 200 species of trees and plants, 23 of which are found only in El Yunque. Several endangered species can be found in El Yunque, not to mention the rare Puerto Rico Parrot. No single creature is more beloved than the Coqui, a tiny tree frog, 13 species of which are found in El Yunque. There are no dangerous snakes in the rain forest, and no malaria or yellow fever, but there is dengue, so a liberal dose of insect repellent is a must. Camping is allowed by permit only, but there are no designated areas or camping facilities.

For divers and nondivers alike, Puerto Rico is truly a “Rich Port.” Come to escape the ordinary, and melt into the mystery, legend and intrigue of a tropical Caribbean paradise.