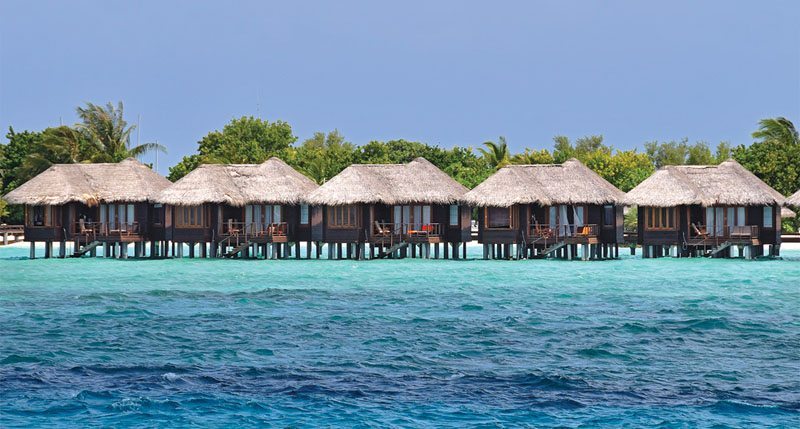 “Jump!” screams the divemaster, just after someone yells, “whale shark.” Suddenly I’m in the water and nearly eye to eye with a whale shark. I fire a few frames and then the spotted 20-foot (6 m) juvenile is already past. This plankton-feeding animal did not seem to be moving fast when observed from the boat, but the “in water” perspective is altogether different. The camera drag and surface current make me feel like I am tethered in place, as I simply cannot keep pace. In an instant the massive creature disappears from sight.

We repeat this same wonderful, but exhausting exercise three more times with different sharks as we make our way to the mother ship. The more I learn about the Maldives, the more I understand that the fruits of paradise are gained and only truly savored through sacrifice.

Jeweled Necklace of the Indian Ocean

The Maldives is an island nation of 26 geographical atolls that collectively resemble an elongated, jeweled necklace running north/south and situated slightly above the equator in the Indian Ocean. An atoll, which is derived from the Maldivian word atholhu, is the product of fringing reefs that originated from the sides of a volcano and then continued to grow toward the surface as the volcano receded back to the ocean floor. The resulting ring-shaped barrier reefs have a foundation of lava and dead coral, protect a central lagoon and are separated from each other by channels that lead from the lagoon to the sea. Since atolls are built from colonizing corals, they are limited to tropical and subtropical oceans that possess the warm water and plentiful nutrients needed to support such creatures.

The Maldivian atolls, which are part of the submarine mountain range called the Laccadives-Chagos Ridge, are intermittently spread over 56,000 square miles (145,600 sq km). They protect almost 2,000 islands, only 200 of which are inhabited. About 99 percent of the Maldives is ocean and only 186 square miles (484 sq km) of the country is above the water’s surface. 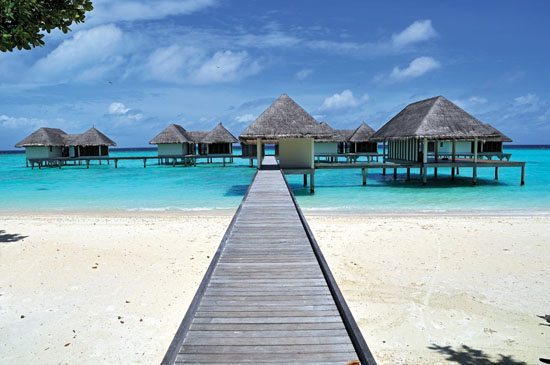 The Maldives has a pleasant tropical climate primarily defined by two distinct monsoon seasons that affect both the topside and underwater environments. The Iruvai or northeast monsoon typically blows from mid-November to April. It is considered to be the “dry” winter. The prevailing underwater currents shift and start flowing from the northeast. This increases the visibility and rearranges the marine life activity on the atolls. Soft corals thrive on the upcurrent, eastern fronts, while big animals become more active on the down-encounter, western edges.

The Hulhangu or southwest monsoon is the “wet” summer and generally prevails from May to October. The terms “winter” and “summer” are misnomers, as Maldivian daytime air temperatures stay near 86 degrees Fahrenheit (30 degrees Celsius) year-round. During the Hulhangu, the winds and underwater currents can be stronger and arrive from the west/southwest. Plankton blooms also tend to be larger and more concentrated during this period, which can reduce the visibility, but increase the sightings of large pelagics, especially on the eastern edges of the atolls.
April, May, October and November are often transitional months when one monsoon is ending while another begins. The only guarantees are the sun will shine and rain will fall, sooner or later.

The Maldives is in the heart of the Indian Ocean shipping lanes. This has been both a blessing and curse in the outside world’s effect on its culture and way of life. The Maldivian history prior to A.D. 1153 is a mixture of conjecture and legend due to the lack of written materials and artifacts. The earliest inhabitants likely migrated from India (381 miles [610 km] between Malé, Maldives, and the southern India coast) and Sri Lanka (476 miles [762 km] between Malé, Maldives, and the eastern Sri Lanka coast). Sailors and traders braved the treacherous Maldivian reefs to collect fresh water, dried fish, fruit, coir (coconut husk) rope, cowry shells and other important items. In fact, the Maldives was once called the “Money Isles” due to its abundance of cowry shells, which were accepted currency from Africa to China until the early 16th century. These shells are now the symbol of the Maldives Monetary Authority.

Buddhism was the predominant religion for hundreds of years until Abu Al Barakat, a North African Arab scholar, converted the Maldivian King to Islam in 1153. The king became a sultan and his kingdom was transformed into a strict Sunni Muslim nation. This sultanate form of government evolved into a presidential republic in 1968, but the Maldives remains a country that mandates its citizens be Sunni Muslim and practice no other religion. 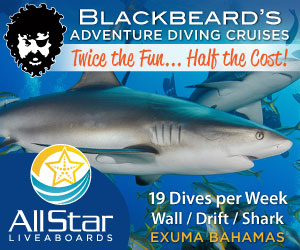 The Maldives was a British protectorate from 1887 to 1965. This arrangement provided the British with an annual appreciation fee, the rights to dictate the Maldivian foreign affairs and a continuous presence in a key region, while the Maldives received much-needed protection for its shores and a noninterference commitment on all domestic matters. The Maldives regained independence from Britain on July 26, 1965. 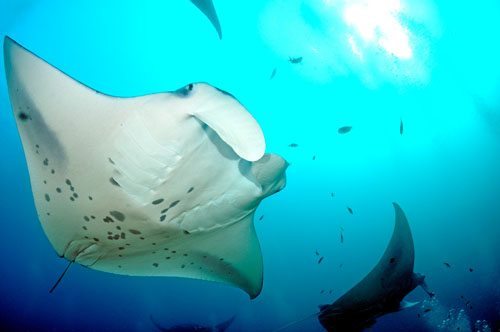 The natural underwater beauty of the Maldives is even more rich and extravagant than any man-made setting on land. More than 1,000 species of fish and 200 species of coral are present. The color, variety and action can be a bit overwhelming if you take the time to soak in the entirety of your surroundings. rays For example, I made three consecutive dives on a manta ray (Manta birostris) cleaning station in Hanifaru Bay, Baa Atoll. On the first dive, I used a Tokina 10-17 mm fisheye lens to photograph four majestic rays that repeatedly circled the site as they were cleaned by industrious bluestreak cleaner wrasse (Labroides dimidiatus). The second tank and a 60 mm lens allowed me to frame an exquisite, white leaf scorpionfish (Taenianotus triacanthus) as it yawned and seemed to proudly pose. The third dive and a super macro set-up yielded shots of a male coral cardinalfish (Apogon properupta) incubating eggs in its mouth. The manta ray, leaf scorpionfish and coral cardinalfish were often within 20 feet (6 m) of one another throughout the day. I needed three dives and three alternative perspectives on this tiny site to even begin to appreciate some of the wonderful treasures it had to offer.

I spent a week at Hanifaru Bay working from Guy Stevens’ research dhoni. (A dhoni is the typical Maldivian dive boat, which is both basic and slow moving.) Guy, a marine biologist whose work is supported by the Save Our Seas Foundation and the Four Seasons Resort at Landaa Giraavaru, is the founder of both the Maldivian Manta Ray Project and Manta Trust. a pretty coral His passion for the Mantas, Hanifaru and marine conservation is clearly evident. Guy spends long days with his research assistants identifying and tracking the elegant rays, as well as studying their behavior from the surface and underwater.

When the conditions are right, a veritable buffet of plankton flows into the bay and gets trapped. This causes some unknown dinner bell to ring and prompts hungry mantas to arrive en masse. Guy has frequently spotted as many as 200 mantas and multiple whale sharks with their maws agape, feeding on the plankton. The discovery and subsequent fame of the Hanifaru Bay Plankton Party has brought about extensive tourism use — and the need for protective legislation. Guy and the rest of the Baa Atoll community worked out a management plan for Hanifaru Bay with members of the Ministry of Housing and Environment. The Management Plan for Hanifaru Marine Protected Area is part of the Atoll Ecosystem Conservation Project that limits the number of snorkelers and provide funding for the ongoing conservation efforts. 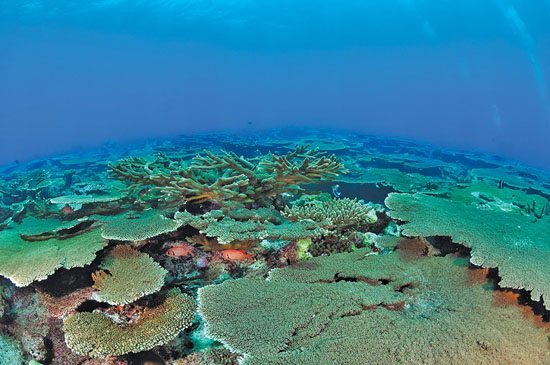 The Marine Discovery Center at the Four Seasons Resort at Landaa Giraavaru is at the forefront of numerous critical conservation efforts. In response to a 1998 mass coral bleaching event that killed 90 percent of the coral above 45 feet (15 m), the center launched a coral propagation project with Reefscapers that has transplanted almost 70,000 coral fragments since 2005, with a survival rate of 80 percent. The primary goal of this project is to develop heartier strains of coral that are more resistant to prolonged water temperature spikes. Healthy reefs play vital roles in sustaining the marine life, fueling the growing tourism industry and protecting the Maldivian flat islands from high waves that could decimate the nation.

The Maldives is the lowest country on Earth, with an average ground level of only 5 feet (1.5 m). Its highest point is only 8 feet (2.4 m). Scientists have predicted rising ocean levels may make the Maldives uninhabitable by 2100. The nation’s current president, Mohamed Nasheed, held the world’s first underwater cabinet meeting October 17, 2009, to sign a resolution, “SOS From The Frontline,” calling for global cuts in carbon emissions. The document was presented at the Climate Summit in Copenhagen, Denmark, two months later. The president has committed to making the Maldives the first carbon-neutral country by 2020 and is setting aside a portion of the country’s annual tourist income to purchase land in India, Sri Lanka or Australia for his people should global warming drown paradise. 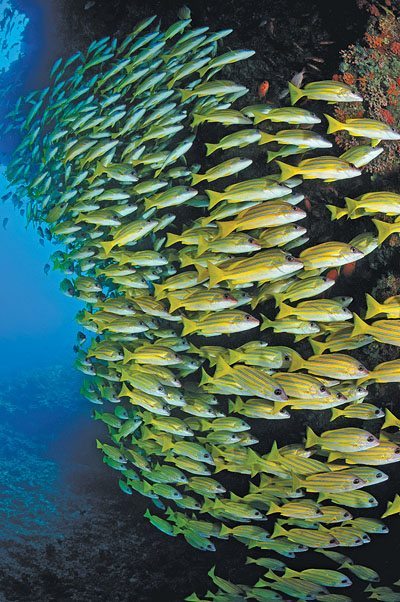 Maldives’ diving is almost as varied as its marine life. It is defined by a reef’s formation, size and depth as a kandu, faru, thila, giri or falhu. A kandu is a channel that connects a lagoon to the open ocean. These dives often produce strong currents and should only be attempted on an incoming tide that carries divers into the safety of the lagoon. An inflatable signal buoy and audible signaling device should be considered mandatory accessories when equipping for this kind of diving. The incoming tide also provides much better visibility than the outgoing variety. A faru is a circular reef within a channel that extends to the surface. Its outer edge is exposed to the open ocean and often a prime location for spotting pelagics and large schools. Thilas are oblong or circular reefs within an atoll with tops 20-40 feet (6-12 m) below the surface. Their steep walls are pocked with overhangs that are lined with soft corals and filled with fish. A giri is like a thila, but smaller and reaching within 5-10 feet (1-3 m) of the surface. Falhus are shallow reefs facing into atolls. Dives can be tailored to a guest’s certification level if operators are given enough notice to allow them to group divers with similar skill sets.

Currents carry you along healthy reefs adorned in hard and soft corals. Brightly colored anthias dart among coral heads, while large schools of bluestripe snapper and neon fusiliers move in unison as they cling to or sweep over the reef.

There is little to do on land in the Maldives, except relax, soak up some rays, get to know the friendly locals and/or try other water activities, such as surfing. My favorite pastime was watching the large fruit bats (Pteropus giganteus ariel), which were active around the clock. Most fruit bats I have encountered elsewhere stay hidden during the day, but the Maldivian bats do not have to worry about predators and thus do not fear the sunshine. The best time to photograph them is in the evening when they are feeding on fruit.
Malé, the Maldives’ bustling capital, is a short boat ride from the Malé International Airport, which, like the many luxurious resorts, is located on its own island. Malé is packed with people and offers sightseeing options, such as the National Museum and the Grand Friday Mosque. It is worth a short visit at the end of your holiday as you wait for your flight home, but the experience will likely leave you wanting to return to the solitude of a secluded atoll. 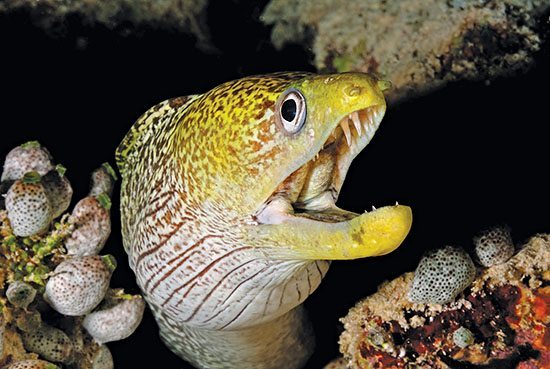 You can only explore a fraction of the Maldives’ expansive territory during a single visit. The Maldives is definitely a multitrip destination. I highly recommend splitting your time between a live-aboard and a land-based resort. Indulge yourself in the “Luxury Isles.” Then figure out how you can return as often as possible.

Story and photos by Scott Johnson