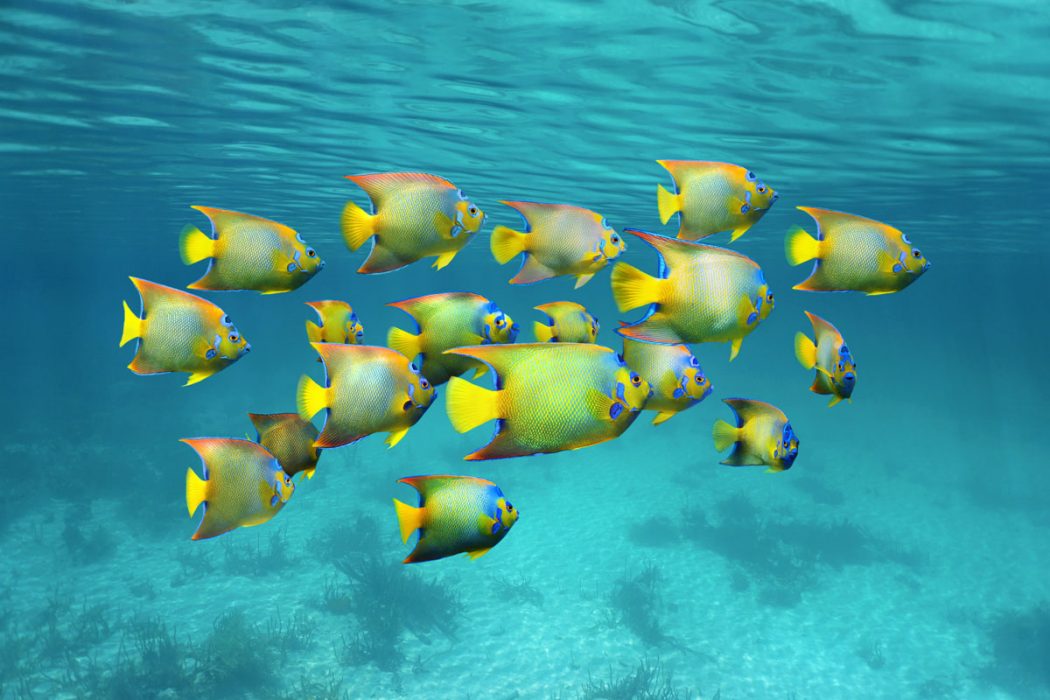 That’s the latest from the world of piscine anatomy, and it’s not without controversy. In fact, it’s turning into a big case of international scientific “he said, she said.” At the heart of it all is a question about how different human animals are from the rest of the natural world, and how we think about the animals we share a planet with.

Last year, Lynne Sneddon, a professor of animal biology at the University of Liverpool, in England, published a study in which she tried to provoke pain in fish. Not just an “owwie,” mind you, but actually “pain” — a sensation of equal parts physical discomfort and emotional suffering usually reserved for creatures with big brains.

Sneddon divided her captive rainbow trout (Oncorhynchus mykiss) into four groups. One was injected in the snout with bee venom, and another with acetic acid. For you fish-and-chips fans with a taste for irony, that’s the acid in malt vinegar. Both are chemicals commonly used to test pain in laboratory research. A third group was injected with saline as a control group, to determine if the needle poke was the source of the reaction. The fourth was handled by researchers, but not injected, to rule out the stress of the experiment being the cause.

At the heart of Sneddon’s research was the importance of a group of neurological sensors around the fishes’ mouth called nociceptors. In her research, Sneddon identified 58 of them in the fish’s face and head that were triggered by a chemical, mechanical, or temperature stimulation. These sensors, designed to warn their owner about “noxious stimulation,” are the frontline defenses against repeatedly impaling oneself on sharp objects. They cause an unconscious pulling away from things that damage the body. They’re hard-wired into the hind brain, the central processor of life that controls such things as breathing, circulation, movement, eating, drinking, and involuntary reflexes. Humans have a system very much like this.

“Anomalous behaviors were exhibited by trout subjected to bee venom and acetic acid,” Sneddon says. “Fish demonstrated ‘rocking’ motion, strikingly similar to the kind of motion seen in stressed higher vertebrates like mammals, and the trout injected with acetic acid were also observed to rub their lips onto the gravel in their tank and on the tank walls. These do not appear to be reflex responses.”

That reaction fulfills a set of criteria for animal suffering, Sneddon says. To make sure, she gave fish morphine to see if they “felt better” after treatment. Sure enough, their respirations slowed and they stop swaying. So that settles it. Fish feel pain.

Not so fast. James Rose of the University of Wyoming Department of Psychology and Department of Zoology and Physiology disagrees. Studying the neurological structure of a fish brain, Rose concludes fish can’t possibly feel pain, even if they display a few suspicious-looking behaviors, because they don’t have the brains for it.

According to a medical definition, pain is an unpleasant sensory and emotional experience associated with tissue damage. It’s so subjective that everyone feels it differently, and you can feel it even if you haven’t actually mangled yourself. The key is the emotional component. In order to suffer, your brain needs wiring that lets it feel both sensation and emotion. That’s the problem, Rose says. In fish, there’s not a snowball’s chance because they don’t have the hardware to have a consciousness.

Sneddon uses a looser definition of pain that’s widely used in animal-based research. If the animal has basic neurological structure, including nociceptors connected to a central nervous system, the ability to naturally create painkillers called neuropeptide opiates, a proven reaction to analgesics, and humanlike reactions to pain, it’s a winner.

Not all fish pass the test, she says. Sharks and rays, both members of the family elasmobranchs because they have cartilaginous skeletons, don’t have nociceptors. Trout, a member of the teleost family of fish with bony skeletons, do have the collection of pain processors, and they do seem to react like humans would. So she votes yea.

But just because it looks like pain, and it acts like pain, doesn’t mean it really is pain, Rose says. And he’s got a pretty good argument, grounded in the fundamental rule of neurobiology: If the apparatus isn’t there — which it’s not in fish — the sensation isn’t either. He votes no.

Beyond nociceptors, human brains and fish brains don’t have much in common, according to Rose. A trout brain looks like a short, thin rope with a knot tied in it. The midbrain knot is mostly the optic lobe, but also includes the hippocampus for memory and pituitary gland for growth and reproduction. Aft of the knot is the cerebellum and brainstem. On the short end in front of the knot are the cerebral hemispheres, most of which are occupied by the olfactory lobes.

Like all mammals — and unlike all fish — the cerebral hemispheres of humans are bigger than the brain stem. The frontal, temporal, and parietal lobes of the brain work with its outer layer, called the neocortex, to provide “primary consciousness” — the ability to know what’s going on at any given time, the ability to follow commands, and the ability to use verbal or nonverbal communication. This part of the brain allows a lab rat with arthritis to choose to drink from bad-tasting water containing painkillers instead of sweetened water, which is preferred by rats without the condition. In animals where the neocortex is particularly well-developed — humans and some other primates — it’s also home to “high-order consciousness,” which includes language, creativity, autobiography, and the desire to ask abstract questions, such as this one.

Remove the cerebral hemispheres, and a fish still pretty much acts like a fish, albeit one with no sense of smell. Do it in a human and you get a person in a constant vegetative state. Take a little less brain, specifically just parts of the frontal lobe — a lobotomy – and the patient may shout at a “painful” jolt, but they don’t report the experience as being particularly unpleasant.

If, anatomically speaking, fish can’t feel pain, why do they act like they can? When hooked by fishermen, trout and sharks react in much the same way — by thrashing, darting, and pulling. Sharks don’t have pain nociceptors, and they don’t have pain-transmitting nerves like humans or trout. Rose suggests the animals are simply trying to escape, an unconscious flight reaction to being pulled in a direction they don’t want to go. And even though trout produce their own internal chemical analgesic, those hormones probably have additional roles besides numbing pain, such as speeding up healing, as they do in humans.

Snow suggests the rocking of Sneddon’s injected fish may actually be a neurological reaction to the high dose of toxin in bee venom — the dosage was equivalent to a 3-ounce injection into the lip of a normal adult human. That dosage may be so high that it’s causing neurological problems for the fish, causing it difficulty in staying upright. In fact, he suggests Sneddon’s research may indicate fish actually have an amazing resilience to pain, because they returned to feeding in only three hours after the traumatic toxin poisoning.

He’s also not buying the idea that fish may feel pain in their own way. It takes a lot of brain power for primates to have even primary consciousness — entry level on the pain scale. The odds are slim that fish can do that with a smaller setup. “To propose that fishes have conscious awareness of pain with vastly simpler cerebral hemispheres amounts to saying that the operations performed on the modern computer could also have been done by the 1982 model without additional hardware and software,” he says.

Ultimately, “if it looks like pain, it is pain” isn’t a good definition, he says. Humans born without cerebral hemispheres will still show facial signs of “pain” when exposed to noxious stimuli, even though they’re permanently unconscious. Likewise, people with spinal cord injuries may reflexively pull away from a pin prick, even though they can’t feel it. Both are nociceptor reactions.

As it is, no one’s really sure what fish feel, and they aren’t talking. Certainly, they don’t experience the world as primates do, but, apparently, trout don’t experience it like sharks, lungfish, electric rays, or tuna, either, because those fish have significantly different brain structures, suited to the niche each has evolved to fill.

A big clue to answering the pain question would be if fish would seek analgesic relief from pain if given the chance — if they would self-medicate, like the arthritic rats. No one’s tried that yet. So would observations that differentiate stress from pain behavior. Some birds and reptiles will show guarding behavior until they’re spooked, apparently unable to process both at the same time. More research into fish brain structures may lead to more definitive answers — even about how all brains work. New research from the University of Manchester seems to indicate fish can regrow injured brain tissue. Human brains can’t do that — but finding out how it works in them may help us figure out how it might work in us.

A Fine Kettle of Fish

But from here, a mildly intriguing academic argument gets messy.

Sneddon and her colleagues began their study out of concern for the welfare of animals in commercial fish farms. With that motivation, and those results, their research was quickly cited as “good news” for animal-rights activists opposed to recreational fishing. In fact, one group wrote the president of the University of Wyoming to protest Rose, asking him to rescind the professor’s research because it was so clearly biased by Rose’s self-professed status as a fisherman. That’s not what university presidents do, the president reportedly replied.

For his part, Rose thinks a whole lot of energy is wasted discussing fish pain. Anthropomorphizing fish doesn’t solve their biggest problems, which really don’t have anything to do with whether they have a consciousness. This much effort should be made to answer bigger questions of conservation, including water quality, water temperatures, and habitat protection, he says.

“[My] conclusion in no way devalues fish or diminishes our responsibility for respectful and responsible stewardship of them. Fishes constitute a highly evolved, diverse, and complex life for whose history on the Earth vastly eclipses the brief existence of humans,” Rose says. “Our increasingly deleterious impacts on fishes at the population and ecological levels require us to use our best scientific knowledge and understanding to foster their health and viability.”

In other words, the issue isn’t whether they feel pain. It’s this: If we want them around, we’re the ones who have some thinking to do.

Just because it looks like pain, and it acts like pain, doesn’t mean it really is pain — at least according to one researcher.

Sneddon, L.U., Braithwaite, V.A., and Gentle, M.J. “Do Fish Have Nociceptors: Evidence for the Evolution of a Vertebrate Sensory System.” Proceedings of the Royal Society, series B. 2003.

Grandin, T., and Deesing, M. “Distress in Animals: Is it Fear, Pain, or Physical Stress?” www.grandin.com/welfare/fear.pain.stress.html.