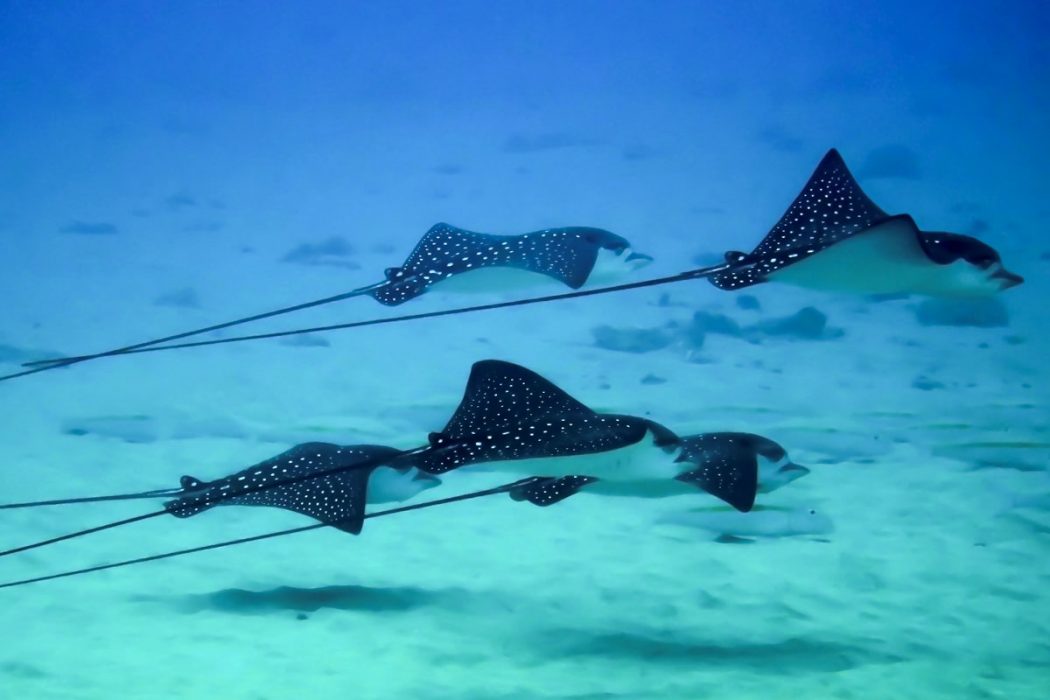 Some bury themselves so well in sand bottoms that all you see is a faint outline of their bodies. Others rest out in the open on the sea floor and are relatively easy to spot. Some appear to “fly” with extraordinary grace while still others undulate their fins to propel themselves.

Some have potent spines, or “stingers” on their tails. Others have no barb at all, and still others possess the ability to deliver a potent electric shock. Some weigh more than 2 tons while others can fit into the palm of your hand. Some species have long whiplike tails, and others very short tails. The bodies of some are protected by numerous “thornlike spikes,” while the bodies of many others appear relatively smooth.

They, of course, are rays, a diverse group of about 500 species of fishes that are a welcome sight on any dive. It might surprise you to read that rays are fishes, but this is no misprint. Rays are fishes whose skeletons are composed of cartilage, not bone. So, while the vast majority of fishes have bony skeletons and are described in the class Osteichthyes, rays, sharks, skates and ratfishes possess skeletons made of cartilage, and are described in the class Chondrichthyes.

Rays are believed to have evolved from sharks. The earliest rays are thought to have appeared on Earth about 150 million years ago during the Jurassic period. Because rays lack bones, fossil remains are extremely rare, however, their teeth are composed of very hard enamel, and they are prone to fossilization.

Modern rays inhabit oceans, seas, bays and estuaries around the world. Many species live on or near the sea floor while others live in the water column and are adapted for continuous swimming. Some rays are commonly found very close to the shoreline while other species live in the extreme depths of the sea down to 10,000 feet (3,000 m).

On the whole, the bodies of rays have a generally flattened shape and an elongated tail. Having been greatly modified over the eons, their pectoral fins are relatively large. The pectoral fins are connected to the rest of the body and together the body and pectorals form the “disc.” The tails of rays also vary from the short, stubby tail of some electric rays to the more than 10-foot- (3-m-) long whiplike tails of some stingrays.

The skin of rays is composed of modified scales known as dermal denticles (also known as placoid scales) that look like “miniature teeth.” Rays possess five to seven pairs of slitlike gill openings on each side of the head along the underside of the body.

Rays propel themselves with their powerful, winglike pectoral fins that undulate, or ripple, in some species and that beat like more semirigid wings in others. Their enlarged pectoral fins also help enable rays to glide through the water column without sinking too rapidly. Many species of rays can swim fast enough that they can “jump” above the surface, providing a momentary thrill for onlookers. The bodies of numerous species are coated with a slimelike mucous that reduces friction, or drag, as the rays swim, thus increasing their efficiency and swimming speed.

As is the case with sharks, rays lack the internal organ known as a swim, or gas, bladder that is found in many bony fishes. The swim bladder is used to help control the buoyancy as well as ascent and decent rates in bony fishes. This means that when a ray stops swimming it will sink toward the sea floor unless the animal is buoyed up by a current or upwelling. Rays have a comparatively large, oily liver that helps maintain their buoyancy as oil is positively buoyant in water. In addition, having a relatively lightweight skeleton made of cartilage helps rays efficiently maintain buoyancy.

Like sharks, rays have an advanced electroreceptive system. Specialized gel-filled pit organs known as ampullae of Lorenzini that are concentrated in the skin around the head and snout enable rays to detect the electrical fields that are emitted when other living creatures contract a muscle or their heart beats, etc.

Reproduction in rays varies from species to species. While fertilization is always internal, some rays bear live young while other species lay eggs. Compared with bony fishes, the gestation period of rays is relatively long and comparatively few offspring are reproduced in each mating cycle.

Manta rays, Manta birostris, are the largest of all the rays, attaining “wingspans” of just over 20 feet (6 m) and weighing more than 4,000 pounds (1,800 kg). Yet these rays are incredibly graceful and remarkably efficient. While capable of rapid bursts of speed, these majestic animals are typically encountered as they glide effortlessly through the water with almost imperceptible movement of their winglike pectoral fins. But don’t let their relaxed swimming speed deceive you. They are capable of incredibly rapid bursts of speed, and can disappear even in relatively clear tropical and subtropical waters with only one or two beats of those mighty pectoral fins. And even when those huge “wings” don’t appear to move at all, manta rays can easily glide faster than divers can swim.

The good news is that manta rays often demonstrate a sense of curiosity about humans, and readily approach snorkelers and divers. The encounters are known to last for several dives as long as no one tries to grab or ride the rays. Riding mantas was once a popular activity with some divers, but these days ray riding is generally frowned upon because it can be harmful to the mantas; contact can remove layers of mucous that serve to protect their skin. 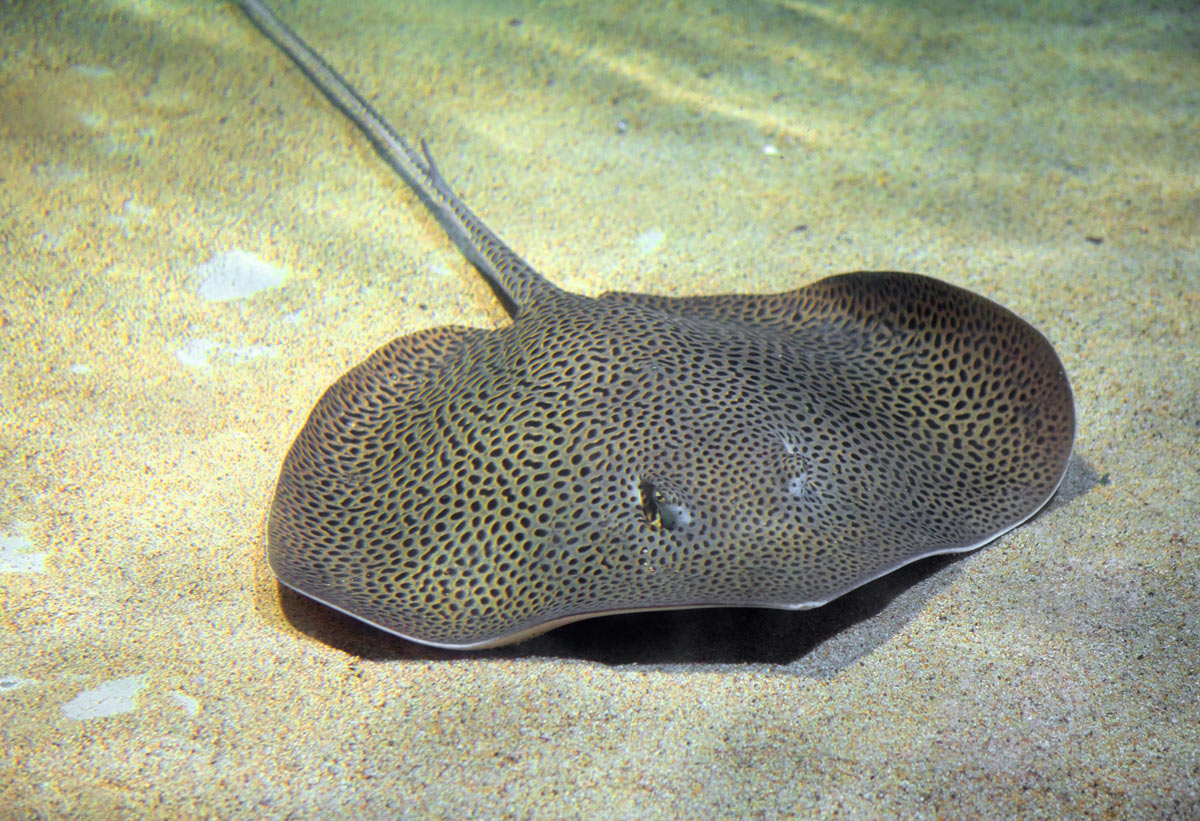 A variety of rays possess one or more spinelike barbs attached near the base of their tails. This group includes the large, commonly seen, bottom-dwelling rays known as Southern stingrays (Dasyatis americana), which inhabit waters from New Jersey to Brazil as well as throughout the Caribbean. Southern stingrays grow up to 5 feet (1.8 m) across, although many specimens are considerably smaller. These rays are the “stars of the show” at Grand Cayman’s world-famous Stingray City.

The barbs of stingrays, usually protected by a sheath, are used to ward off threats and can inflict painful injuries. Many, but certainly not all, stingrays are bottom dwellers, and when at rest on the sea floor, their best defense from would-be predators, especially sharks, is a well-directed, forcefully delivered spine. The bodies of stingrays are amazingly supple and they can strike targets that are to their front or sides, and they can whip around in the blink of an eye to defend against a threat from the rear. It is not uncommon for fishermen in various parts of the world to catch sharks, especially hammerheads, that have stingray barbs stuck in their snouts.

Getting struck by the spine of a stingray is painful, to say the least. In some instances nausea and difficulty breathing result. In some cases, nasty infections follow, so if you do get hit, you should seek immediate medical attention.

Stingrays use an interesting adaptation that enables them to respire even when they are almost buried by sand. These rays possess large openings known as spiracles that are high atop their head immediately behind their eyes. Oxygen-rich water is taken in through the spiracles and is then passed over the sensitive gill tissues where oxygen can be removed. Then, the water flows out of the body through the gill slits that are on the underside of the body and that are often pressed flat against the sea floor.

Most bottom-dwelling stingrays prey upon a variety of fishes, worms, clams and crustaceans found in sea grass beds and on sand flats. The rays dig through the sand to find their prey, which they crush with their large powerful jaws. When feeding, stingrays are often accompanied by a variety of other fishes such as wrasses, goatfishes and jacks that are quick to rush in and grab prey uncovered by the hunting rays.

Few sights in the marine world are as captivating as that of a squadron of spotted eagle rays (Aetobatus narinari), marble rays (Taeniura meyeri) or bat rays (Myliobatis californica) cruising through clear waters. It is believed that these stingrays, like many other species, commonly school when mating, but some specialists suspect that the rays also school at other times.

A family of rays that often gets overlooked, especially when the topic is size or beauty, is one that comprises about 69 species of electric or torpedo rays. Many species in this family of medium- to small-sized rays are also commonly known as numb rays or numbfish. In short, to many people these rays look like the proverbial “ugly sisters” in the world of rays. On the whole, electric rays are poor swimmers as they lack certain muscles present in other rays that assist in swimming. However, what electric rays lack in beauty and speed, they more than make up for with their highly developed electrical organs. The electrical organs are composed of muscle tissue in which the normal electrical generating capacity is greatly increased. These specialized organs are built with stacks of cells that function in a manner like the cells in batteries. A series of large nerve trunks enable the rays to have voluntary control over these organs, thus empowering the animals to discharge electrical charges at will.

The output of current lasts only for a short period, but a burst can pack a very powerful jolt, up to 200 volts in some species. Electric rays typically use their current-producing ability to ward off predators and to stun their prey.

Because electric rays are relatively poor swimmers, they are vulnerable to predators immediately after emitting a jolt of electricity because it takes both time and energy to ready the next charge. So, you can rest assured that electric rays do not unleash charges frivolously, and that’s good news for humans. While contact with many species of electric rays can bring tears to your eyes, you are unlikely to suffer any long-term consequences, other than remembering that next time you want to give these rays a little more room.

Sighting any ray is guaranteed to make any dive memorable, and having some knowledge of the animal’s natural history is sure to enrich your experience.

Most stingrays are bottom-dwelling animals that can be difficult to see because they bury themselves in the sand and because they alter their body color and patterning to blend with the substrate. Knowing this, it is a good idea for snorkelers and divers to “shuffle” by sliding their feet along the sea floor in sandy areas when entering and exiting the water. This entry-and-exit technique is known as the “stingray shuffle.” Stingrays are well-equipped to sense the vibrations caused by the shuffling, and preferring not to get stepped on, stingrays will typically swim away.