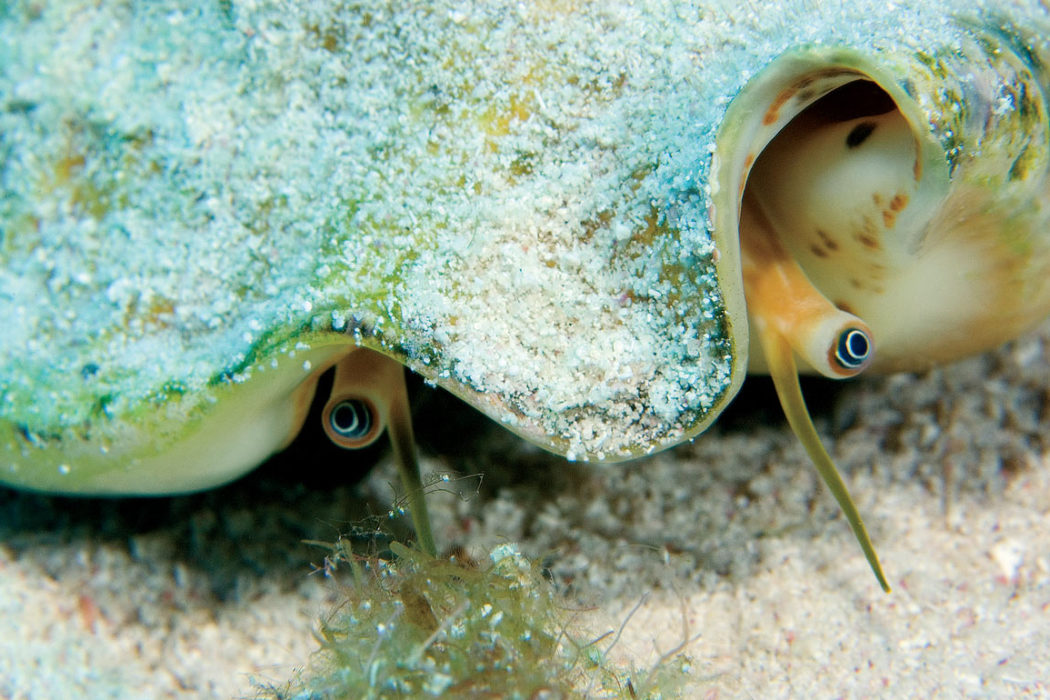 The queen conch (Strombus gigas) — pronounced “konk” — is a marine snail or gastropod. It is actually a soft-bodied mollusk that resides inside a large flared shell. Photo by Karen and Ian Stewart.

No visit to the Florida Keys (and in particular Key West) would be complete without trying out some delicious conch fritters or a steamy bowl of creamy, thick conch chowder. However, this delicious mollusk is no longer a locally provided delicacy but has been imported from the neighboring Bahamas and various Caribbean countries for the past 25 years. Over-harvest has been the key contributor to the lack of local conch. Reduced conch populations led to the banning of commercial harvesting of queen conch in the Keys in 1975, and a ban on all commercial and recreational harvest of the species was enacted in 1986.

Will our overzealous love for fritters lead to the eventual disappearance of the queen conch forever or can some of the revitalization and protection efforts now under way continue the queen’s reign?

The queen conch (Strombus gigas) — pronounced “konk” — is a marine snail or gastropod. It is actually a soft-bodied mollusk that resides inside a large flared shell. The queen conch, like all snails, has a single foot with which it propels itself across the ocean bottom. In the case of the queen conch, this foot is narrow and ends in a claw called an “operculum.” The operculum also serves as a defense against predators and for righting the conch when the shell has tipped upside down. It is the foot that also contains the meat used to make those delectable conch fritters and chowder.

The shell is the most striking feature of the queen. The pearly interior can be pink, orange or yellow while the outside of the shell is marked by spines that project from each whorl of the spiral. All queen conchs are “right handed” — if you look at the shell from the pointed crown, the spiral coils to the right. The shell can be as long as 12 inches (30.4 cm) and can weigh as much as 5 pounds (2.3 kg). The life span can range from seven to 15 years in Florida but longer in Caribbean locations.

The queen conch lives in sand, sea grass beds and coral reef habitats. It is found in warm, shallow water and is generally not found deeper than 70 feet (21 m). Queen conch feed on several types of algae. The queen grows very slowly, even with adequate food sources, since they expend considerable energy interacting with other conch.

The queen conch reaches sexual maturity at 3 to 3.5 years of age, when their flared lip is fully formed and growth in the shell length ceases. Breeding takes place from March to September. Changes in temperature and weather launch the onset of the reproduction season. Eggs are laid in egg masses over 24-36 hours following fertilization. Hatching occurs three to five days after that. Queens have a pelagic larval stage and settle when shell length reaches 0.04 inches (1 mm). Juveniles are rarely seen in the wild because they remain buried in the sand (up to 8 inches [20 cm] deep) until they are about 1 to 1.5 years old or 2 inches (5 cm) long. Even with this defensive strategy, up to 60 percent of the young conch succumb to predators such as crabs, lobsters, filefish and shrimps. Once the young conchs have emerged from the sand they are preyed upon by other gastropods, crustaceans, sea stars, rays, sharks, bonefish, and even the loggerhead sea turtles. None, of course, compare to the effect man has had on these populations. 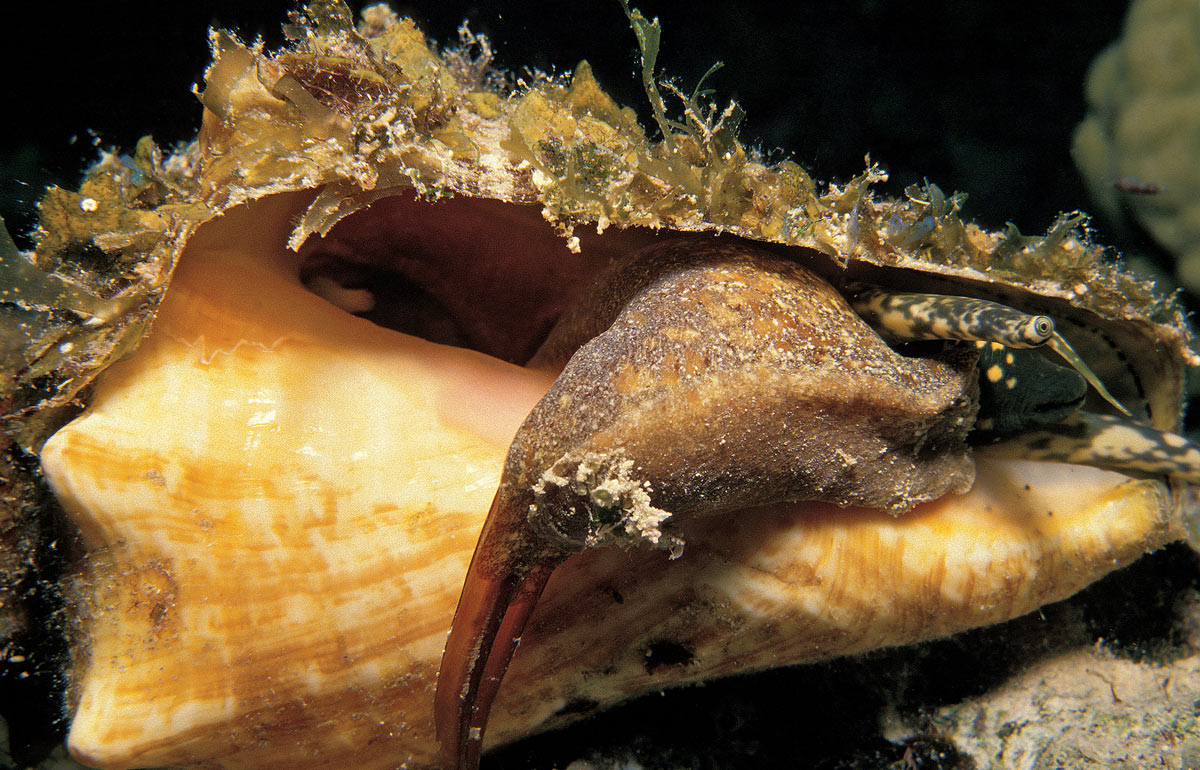 The queen conch has a single foot that is narrow and ends in a claw called an “operculum.” The operculum serves as a defense against predators and for righting the conch when the shell has tipped upside down. Photo by Karen and Ian Stewart.

For centuries, the queen conch has been a major source of protein for Caribbean nations and its shell has been used for tools, weapons, jewelry, ceremonial objects and construction material.

Conch are particularly susceptible to overfishing because they are slow to mature, taking three years and more to grow to harvest size in the wild. The queen conch’s shallow habitat close to shore has also made it a prime target for overfishing. Likewise, the development of improved diving gear and freezer storage has added to the decline of the fishery throughout its region. Water quality has also had an effect on queen conch population densities. Reports by the Fish and Wildlife Research Institute suggest that the declining water quality of inshore breeding areas has been one of the key deterrents to conch recovery along the Florida coastline.

In 1992, because of the population decline and the queen conch’s slow maturation, the Convention on International Trade in Endangered Species (CITES) added the species to their Appendix II list. This list consists of organisms that may be threatened with extinction unless trade is strictly regulated. Queen conch was the first large-scale fisheries product to be regulated by CITES.

The United States currently prohibits import of queen conch (including meat, shells and live animals) from Antigua and Barbuda, Barbados, Dominica, the Dominican Republic, Haiti, Honduras, and Trinidad and Tobago. Queen conch populations in these countries’ waters are severely depleted, and fishery controls are inadequate to stop overexploitation. 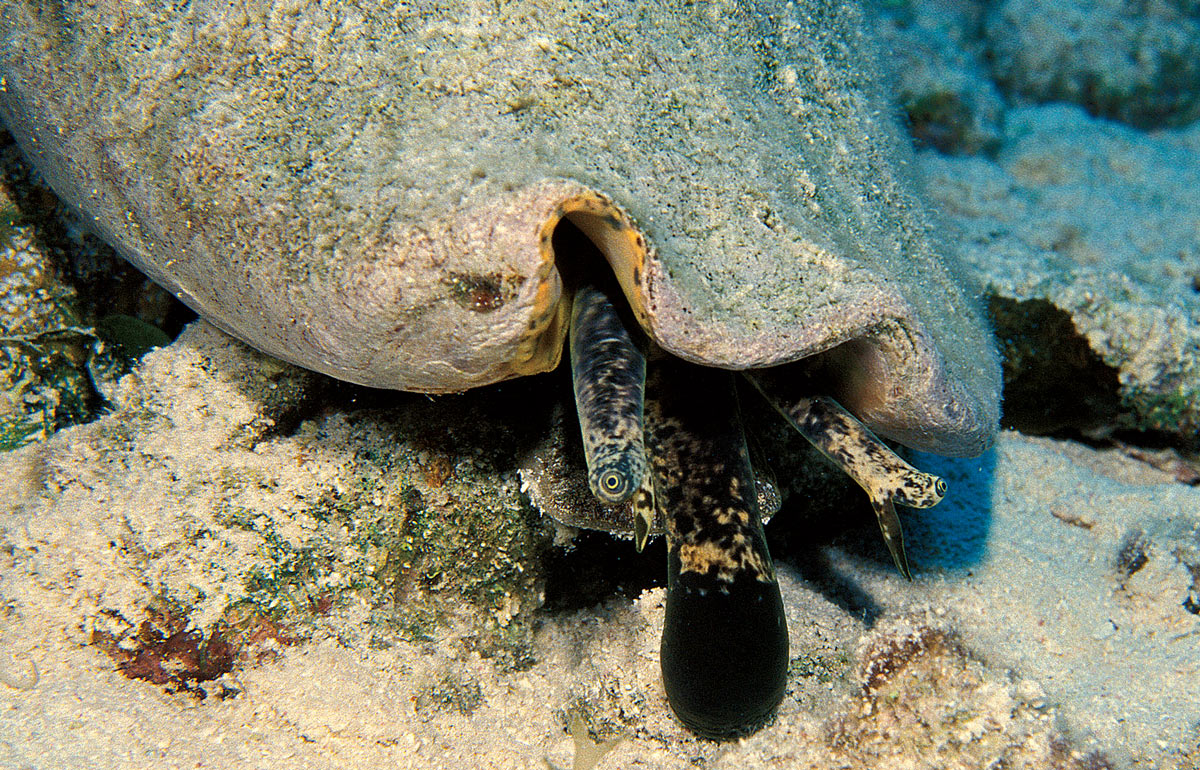 The results of overfishing have been quite dramatic. Conch densities as reported by the Blue Ocean Institute and the Caribbean Fisheries Management Council (CFMC) are well below what is considered necessary for successful reproduction (fewer than 100 per 2.47 acres [1 hectare]) in many areas. In the Dominican Republic densities are very low even within the national parks. In Honduras densities are only reported for the Cayos Cochinos Biological Reserve, a small, privately run reserve offshore. This reserve has densities of about 14.6 per hectare despite restrictions on fishing. Density estimates from Belize are 14-15 per hectare. In Mexico conch density estimates in Cozumel were around 89 per hectare in 1989 before closure of the fishery and 830 per hectare in 1995 after closure. Densities in the U.S. Virgin Islands and Puerto Rico are all fewer than 20 per hectare. In all unprotected areas of the Bahamas, the densities are all fewer than 30 per hectare, while protected areas are higher at 53.6 and 96 per hectare. 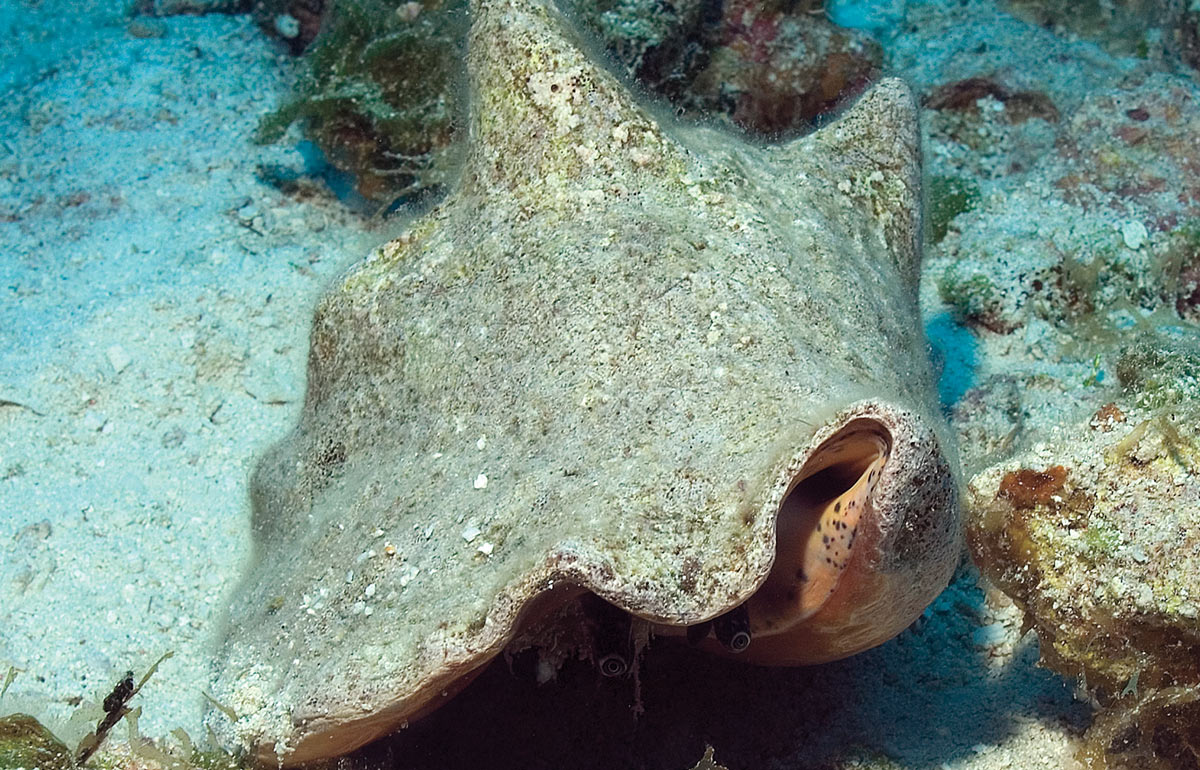 The outside of the queen conch’s shell is marked by spines that project from each whorl of the spiral. Photo by Karen and Ian Stewart.

Although harvesting bans still continue to be the most promising longterm solution, other translocation and husbandry methods have and are being tried with some success. The first attempts at commercial conch culture were carried out at the Caicos Conch Farm, established in 1984 in the Turks and Caicos Islands. The farm is still in operation today and open to the general public. The Caicos Conch Farm has more than 2 million queen conch at various developmental stages in its inventory. If you are on the island of Providenciales make sure you stop by for a visit. As well as pursuing commercial viability of conch production for human consumption, the farm is researching the reseeding and restocking of conch populations throughout the Caribbean. The farm currently provides local restaurants with conch and they also ship many thousands of pounds of meat to restaurants in Florida.

Conch aquaculture research and public education is also under way in the aquaculture division of Harbor Branch Oceanographic Institution, at a university research facility in Merida, Mexico, and at three facilities in the Florida Keys.

In the 1990s, the Florida Straits Conch Company opened a restaurant and educational center in Key West. The Conch Farm Educational and Research Foundation is a museum and laboratory complex that houses exhibits intended to inform visitors of the conch’s history in the Keys. Modeled after the Caicos Conch Farm, the Conch Farm also has the goal of raising queen conchs from eggs and restocking local waters to increase the population.

A stock rehabilitation hatchery operated by the U.S. Fish and Wildlife Conservation Commission began operating in 1991 at the Keys Marine Laboratory on Long Key, Florida. The Long Key rehabilitation hatchery is primarily concerned with determining the most effective strategies for rearing queen conch in captivity and then releasing them to the wild. Through their studies they have determined the optimum release size and the best time to release the conch.

Despite all of these efforts, the future of the queen conch is still in question. Recovery has been slow even in areas such as the Florida Keys, protected since 1975. Despite the bans on imports from some countries the United States continues to be the largest (legal) importer of queen conch. Maybe we can all skip the fritters for a few years in the hope of extending the queen’s reign.