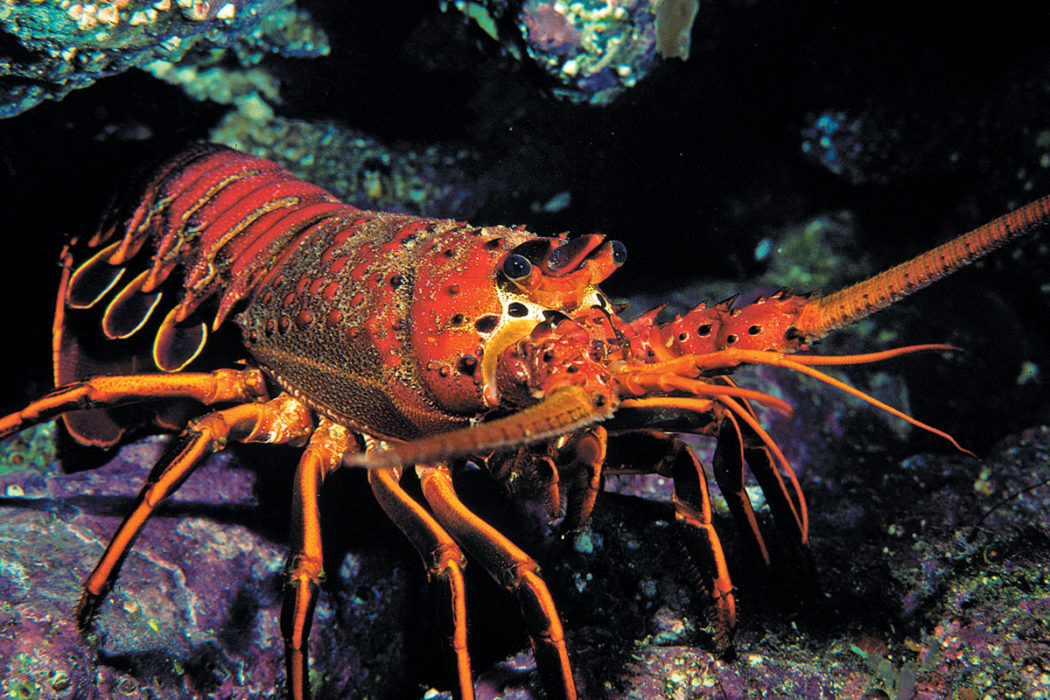 A long-lived species, the California spiny lobster may life as long as 100 years in the wild. At least seven years is required to reach sexual maturity. Photo by Marty Snyderman.

Say the word lobster and you will likely get a variety of reactions ranging from kids who smile from thinking about some of their favorite cartoon characters to adults whose mouths water thinking about a culinary treat. Still others might cringe, thinking of lobsters as strange sea creatures. In many reef communities around the world lobsters are among the more conspicuous invertebrates and, as a result, many experienced divers naturally think back to a favorite diving memory when they saw, photographed, caught or tried to catch a lobster. Commercial fishermen often call some species of lobsters “red money,” a reference to the body color of several commercial species and the fact that a good haul can yield a pot full of cash.

We’ll take a look into the natural history and some of the nuances of the secret lives of a group of creatures whose common names include terms such as spiny, hairy, slipper, elegant, regal, rock, emerald, banded, red-banded, Maine and American.

Described in the phylum Arthropoda, lobsters are members of a class of aquatic arthropods known as crustaceans, a grouping that includes about 35,000 species. In addition to lobsters, the class crustacea includes crabs, shrimps and barnacles as well as a group of other animals, namely stomatopods, amphipods, copepods and isopods, whose generally unfamiliar names end with the syllable “pod.” The word crustacean is derived from the Greek word for “hard shell,” a characteristic of the members of this class. The hard shell offers protection and gives muscles places for attachment, but makes growth a challenge. In fact, crustaceans have to shed their shells, or molt, to increase their size. There are four major families of lobsters described in the order Decopoda, a name from the Greek meaning “ten-legged.” Decapods possess five pairs of legs.

As you might be aware, some of the creatures we commonly refer to as lobsters are armed with claws while other species are not. It is at the family level in the hierarchy of scientific, or taxonomic, classification that taxonomists begin to distinguish between the lobsters that possess claws and those that don’t. The species known as the American lobster (aka Maine lobster) possesses claws and is classified in the family Nephropidae. Those lobsters known as spiny lobsters that are quite common throughout the Caribbean, Florida and the Bahamas as well as different species of spiny lobsters found in California, Europe, Mexico’s Sea of Cortez and throughout the Indo-Pacific do not have claws. These species are described in the family Palinuridae.

Those creatures commonly called squat lobsters also possess claws but they are much smaller and differ significantly from the animals specialists describe as lobsters. 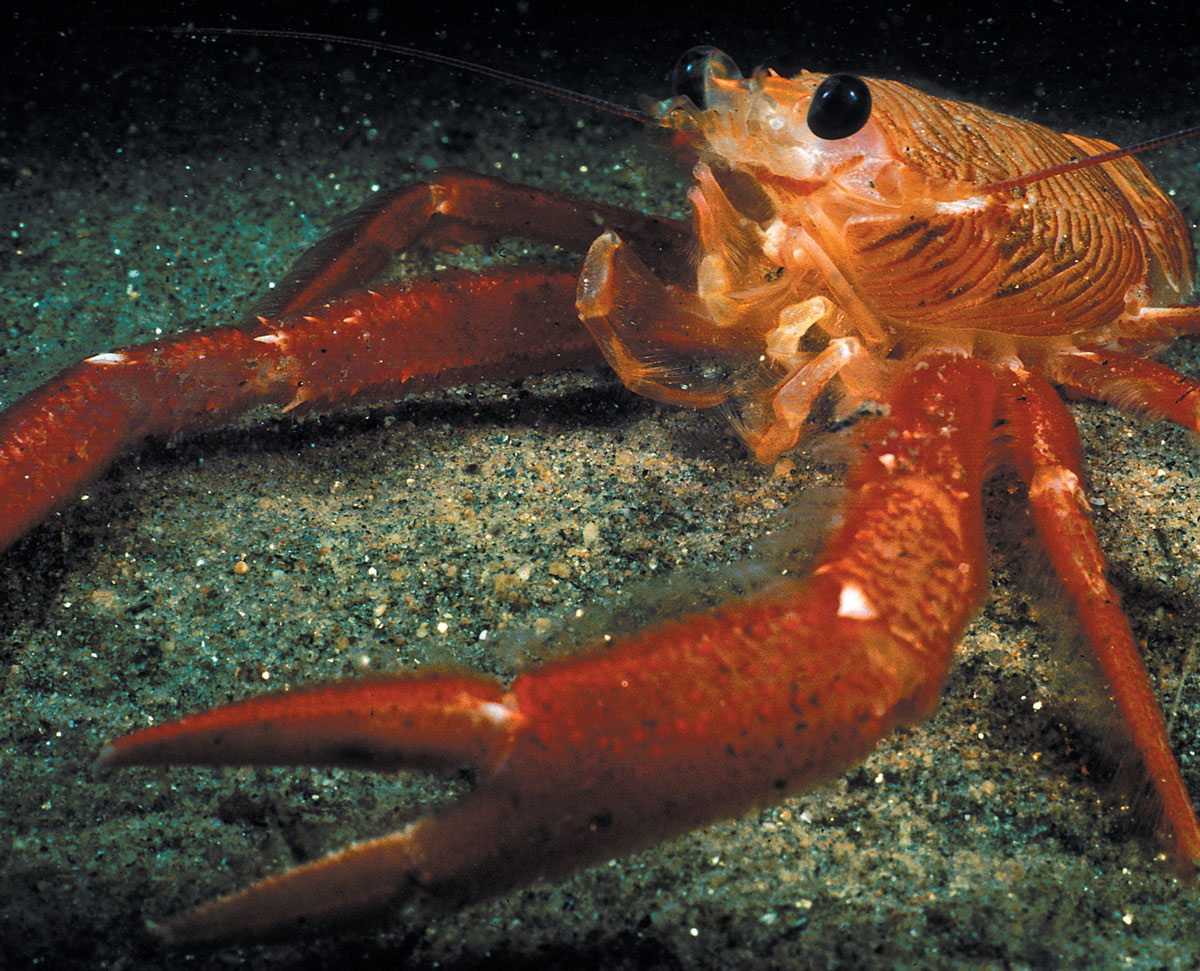 California divers periodically encounter two species of crustaceans that are known as squat lobsters. While these animals look like lobsters, scientists say they are more closely related to their crustacean cousins, the hermit crabs. Pictured is a tuna crab or red crab. Photo by Marty Snyderman.

To sport divers and laymen the often publicized American lobster (Homarus americanus) is probably best known for its delicious flavor and for its paired set of large claws that are used in defense and to grab and crush prey. It is also the largest of all crustaceans, being up to 3.5 feet (1 m) long and weighing as much as 44 pounds (20 kg), although some avid diver or fisherman is certain to claim to have caught a bigger one.

In the American lobster, the forwardmost pair of “legs” has been greatly modified to form the large pair of claws with the larger claw being known as the crusher claw and the other, more pointed claw as the ripper. A highly sought-after species by game-seeking sport divers and by commercial fishermen, the American lobster naturally occurs in reef communities from Newfoundland to North Carolina. The species is sometimes called the Maine lobster, a moniker derived from the high visibility of the lobster industry in that state.

While the body color of spiny lobsters ranges from reddish to blue to bluish-black, American lobsters are typically olive green to greenish brown, but specimens that are orange and even bright blue do occur. Diet, genetic makeup and exposure to sunlight combine to determine their color. However, when you see a cooked America lobster the shell is usually bright red. This is because the major pigment in the shell, astaxanthin, usually appears to be greenish or bluish when bound to proteins in the shell. Heat frees those bonds, and the natural color of unbonded astaxanthin is red.

When moving across the sea floor, all lobsters walk — if not threatened — or crawl as opposed to swim. Lobsters can walk forward, backward and sideways, but when needing to move fast they tuck their tails under their abdomens, rapidly propelling themselves backward. When moving in this manner lobsters can go surprisingly fast, but the effort tires these coldblooded creatures rather quickly.

Like spiny lobsters, the American lobster can detach and discard a leg or claw through a process known as autotonomy. This sacrificial act of self-amputation can help a lobster escape a predator, and it is also sometimes used to help complete the growth process when a lobster is unable to withdraw from the old shell it is trying to vacate. The lost limbs can be regenerated but it takes some time and several growth phases are required before the replaced limbs are full-sized.

The American lobster is mostly carnivorous with a diet that includes a variety of mussels, crabs, sea stars and other members of its own species. Its cannibalistic tendencies have been one of the major hurdles in the to-date uneconomical effort to farm American lobsters.

Spiny lobsters such as the California spiny lobster and the Caribbean spiny lobster lack large pinching claws, and as a result they are sometimes called crayfish. However, these common names can lead to some confusion, as freshwater crayfish do possess claws.

The California spiny lobster (Panulirus interruptus) inhabits the cracks and crevices of rocky reefs from Point Arguello, California, to the northern part of Mexico’s Baja peninsula. During the day they usually hide in cracks or crevices, or “hole up” in diver jargon, with only their antennae exposed. A long-lived species, individuals live as long as 100 years in the wild. At least seven years is required to reach sexual maturity, and they live as long as eight months in their midwater larval stage.

The Caribbean spiny lobster (Panulirus argus) can be found in reef communities from North Carolina to Brazil. In what is believed to be a response to the soon-to-arrive storms of the fall, the Caribbean spiny lobsters that inhabit the Florida Keys and the Bahamas sometimes undergo long migratory marches. When “marching,” the lobsters line up in single file and walk out in the open for as far as 30 miles (48 km). A lot of the “whys” regarding the migration remain unknown, but specialists have determined that as autumn storms approach, the lobsters gather in shallow waters and move to deeper areas. No migration is known to occur when the lobsters return to the shallow areas, and the return tends to occur over a longer period of time. 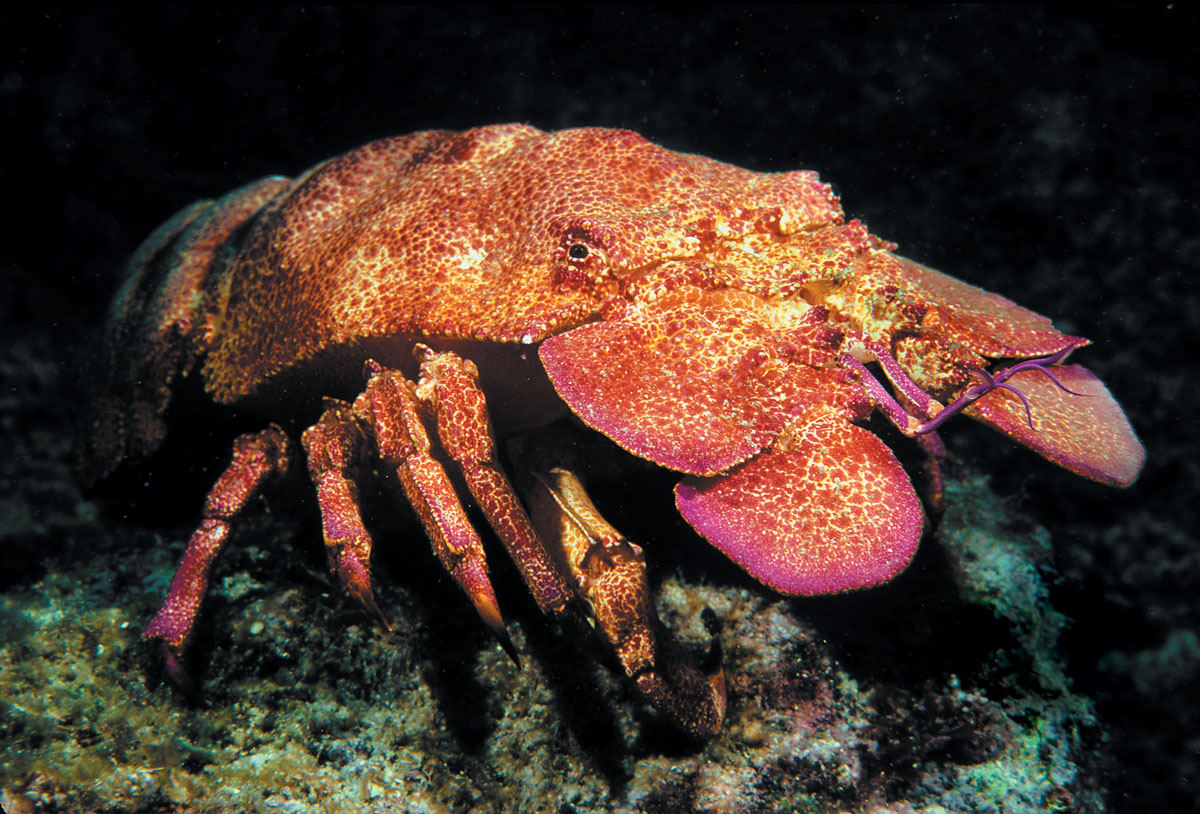 Slipper lobsters do not have the long antennae found in spiny and American lobsters. Instead their antennae have been modified into large flattened plates at the front of the body. Photo by Marty Snyderman.

The bodies of the reclusive slipper lobsters are more heavily armored than spiny lobsters and they are sometimes described as looking like a flattened armadillo. Slipper lobsters do not have the long antennae found in spiny and American lobsters. Instead their antennae have been modified into large flattened plates at the front of the body. Not highly sought-after as food sources by fishermen or divers but a delight for the eyes of divers, especially underwater photographers, a variety of species of slipper lobsters occur in tropical and semitropical seas around the world.

California divers periodically encounter two species of crustaceans that are commonly known as squat lobsters. While these animals bear some resemblance to lobsters, scientists point out that they are actually more closely related to their crustacean cousins, the hermit crabs. One species of squat lobster is also known by the common names tuna crab and red crab.

Growth and the Molting Process

The hard outer shell of a lobster does not grow, thus growth can only be achieved via a process known as molting through which a lobster discards its old shell, expands its size and creates a new shell. During the molting process lobsters are essentially knights without armor, and they are extremely vulnerable to predators until their new shell begins to harden.

Molting is governed by hormones secreted from glands in the eye stalks. Before molting, lobsters feed heavily and store fat. Next the animal produces a soft shell underneath its existing shell and it soon seeks an area where it can hide. Shortly afterward the old shell begins to fracture and the animal climbs out of its old shell. In some instances the lobster will eat its old shell to regain the calcium. While the animals molt, they are extremely vulnerable to predation, but this is also the only time that females can be mated.

During the time the body is soft, important hormonal processes prevent the loss of body fluids and allow body tissues to swell. Given time, another hormonal change allows excess fluids to be expelled and the animal’s body shrinks within the new shell, allowing ample room for growth. Larval lobsters may molt a dozen times or more before settling out of the water column. Once settled onto a reef, a young lobster molts several times annually but this process slows with age. 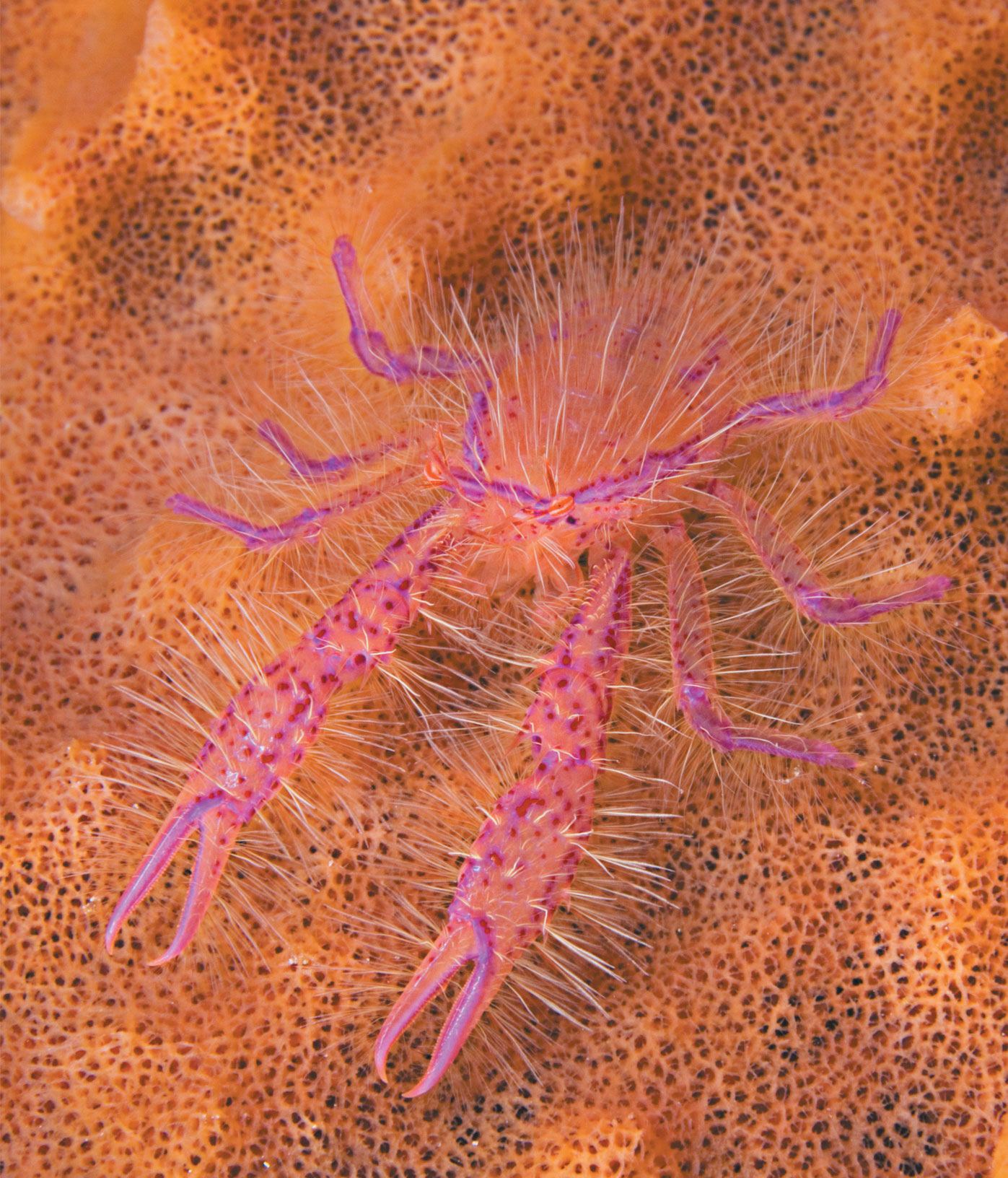 It takes less than 10 seconds for a pair of American lobsters to mate, but it takes a lot longer for them to get into the right mood. The female makes the first move by selecting a male that suits her fancy. Once she identifies him, she hangs around his hiding place in the reef for several days. The male responds by being aloof at times, and at other times he seems to do his best to ward her off by nipping and swiping at her with his claws. But she is a determined seductress, and when the time is right she disrobes by molting and shedding her shell.

To increase her chances of success, shortly after molting the female secretes a powerful pheromone intended to serve as an aphrodisiac. If the combination of her charm, body and “perfume” work their magic, the male will soon begin to caress her body with his antennae. At this point the shell-less female is at risk, as the male’s sharp claws could easily deliver a fatal wound. The male will soon embrace the female and deposit his sperm packet inside her seminal receptacle near her tail where the sperm can be stored for months. After mating, both the male and female often take a few bites from her discarded shell.

When the female finally produces eggs, they are fertilized by the stored sperm and then cemented to her swimmerets where they appear as a gelatinous cluster.