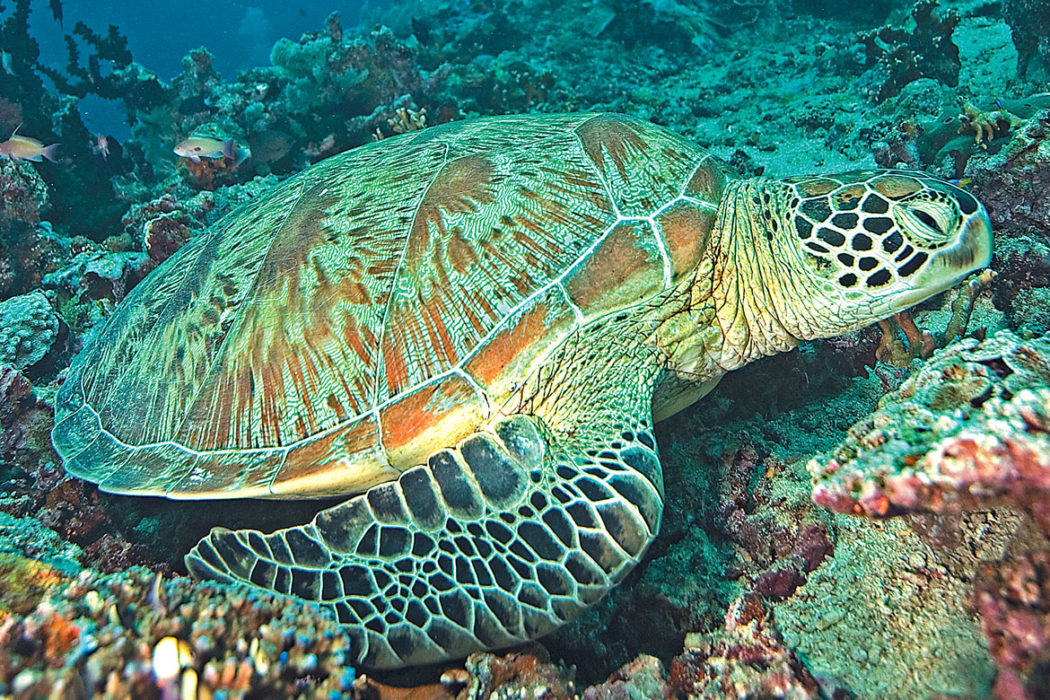 Alternately gliding rather quickly, and then creeping ever so slowly, the octopus made its way across the reef. Hoping to photograph this clever master of camouflage, I was focused on scene in my viewfinder, but I could not help but notice out of the corner of my eye someone following me rather closely. I didn’t look up, as I had my hands full trying to keep track of my photographic quarry. I assumed I was accompanied by another photographer who, like me, was octopus-intrigued. After I composed a couple of nice frames I slowly moved away to allow the other photographer a chance to try his photographic hand, when to my surprise I discovered that the creature following me was not a diver but a green sea turtle.

Often you have to be a little careful and move slowly and deliberately to get close to sea turtles during a dive, but every once in a while a turtle decides to become your new best friend. When that happens, unless you grab or otherwise harass the turtle, the animal will likely remain with you throughout your dive, or at least until it needs air and has to swim to the surface to breathe.

As is the case with all eight (some specialists think nine is the correct number) species of sea turtles, the green sea turtle (Chelonia mydas) is a vertebrate described in the class Reptilia, a word derived from the Latin “to creep.” Other modern day reptiles include snakes, terrestrial lizards, the marine iguana, crocodiles and alligators. As is the case with all reptiles, the green sea turtle is a distant relative of the dinosaurs.

Many millions of years ago reptiles were among the first large animals able to live on land away from water for extended periods. Specialists believe that turtles first appeared on land slightly more than 200 million years ago. Somewhere between 50 million and 100 million years ago, some large marsh-dwelling turtles gradually began to expand their realm as they pushed their way toward the vast waters of the open ocean.

When turtles first made their way seaward some of the adaptations that allowed them to survive on land worked against them in their new lives. A large box-like body created drag, a characteristic that worked against efficient swimming. Over time sea turtles developed smoother, more low-profile bodies better adapted for life at sea. Seagoing turtles required a way of propelling themselves in water and their legs evolved into large, paddle-like flippers. Larger pectoral muscles were needed to propel the flippers in dense seawater. These muscles required considerable space in the chest cavity, and in gaining this space sea turtles lost the ability to retract their head and limbs inside of their shells the way land-dwelling tortoises can.

At one time four families of sea turtles roamed the oceans of Earth, but today only two families remain: the family Dermochelyidae that includes the leatherback turtle, and Cheloniidae, the group to which the green sea turtle and remaining species of sea turtles belong. 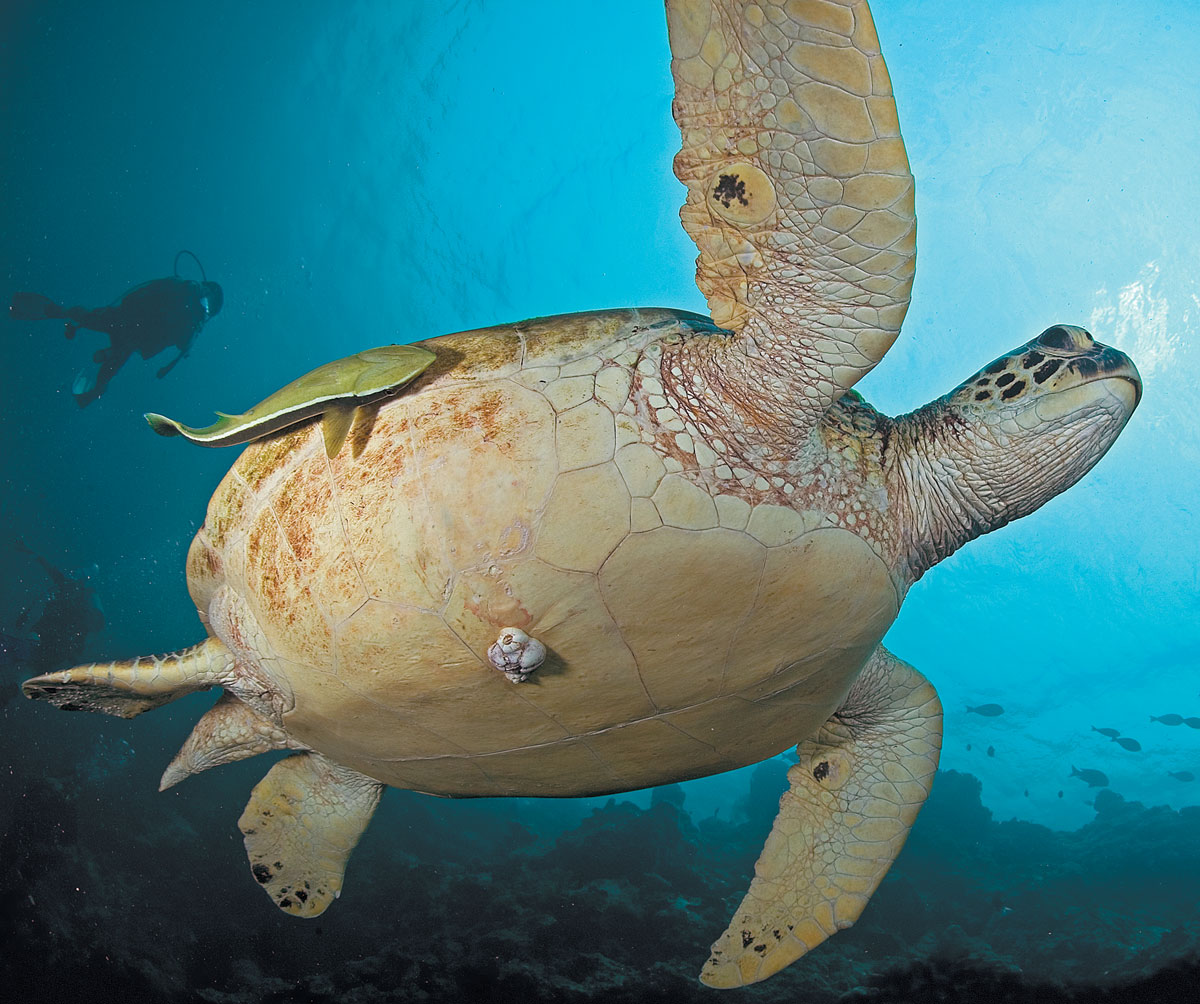 Green turtles are found in tropical and subtropical waters around the world, as they inhabit shallow coastal waters, lagoons, bays and estuaries as well as the waters of the open sea in areas ranging from 30 degrees north to 30 degrees south of the equator. This widespread reptile nests on the beaches of more than 80 countries and feeds in the coastal waters of at least 140 nations. Green sea turtles tend to be solitary animals, however, during certain times of their lives and during certain times of year they can be highly social.

Green sea turtles possess excellent vision underwater, but are thought to be quite nearsighted (cannot see well far away) when looking through air. They lack external ears but do have ear canals covered by a flap of skin, and are quite sensitive to low-frequency sounds. All sea turtles are believed to use their acute sense of smell to help find food. Some specialists also believe that their senses of smell and taste, along with their ability to detect slight variations in the Earth’s magnetic field, are used to help them migrate between nesting and feeding grounds.

Interestingly, some populations of green sea turtles are highly migratory, traveling as far as 1,500 miles (2,400 km) between nesting and feeding grounds, while other populations are well-documented to nest and feed in the same region. Excellent swimmers, the green sea turtle is well-adapted for both long-distance migrations as well as short bursts of speed. Their powerful, thrust-producing fore flippers are long and paddle-like while their rear flippers are used to enhance stability and provide directional control, serving in a rudder-like fashion.

Green sea turtles usually appear somewhat lethargic as they cruise at a rate only slightly faster than most divers can easily swim. However, they are capable of sudden bursts of speed reaching 20 mph (32 kmph).

Superb divers, green sea turtles are often observed rising up from depths far deeper than sport divers can safely explore. As is the case with all coldblooded animals, green sea turtles have comparatively slow metabolic rates. This trait helps them routinely make dives that last 45 minutes or longer, and when resting on the seafloor are known to remain submerged for several hours. This resting period should be distinguished from the long periods of hibernation. When hibernating, green turtles spend several months buried in mud on the seafloor. How they accomplish this feat without breathing continues to fascinate and perplex the scientific community. 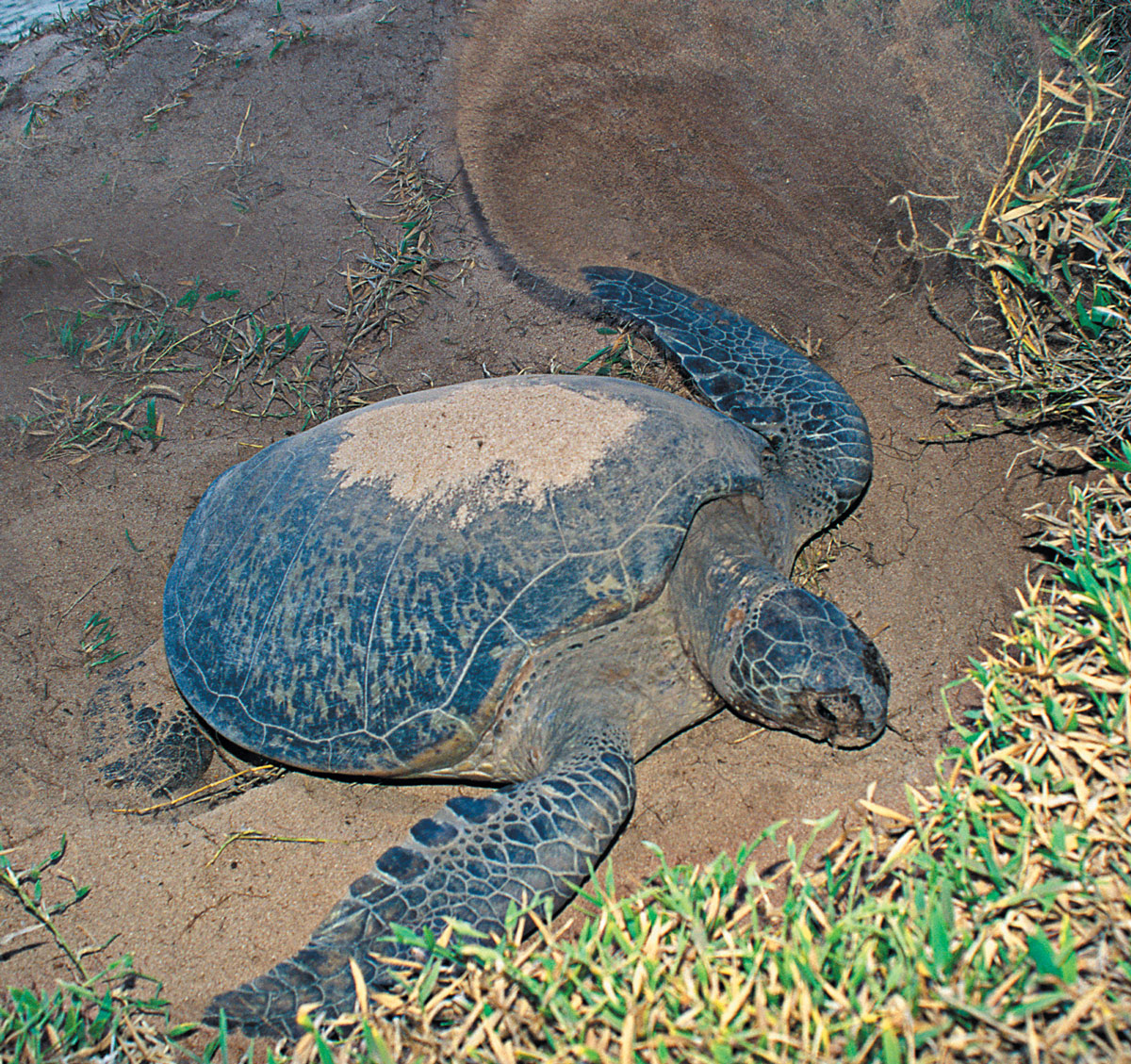 Distinguishing male green sea turtles from females underwater is easy on the rare occasions that you encounter members of the two sexes together. The males are the ones with the longer tails. But when seen alone, sexing the animals can be tricky and generally requires some experience.

As is the case with all sea turtles, reproduction in green sea turtles is a fascinating phenomenon. The age of sexual maturity ranges from 3 to 13 years old, and some studies indicate that sexual maturity is often reached many years later. When mating, two or more males often pursue the favors of a single female. Fertilization is internal and copulation occurs in the water both at the surface and when the animals are submerged. At some point, anywhere from a few days to a few weeks after mating, the females head to shore to dig a nest on a sandy beach and lay their eggs.

Females typically come ashore at night near high tide during the warmer months of the year. The female crawls well beyond the high tide line and digs a hole in the sand known as a “body pit.” This pit is usually slightly larger and deeper than its own body. Toward the back of the body pit the female excavates a small depression called the “egg cavity” where she deposits as many as 150 eggs. The individual eggs can generally be described as round, white and slightly larger than a chicken’s egg. By laying her eggs above the high tide line, she ensures that future tides will not erode her nest and expose the eggs to the forces of nature and predators.

As a rule it takes a female several hours to lay her entire clutch. The eggs are soft-shelled and do not break as they are dropped into the egg cavity. After depositing the last of her eggs, the female covers her nest, using her flippers to fill the nest with sand before she returns to sea. Females lay as many as nine clutches in a single mating season and mate every two to five years.

Interestingly, the sex of the offspring in all sea turtles is not determined when an egg is fertilized. Instead, the sex is determined by the temperature of the sand that surrounds the egg during incubation. As a rule, the deeper any egg rests in the nest, the cooler the surrounding sand. These eggs yield females, while eggs that are shallower in the nest produce males.

The incubation period varies from 50 to 70 days. The eggs usually hatch at night and the newborns quickly scramble seaward. On the whole life is quite unkind to the hatchlings, and many specialists believe that fewer than 10 percent survive the first year of their lives. Those that survive the gauntlet of crabs, birds and other animals and make it from their nest to the sea are readily preyed upon by sharks, other fishes, more crabs and more birds. However, there is good news for those turtles that survive the onslaught of their early years. Some wild green sea turtles live more than 30 years.

During the early years of studying green sea turtles, one of the great mysteries centered on where young sea turtles spend their time, as they were rarely encountered by researchers. It is now known that young green sea turtles commonly spend many years adrift in the open sea where they hide and feed in large gatherings of seaweed and other floating debris.

Roderic Mast of Conservation International says, “A turtle is much more than just what is inside its shell. It is only really a turtle when accompanied by its environment.” This thoughtful comment succinctly expresses the importance of green sea turtles and the role they play in the cycle of life on Earth.

Cleaning behaviors occur with sea turtles in oceans around the world. In most instances herbivorous fishes such as surgeonfishes and tangs feed on seaweeds and algae that grow on the turtles’ shells. The compilation of seaweed and algae creates drag, making turtles less efficient swimmers. Having those growths cropped greatly helps both the turtles and the fishes that gain access to food.

Numerous dive sites in the Hawaiian Islands are well-known to have green sea turtle cleaning stations. On a near daily basis divers can observe surgeonfishes, yellow, brown and convict tangs provide their cleaning services en masse. If divers approach slowly and deliberately they can get quite close to a turtle while it’s getting a “spa treatment.”

In eastern Pacific waters, along coasts ranging from the southern United States to the northern shores of South America, exist populations of turtles that some scientists consider to be green sea turtles. Others consider them a separate species (Chelonia agassizi) known as black turtles. These animals tend to be slightly smaller than the individuals found in other populations of green turtles.