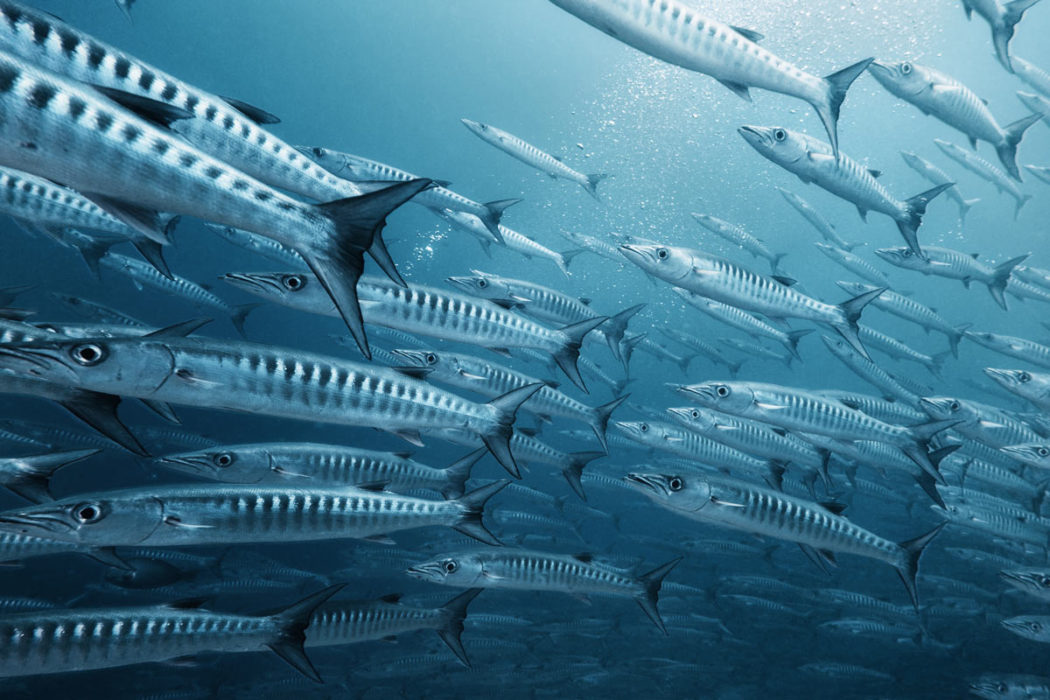 It was just after midnight on a moonless night when we slipped into the watery blackness in hopes of filming a great barracuda, the species we were focusing on for a film I was shooting for the Discovery Channel. We were working in the Florida Keys, and the surrounding waters are definitely known as “cuda country.” Few sites in the Keys provide a better chance for an encounter than the wreck of the City of Washington out of Key Largo where we were diving. It is known to be an excellent site to find great barracuda, a species known to icthyologists as Sphyraena barracuda.

Within only a few minutes we spotted our first barracuda. Its normally solid silver body was almost solid black as it slept on the wreck. We were happy to find and film this fish but I knew that a scene of a sleeping fish doesn’t merit a lot of screen time without putting the viewing audience to sleep or causing them to change the channel. But that night, luck was on our side.

Within minutes our lights attracted a swirling school of baitfish commonly called silversides. Dancing in our lights, the silversides formed tight circles that expanded and contracted rhythmically. As we looked on, the school began to move erratically and then frantically. Almost instantly I realized that some potential threat to the silversides must be lurking nearby. Seconds later, our lights revealed a 5-foot- (1.6-m-) long barracuda on the edge of our light beam. The “game” of life and death was on.

The barracuda rushed the school and the silversides scattered only to gather again as the predator paused before making another lightning-fast charge. Over the course of the next 10 minutes the barracuda rushed in and the school scattered time and time again. Sometimes when the barracuda attacked I could hear a crunching sound made as the cuda sunk its teeth into a hapless victim. During the first few passes I didn’t see a direct hit but I definitely heard the crunching sounds when the barracuda snagged its prey, and moments later I saw dozens of silver scales sinking toward the sea floor. There was no doubt that the barracuda had hit its mark.

I couldn’t help but wonder how the barracuda I was filming would be perceived by our audiences. Would its hunting behavior be viewed as action taken by a vicious predator that will bite anything that gets close enough to strike, thus adding to the tall tales of sea lore? Or would this animal be seen as another fish that is using the assets provided by Mother Nature to survive in a world filled with obstacles?

These questions careened about in my head as I rolled film, but suddenly the whole thing ended. The great barracuda disappeared, the school slowed down and the hunt was over. I can only assume that the hunt ended with a satisfied, full-bellied barracuda.

So who are the fishes known as barracudas and what is it like to be with them on a dive? It is a perfectly natural question to ask. A look into the natural history of barracudas will provide you with plenty of insight, and fortunately, this insight should eliminate unnecessary concerns. 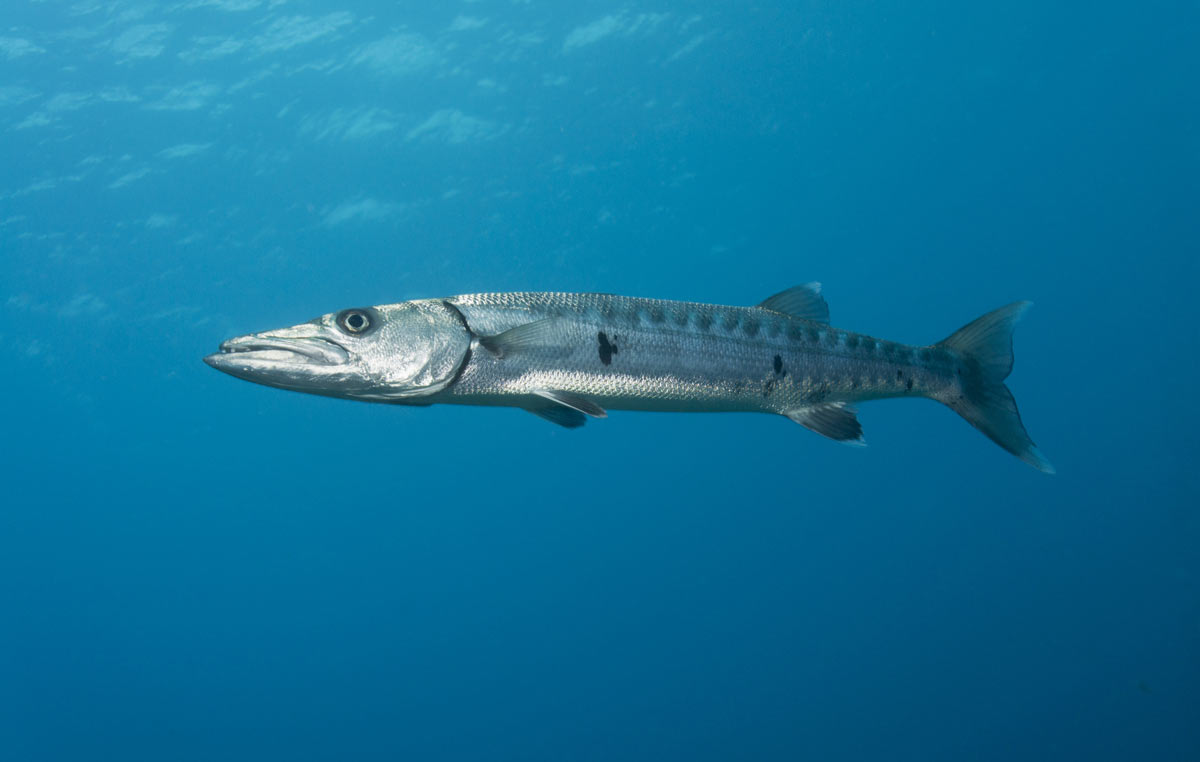 Worldwide, there are about 20 species of fishes known as barracudas and sennets. All are members of the family Sphyraenidae. As a group, barracudas and sennets are among the fastest-swimming fishes in the sea. They possess a classic fusiform shape, meaning they are slender and elongated, or torpedolike. This shape is common to many of the ocean’s swiftest swimmers. In fact, the great barracuda, the most highly publicized member of the family and a species that is commonly seen throughout the Caribbean, Florida, the Gulf of Mexico and the Bahamas, has been clocked at an amazing 22 mph (35.5 kmph). Some specialists think that speed is just a warm-up and that great barracuda can reach a speed of 30 mph (48.4 kmph) in only a couple of seconds from a dead stop.

It is not just their shape that allows barracudas to attain such amazing speeds. Their bodies are coated in a layer of slime, a characteristic that greatly reduces drag. In addition, all members of the family have large, powerful tails and tail fins. In fact, the great barracuda can propel itself as far as 50 yards (46 m) in a single side-to-side beat of its tail. The combination of speed, stealth and a mouthful of razor-sharp teeth enable barracudas and sennets to capture the smaller fishes they prey upon.

Great barracuda commonly reach a length of 5 feet (1.2 m), and larger specimens weigh close to 50 pounds (22.5 kg). The head has a jutting lower jaw with regularly spaced, fanglike teeth, and the body sports a pair of dorsal fins that are widely separated. As adults, great barracuda tend to be solitary, but certainly it is not unheard of for these fish to gather in small schools, especially as juveniles. In places where tarpon (Megalops atlanticus) are found it is not uncommon for new divers to get the species confused, but that problem is easily solved by just a bit of experience.

When swimming through shallow water on sunny days, the highly reflective, silver bodies of great barracuda and other members of their family shimmer as rays of sunlight dance across their backs. Most great barracuda have a number of dark spots on the lower half of their bodies and some display a gray to greenish hue on the top of their back.

On some occasions you might see great barracuda hovering almost motionless next to a sea fan, sponge or coral head as they wait to ambush prey. At those times you might note that when they are hiding near the sea floor their coloration and patterning are often completely different from when the fish cruise in midwater. The same is true when they rest on, or near the sea floor. When on the bottom, it is quite common for the silver coloration of their normal appearance to be broken up by dark banding patterns that help great barracuda blend with their surroundings.

While the great barracuda does occur in many diving hotspots throughout the South Pacific, other species of barracudas such as the 3- to 5-foot- (1- to 1.6-m-) long blackfin barracuda (Elegatis bipinnulata) commonly command the attention of divers. Blackfins routinely gather in schools that consist of several thousand fish. The schools often form stunning geometric patterns that flow from one general shape to the next.

While we tend to think of barracudas as predators, their schooling behavior is used for anti-predatory purposes. With the constant movement and the presence of so many fish in a single school, it can be extremely difficult for a predator such as a shark to single out one fish as its target.

Several species of barracudas are sought by sport fishermen. Certainly this is the case with the Pacific barracuda, Sphyraena argentea, that ranges from Baja, Mexico, to Alaska. While some tropical species, most notably the great barracuda, are known to carry ciguatera, a form of fish poisoning that can cause serious consequences, Pacific barracuda do not. This species is often encountered by divers in the waters of Southern California, and is known as the California barracuda.

Although they are much smaller than great barracuda and several other members of their family, Pacific barracuda provide a thrill for divers who look up and see a school of several hundred of these silvery fish cruising through a kelp forest. Pacific barracuda are normally rather shy, but there are times when divers can get into the middle of a school and watch as hundreds of these 3- to 4-foot (1- to 1.25-m-) long fish swim within only a few feet.

The species known as the southern sennet, Sphyraena picudilla, is commonly encountered in some parts of the Caribbean. From afar, schools of southern sennet look like a group of baby great barracuda. When near the surface, individual fish often seem to disappear in the lightly hued patterns of surface waters. The tightly packed schools often number in the hundreds and occasionally into the thousands. Although the schools are sometimes easy to approach, more often than not the groups are somewhat skittish and difficult to approach.

At night, many species of barracudas are commonly encountered during various stages of sleep. Sometimes the slightest movement, noise or even the beam from a dive light can cause a startled fish to bolt away. However, there are also times when barracudas are really “zonked out.” During those periods you can often swim to within inches and take a good, long look without disturbing them. That said, I always think it wise to stay slightly to the side of the fish instead of getting right in front of it so you can avoid being rammed by a startled fish that swims away full-speed ahead. 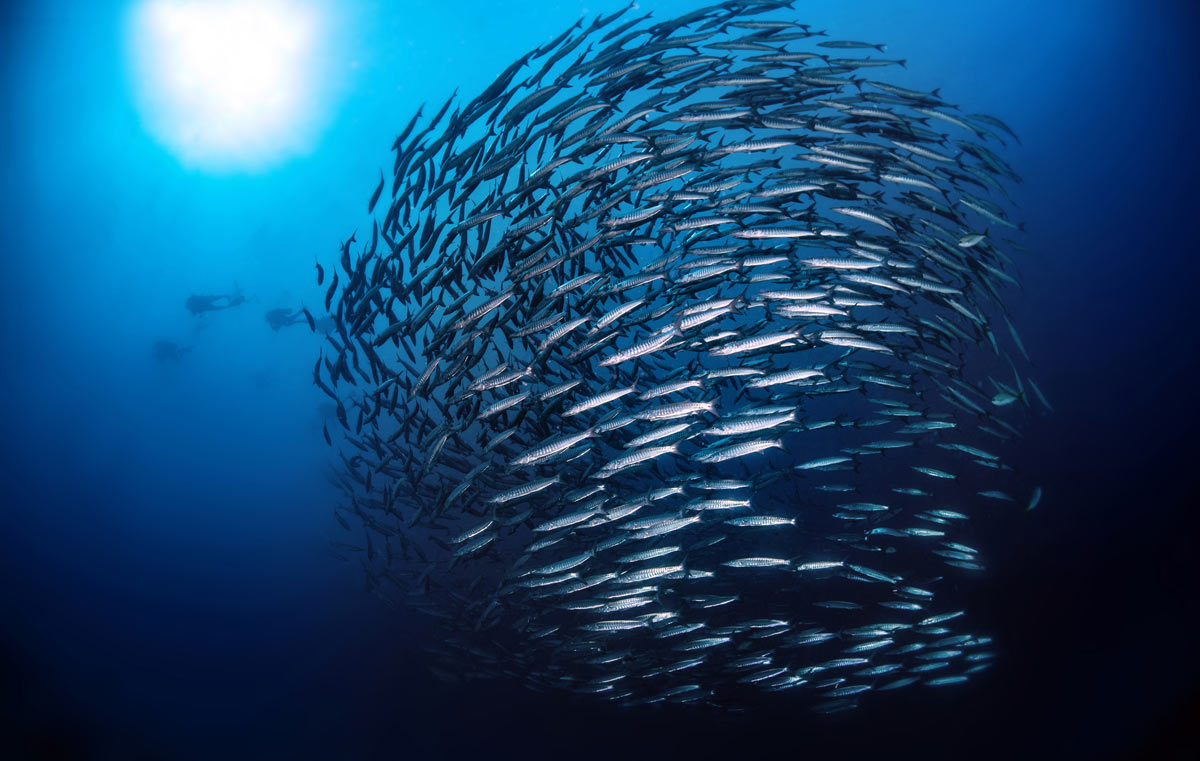 My what Lovely Sharp Teeth You Have

Given the size and appearance of great barracuda, it is no wonder that new divers are often somewhat unnerved by the presence of these creatures. It is true that great barracuda commonly display a strong sense of curiosity about divers and snorkelers, and will frequently shadow divers closely while exposing a mouthful of long, sharp, caninelike teeth. If you employ a bit of common sense and avoid hand-feeding, petting or grabbing a barracuda, it is very likely to leave you alone.