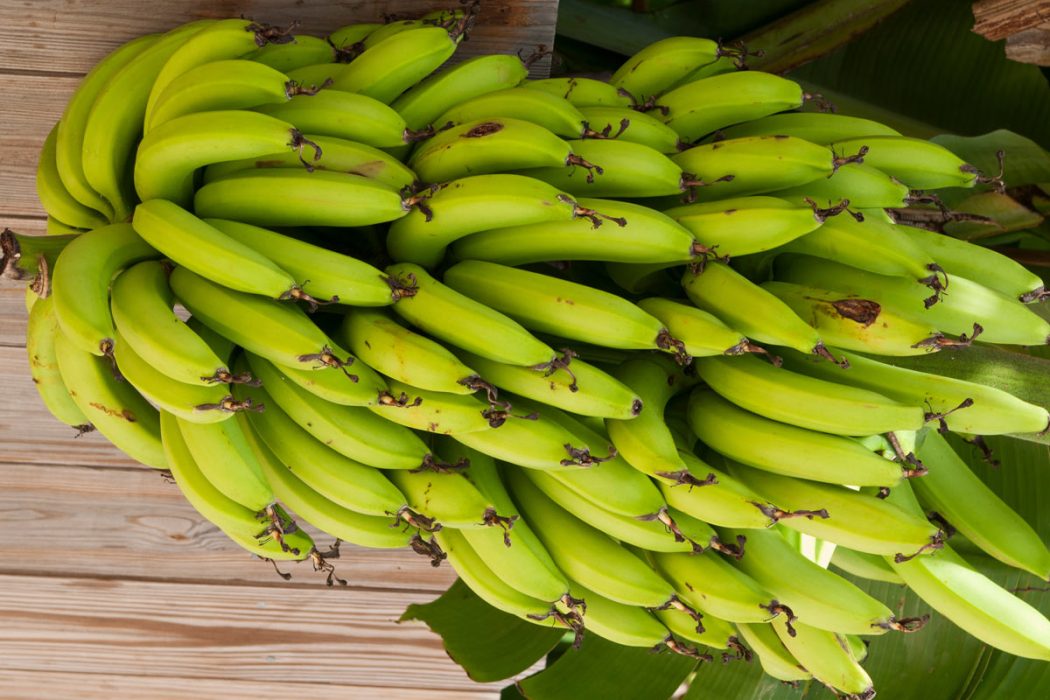 In a dripping green jungle somewhere in the tropics, a banana plant shoots up from the moist ground. Laden with fruit, the tall shady stalk bends under the weight of its bounty. Soon, sweet slices of creamy banana adorn breakfast entrees and dessert creations in many parts of the world. But bananas are more than just tropical treats. For millions of people, they are an important source of food and income.

Bananas trace their roots back to the jungles of Malaysia, Indonesia, the Philippines, and northern Australia. They have been in cultivation since the time of recorded history and are mentioned in ancient Hindu, Chinese, Greek, and Roman texts. The first Europeans to refer to bananas were the armies of Alexander the Great during their conquest of India in 327 B.C.

Early migrants from Southeast Asia carried the roots of banana plants with them to the Middle East and Africa. From there, Portuguese traders carried the plants to the Canary Islands off the northwest coast of Africa, where bananas are grown commercially today. According to Spanish history, Friar Tomas de Berlanga sailed to the Caribbean in 1516 and introduced bananas to the New World. It wasn’t until the 1876 Philadelphia Centennial Exhibition that the American public received its first taste — each sweet treat was wrapped in foil and sold for a dime.

Today, bananas are grown in every humid tropical region of the world in a band straddling the equator about 30 degrees north and 30 degrees south. Ideal growing conditions include average temperatures of 80 degrees Fahrenheit (27 degrees Celsius), annual rainfall of 79-98 inches (201-249 cm), and moist soil with good drainage.

Bananas are just one of many tropical fruits we see being cultivated when we visit some of our favorite tropical dive destinations. To people living in tropical areas, however, bananas are a critical staple food. In the African country of Uganda, annual consumption is 535 pounds (241 kg) per person, and the local word for banana, “matooke,” means “food.” Bananas comprise between 12 percent and 27 percent of the daily calorie intake of the populations of Uganda, Rwanda, Gabon and Cameroon. In addition to relying on bananas for subsistence, people in the tropics grow and sell them in local markets, one of the few income-producing activities available throughout the year.

Worldwide, 109 million tons (99 million metric tons) of bananas were grown in 2001. Most are not produced for export, but remain in the countries that grow them, further testament to their importance to many people in places like Brazil, India and equatorial Africa.

Only a few types of bananas are cultivated for sale to the world market even though more than 300 varieties exist. The Cavendish is the most common type found in grocery stores in the United States. Of all the bananas grown in the world, only 12 percent, or 13 million tons (12 million metric tons), are produced for commercial export. The international banana trade is a $5 billion-a-year industry, and contributes to the economies of low-income countries such as Ecuador, Guatemala and the Philippines. In the Caribbean, bananas are one of the most important agricultural exports of the Windward Islands, Jamaica, Belize and the Dominican Republic. The largest exporter of bananas is Ecuador, followed by Costa Rica and Colombia. The top importers are the United States and the European Union, with the average American eating 28 pounds (13 kg) of the fruit each year.

Bananas don’t grow on trees. Scientifically classified in the genus Musa, bananas are fast-growing giant herbs from the same family as lilies and orchids. They are the largest plants on Earth without a woody stem like that of a tree trunk. A cultivated banana plant does not grow from a seed, but rather from a bulb-like structure called a corm. The “trunk” of the plant, called the “pseudostem,” rises from the corm and is made of sheaths of overlapping leaves tightly wrapped around each other like celery stalks. Emerging from the center of the pseudostem, 4-15 frond-like leaves unfurl at a rate of one per week in optimal conditions as the plant grows. The leaves extend upward and outward, forming broad glossy blades up to 9 feet (2.7 m) long and 2 feet (0.6 m) wide.

Once the plant has produced a certain number of leaves, the flowering stem, called the “inflorescence,” also grows up through the pseudostem. At first, it is a large tapered purplish bud. As the bud opens, groups of tubular white flowers are revealed. Both male and female flowers are present, and the fruit (technically a berry) develop from the females without pollination. As the young bananas grow, they resemble slender green “fingers.” A cluster of mature fruit becomes a “hand,” and under the weight of the bananas the stem bends down toward the ground. As bananas ripen, they turn from green to yellow or red depending on the variety. A single banana plant can produce 100-300 individual fruits, and can reach a height of more than 30 feet (9 m).

The time for a plant to grow and bear fruit varies, depending on climate and variety, but generally can take anywhere from 10 to 15 months. During that time, the plants are susceptible to drought and wind damage because the pseudostem is 93 percent water. Severe windstorms can knock down acres of plants, and many growers will prop their crops with sturdy poles or overhead cables. Growers may also cover the fruit with a transparent plastic bag, which provides protection from insects, birds, and leaf damage, yet allows sunlight to penetrate. Once a banana plant bears fruit, it dies, and new shoots grow from the corm. Thus, bananas can be grown and harvested year-round.

To Cook or Not to Cook

Bananas can be eaten uncooked or cooked. As sweet “dessert” bananas develop, such as the Cavendish variety eaten by most Americans, some of the starch in the pulp is converted to sugars. These bananas are allowed to ripen and can be consumed uncooked. Cooking bananas, such as plantains, do not undergo the starch-to-sugar transformation until they are ripe to the point of rotting and must be cooked prior to eating, similar to potatoes. More than half of all bananas grown in the world are baked, roasted, boiled or fried. They can also be dried and eaten as chips, or ground into flour. Some tribes in East Africa produce beer from fermented bananas. In addition to the fruit, new shoots from the plant’s corm can be cooked as greens, and much of the plant can be used as livestock feed.

Rich in carbohydrates, potassium, and vitamin C, bananas are an important source of nutrition for the world’s tropical areas. High in energy and low in fat, the fruit is easily digestible and fed to infants, the infirm, and those with digestive problems.

People in the tropics who rely on bananas as a major food source have devised additional uses for this versatile plant. Certain varieties are cultivated for their fibers, which are fashioned into rope, paper, fishing line, tea bags, shoe soles and floor coverings. The broad leaves are used to wrap food for steaming, baking or storing, and can serve as dinner plates. Leaves also make good umbrellas, and can be woven into placemats, handbags and hats. The pseudostems make comfy seat pads for benches, and are also used to cushion banana bunches during transport. The dried peel of the banana is used to blacken leather and when burned is rich in potash, an ingredient for making soap.

All parts of the plant are used for medicinal purposes. The peel and pulp of ripe bananas contain antifungal and antibiotic substances. The flowers are used to treat bronchitis, ulcers and diabetes. Sap from the plant is applied on stings, bites and hemorrhoids, and is used to treat fevers, hemorrhages and acute diarrhea. Also, young leaves are mashed into a wet paste and placed on burns and other skin irritations.

Because the banana plant is an integral part of the lives of millions of people, it is symbolic as well as functional. Hindus view the plant as a sign of fertility and prosperity because of its continuous reproduction, and place leaves and fruit at the doorsteps of recently wed couples. Malay women bathe with banana leaves for two weeks following childbirth. In the Pacific islands of Hawaii, warriors used to wave a young banana plant as a truce flag.

A treat for some, a way of life for others, every bite of banana evokes a taste of the tropics.

Arabian slave traders get the credit for giving the banana its name. At the time of the slave trade, bananas growing in Africa and Southeast Asia were a small variety, about as long as a man’s finger. “Banan” is the Arabic word for finger.

The phrase “going bananas” was first recorded in the Oxford English Dictionary, and is linked to the fruit’s comic connections with monkeys.

“Banana Republic” is a term for a small, often Latin American or Caribbean country, politically unstable, dependent on limited agriculture, and governed by a small group of wealthy and corrupt rulers.

Story and photos by Amy Gulick