Until the ’50s, the island of Grand Bahama was sparsely populated, consisting of small fishing villages and little industry. My, how times have changed.

These days, Grand Bahama Island is one of the most inviting islands in the Caribbean. But its development as a tourist attraction didn’t happen by accident. In fact, it’s the only island in the Bahamas developed from a master plan set in motion in the 1950s to create a tropical paradise for vacationers from around the world.

As a result, Grand Bahama has modern amenities, as well as activities that run the gamut, from gaming and golfing to exciting watersports. Ecological adventures are plentiful, too, and dolphin encounters, inviting coral reefs, secluded sandy beaches and the underwater cave systems are some of the most fascinating natural wonders a diver can experience.

“Grand Bahama” is derived from a name originally given to the island by none other than Christopher Columbus. When he landed on its shores in 1492, he called the island “Gran Bajamar,” or “Great Shallows,” because of the shallow reefs surrounding the island. He found the island inhabited by a group of Indians known locally as the Lucayans. These native Indians arrived somewhere between 5,000 and 7,000 years ago, following in the footsteps of the first-known settlers, the Siboneys, who migrated to the Caribbean from South America’s Amazon basin.

Soon enough, the Spanish enslaved the Lucayans and transported them to work in Cuba’s gold and silver mines or Trinidad’s pearl fisheries. When the Spanish left Grand Bahama, the island was virtually deserted. Ships sailed right past the island, believing it was too treacherous to risk the reefs encircling it.

In 1670, Great Britain claimed the Islands of The Bahamas, and, eventually, many British colonists migrated to the islands seeking religious freedom. Unfortunately, the colonists were followed by pirates and privateers. The reefs that kept the Spanish away made Grand Bahama an excellent location for pirates launching attacks on passing vessels. These marauders were skilled at “wrecking” – that is, running ships aground in the shallows and leaving the vessel helpless. It wasn’t until the 1720s that the British were able to squelch the pirate raids, bringing a close to the Golden Age of Piracy.

During the time that followed, Grand Bahama reverted back to a quiet colony. It remained that way for 200 years, until the Civil War erupted in the United States.

The Bahamians living on the West End, a convenient 52 miles (83 km) from Palm Beach, Florida, took advantage of the Union blockade of the Southern states and began smuggling much-needed goods, such as cotton and weapons, to the Confederacy. Once the Civil War ended, the island’s economy went from boom to bust.

Another boom arrived when the United States approved the prohibition of alcohol in 1919. Smuggling flourished, and distilleries and warehouses sprang up across the island. When Prohibition was abolished, the economy once again deflated, leaving the island languishing.

That is, until a visionary came forth to change the direction of Grand Bahama forever. That person, American businessman Wallace Groves, envisioned the island as a thriving port for tax-free goods – particularly timber – to be shipped to the United States, and he believed that the beautiful tropical island could be transformed into an alluring tourist destination. Groves was so determined to build his dream that, in 1955, he approached the Bahamian government with the idea of developing a town that would cater to industry as well as tourism. The result was the Hawksbill Creek Agreement, which paved the way for the city of Freeport, now the second-largest city in the Bahamas and the commercial center for the island.

By 1962, Groves had procured the services of Canadian developer Louis Chester to build a tourist center in the town of Lucaya, located only 4 miles (6 km) from Freeport. Today, Lucaya is the heart of the tourism industry, with shopping complexes, megaresort hotels and a harbor boardwalk lined with shops and restaurants. 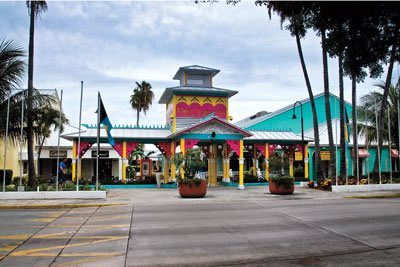 City life, and therefore nightlife, in Grand Bahama is mainly focused on these two locations. Many visitors have passed through the red, lacquered Torii Arch, Japan’s traditional symbol of freedom, into the International Bazaar, one of the most popular places in Freeport for shopping and dining. One “must-do” stop at the center is a visit to Fragrance of the Bahamas – The Perfume Factory, where, for a small fee, visitors can choose from 35 different scents, such as floral and oriental, and blend them to create their own fragrance. Guests can name their perfume blend, and they leave the Perfume Factory with a truly unique shopping experience.

Likewise, the 12,000-acre (4,800-hectare) Port Lucaya waterfront is teeming with vacationers. The Port Lucaya Marketplace is also filled with boutiques, artisans and vendors; it’s Straw Market has grown into one of the largest in the Caribbean, filled with authentic colorful straw wares, many of which are duty- and tax-free. Dining options are plentiful, too. Visitors can experience casual or fine dining, including authentic foods of the Bahamians, such as conch salad and curried mutton, or one of the traditional favorites on the island, the spiny lobster, or “crawfish.” Following a delicious dinner, take in a concert at Count Basie Square; bands perform five nights a week, and on special nights local shows, including limbo and fire dancing, are performed.

Elsewhere, each Wednesday, Smith’s Point hosts a fish fry, and on Friday nights a crab fest is held near the International Bazaar. Of course, one of the most relaxing ways to end an exciting day of activities is to enjoy a leisurely dinner cruise while watching the setting sun disappear below the horizon.

The island hosts several events throughout the year, including the annual Grand Bahama Sailing Regatta in June and the Pirates of Grand Bahama Dive Week in October, which is sponsored by the Ministry of Tourism and the Grand Bahama Dive Association. The Dive Week includes day and night diving with evening activities or entertainment. And Junkanoo, one of the most authentic events, is held in downtown Freeport; activities begin at 5 p.m. December 31 and continue into the early hours of January 1. Locals dressed in costumes parade through the street to the sounds of drums, horns and cowbells as they welcome in the New Year.

For the eco-minded, Grand Bahama offers three national parks for excellent adventures. The 100-acre (40-hectare) Bahamas National Trust Rand Nature Centre, only minutes from Freeport, is the largest park on the island. Park visitors are able to enjoy half-mile (1 km) self-guided tours over botanical trails, surrounded by 130 types of native plants, including examples of the more than 50 species of exquisite wild orchids.

The center is also enticing for bird-watchers. Grand Bahama is home to 18 of the 28 species of birds common to the Bahamas, making it the second-highest number of native species of any Bahamian island. With a good pair of binoculars, visitors may catch a glimpse of the Cuban emerald hummingbirds, red-tailed hawks, red-legged thrushes or endemic Abaco parrots. 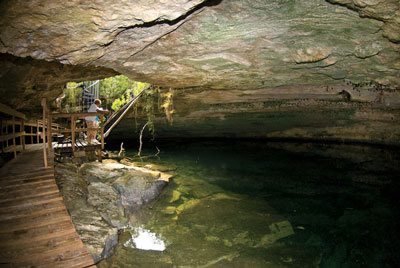 The 40-acre (16-hectare) Lucaya National Park is the second-largest park on the island. This seaside preserve is the only place where visitors can see all six of the island’s ecosystems at once, as nature trails weave their way through pine forests, mangrove swamps and small ponds. The park is also home to a seven-mile-long (11 km) underwater limestone cave system, which is believed to be one of the world’s largest surveyed cave systems. Ben’s Cave, named after the first explorer, Ben Rose, has two points of entry; note, though, that one entry is closed during the summer months to conserve a bat nursery.

Fifteen miles (24 km) from Freeport, Peterson Cay is the island’s smallest national park, but it is well worth a visit. The best way is to charter a kayak snorkel tour. It takes about 30 minutes to paddle the half-mile from the mainland to the beach, but once on the island, visitors are rewarded with snorkeling and diving among unspoiled coral reefs.

In addition to the national parks, the island has more than 60 miles (96 km) of pristine beaches, both active and secluded, that stretch from Freeport and Lucaya to the eastern end of the island. One of the most accessible is Lucayan Beach, easily reached from the town’s main street across from the Port Lucayan hotels. For visitors who enjoy lively entertainment, this is the place to go. There are plenty of activities available, including parasailing, banana boat rides and snorkeling, and a break from the activities usually calls for a visit to a local bar, where they serve the island’s favorite snack, roast conch. On the other hand, Taino Beach is your choice if you’re attuned to family-type activities.

Grand Bahama offers a variety of adventures for vacationing divers, including reef, wreck and cave diving, and it’s even possible to enjoy the thrill of dolphin encounters and the adrenaline rush of shark feeding dives. The reefs of Grand Bahama are dense and riddled with blue holes and underwater caves, largely due to the island’s limestone base. The reefs tend to be low-profile tongue-and-groove formations, and healthy corals and sponges cover the reefs, creating a colorful habitat for many varieties of fish and invertebrates.

Numerous wrecks surround the island, providing interesting and challenging subjects for photographers. As sunken ships age, the flora attaches and grows to cover the wreckage, creating an appealing home for many varieties of fish and a beautiful backdrop for photographs. Two of the more popular are the Sea Star and Jose’s Wreck, a 40-foot (12-m) tugboat balanced between two coral heads, leaving room for divers to swim under the hull. However, the most famous is Theo’s Wreck, the first artificial reef in the Islands of The Bahamas, thanks to the efforts of Theo Galanopoulos. This 230-foot (70-m) ship was once an interisland bulk cement carrier known, appropriately, as MV Island Cement. Today the wreck rests in 100 feet (30 m) of water and is beautifully adorned with brightly colored corals and sponges.

Grand Bahama’s extensive underwater cave system provides a thrilling dive for the seasoned diver. Ben’s Caves may be accessed by well-maintained walkways and ladders leading to the openings. Haloclines, stalactites and stalagmites create a visually fascinating scene within the cave system. Cave certification, a permit and guide are necessary when diving in this system.

Shark dives are offered by two companies on the island. Participating in this unique dive is an exciting opportunity to closely observe these magnificent top predators as they are fed by trained divemasters in chain-mail suits. Divers may feel a little apprehensive at first, but it is doesn’t take long before the majesty of these incredible animals creates a sense of awe for the observers. 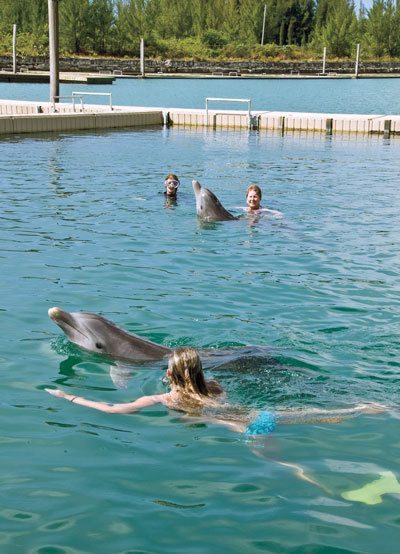 For the less adventurous diver or visitor, there are always dolphin encounters. The first option is to be with dolphins in a nonswimming area, where children with parents are able to touch the animals. The second is a dolphin swim, where visitors swim with the dolphins as trainers guide them through playful routines. The third is a reef dive, where divers and trained dolphins have the opportunity to interact in an open-water environment. Regardless of the choice, visitors are certain to journey home with wonderful pictures and special memories of these intelligent animals that will last a lifetime.

There is no question that Groves’ vision for Grand Bahama has become a reality. With the passage of the Hawksbill Creek Agreement in the 1950s, new life was infused into the island and continues today through the energy of new developments. The island offers a multitude of activities available for visitors of all ages, and with warm, friendly locals and the natural treasures of the isle, Grand Bahama is an alluring vacation destination close to home – just as he wanted it to be.

By Ruth and Barry Guimbellot