The rhythms of the tides dominate life around the edges of the oceans. Understanding and using these rhythms can make a trip to the ocean more enjoyable — and maybe even safer. Even though they’ve heard of the tides, maybe even answered questions about them in science class in school, people who grow up far from the ocean are often amazed on their first seaside visit to see the regular rise and fall of the ocean’s water. The tides begin with the tug of the moon, but the sun, the shapes of the oceans and even the Earth’s rotation all come into play to create the tides.

Unlike much Western scientific knowledge, our understanding of the tides didn’t begin with the Greeks and Romans. Differences between high and low tides around the Mediterranean Sea are only around a foot or so, which makes little difference to fishermen and mariners. The natural scientists of Greece and Rome had no particular reason to wonder about the rhythms of the tides.

Effects of moon’s position above or below the equator.

A. High tide on side toward moon is in the Northern Hemishpere.

B. High tide on side away from moon is in the southern Hemisphere.

The story is different along the coasts of France and Great Britain. Here, the water’s depth can change as much as 30 feet/9 m from high to low tide. Early scientists observed that the tides were related to the movements of the moon in complex ways. The greatest differences between high and low tides were around the times of the new and full moon, while the range was smallest at the quarter moons. But they were unable to explain why. Even though no one was able to explain even how the moon and tides were related, long observations of the tides led to various rules for making predictions. Good records of the daily tides showed relations to the movements of the moon and sun that could be used to predict when the tides would be high or low in the future.

As early as the year 1213, ship captains were using tables showing the times of high tides at London Bridge to plan when to set sail. As British sea power and commerce grew, the ebb and flow of the tides were observed in more and more places around the world. Tide predictions were made, even though no one could really explain why the ocean’s water rose and fell on regular schedules. 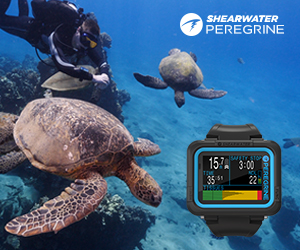 The Law of Gravitation

Real understanding of the tides began with Isaac Newton, who used his law of gravitation in the late 17th century to explain the motion of the planets, and how the moon and sun give the tides their initial push. Figure 1 gives a simplified view of how the moon would cause two bulges of water on the Earth if ocean covered all of the Earth. It turns out to be much more than a simple matter of the moon’s gravity “pulling” water toward it.

We like to talk about the moon orbiting around the Earth, because that’s what it looks like it’s doing. But if you want to accurately work out the mathematics of the Earth-moon system, including explaining the tides, you have to realize that the Earth and moon are rotating around a point about 1,060 miles/1,707 km under the Earth’s surface on the side toward the moon. At the same time, the Earth is spinning on its axis. This motion sets up what is often called a centrifugal force, pushing water away from the moon, while gravitational forces pull water toward the moon. This sets up the pattern of forces pushing water as shown in Figure 1.

In Figure 1, we’re looking down on the North Pole. If a large ocean covered the Earth, the bulges would stay in the same places while the Earth revolved under them, causing two high and two low tides about each 26 hours. Even if we assumed that the Earth were covered with water, there are still more complications to understanding the tides. As the moon orbits the Earth, it doesn’t stay over the equator, but moves to the north and south. For about a half month it’s north of the equator; the other half it’s over the Southern Hemisphere.

Greatly simplified view of the moon’s role in the tides.

(Not to scale. Height of tides is greatly exaggerated.)

While the sun is much larger than the moon, the effects of its gravitational pull are less because it’s so show the effects of the sun’s tidal bulges. In Figure 3A, the sun, moon and Earth are in a nearly straight line, with the dark side of the moon toward the Earth. This is the situation at the new moon. The moon’s and sun’s tidal bulges work together to make the highest high tides and lowest low tides of the month.

The forces combine the same way during the full moon, when the moon is on the opposite side of the Earth from the sun. In both cases, we have “spring” tides. The name has nothing to do with the season, but comes from the idea that the tides “spring up” at this time.

Figure 3B shows what happens at the quarter moons, when the moon’s and sun’s tidal bulges are working at cross purposes. The difference between high and low tides is the smallest of the month. These are called “neap” tides.

The distance from the Earth to the sun and moon varies, which explains why the range of the tides differs not only with the phase of the moon, but also with the time of year. Since gravitational force depends on distance, the pull of the moon or sun on the tides is strongest when they are nearest the Earth.

At least twice each year and no more than five times a year, the moon is at the closest point in its orbit — perigee — within 36 hours of the time that the Earth, sun and moon are lined up at new or full moon. These conditions create the highest spring tides. If they occur from November through February when the Earth is nearest the sun, the tides are even higher.

Most of the time, only the closest observers of the tides are likely to notice these extra-high tides. They might cause some minor coastal flooding, but that’s it.

But if a strong ocean storm happens to occur at the same time as unusually high tides, it’s a disaster. One of these storms began March 6, 1962, and pounded the East Coast from the Carolinas to New England for 65 hours, pushing the unusually high tides even farther inland, wiping out entire beach communities. This “Ash Wednesday” storm remains the standard for measuring East Coast storms. If a hurricane happens to hit during the normal high tide, its storm surge will push water farther inland than it would at low tide, increasing the damage.

Tides are really the longest waves on Earth, stretching across oceans. The tides tend to slosh back and forth with the pushes from the various combinations of gravitational force. As the tides slosh back and forth, the Earth’s rotation changes their direction of movement, just as it does the path of winds flowing across the Earth.

This is why the tides move from north to south along the U.S. Atlantic Coast and south to north along the Pacific Coast.

The frictional drag of water along the ocean floor also keeps the tides from acting as simple waves forced by the moon’s and sun’s gravitational forces. The continents add more complications. The waves formed by the pull of the sun and moon slosh back and forth in the ocean basins as Coriolis force turns them.

The size of an ocean basin determines whether places around it have semi-diurnal tides, diurnal tides or a combination of the two known as “mixed” tides.

Places along the Atlantic coasts of North America and Europe have two high tides and two low tides during the tidal day of about 24 hours and 50 minutes. These are semi-diurnal tides. A few ocean areas, including parts of the Gulf of Mexico, have only one high tide and one low tide a day. These are diurnal tides. Other areas, including the Pacific Coast from Alaska to South America, have two high tides and two low tides a day, but the heights of the highs and lows are different. These are “mixed” tides. They bring a “higher high water,” a “lower high water,” a “higher low water” and “lower low water.”

All these complications make predicting the tides tricky. Tide tables are based on both long histories of past tidal measurements and high-level mathematical operations that combine the waves caused by all the different forces. Before the days of digital computers, huge, elaborate mechanical devices that physically combined the various kinds of motions were used to predict the tides and create tide tables.

How Tide Tables Are Useful

You don’t have to really understand the tides to make use of them when you visit places along the ocean. Tides help determine when the fishing is likely to be best, when the water is most likely to be clear, when some currents could be dangerously fast for diving in a particular area, when rocks are likely to be above or underwater, when a channel will be deep enough for a boat, and even the best times to walk or jog on a beach. When the tide is going out along a sandy beach, it uncovers firm sand that’s great for walking or running. At high tide, along the same beach, you will have to slog through soft sand to keep out of the water.

In the United States, the National Oceanic and Atmospheric Administration’s National Ocean Service does the calculations needed to produce tables showing the times of high and low tides along all the U.S. coasts and many other parts of the world. The “Tides on the Web” sidebar tells you how to obtain this information. NOAA’s tide tables are used to produce local tide tables, which many marinas, fishing tackle shops and dive operations give away as promotions. Newspapers and Web sites in places near the ocean usually have local tide tables as well.

With the local tide table on hand, you’ll find it easy to get into the rhythm of the tides and ease away from the clock that dominates your days at home.

Tides on the Web

Here are some World Wide Web sites with information about the tides, including predictions…

The Wethey Lab at the University of South Carolina has a “Tide and Current Predictor” with information for the USA and other parts of the world. http://tbone.biol.sc.edu/tide/sitesel.html