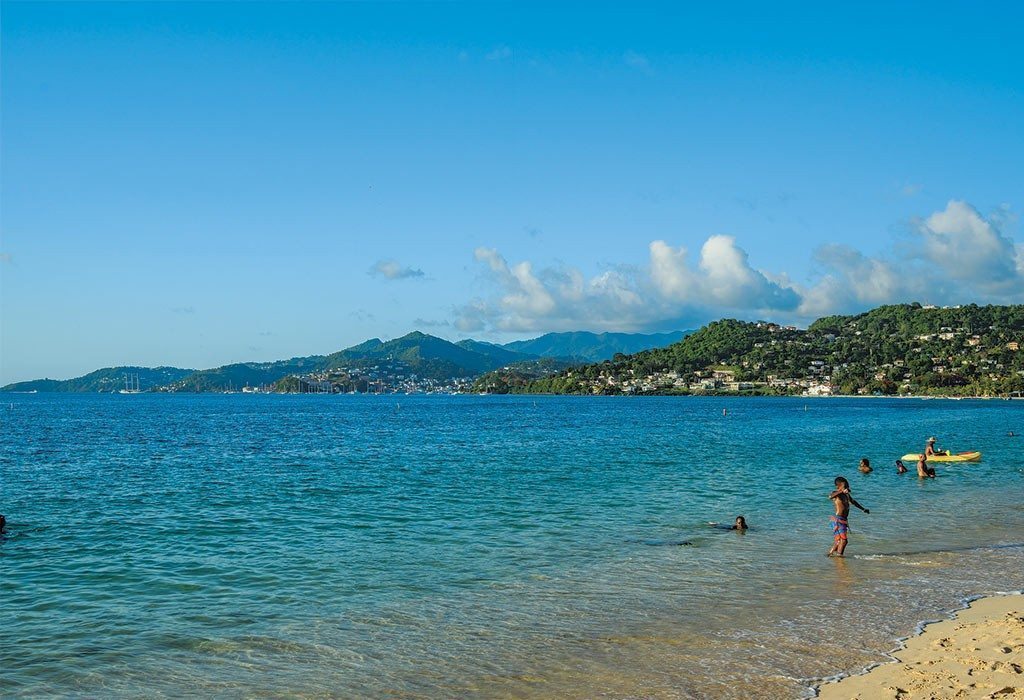 Visitors to Grenada are in for all sorts of treats when exploring the charming West Indies Island known as the “Spice Island.” Verdant mountainous rain forests fill the interior of Grenada. The roaring sounds of waterfalls punctuate the silence of the forests, and stunning beaches wrap the island in soft white and black sand. The turquoise water of the southern Caribbean creates the perfect place to have fun in the sun. Vacationers can enjoy the island by hiking on nature trails and diving into the amazing underwater world, and experience its heritage, traditions and culture by visiting spice plantations, ancient forts or historic churches. 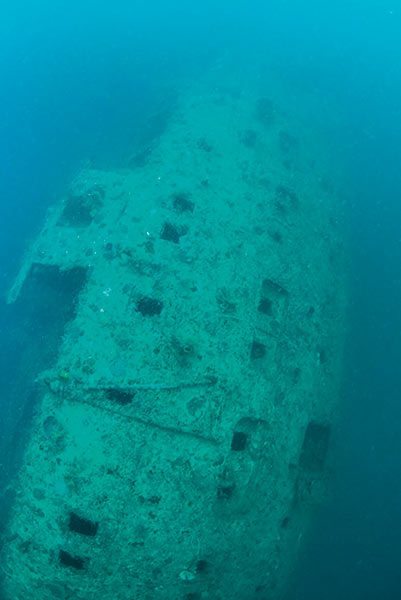 Life began for the Bianca C in 1939 in a French shipyard where it was christened the Marechal Petain. Its story begins with a bad omen when retreating German forces sunk the ship in August 1944. It was raised in 1946 and rechristened the La Marseillaise. It was eventually sold to an Italian family firm, refitted as a cruise ship, and renamed Bianca C after one of the family’s daughters. On October 22, 1961, bad luck struck again when one of its boilers exploded and fire broke out. Of the 673 passengers on board during the fire, there were only two fatalities. The British Frigate Londonderry sailed from Puerto Rico to assist the still-burning ship, but the towline snapped. The Bianca C slipped into the sea, becoming the largest shipwreck in the Caribbean.

The Island and Its People

A fiery underwater volcano gave birth to the mountainous island of Grenada. Today the island is an unspoiled eco-paradise with lush rain forests and beautiful beaches. Grenada is the most southerly of the Windward Islands, with an ideal climate cooled by trade winds. Showers are common, but typically short and intense, usually occurring during the night or early morning hours. The mountainous interior of the island consists mostly of rain forests and preserves. The Atlantic spans the eastern side, with the warmer waters of the Caribbean on the western side. The climate is well-suited for the growth of various spices and fruits.

When Christopher Columbus sailed the southern Caribbean in 1498, he named the island Conception. Indigenous Amerindians were the first to live here. By the time the French arrived in 1650, the Caribs were the main inhabitants, having enslaved or killed the Arawaks. Battles between the French and Caribs continued until the French won in 1651. Rather than surrender, about 40 Caribs leapt from a 100-foot (30 m) vertical cliff into the sea, now called Caribs’ Leap. The British later challenged the French. Their struggle ended in 1763 when the Treaty of Paris gave Britain possession of the island they named Grenada.

In the 18th century, crops such as sugar, cocoa and coffee were grown on the fertile land. Bananas and breadfruit were added in the 1790s. When nutmeg was brought to Grenada from Indonesia, it eventually became the “king” of spices produced on Grenada.

On February 7, 1974, Grenada gained independence from Britain and now operates under a parliamentary democracy.

Grenada is a tri-island state consisting of Grenada, Carriacou and the tiny island of Petite Martinique. The capital city of St. George’s is the largest city on the island. The city has a West Indian flavor, bustling with activities. From the harbor, this picturesque city spreads for miles in every direction. Pastel-colored homes are built along the waterfront and into the hills. Narrow streets lined with shops meander across the steep hills. Warehouses, restaurants and shops line the waterfront.

St. George parish includes the community of Grand Anse. Most tourist accommodations are located near the beautiful Grand Anse Beach or along the southern coast overlooking small bays. St. George’s Harbor is one of the most unique harbors in the Caribbean. Horseshoe shaped and deep, it was originally formed in the caldera of an ancient volcano.

The 340-foot- (103 m) long Sendall Tunnel separates the Esplanade on the bay side of town from the harbor side. The Esplanade has markets filled with fish, meat and produce, a cruise ship terminal and a mall.

Since 1983 Grenada has continued to gain popularity as a vacation destination. To encourage tourism, Grenada has developed a modern infrastructure, reliable utilities and modern telecommunications. One of the best attributes of Grenada is its people. The Grenadians are happy people who take pride in their country. They are known for their warm hospitality. 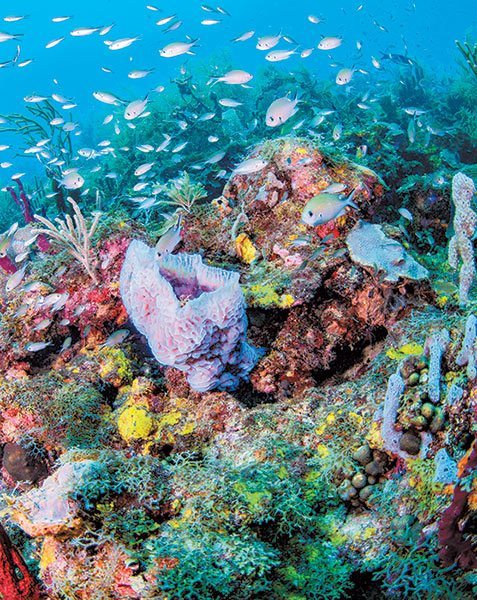 Grenada’s most notable wreck dive is the Bianca C. The 600-foot (182 m) cruise ship rests in 167 feet (51 m) of water. Because of the depth of the wreck and occasional strong currents, this site is best suited for advanced divers. The wreck is adorned with life, including large black coral trees, colorful sponges and gorgonian corals.

Another enjoyable wreck is the Veronica L. A popular night dive, the shallow wreck is covered with growth, making it especially enjoyable for underwater photographers.

Grenada is known for the world’s first underwater sculpture park. Work began on the sculpture park in 2007. Today there are almost 100 sculptures in the spur-and-groove reef. One of the most fascinating sculptures is a ring of children holding hands. The newest sculpture is the nutmeg princess. Based on a 1992 children’s book, the sculpture depicts the “Nutmeg Princess” fabled to live at Grand Etang Lake. The princess lives by the motto, “If you believe in yourself, all things are possible.”

Grenada has plenty of exciting activities for everyone, ranging from adventurous to relaxing. Vacationers can try river tubing down a meandering river, or try hiking on trails in rain forests filled with breathtaking views. Mountain biking and sailing are both exhilarating. There are year-round regattas and races, with the most notable yachting event being the annual La Source Grenada Sailing Festival. Sport fishing is always a fun challenge.

Golfers will enjoy the nine-hole course in St. George’s. History buffs can enjoy visiting old churches such as a Roman Catholic Church with a Gothic tower. The Anglican Church was built in 1825; in 1904 a clock was added and now plays Westminster chimes on the hour. The Grenada National Museum, built in 1704 to house French troops, is now home to exhibits of historical objects and artifacts.

A tour of the historical site of Fort Frederick, completed by the British in 1791, is always interesting. Today the fort overlooks the city of St. George’s. The oldest fort is Fort George, built by the French in 1705. A spectacular 360-degree view of the island is possible from the fort. 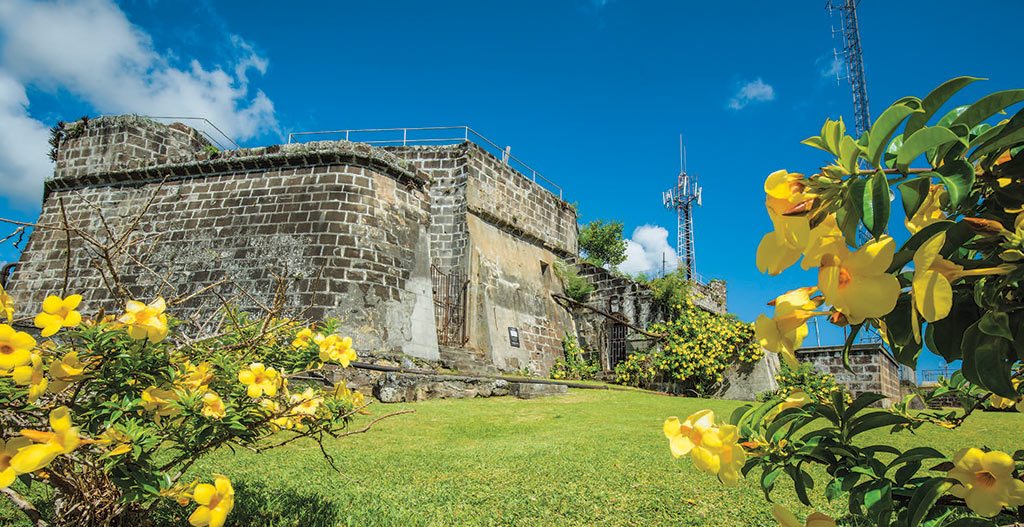 The historical site of Fort Frederick was begun by the French and completed by the British in 1791.

Island tours include visits to a variety of plantations as well as rum distilleries, gardens and craft centers. Be sure to visit a nutmeg processing station where you can learn about the nut-to-nutmeg process. Beaches and waterfalls are also delightful places to visit.

Many awesome waterfalls are in the rain forests. Annandale Falls, a mountain stream cascading 40 feet (12 m) into a natural pool, provides a gorgeous setting for picnicking and swimming. Deep within the interior of rain forests are reserves and sanctuaries such as Grand Etang National Park and Forest Reserve. Miles of trails wind through the forest and wildlife sanctuary. Lookouts allow visitors to see various species of tropical birds. Or you may be fortunate to see inquisitive mona monkeys watching from the trees.

Filling a crater of an extinct volcano is the 30-acre (12 hectare) Grand Etang Lake, 1,740 feet (527 m) above sea level. The Grand Etang Forest Center has a souvenir shop and snack bar. At the northeastern tip of the island is the 450-acre (180 ha) Levera National Park and Bird Sanctuary where Atlantic and Caribbean waters mingle. Within the park is Bathway Beach, a large strip of white sand protected by a coral reef. Other than national holidays, the beach is almost deserted, with one exception. From April to June, leatherback turtles come ashore to lay eggs.

Located in the dry forests of southwest Grenada is the Mount Hartman National Park and Dove Sanctuary. The 154-acre (62 ha) area is set aside for protection of the endangered Grenada dove, found only on Grenada. The endangered, endemic hook-billed kite and two native species of lizards also live in the dry woodlands of Mount Hartman. A viewing tower and trails allow visitors to observe the various dry forest species.

Grenada is blessed with 80 miles (128 km) of coastline framed with 45 lovely beaches. Some of the best beaches on the island are located just south of St. George’s. The most popular beach is Grand Anse Beach. Hotels lining the bay are filled with vacationers enjoying the sand and surf. The Grand Anse Craft and Spice Market welcomes guests and cruise ship passengers to sample their wares. Guests also find amenities such as food, drinks, access to watersports and convenient facilities to make their visit more enjoyable. For another family-friendly beach, visit Morne Rouge Beach and Bay for a refreshing swim. 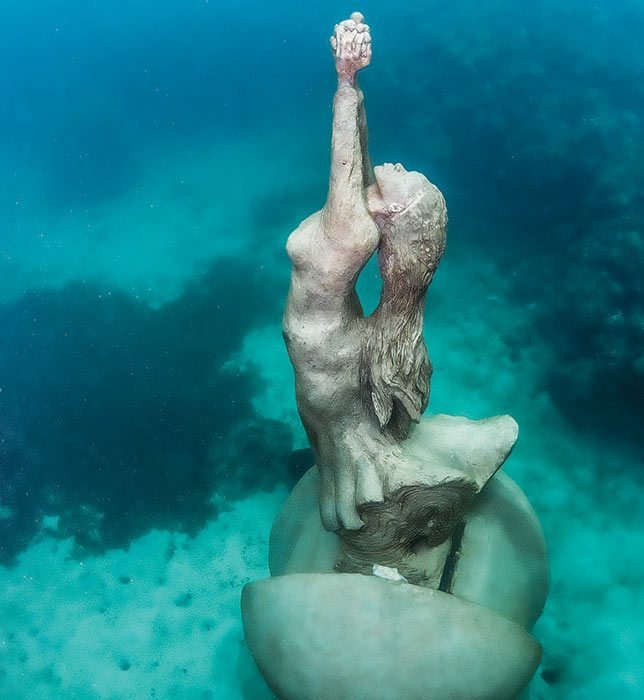 Island cuisine is a delightful combination of African, Indian and European culture, often flavored with herbs and spices grown on the island. A prime example is “oil down,” the national dish of Grenada — a thick stew of coconut milk, turmeric, breadfruit, callaloo or dasheen, dumplings and salt meat or smoked herring. Seafood is such a major part of island cuisine that a huge event known as Fish Friday Festival occurs every Friday night in the town of Gouyave. Locals and tourists alike gather to enjoy delicious seafood dishes such as barbecued snapper and shrimp kabobs. Seafood vendors line the streets, signaling the beginning of an evening filled with entertainment, food and fun for the whole family.

Grenada has many exciting festivals, with Carnival being the grandest celebration of all. The event begins in July and comes to an exciting climax on the second Monday and Tuesday in August. A huge calypso competition is held on Sunday night. The next day, J’ouvert morning, the street comes alive with thousands of masqueraders covered in colorful combinations of paint, mud and oil. Revelers dance to the rhythms of soca and steel pan until early Monday morning. With the new day, traditional mas bands perform for the Monday parades. The Monday Night Mas Street “jump-up” closes with revelers dancing in the streets waving fluorescent wands. Carnival Tuesday marks the end of the festival as people enjoy colorful bands parading through the streets one last time — until next year.

A separate carnival is held for children who dress in costumes and enjoy kid-friendly, fun activities.

It is easy to understand why Grenada is such an awesome vacation destination. The island is filled with beauty and adventure for visitors of all ages. Add the warm hospitality of the islanders, and you have the ingredients for a holiday in paradise.

Story and photos by Ruth and Barry Guimbellot

The authors wish to thank Sandals La Source Grenada and Aqua Center for their assistance with this article.