DURING your Open Water Diver certification course you learn a whole bunch of important skills and safe practices for scuba diving. Since your regulator supplies you with a constant supply of breathing gas while underwater, it makes sense that that you should keep the regulator in your mouth at all times while diving. The regulator retrieval skill is one of the “what if” skills meant to answer, “What do I do if my regulator accidently comes out of my mouth while I’m diving?” The fact is, things don’t always go as planned. If your regulator is accidentally dislodged from your mouth while diving, knowing how to retrieve it quickly is important. Performing this skill is relatively easy when in a controlled situation such as a pool. However, this scenario can be quite different in open water, especially if there is a current. The best way to master this skill is to practice it until you can perform it quickly and confidently.

Keeping your regulator in place when underwater is a top priority for divers whether novice or advanced. Most of us never expect to have our regulators pulled from our mouth. However, accidents do happen. For example, you and your buddy are swimming side by side when your buddy taps you on the right shoulder. You turn your head in response and your buddy’s hand gets tangled in the regulator hose. In an effort to withdraw their hand, they pull the regulator from your mouth. Or perhaps a diver is swimming in front of you and gets pushed close to you due to a current. In an effort to move away, he accidently kicks you in the face with his fin. Out comes the second stage with a flip of the fin. If it falls in front of you, quickly grab the second stage, place it in your mouth, clear it of water and continue the dive. If the regulator falls out of sight or gets caught on some object behind you, there are two specific ways to perform the regulator retrieval skill — the sweep and the reach methods.

RELATED READ: HOW TO RINSE YOUR REGULATOR

The sweep method of regulator retrieval consists of several steps. Follow the sequence as listed:

Step 1: When the regulator is dislodged from your mouth, immediately begin to slowly and continuously exhale a stream of small bubbles. This will help prevent overexpansion of the lungs if you unknowingly ascend during the recovery effort.

Step 2: Regardless of your position in the water column, you will be able to use the sweep method for retrieval of the regulator. Whether vertical or horizontal, begin the sweep by leaning with the right shoulder downward, allowing the regulator hose to swing and hang away from your body (Photo 1). In the horizontal position, it is helpful to have your head and torso slightly lower than your feet. This position allows the hose to swing to the side and slightly forward, making recovery easier. 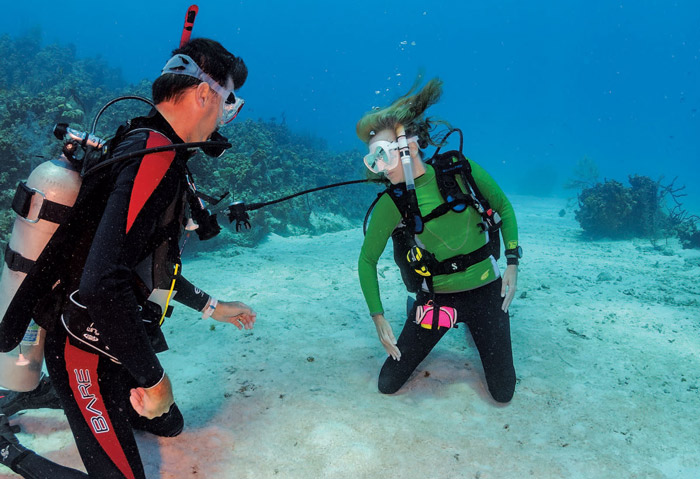 [ONE] Begin the sweep by leaning downward with the right shoulder, allowing the hose to swing and hang away from your body.
Photo by Barry and Ruth Guimbellot. 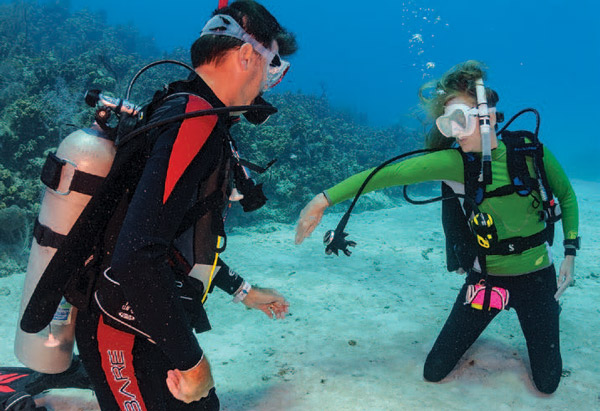 [TWO] With the arm fully extended behind you, swing the arm up and out until perpendicular to your body and look to your right to find the regulator hose is lying across your arm.
Photo by Barry and Ruth Guimbellot.

As you swing your arm in front of you, the second stage should be close to your right hand (Photo 3). 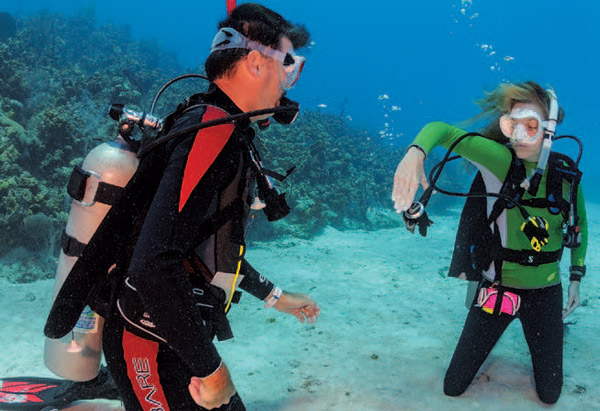 [THREE] As you swing your arm in front of you, the second stage should be close to your right hand.
Photo by Barry and Ruth Guimbellot.

With either hand, place the regulator in your mouth, immediately clear the regulator of water using the blast or purge methods (Photo 4) and begin breathing normally. Remember, when taking the first breath after clearing the regulator, do so cautiously to avoid inhaling a drop or two of water that might remain inside. 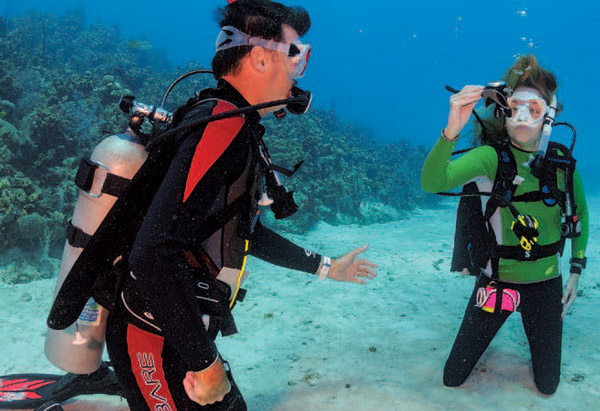 [FOUR] Use either hand to grasp the regulator, place the mouthpiece in your mouth. Immediately clear the regulator of water and begin breathing normally.
Photo by Barry and Ruth Guimbellot.

If your regulator becomes entangled and is pulled from your mouth, the reach recovery method might be your best option. To free yourself from an entanglement and recover the regulator, use the following steps:

Step 1: Any time the regulator is out of your mouth, remember to avoid holding your breath by exhaling tiny bubbles.

Step 2: With your right hand, reach back for the first stage and locate the primary second stage hose where it attaches to the first stage. Encircle the hose with the thumb and finger(s) — palm facing up — then slide down the hose while gently pulling to the front to free the second stage (Photo 5). 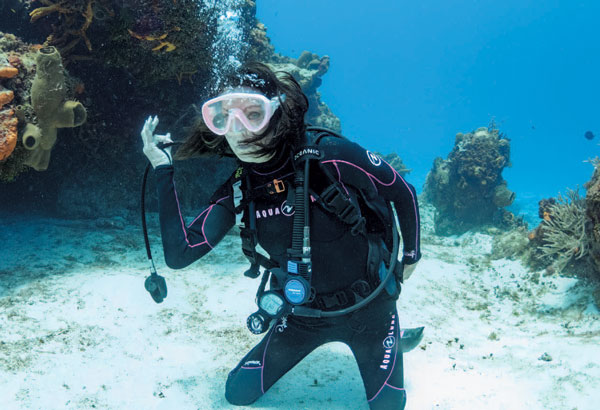 [FIVE] Encircle the hose with the thumb and finger(s) — palm facing up — and then slide down the hose while gently pulling to the front to free the second stage.
Photo by Barry and Ruth Guimbellot.

Step 3: Once free, place the regulator in your mouth and purge.

If you are unable to free the second stage regulator, make a quick switch to the alternate air source and signal for your buddy to assist you in untangling the regulator.

Step 4: Once your regulator is free, you may switch back to your primary second stage and secure your octopus.

Using either method, it can be advantageous to momentarily reposition the tank. Do so by grabbing the bottom of the tank with your left hand, pulling the tank towards your left side. In doing so, the top of the tank will move toward your right side. This may make it easier to sweep or to reach back and grab the second stage hose.

The best way to determine which regulator retrieval method works for you is to practice each method in a controlled situation such as a pool. For safety, always have a buddy with you when practicing the regulator retrieval skill. With sufficient practice, you will become adept at retrieving your regulator.

If the second stage regulator is a diver’s best friend, the octopus regulator is the diver’s second-best friend. The regulator and the octopus are responsible for delivering breathable air to the diver or, in some instances, the diver’s buddy. The regulator is the primary source of air while the octopus is the alternate air source. The octopus is used for sharing air with another diver, if necessary, in an emergency. Serving as an alternate air source, one type of octopus is a standard second stage regulator connected to the first stage by a long hose. The octopus, if configured as an auxiliary second stage, is usually connected to the right side of the first stage. The octopus hose might be yellow or some other bright color, making it easier for a diver in need to locate. When using an octopus with a long hose, place it within an imaginary triangle and attach it to the BC with some type of quick release (Photo 6). 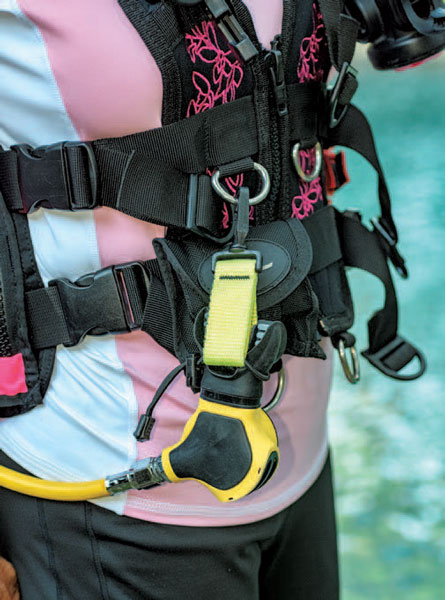 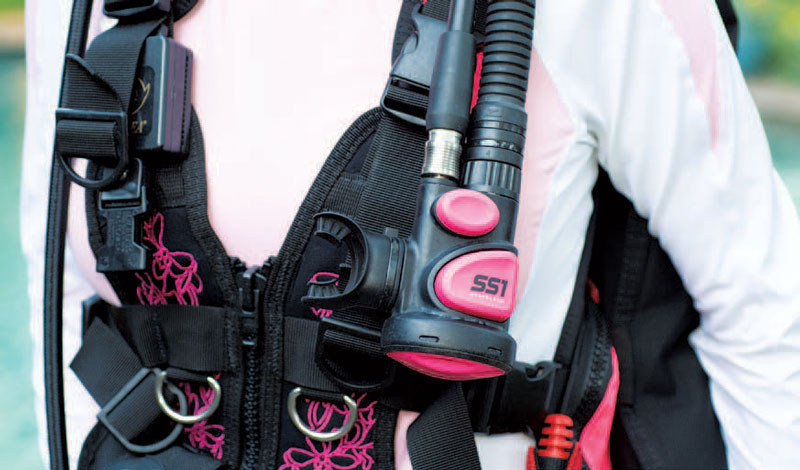