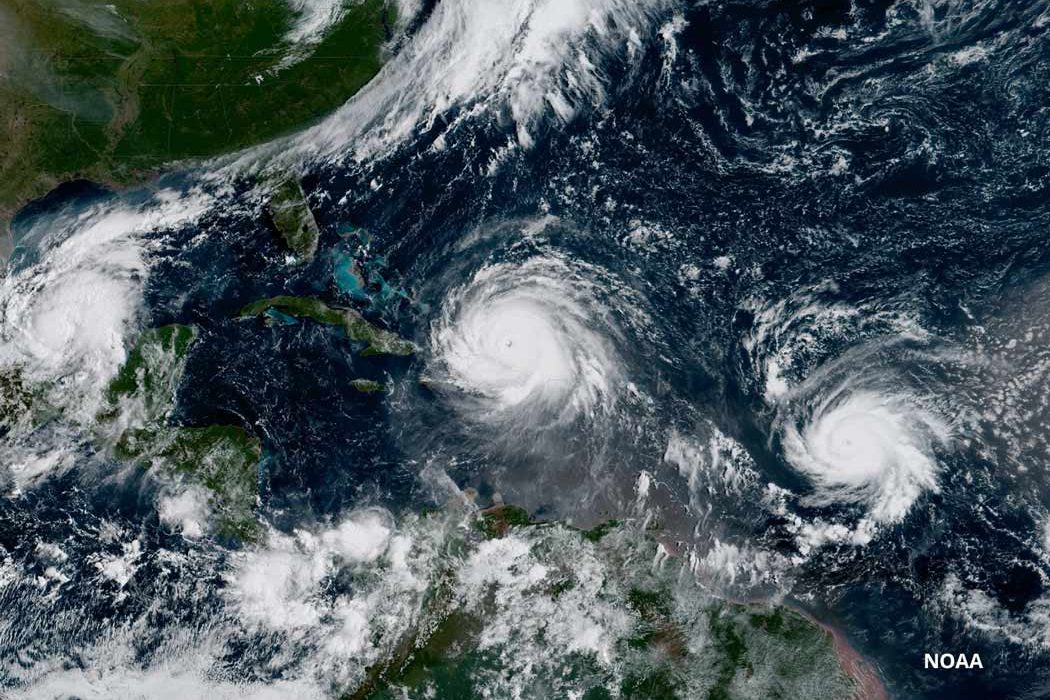 A satellite view of Hurricane Irma taken by NOAA.

This year’s Atlantic hurricane season now ranks among the top eight all-time most active seasons on record. As of mid-October, 15 named storms, nine hurricanes, and five major (Category 3 or stronger) hurricanes had formed in the 2017 Atlantic hurricane season, impacting several popular diving destinations in the U.S. and the Caribbean. While some affected businesses are currently closed with no clear re-opening dates, others have completed repairs and are back in business. Still others were outside the storms’ paths and have not experienced any disruption to their normal business operations.

For instance, the Florida Keys’ new advertising slogan is, “As the sun rises in the Florida Keys, so do we.” The Florida Keys officially welcomed back visitors October 1. Highways and bridges have been inspected and cleared, hotels have already reopened and many attractions are operating close to normal. Key Largo and the Upper Keys and Key West were least affected by the storm. Middle Keys dive operators experienced some damage and recovery efforts are well underway, although those with immediate plans to visit are advised to contact their travel specialist or dive center for an updated schedule of operations. It has been reported that some of the shallower reefs sustained damage and popular wrecks the Vandenberg and the Duane also had minor damage.

Aggressor Fleet, Explorer Ventures and All Star Liveaboards dive charter companies all have resumed operations. However, the BVI-based Cuan Law live-aboard is reportedly out of service at press time.

To follow is a general overview of popular dive destinations with links to their tourism bureaus. Before planning travel to affected areas, contact the resort and dive operator to learn their status. Also consider visiting your favorite dive locations’ Facebook page.

Antigua and Barbuda — Antigua escaped the worst of the hurricanes and should be fully restored in short order. Unfortunately, its sister island of Barbuda had near total destruction with its total population evacuated; visitantiguaandbarbuda.com.

Bahamas — minor damage was reported in some areas but resorts and dive operators are now open for business. Major airports throughout The Bahamas are operational including international and domestic service; bahamas.com.

Belize — was out of the path of storms; belizetourismboard.org.

Bermuda — was out of the path of storms; gotobermuda.com.

Bonaire — was well out of the path of storms and is fully able to receive divers; tourismbonaire.com.

Cancun — was out of the path of storms; rivieramaya.com.

Cayman Islands — no damage was reported and hotels and dive operators are operating as normal, although storm surge toppled the Kittiwake; caymanislands.ky.

Cozumel — was out of the path of storms; go-mexico.com.

Curaçao — situated outside the path of storms; curacao.com.

Florida Keys — most resorts and dive operators report they are open for business as usual; fla-keys.com.

Jamaica — was out of the path of storms; jtbonline.org.

Saba and St. Eustasius — both islands reported damage as a result of Hurricane Irma, but recovery efforts are reportedly nearing completion; statiatourism.com.

St Kitts and Nevis — some damage to homes and businesses on the east side, but resorts and dive operators on the west side were untouched and report they are open for business as usual; stkittstourism.kn; nevisisland.com.

St. Lucia — was spared a direct hit and operations are normal; stlucia.org.

Trinidad and Tobago — no damage; gotrinidadandtobago.com.

Turks and Caicos Islands — some hotels reported flood damage but all are now open for business; turksandcaicostourism.com.