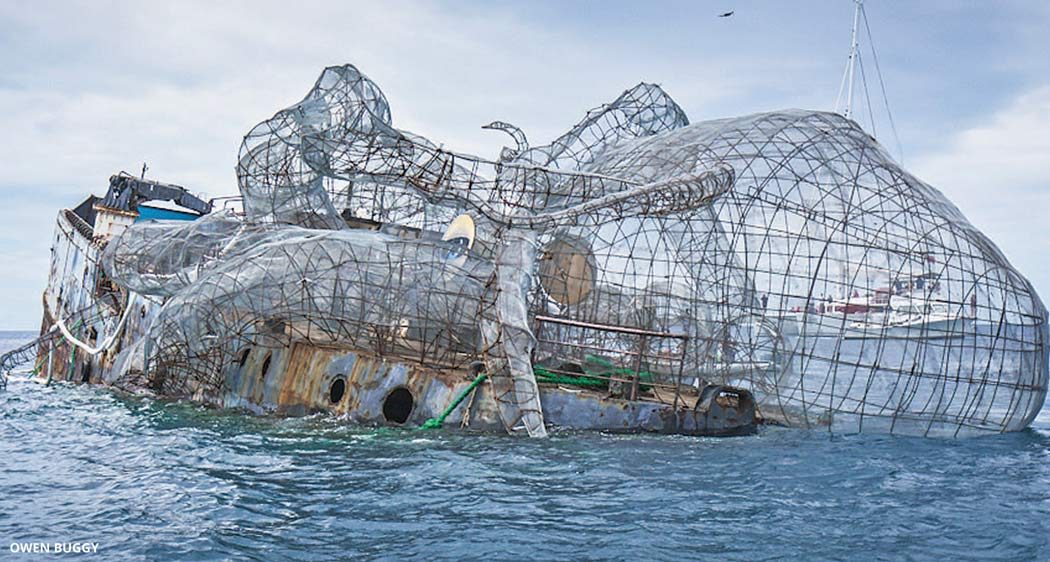 The scuba community was given a new diving destination in the British Virgin Islands (BVI) this past April. The eco-friendly marine habitat that is a blend of sunken ship and underwater art installation was established just south of Mountain Point in Virgin Gorda. The ship used was the 158-foot (48 m) Kodiak Queen and the art is an 80-foot (24 m) mesh and rebar sculpture of a kraken wrapping around her stern.

The Kodiak Queen was sunk in a location and depth that is accessible to both divers and snorkelers. The top of the wire Kraken lies 20-feet (6.1 m) below the surface and the ship sits on the sandy seabed at 55-feet (16.8 m). Certified open water divers are encouraged to explore the outside of the ship, leaving penetration for advanced divers. For those more experienced and qualified divers, several internal routes have been created with wide entry and exit points for safer exploration. Those enlarged corridors will eventually house additional artwork. In the warm water, the visibility is clear enough that the majority of the sea bottom art installation may be observed from the surface. 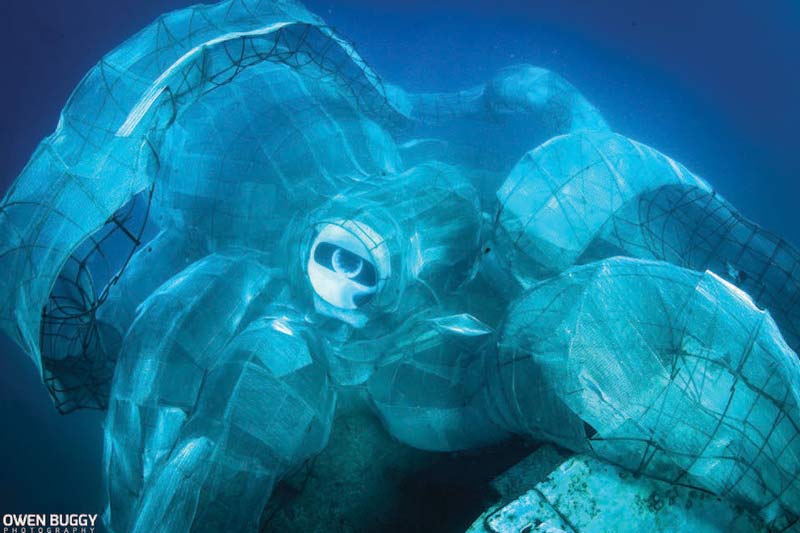 Before (above) and after of the Kraken sinking. Photos by Owen Buggy.

Through a combination of vision and kismet the Kodiak Queen, retired U.S. Navy barge YO-44, has had a long voyage to her new life as an art reef. The Navy barge gained notoriety as being one of only five ships that survived the attack on Pearl Harbor in 1941. After her decommissioning, she was reborn as a king crab vessel and salmon tender, the Kodiak Queen, working out of Kodiak, Alaska. In the early 2000s she was taken out of the fishery during a “crab buyback program” and could no longer fish anywhere in the world. The former Navy fuel barge was rusting away in a Tortola shipyard, waiting to be scrapped for metal when in 2012 historian Mike Cochran found her. Knowing the Kodiak Queen’s history, he set up a website in an effort to rescue the ship and attracted the attention of Owen Buggy, friend and photographer for Sir Richard Branson, founder of the Virgin Group controlling more than 400 companies. After seeing the website, he suggested the ship as an artificial reef and that was the birth of the innovative project.

The venture was called Project YOKO B.V.I. Art Reef, a fusion of the boat’s two names, and was a joint effort between Sir Richard Branson, entrepreneurial group Maverick1000, non-profits Unite BVI and Beneath the Waves and art production team Secret Samurai Productions along with a few other groups.

Sir Branson said, “It will be a unique platform for capturing people’s attention on the importance of addressing climate change, protecting coral reefs and rehabilitating vulnerable marine species.” The plan is for the hull of the ship to be a habitat for sea creatures including grouper, corals, sea sponges, turtles and even sharks. 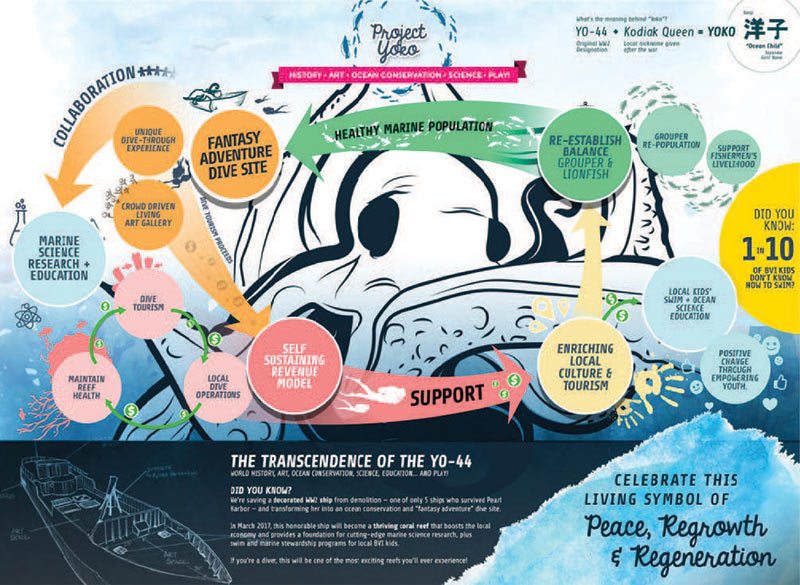 The six core initiatives of this giant combined reef and art project were to: Unite by honoring world history; Inspire by using art as healing; Heal through ocean conservation and rehabilitation; Advance via cutting-edge research in marine health sciences and stewardship of the marine ecosystems; Impact by boosting local economy and providing the Legacy of a self-sustaining marine park.

The sinking of the Kodiak Queen is only the beginning for this ambitious project. Phase 2 is to encourage coral growth on the giant kraken and add other artworks to create living spaces that will stimulate the regeneration of vulnerable species such as the endangered Atlantic goliath grouper.

The location is easy to reach for cruise visitors arriving in Virgin Gorda or Tortola. It is expected that dive boat operators will charge about $100 for single-tank dives and to donate part of the proceeds to a fund for regional causes that include marine preservation programs.