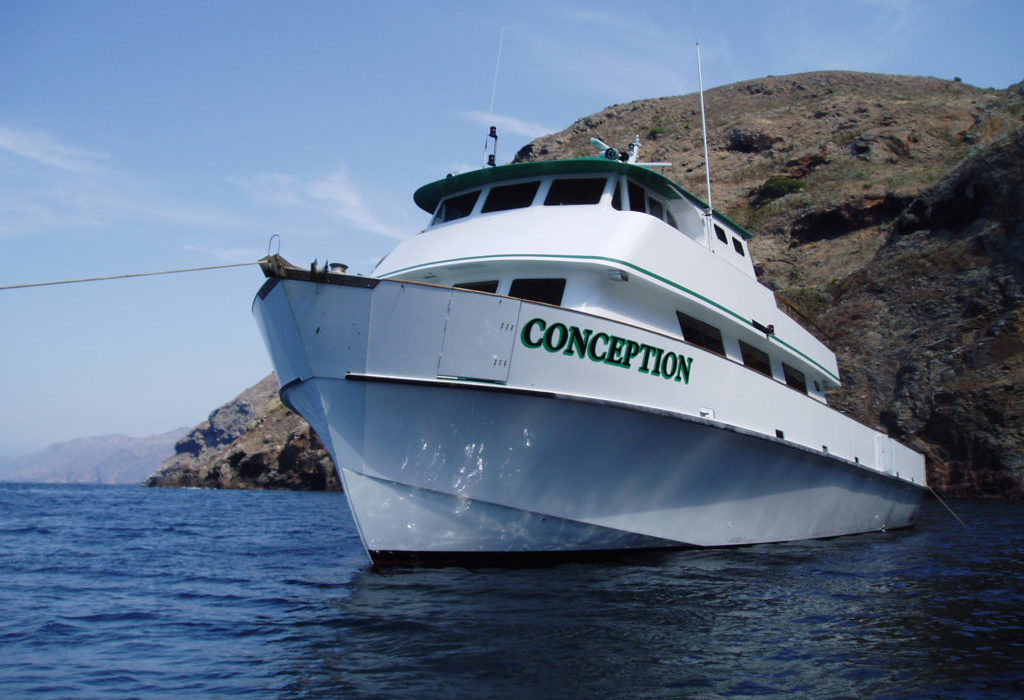 We join with our extended scuba diving family to express our sincere condolences to all those affected by the deadly fire onboard the M/V Conception in the early hours on Monday, September 2, 2019.

There has been a great deal of misinformation circulated by major news media outlets.

An investigation by the National Transportation and Safety Bureau is currently underway.

Here’s what we know, based on information provided by the U.S. Coast Guard and a recent interview by Ventura’s Spectrum 1 News with Truth Aquatics Inc. owner Glen Fritzler:

There were 39 people on the 75-foot commercial vessel when it caught fire around 3:30 a.m. while anchored off Santa Cruz Island in the California Channel Islands and became engulfed in flames.

Five crew members were able to evacuate. The bodies of one crew member and 32 passengers have been recovered from the vessel, which burned to the waterline and sank in about 60 feet of water. One passenger remains unaccounted for and is presumed dead.

The crew that escaped the fire was able to do so because they were on the top deck when the fire broke out. The crew member and passengers that perished in the blaze were presumably asleep in their bunks located below the main deck and were likely trapped by flames.

The below-deck bunking area on board the Conception was accessible by a main stairway and also had an emergency escape hatch. The stairway did not have a door.

The Conception was launched in 1981 and operated as a US Coast Guard inspected vessel. It had fire extinguishers, first aid equipment, radio communications and firefighting equipment on board and was compliant with US Coast Guard regulations at the time of the blaze.

The Truth Aquatics fleet, which consists of the vessels Truth, Conception and Vision has run thousands of California boat charters over the years. For more information, see truthaquatics.com.

Here is a transcript of the interview from Spectrum News 1 with Truth Aquatics owner Glen Fritzler:

VENTURA, Calif. — The owner of the vessel “Conception” talked exclusively Tuesday morning with Spectrum News 1 about a deadly fire on his boat Monday off the Southern California coast.

“I’m numb,” said owner and operator Glen Fritzler of Truth Aquatics Inc. in a phone interview. “There were a lot of people that were on that boat that I knew personally, people that I had dealt with for decades.”

There were 39 people on the 75-foot commercial vessel when it caught fire around 3:30 a.m. Monday, according to the U.S. Coast Guard.

Five crew members were able to evacuate. Twenty people have been confirmed dead as of Tuesday morning.

The group was on a diving trip for Labor Day weekend.

“Of all of the years I’ve been in this business, I’ve never seen or heard of anything like this,” Fritzler told Spectrum News 1. “It’s a complete tragedy. It’s horrible.”

He said the company will shut down operations for a couple weeks out of respect for the families involved.

“We all have so many questions at this point,” he said. “We need answers like the public needs answers.”

Truth Aquatics has a fleet custom designed for diving, according to the company website. It began working with Channel Islands National Park in 1998.

Below is more from the interview with Fritzler.

Brunell: ”What do you want the public to know?”

Fritzler: ”I want people to know that there [are] two entrances into the bunking area: a main entrance and an emergency escape hatch. I want people to know that the area, the salon that people enter into the boat to access the area, there were no doors. It’s a wide-open doorway and no doors. There were no locked doors anywhere … We did lose a crewman that was below deck, stationed down below decks with passengers, perished as well as best as we know … That was the only reason that any of the crews survived is they were on the upper deck and the flames reached up there and they had to make a large leap off the boat to escape the boat … I want them to know that a couple of the crewmen swam to the stern of the boat, that could not access any of the fire hoses because they were engulfed.”

Brunell: ”I understand that people also think that the mayday calls were made from outside of the boat. Were they made on the dinghy or were they made in the wheelhouse?”

Fritzler: ”They were made in the wheelhouse. He made two calls. The second call where you can hear him say, “I can’t breathe.” That was the second call. At that point he had to jump off the boat. The other crewmen were already off the boat. The captain was the last to leave the boat crying to Radio Coast Guard.”

Brunell: ”What do you think about the speculations and the people out there who think the crew bailed on the passengers?”

Fritzler: ”There is no way. They did everything in their power to help, but the flames just spread. That’s the investigation. Nobody understands why this fire spread like it did … The investigation has to continue, but you know, we’re all so surprised. We also have to remember this boat’s been in operation since 1981. It’s taken thousands upon thousands of people out over that period of time with no fire incidents whatsoever.”

Brunell: ”Is it surprising to you that so many people were not able to get out? I mean, can a fire spread that quickly on a boat that there would be no time for anyone to leave that bunk area?”

Fritzler: ”Yes to both. I am utterly surprised, and the only thing that I can possibly conceive is that people suffocated quickly. The smoke, well I guess it was billowing.”

Fritzler: ”They’re feeling horrible. I’m sure it’s survivor’s guilt. One of our crewmen was lost in this incident as well. They’re a wreck. They’re an emotional wreck.”

Brunell: ”Is there any type of accelerant on the boat? I know that the tanks are very flammable, but was there any propane or anything else that would cause this type of fire?”

Fritzler: ”No. On the back deck, that was one of the last things to burn, there [were] some oxygen bottles that the divers use. The rest of the scuba tanks are just air, or what we call Nitrox, which is a higher concentration. It’s a 32 percent concentration that divers use, but it’s a low oxygen count and they were out on the back deck and that was the last to burn. As far as the accelerant inside the boat, there is no gas, no propane, no diesel. It’s all electric.”

Brunell: ”How trained are people, are your crew members, to deal with an explosion or a rapidly moving fire?”

Fritzler: ”They’re all well-trained. They’re all mariners. They’re all trained, and you know, unfortunately we didn’t have access to any of the firefighting equipment.”

Brunell: ”Is there anything else that you think the company or these boats could have been equipped with that would’ve prevented this?”

Fritzler: ”No. Honestly not at all. If that was the case, I would’ve done it because we are a top-notch company, and I’ve invested my entire life into this company, and I take it very seriously and that will be disclosed. I’m sure through Coast Guard records, the Coast Guard has the utmost respect for our operation and what we do … I’m sure something’s going to be learned from this … Unfortunately, these kinds of accidents, regardless if it’s a boat or an airplane, we learn from them and there will be something learned, and it’s a very, very unfortunate event. We’re all sickened by it, and the entire crew and staff is. Words can’t convey.”