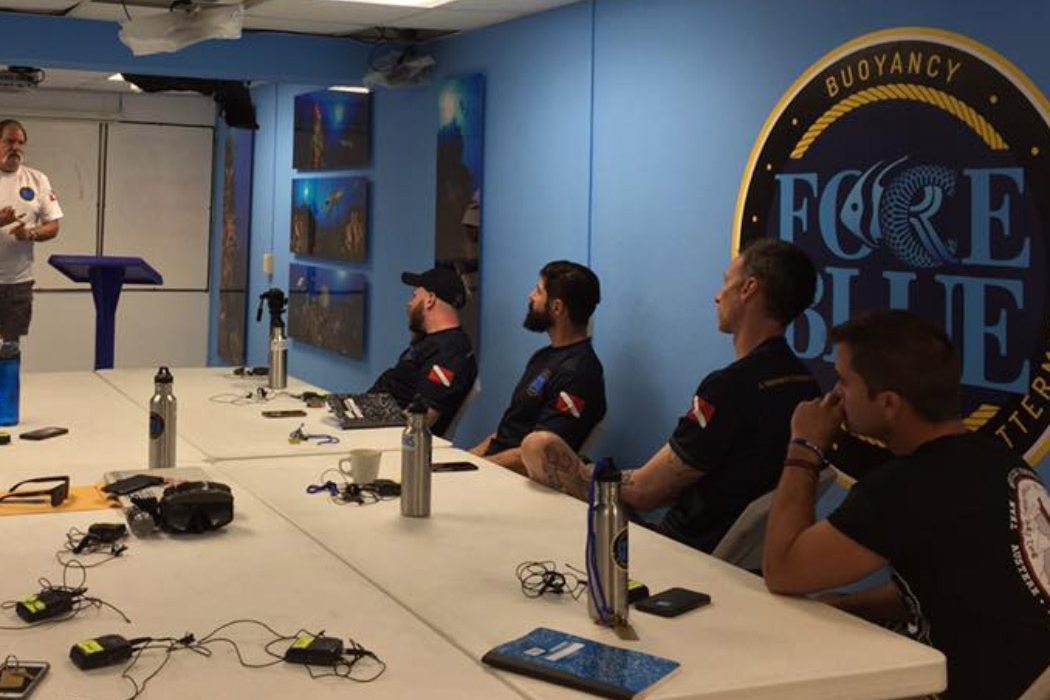 Six Special Ops veterans of the Iraq/Afghanistan wars,  will be deployed soon to be taught how to adapt their military skills to rebuild and preserve coral reefs off the coast of Grand Cayman. Meet the FORCE BLUE TEAM ONE members.

THIS IS NOT A DIVE THERAPY PROGRAM–There is a huge fundamental difference between using scuba for therapeutic reasons and doing what FORCE BLUE does. I’ve worked on a lot of stories throughout the world where we would have veterans receive their scuba certification and it is amazing to see all of the windows of opportunity the new skill opened for the wounded.

Our FORCE BLUE veterans are trained in the military on re-breathers and to use those skills and others to carry out active, covert underwater military missions. In fact, it is a requirement they are militarily trained in combat diving in order to be considered for future deployment with FORCE BLUE.

FORCE BLUE is specifically created to give the Special Ops, SEALS & RECON veterans who are dealing with PTS & are already EXPERTS in underwater tactical missions, a new MISSION in a civilian environment: To preserve the global underwater environment which desperately need the skills these specialized Troops possess.

FORCE BLUE is mission driven as are these amazing men and women. The incidents of suicide among this particular demographic of veterans has been reported to be linked to the fact that, in part, when they separate from the military, they no longer know how to adapt to civilian life without having a specific mission.

FORCE BLUE teaches veterans: their skills and training are transferable and can still make a positive difference, camaraderie does exist after combat and helping can be the antidote to harming.

It is a near-perfect marriage between helping our military to learn to save themselves while they are saving our environment.

As you know, more than 40% of the 3 million men and women combat veterans of the Iraq & Afghanistan wars are likely to experience some form of post-traumatic stress (PTS,) due in part to difficulty adjusting to an unstructured life after military order and/or trouble relating their military skills to civilian work.

More alarmingly, 22 veterans a day commit suicide – more than three times the U.S. national average. Just 2 weeks ago, a U.S. Marine RECON veteran, father of three children, committed suicide. FORCE BLUE gives former military trained combat divers and veterans of Special Operations Forces an important new mission: to experience and explore one of the most critically endangered ecosystems on the planet–and to adapt their training and teamwork to rebuild the fragile ecosystem and aid in its protection.

FORCE BLUE teaches veterans: their skills and training are transferable and can still make a positive difference, camaraderie does exist after combat and helping can be the antidote to harming.

Co-founder U.S. Marine Master Sgt. Rudolph “Rudy” Reyes: “I struggled with PTS and depression after returning home from multiple tours in Iraq and Afghanistan partly because of the emptiness I felt of no longer having a mission. Diving to me was a part of a military mission to destroy a potentially dangerous underwater target under the cover of darkness; it was never about enjoying or embracing the unique underwater world. My first recreational dive was nothing short of life changing. Through FORCE BLUE missions to rebuild coral reef vital to our oceans’ ecosystems, we aim to change the lives of many veterans who are struggling with PTS for the better.”[/vc_column_text][/vc_column][/vc_row]

Five of our veterans (Rudy Reyes, Roger Sparks, Geoff Reeves, Will Hinkson and Jon Slayer) are FORCE BLUE TEAM ONE divers. The 6th, Nathan Quinn, is a former combat medic who is embedding with us from TEAM 5 FOUNDATION, another veterans’ nonprofit organization. All served multiple tours of duty in Iraq and/or Afghanistan in addition to performing contract work in Africa and the Middle East, and each has experienced some form of PTS since returning home. Rudy, for instance, who was never actually wounded in combat is 100% disabled as a result of his PTS. Here are the snapshots of each… 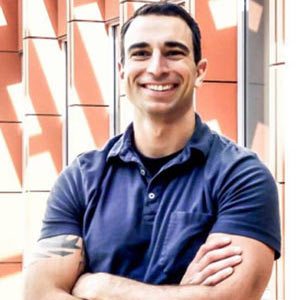 Will served as a E-5/Sergeant 5 years in the Marine Corps. He is the recipient of the Iraq Campaign Medal, Combat Action Ribbon, Humanitarian Service Medal, Navy and the Marine Corps Achievement Medal. He was also a security contractor in high threat areas overseas. Will is also a very accomplished athlete and trainer. He was a competitive swimmer and distance runner in high school, teaching Special Olympics and giving swimming lessons as his high school job. His beliefs in fitness as a form of physical, mental and spiritual health led him to start a CrossFit affiliate at the Embassy in Kabul, Afghanistan of all places – the first of its kind at an Embassy anywhere in the world. He ran that for three years in Kabul before leaving to launch Huron River CrossFit in Ann Arbor, Michigan. 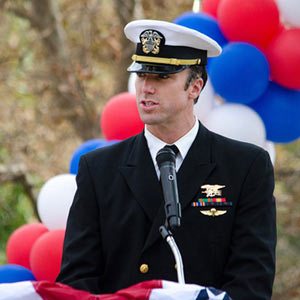 In hopes of fulfilling a dream of becoming a Navy SEAL, Geoff joined the military right out of college. After several advanced training schools and having earned the coveted SEAL “Trident,” Geoff reported to SEAL Team 10, helping commission the new team and becoming a “plank owner.” Upon returning to the US, new orders took him to the Navy Parachute Team, “Leap Frogs.” They performed dynamic parachute demonstrations into stadiums for Major League Baseball, National Football League, NASCAR, horse races, high schools, and X-Game events nationwide. Geoff took his determination and moved to Los Angeles to pursue a career in Hollywood. He has worked as an actor and host, and able to be seen in movies, television, commercials, webisodes and video games. Some of his credits include Transformers and Iron Man. 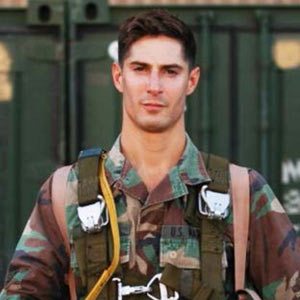 A veteran of both Iraq and Afghanistan, Rudy served with distinction as a member of the United States Marine Corps illustrious 1st Reconnaissance Battalion and played himself in HBO’s Generation Kill, a miniseries based on the bestselling book by Rolling Stone reporter Evan Wright. A graduate of the Marine Corps Combatant Diving, Scout/Sniper and Search, Evasion, Resistance and Escape (SERE) schools, Rudy has worked as a counter-terror contractor for the Department of Defense, trained African wildlife preserver rangers in anti-poaching techniques and, most recently, appeared in National Geographic Channel’s Ultimate Survival Alaska. Rudy is the author of Hero Living, a book which chronicles his warrior philosophy and teaches others how to follow it. 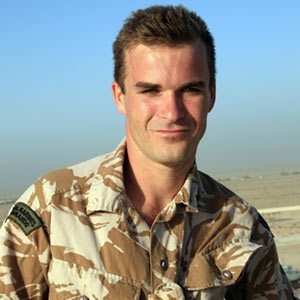 Jon was born and raised in Durban, South Africa – surf mecca and shark hotspot. His education was not in a classroom. As a young man he was a safety kayaker on the Zambezi River and worked for whitewater rafting companies in Victoria Falls. After 9-11, Jon had an illustrious military career with the Royal Marines including multiple deployments into Afghanistan. He was a training officer at the Commando Training Centre Royal Marines including counter-terrorism operations. As a civilian, he has supported science and research trips onto the coral reefs around the British Indian Ocean Territory and the Chagos Archipelago. In 2010, he founded Blue Ventures Belize marine conservation organization operating in Sarteneja and Bacalar Chico. 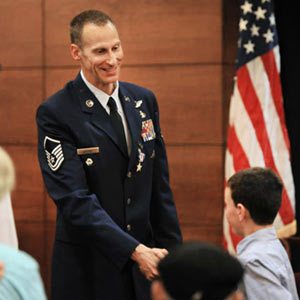 Roger joined the Marines after high school. After several deployments in Iraq as a Reconnaissance Marine, he trained to become a pararescue jumper, or PJ, with Air Force Special Tactics. He received America’s third-highest award for conspicuous valor in combat for his actions during “ Operation Bulldog Bite” in Afghanistan on Nov. 14, 2010. His citation reads: “Despite continued enemy fire and with no concern for his personal safety, Sergeant Sparks immediately performed lifesaving measures for nine wounded soldiers. Roger struggled with post-traumatic stress in the year after that five-month deployment, during which he turned to tattooing. He says: “It’s a metaphysical thing of attempting to master yourself through experiencing the pain of tattooing but through virtuous symbols.” The pastime took on greater meaning as he began tattooing fellow veterans.