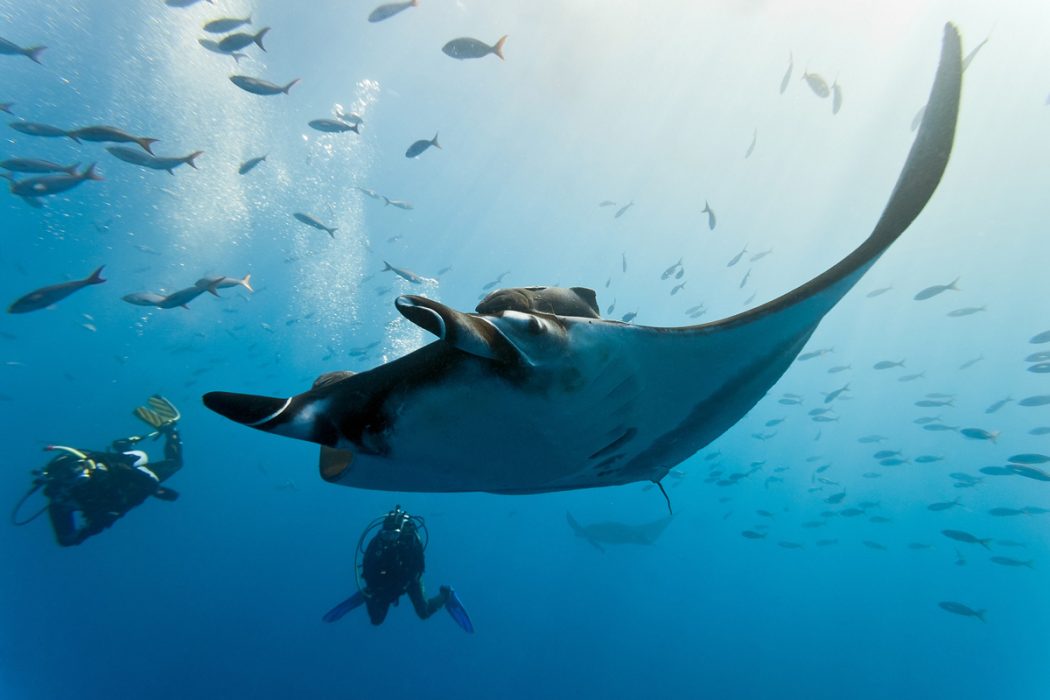 MANTA RAYS ARE LARGE RAYS belonging to the genus Manta. The larger species, M. birostris, reaches 23 feet (7 m) in width while the smaller, M. alfredi, reaches 18 feet (5.5 m). In November of 2011, both species were listed as vulnerable by the International Union for Conservation of Nature (IUCN). Anthropogenic (human impact) threats include pollution, entanglement in fishing nets and direct harvesting for their gill rakers for use in Chinese medicine. M. birostris is not evenly distributed over the oceans but is concentrated in areas that provide the food resources it requires, while M. alfredi has an even tighter range. They are protected in international waters by the Convention on Migratory Species of Wild Animals (CMA), but become more vulnerable closer to shore. Because of their long lifespans and low reproductive rate, overfishing can severely reduce local populations with a small likelihood that individuals from elsewhere will replace them.

In addition to these international initiatives, some countries are taking their own actions. New Zealand has banned the taking of manta rays since the introduction of the Wildlife Act in 1953. In June 1995, the Maldives banned the export of all ray species and their body parts, effectively putting a stop to manta fishing as there had not previously been a fishery for local consumption. The government reinforced this in 2009 with the introduction of two marine protected areas. In the Philippines, the taking of mantas was banned in 1998, overturned in 1999 under pressure from local fishermen and reinstated in 2002. The taking or killing of mantas in Mexican waters was prohibited in 2007. This ban has been difficult to enforce, but laws are being more vigorously applied at Isla Holbox, an island off the Yucatán Peninsula, where manta rays are used to attract tourists. In 2009, Hawaii became the first of the United States to introduce a ban on the killing or capturing of manta rays. Previously, there was no fishery for mantas in the state, but migratory fish that pass the islands are now protected. In 2010, Ecuador introduced a law prohibiting all fishing for manta and other rays, their retention as bycatch and their sale.

In 2014, Indonesia brought in a fishing and export ban as it realized that manta ray tourism is more economically beneficial than allowing the fish to be killed. A dead manta is worth $40 to $500 while manta ray tourism can bring in $1 million during the life of a single manta ray. Indonesia has 2.2 million square miles (5.8 million square kilometers) of ocean and this is now the world’s largest sanctuary for manta rays. Sites at which manta rays congregate attract tourists, and manta viewing generates substantial annual revenue for local communities. Tourist sites also exist in the Bahamas, the Cayman Islands, Spain, the Fiji Islands, Thailand, Indonesia, Hawaii, Western Australia and the Maldives and is worth an estimated $73 million U.S. dollars per year.

With their status as vulnerable, it is imperative to know how these animals reproduce and develop. Recently marine biologist Joshua Stewart saw a baby manta ray while scuba diving in the Gulf of Mexico — a very rare sighting. He and his colleagues analyzed other divers’ juvenile sightings and determined a specific section of the Gulf to be a nursery for oceanic manta rays. After reviewing 25 years of recorded manta data, the records revealed that 95 percent of all oceanic mantas in the sanctuary were juveniles.

The nursery location in the area known as the Flower Garden Banks shows no obvious reason why the juveniles would gather here but the researchers hypothesized that the water is warm enough to bask in after a foraging trip into deeper, chillier waters and far enough from the surface to avoid predators like the bull shark. By locating other nurseries and providing protection to those regions, it is hoped that it can improve the manta ray populations.

To learn more about these threatened animals, visit mantarayworld.com/manta-rays-endangered/ and to read the study about manta nurseries go to link.springer.com/article/10.1007%2Fs00227-018-3364-5.