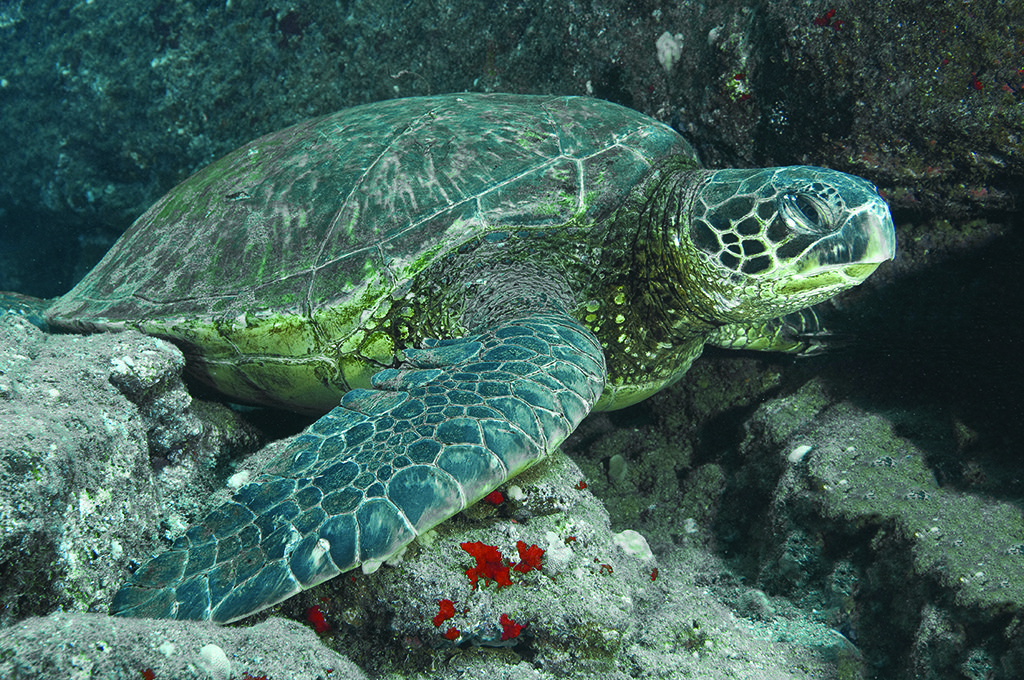 IN MANY RESPECTS THIS PHOTOGRAPH OF A GREEN SEA TURTLE LOOKS LIKE A RELATIVELY SIMPLE IMAGE TO MAKE.

After all, the animal is resting, so as long as I didn’t spook it, you would think I had a very good chance to compose a pleasing frame. And with a wide-angle lens I should be able to easily get the critical elements in sharp focus.

It’s getting a good exposure that can prove tricky in this scenario. Here’s why and what to do about it: The turtle was resting in a cave at a site called Sheraton Caverns just off the Hawaiian island of Kauai. I had very little ambient light to use to help light the shot. The lack of sunlight creates a much bigger exposure challenge than we face when photographing a relatively large animal near the surface in clear water on a sunny day.

In the latter scenario it is relatively easy to use sunlight to help compensate for any exposure deficiency due to insufficient strobe light. But when photographing an animal the size of a relatively large green sea turtle, the exposure and look of the scene is greatly dependent upon the way you use your strobe(s).

When first finding yourself in a setting like this there is a tendency to calculate your exposure simply by estimating the distance from your strobe to the head of the turtle. The result when using this approach is that if the turtle’s head is properly exposed other body parts that are farther away from your strobe will be underexposed. So will the background rocks.

The reason for the underexposure is that light from a strobe dissipates very quickly as it travels through the water column. Thus, it is challenging to pleasingly light the parts of the turtle that are close to your strobe and those that are farther away.

The trick to solving this lighting dilemma is to move your strobe(s) away from your camera. You want the distance between your strobe and camera to be nearly the same as the distance from your strobe to the midbody of the turtle. In this case, I also wanted to position my strobe high enough to avoid overexposing the turtle’s extended front flipper. This technique gives you a good chance to evenly light the turtle’s body parts. And, if the rocks or other elements in the background are close enough to the turtle, you will also be able to cast enough light on them to allow viewers to see more details in the overall scene.

My friend, photo pro Andrew Sallmon, has long been a proponent of this technique. He says a good way to remember it is by keeping in mind that you want “x to equal x.” This means you want your strobe-to-subject distances to be roughly the same as your camera-to-subject distance.