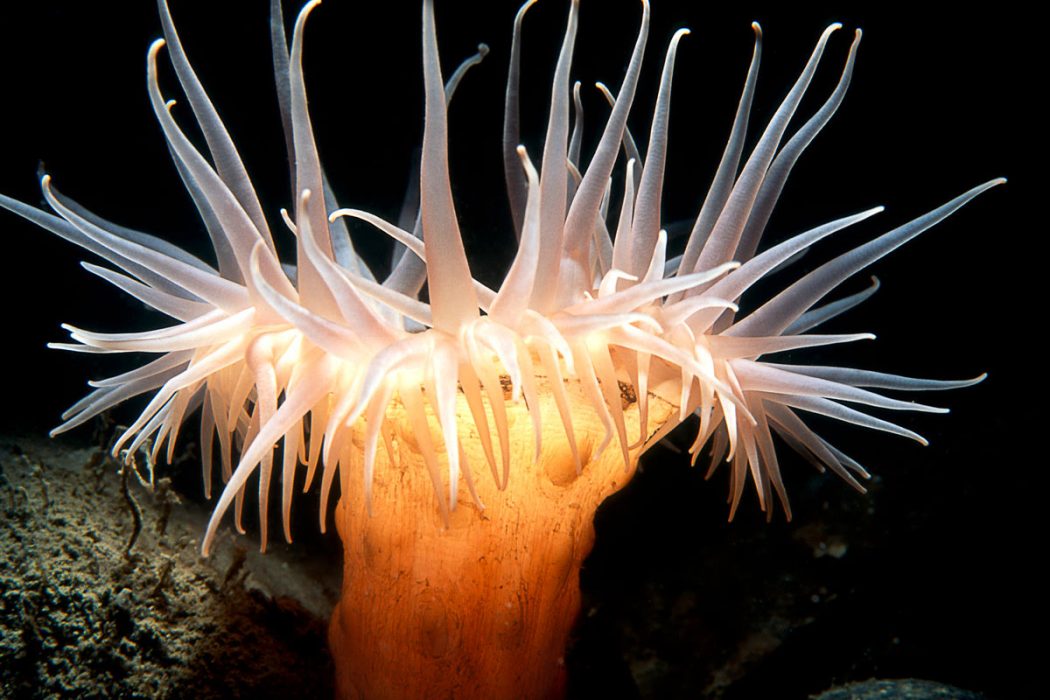 In many respects the ocean is a world in motion. Fishes swarm, circle and move in perfectly synchronized schools. Nomadic populations of bluefin tuna and blue sharks migrate across both the Atlantic and Pacific oceans. In the longest mammal migration known to science, California gray whales spend their summer months feeding in the Bering Sea, the winter months in their breeding and calving grounds in a series of lagoons along the Pacific coast of Baja, and the time in between making the 10,000-mile (16,000-km) round-trip journey between the two. It has recently been learned that some populations of green turtles spend their lives in a state of near perpetual motion as they make as many as three huge loops around the Pacific during their lifetimes.

All of this to find food and ideal habitat, avoid predation, and provide their offspring with the best chance of survival. Even when you look at the animals in a localized reef community, the ocean appears to be a world of constant motion filled with swimmers, drifters, crawlers and even hitchhikers.

But there is yet another set of marine creatures, animals that as adults live in a far more sedentary world, one in which they are, in essence, stuck in one place on the sea floor. A list of these stuck-on-the-bottom creatures includes sponges, corals, anemones, hydroids, bryozoans, barnacles, oysters, and more. Once these creatures settle down from their sometimes free-swimming larval stages, they live the remainder of their lives in one place.

Yet, these animals face the same set of problems and challenges as those that spend their lives in motion. These stuck-in-one-place creatures also need to acquire food and avoid predation long enough to pass their genes along to the next generation. So let’s take a look at the natural history of some of these stuck-on-the-bottom creatures and ways in which they cope with their immobility.

Inhabiting all seas and occurring in a variety of eye-popping colors and shapes that range from free-standing barrels, bowls, tubes, pipes, vases and cups to encrusting species that take on the shape of the substrate they attach to, sponges play an integral role in reef communities all around the world. Lacking specialized tissues, organs and muscles, sponges are the most primitive of all multicellular animals. The cells of sponges are only loosely associated with one another and any contribution of individual cells to an entire sponge is considered a matter of pure coincidence.

The world’s approximately 5,000 species of sponges are the only members of the phylum Porifera, a name that is derived from the system of pores that fill the bodies of sponges.

Sponges exhibit an unusual form of feeding with the basic feeding strategy being designed around their ability to create currents and filter water that flows through a system of tiny pores and canals that permeate their tissues. The outside wall of all sponges is laced with tiny pores. An incoming current created by the constant and frantic-looking beating of numerous, small, hairlike flagella that line the passageways’ walls is pulled through the pores and canals where oxygen and food, mostly bacteria, are extracted from the water.

Soft and immobile, sponges protect themselves with some of the world’s most noxious and powerful poisons. Sponges don’t have to wait until they are bitten or touched to irritate with their toxins; they can release the potent chemicals into the water to deter corals, other sponges, and other animals that try to grow into their space or eat them. In addition, the glasslike shards of silica in the tissues of sponges makes a very uncomfortable mouthful and help inject toxins into the mouths of predators.

As is the case with a number of immobile marine invertebrates, sponges reproduce both by budding and cross-fertilization. When budding, an individual animal creates a clone of itself. An advantage of budding is that no mate is needed. The downside is that with no genetic recombination, a single disease can wipe out an entire population.

In cross-fertilization the genes of different animals combine to create offspring. In sponges, sperm and in some cases eggs are released into the water column in dense clouds. In some cases the eggs are held inside the sponge that receives the sperm. The question is, how does any sponge know how to time the release of its gametes? The answer is in the prerelease of chemicals called pheromones that allow members of the same species to communicate that, “I am ready and willing, how about you?” Thus synchronized spawning of populations of sponges and other immobile invertebrates are coordinated.

Corals, anemones, hydroids and jellyfishes are members of the phylum Cnidaria. While jellyfishes and hydroids such as the Portuguese man-of-war drift about in currents, corals, anemones and sedentary hydroids live their adult lives attached to the substrate or to other plants and animals.

The most significant distinguishing characteristic of all cnidarians is the possession of stinging cells usually concentrated in their tentacles. Incapable of pursuing prey or outdistancing predators, cnidarians rely heavily on their stinging cells both to capture food and for defense, as members of this phylum have evolved the ability to immobilize their prey and their enemies on contact. In addition to capturing prey with their tentacles, corals and some anemones also receive nutrition from the byproducts of the photosynthetic processes of algae that live inside their tissues.

Each individual flowerlike coral animal, known as a polyp, is considered to be an organism, yet with few exceptions the polyps are incapable of surviving outside of a colony. Corals are typically classified in one of two major categories, the stony corals, also called hard or reef-building corals, and soft corals, creatures such as sea fans, sea plumes, sea rods and sea whips that add considerable beauty to reefs around the world, but whose skeletons do not significantly contribute to the foundation and growth of living reefs by adding limestone.

Hard corals require water temperatures that are 68 degrees Fahrenheit (20 degrees Celsius) or higher. In tropical seas almost everything that you might want to describe as a solid, ornate rock is probably a hard coral. In contrast, colonies of soft coral often appear flexible and sway back and forth in currents and surge.

Sea anemones are among the most delicate and attractive of all reef invertebrates. Lacking a hard skeleton, their flexible bodies tend to flow back and forth with the surge. The body plan of anemones consists of a ring of tentacles laced with stinging cells that are connected to a circular disc. The mouth is in the center of the disc. Most anemones also have a body stalk, but it is often blocked from a diver’s view. While mostly immobile, adult anemones can creep along at an almost imperceptible rate.

Some hydroids are colonial and often look like a feathery bush, while others are the size of a small coin and solitary. Most go unnoticed even by seasoned divers, but whether conspicuous or not, any diver who comes in contact with their potent stinging tentacles is unlikely to forget the pain of the experience.

The world’s approximately 5,000 living species of bryozoans are obscure creatures, and more often than not go unnoticed by divers. Yet, one species, Schizoporella floridana, literally built much of south Florida with its calcite skeletons. Bryozoans are small colonial animals that attach themselves to reefs, sargassum weed and kelp. They bear some resemblance to moss and, in fact, the name bryozoan is derived from the Greek for “moss” and “animals.”

Occurring mostly in hues of pink, tan, white, brown, orange and beige, colonies of bryozoans range in size from that of a large coin to the size of a basketball. Many species look like delicate lacy corals and others like groups of marine worms. An individual colony is often composed of thousands of individual animals all contained within a skeletal network.

Each animal in a colony is known as a zooid. Within a colony individual zooids are specialized to perform specific functions. Those animals that provide defense are equipped with jaws that enable them to bite intruding organisms. Others possess a featherlike, food-trapping organ known as a lophophore that filters the water.

Bryozoans simultaneously possess both male and female reproductive organs. In some species sperm and eggs are produced concurrently, while the cycle of production alternates in others. In some species, free-swimming larvae are left to defend for themselves, while in others the fertilized eggs are held within the colony in a specific brooding area.

Although they superficially appear to resemble mollusks, barnacles are members of the phylum Arthropoda. A segmented body that is jointed is a key characteristic of arthropods, and barnacles definitely display these characteristics, although only in their larval stage.

Barnacles are filter feeders that are often found in areas where there is considerable tidal exchange or current flow. When feeding, barnacles extend their feathery feet called cirri from their volcanic-looking shells to filter tiny, planktonic food from the water. When the water is slack and barnacles are not feeding, they often seal themselves inside of their calcerous “door” called an operculum. This is especially critical for barnacles that are exposed at high tide so these animals can prevent desiccation.

Worldwide there are about 1,000 species of barnacles. As adults, most species attach to rocks or other fixed surfaces using a strong byssal thread and self-made glue. Myriad species of barnacles grow in crowded colonies on rocks, piers, boat hulls and even on the shells of other animals including crustaceans, mollusks and whales. Here the barnacles gain access to food that passes by in the water column.

The presence of adult barnacles attracts barnacle larvae to existing settlement sites, thereby increasing the probability of finding a mate and a favorable place to settle. As is the case with other animals that live in one place as adults, gaining access to a mate and being able to reproduce pose interesting challenges. Barnacles overcome their immobility by possessing the world’s largest penises with respect to the animals’ penis-to-body size ratio. When mating, this long organ is extended to transfer sperm to a receptive neighbor. Each animal is simultaneously male and female, but self-fertilization is rare. Fertilized eggs develop and hatch within the recipient’s shell where their eggs are brooded for a short time before being released into the planktonic community where they undergo a series of metamorphoses before settling to the sea floor.

Other invertebrates that live their lives attached to the substrate and to other organisms and in permanent locations include a variety of mollusks such as mussels, oysters and some scallops as well as creatures such as tubeworms that inhabit self-made tubes consisting of mucus and debris.