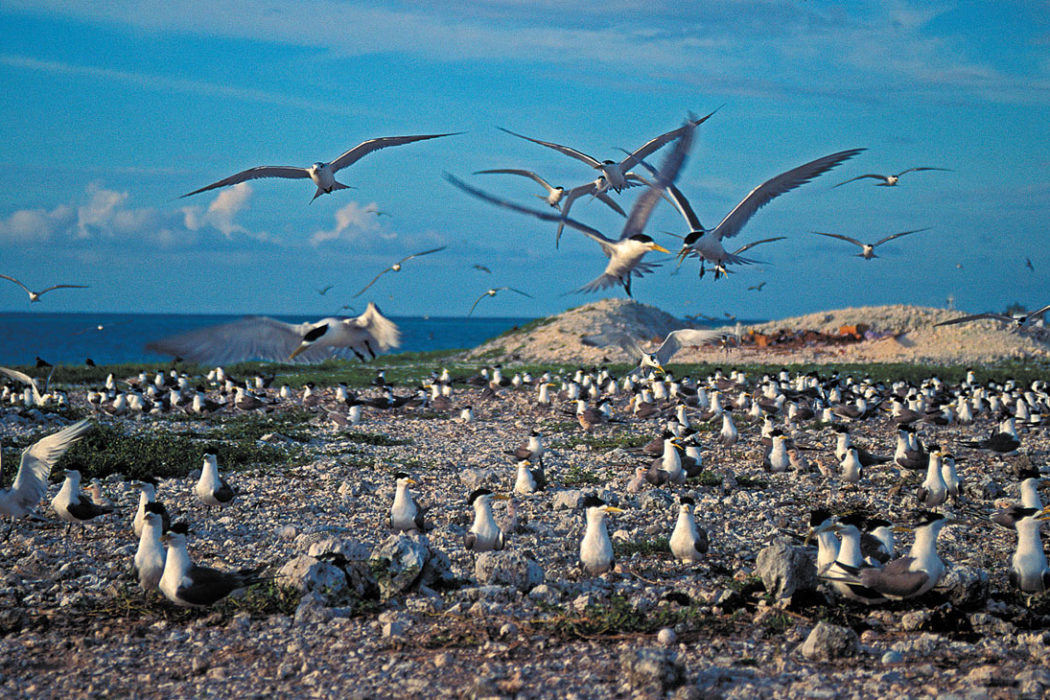 Ancient mariners always kept a close eye out for seabirds as harbingers of terra firma. Fishermen, too, have used them for years to help find their targeted catch. For thousands of years seabird eggs have been important sources of food for coastal peoples around the globe.

As divers, seabirds help us find submerged reefs and schooling fishes, rafts of floating seaweed and activity in the ocean. We marvel at their beauty, grace and ability to effortlessly soar above us as they simultaneously entertain and astonish us with aerodynamic displays and subaquatic skills.

Seabirds are a group of about 250-300 species of birds that live either partially or almost exclusively at sea. Some of the more familiar families of seabirds include the approximately 50 species of sea gulls, pelicans, penguins, petrels — Wilson’s storm-petrel is perhaps the world’s most abundant seabird — frigates, boobies and terns. Ornithologists list 15 families of marine birds with the number of species continually being revised.

Seabirds comprise only 3 percent of the world’s approximately 9,700 bird species. The remaining 97 percent live on and over the land that covers just 30 percent of our planet, as the world’s oceans comprise roughly 70 percent of the Earth’s surface. Many ornithologists speculate that this statistical disparity in the number of seabird species compared with land birds is probably because many of the niches similar to those filled by birds on land are taken care of by a variety of fishes in the marine environment.

What Distinguishes a Seabird?

While the terms “marine birds” and “seabirds” are often bandied about in conversations among divers and other laymen, it is important to understand that there are no strict scientific definitions of the terms “marine bird” or “seabird.” In short, there is no one defining trait or behavior such as how many toes the birds have, where they feed or what they feed on, when or where they breed and nest, whether they are colonial breeders, or even whether they can fly that clearly distinguishes seabirds from land birds.

Consider for example, where some birds feed. Many species that are routinely called seabirds, such as albatrosses, auks, frigate birds, gannets, penguins, petrels and storm-petrels feed exclusively at sea. Those seabirds known as types of grebes, cormorants, jaegers, loons, pelicans and terns feed either entirely or mainly at sea. However, ducks and grebes that feed at sea are generally not considered seabirds. Neither are the birds known as phalaropes, a family of shorebirds that feed at sea. Most birds that feed at sea prey primarily on small fishes and small animals collectively known as zooplankton, a grouping that includes many species of squids and crabs.

While it is clear that seabirds play integral roles in marine ecosystems, seabirds somehow seem to be perceived in a light different from sea creatures such as whales, seals, manta rays and sharks. This is probably because seabirds spend significant amounts of time flying in the air above the water’s surface, resting on the surface, or at rest on rocks or in bushes and trees on land. As a result of these and perhaps other factors there seems to be a distinction in the minds of many people between the animals we think of as marine creatures and the birds we refer to as seabirds. But no matter what the perception, seabirds do derive their food from the sea and there can be no doubt that these birds play integral roles in marine food chains. 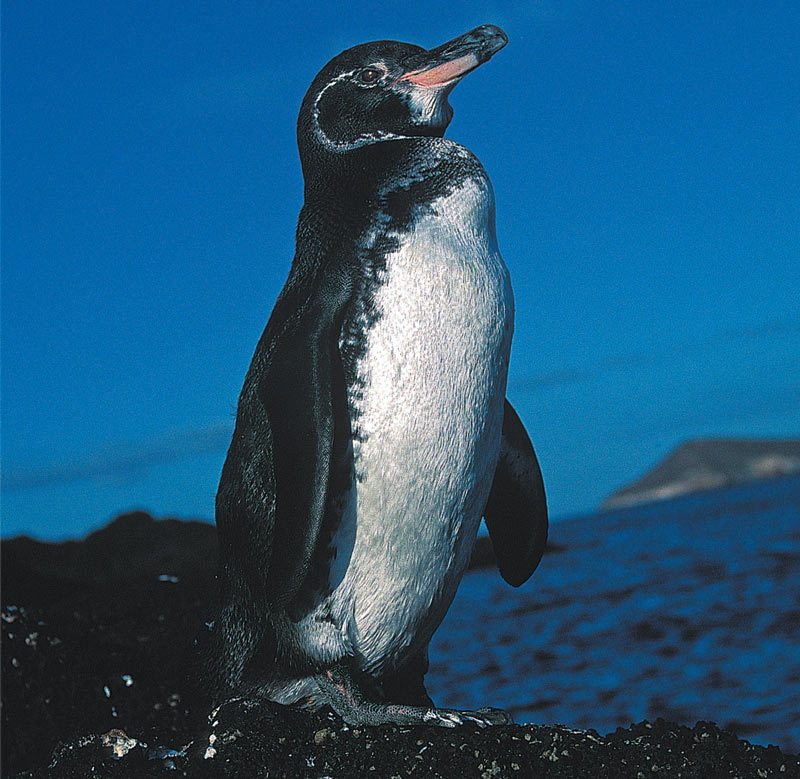 Penguins chase prey below the surface using their wings for propulsion. Photo by Marty Snyderman.

In Pursuit of Prey

The majority of seabirds prey upon either a variety of small fishes or zooplankton, mostly crustaceans, some squids and other shelled organisms. Seabirds tend to be generalists when they feed, readily consuming a variety of different types and sizes of prey. However, the rules tend to change when the birds are rearing chicks, as the adults become far more selective in the prey they capture and later regurgitate to feed their offspring.

Superb aerialists, seabirds such as storm-petrels, terns and jaegers feed at the sea surface as they capture their prey while remaining in flight. Others such as phalaropes and kittiwakes feed while sitting on the surface. Still other species such as penguins, auks and shearwaters chase prey below the surface using their wings for propulsion. Cormorants and loons use their feet to drive them forward underwater while in pursuit of prey. These diving seabirds are often called “pursuit divers.”

Gannets, boobies, pelicans, terns and others use the force derived from plummeting vertically through the air into the sea to propel them underwater in the pursuit of prey. Gannets begin their aerial dives from as high as 150 feet (50 m) above the surface and go as deep as 50 feet (15 m) to snag a meal.

Among the best fliers, frigate birds are amazingly adept at swooping down and plucking a fish off the surface, but they are just as likely to engage in aerial combat with other birds in order to steal their freshly caught meal.

Frigate birds, like their close relatives the pelicans, are known for their well-developed gular, or throat, pouch. The pouch is used to hold food and when inflated, in the case of male frigate birds, to attract mates.

The deepest diving seabird is Antarctica’s emperor penguin, one of 17 members of the family of flightless birds and an amazingly adept swimmer that routinely reaches a depth of 110 feet (33 m) during dives that last as long as 10 minutes. Weighing as little as 2.2 pounds (1 kg), murres are considerably smaller birds, but they can dive nearly 40 feet (12 m) deep while remaining submerged for up to three minutes.

Albatrosses, petrels and storm-petrels are sometimes called “tubenoses” because their tubular nostrils are external. There is plenty of evidence to suggest that these birds use their sense of smell to spot food from considerable distances.

Seabirds must sometimes travel great distances to find a meal. With the great variation in food supply, seabirds have adapted to “feast or famine” conditions; they gorge themselves when food is plentiful and are able to conserve energy to survive lean times.

Seabirds are considerably more numerous in polar waters than in tropical waters, and there are far more species (greater diversity) in the Southern Hemisphere than in the Northern Hemisphere. The most widely accepted belief about the diversity disparity is that a much higher percentage of the Southern Hemisphere consists of ocean. At any given time the distribution of seabirds tends to be greatly affected by local factors such as water temperature, ocean currents, weather and the abundance of food.

However, in the Northern Hemisphere one of the areas that is known for great diversity is the Atlantic isle of Newfoundland, Canada. There, at the edge of the Grand Banks, the cold, nutrient-rich waters of the southward-flowing Labrador Current converge with the warm, northward-flowing waters of the Gulf Stream, producing some of the world’s most fertile seas. Thus it comes as no surprise that seabird populations are abundant and diverse. On the Grand Banks, large populations of murres, Atlantic puffins and other seabirds that breed in the Arctic and subarctic mingle with shearwaters, gannets, storm-petrels and other species that breed in more temperate areas.

Generally speaking, seabirds that feed underwater, such as penguins and auks, are much more common in polar seas than in tropical seas. It is theorized that the number of seabirds that feed underwater in the tropics is small due to the threat from and competition with numerous large fishes. In contrast, surface feeders such as petrels and terns thrive in tropical climes.

As is the case with fishes such as tunas and billfishes and many species of whales, many seabirds undertake long, seasonal migrations. The longest migration in the bird world is claimed by the diminutive Arctic Tern. Each year thousands of these superb fliers travel from within the Arctic Circle in tundra regions to the edge of the Antarctic ice pack, a roundtrip distance of 21,750 miles (34,800 km). With a life span of about 20 years, these masters of the air spend most of their lives in flight. 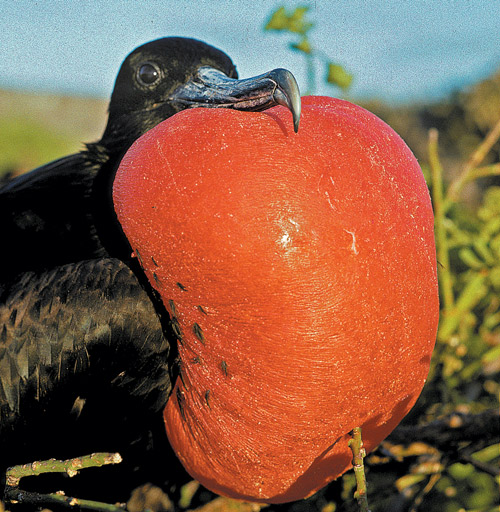 This male frigate bird inflates his gulag, or throat, pouch in hopes of attracting a mate. When not courting females, the male frigate uses his gulag pouch to hold foot. Photo by Marty Snyderman.

As is the case with so many marine species, things aren’t going so well in the world of seabirds. About 20 percent of seabird species are threatened, a figure that is significantly higher than the 12 percent figure for all bird species. In recent centuries seabird populations have had to cope with mankind’s intrusion into coastal nesting grounds and the introduction of mammalian predators to many key breeding areas. In addition, in recent years pressure on seabirds has been greatly increased by the degradation of the world’s oceans. The introduction of heavy metals and plastics, as well as pollution from oil and other toxins, have taken a toll on seabird populations.

While pelagic seabirds live relatively long lives in idyllic natural settings, as a general rule females lay only one egg every year or two, and in many species the birds do not breed until they are 7-11 years old. But despite living longer than most land birds, many seabirds have far lower reproductive rates than most land birds as land birds tend to lay larger and more frequent clutches of eggs.

Additionally, in scenarios where seabirds are highly dependent upon a particular food source to feed themselves and/or their chicks, disruption in food supply due to human involvement poses potentially serious problems for numerous species of seabirds. This combination of factors does not bode well for many types of seabirds.

As divers we usually do not pay as much attention to seabirds as we do to fishes and other marine creatures, but seabirds play important roles in life in the oceans. The next time you’re at a dive site frequented by seabirds, look up and around you, and you might find some interesting seabird species — by air and by sea.

At Begg Rock off San Nicolas Island, one of California’s eight Channel Islands, I was diving along a ridge of rocks known as the razorback at a depth of just over 130 feet (40 m). I was hoping to photograph a vermillion rockfish when I looked up only to see what I was certain was a bird known as a cormorant go cruising past me and continue downward. At least I thought it was a bird. I mean, I was pretty sure I saw a bird, but I was more than 100 feet ( 30 m) deep and this creature blew by me as if it didn’t have a care in the world. I checked my depth gauge and wondered if nitrogen narcosis was causing my mind to play tricks on me, and I slowly started to ascend. All the while I continued to keep an eye out for another glimpse of this birdlike creature.

A minute or so later the cormorant swam upward, coming so close to me that not only could I easily identify the bird but I could also see a small fish dangling from its mouth. Back on the boat I didn’t say a word until one of my diving pals who was braver than I spoke up and sheepishly asked if anyone else thought they saw a bird at a depth of just over 100 feet. For a moment I thought about holding out and joining in the growing ridicule just to watch my friend squirm, but I soon chimed in saying that I, too, had seen a cormorant chasing its lunch at depths much deeper than anyone on board knew cormorants could dive.