The photo shown here presented me with several challenges that serve as an excellent teaching tool. The two biggest challenges were composing a pleasing shot while dealing with two subjects and acquiring a proper exposure when important elements in the frame pushed the exposure latitude limits of my camera’s sensor. 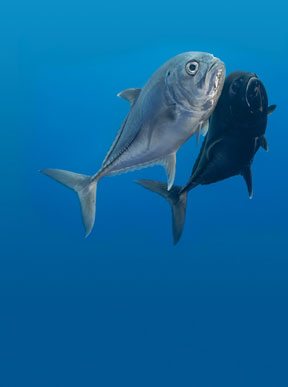 Here is how I dealt with those issues: When composing a shot with two subjects it is very easy to fall into the trap of unintentionally splitting your frame in half. Do that, and the viewer is not sure where to look, as their eyes and their attention tend to uncomfortably move back and forth from one subject to the other. As a result, viewers have no way to know what feelings and thoughts you want to convey through your photograph.

That said, it is possible to create very pleasing images that include a pair of subjects. The key to success is that the two subjects appear to be interacting with each other or relating to each other in some easily seen way. Examples include predator and prey, photographer and subject, mother and calf, courtship and mating, an animal laying or tending to eggs, or a pair of fish swimming side by side. What usually won’t work is having two subjects looking or swimming in opposite directions while appearing to do unrelated things.

Many years ago, the legendary underwater photography guru Jim Church taught me that it usually adds an element of tension to a photograph when two subjects face each other in the same frame (consider a photographer and an oncoming whale), and that viewers feel a sense that all is right with the world when two subjects are swimming parallel to each other. Jim’s insights are worth noting.

The pair of bigeye trevally shown here is involved in courtship. Taking the lower position during courtship, the male is the darker animal. Bigeye trevally often gather in large schools, but they pair off and swim away from the school during courtship and mating. Even if viewers do not know the natural history, it is easy for them see that the fish are interacting in some way, and their side-by-side swimming creates an ambiance that says the fish are in harmony.

With regard to exposure, it is always challenging to include two important elements in a frame when one is very dark and another is very lightly hued. Avoid severely overexposing the lightly hued element and bring out whatever detail you can in the dark element using post-capture software. Modern-day digital technology gives us the option.