I often hear people talk about “taking photographs,” and while I understand the expression, I think the verbiage often sells photographers short. I prefer to think that experienced photographers more commonly make, or create, photographs instead of more simply recording what is in front of them at any given moment. Good shooters analyze as many factors as possible as quickly as they can, and then position themselves to take advantage of the factors that work in their favor while minimizing the effect of the factors that work against their success. 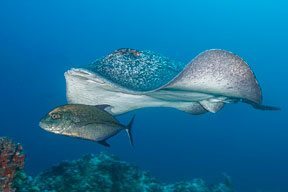 These comments are especially true when working with fast-moving subjects. The photograph of a jack commonly known as a bluefin trevally accompanying a marbled stingray at Cocos Island provides an excellent example of a photograph that was made rather than taken.

Here are some factors I considered and things I did to create the photograph. Upon composing my original frame I realized I was shooting toward a dark reef behind the ray. I felt certain that the dark upper body of the ray would blend into the dark reef if I shot in that direction, so I changed my location to frame the jack and ray against blue water as opposed to dark reef. Once in position I made sure to take an accurate light meter reading on the blue water surrounding my subjects.

The disc-shaped bodies of rays can make them difficult to recognize in photographs. Knowing this, I wanted to capture the ray’s undulating movement to make it easy for viewers to recognize the stingray and to show motion.

Three additional considerations came into play. One, I knew the jack’s position relative to the ray would be a key factor in pleasing composition. I wanted to be sure I tripped the shutter when the jack was completely visible to the viewer. Two, because my subjects were on the move, I wanted to include some empty space in front of them (headroom) in the frame to give them “room to swim” as opposed to putting the jack’s mouth on the edge of the frame. Three, when moving into shooting position I wanted to avoid getting directly in front of the duo, a position that would almost surely cause both animals to change course. So, I swam parallel to the direction my subjects were swimming.

Clearly, there are many factors to consider when composing a pleasing shot. It’s the difference between “taking it” and really “making it.”