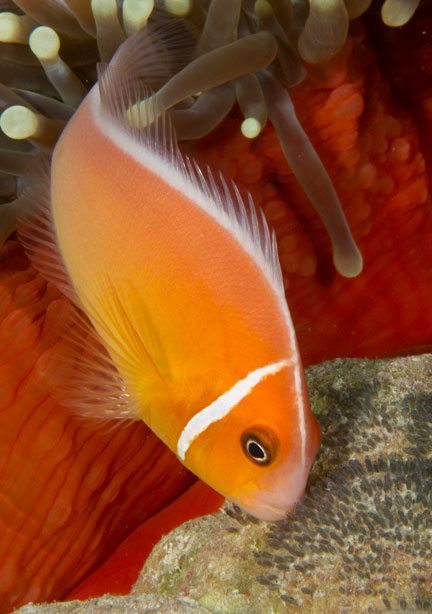 I’ve spent a lot of time on Indo-Pacific reefs where a variety of anemonefish abound.

So it would be perfectly logical to me if you were to think that long ago I created my last-ever photograph of an anemonefish. But that is not the case. In fact, on a recent trip to the Micronesian island of Yap I shot around 1,000 frames of anemonefish.

Many of those images were relatively simple portraits. That’s because I still find anemonefish to be a combination of adorable and irresistible. But over the years I have learned that anemonefish often provide opportunities to capture strong behavioral images as well. So every time I stop to create portraits, I take some additional time to watch and look for other opportunities, such as an anemonefish getting cleaned by a shrimp, an anemonefish chasing another creature away from “its” host anemone or for anemonefish tending their eggs.

Most of the time I don’t see photographic opportunities other than portraits, but I still take the time to look. And the accompanying photograph of a pink anemonefish tending its eggs provides a classic example of why I take that time every time.

I had actually photographed the same anemone with a handful of pink anemonefish the day before. But that day I had a lens that was too wide to create a frame that was as tight as I wanted. So I requested the opportunity to dive the same site again the next day. Request granted, I mounted a macro lens on my camera and went in search of the anemone. Fortunately, I was able to find it in a matter of minutes.

My original intent was simply to create a color-filled shot of the orange fish framed against the bright red mantle of the anemone. A shot like that with the fish in an appealing pose had strong possibilities. But before I composed my frame I took a few minutes to look around. And I sure am glad I did, as I discovered a freshly laid cluster of eggs. Those eggs were definitely not there the previous day.

I immediately went to Plan B or, perhaps more appropriately described, to Plan A+. I know that when eggs are present, and especially when then they are exposed as they were on this day with the current pushing the anemone’s mantle upward, anemonefish closely guard and tend their eggs. So the shot I concentrated on first was the one seen here of an anemonefish tending its eggs. Only after I was confident that I had several nice shots of that behavior did I revert to my original plan and shoot a few portraits.

Over the years I have found that like most serious underwater photographers, I usually produce my better work when I enter the water with a photographic dive plan and the corresponding equipment. But I try not to have tunnel vision and fail to take advantage of unexpected opportunities. And it is that looking around and keeping my eyes wide open for other opportunities that allowed me to capture the featured photograph.