The yellow tang is one of the more commonly encountered reef fish in Hawaii and many other parts of the tropical Western Pacific. On many dives yellow tang are too numerous to count.

These brightly colored fish quickly get the attention of underwater photographers the first few times we dive in areas where the yellow tang are common. But after a few dives many of us soon begin to swim right past them without giving them a second look. That’s because we seek something “better” or less common. 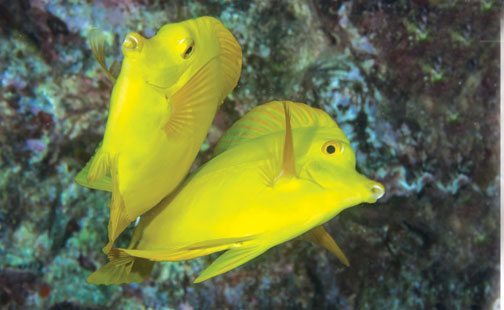 But swimming past the ordinary can be a mistake. Sometimes the ordinary behave in ways that are anything but.

That is exactly what happened to me on the dive when I created this photograph of a courting pair of yellow tang off the Hawaiian island of Lanai. I was exiting a rather large lava tube when I saw one yellow tang quickly approach another. The pair circled each other at close range and soon appeared to rub bellies. At first I thought I was watching territorial males battle it out in a turf war, but within a few seconds I recognized the behavior to be part of a courtship ritual.

In an ideal scenario I would have selected the perfect lens and camera system setup, but in real life sometimes you have to take the camera system you have at the time and make the best photograph you can.

The takeaway message here is that when it comes to capturing animal behavior, especially behavior you are not overly familiar with, there might not be much time to waste. In this case, I had no idea how long the pair would court, or if they would mate. So I started composing and shooting. At the same time, I was careful not to charge at the fish because I wanted to avoid interrupting their interlude.

Another element in my strategy was to slightly underexpose the shot. That’s because the bodies of bright yellow fish often reflect so much light that the “yellow parts” get grossly overexposed.

Capturing behavior is special to me, so I was going to stay with the fish as long as the behavior or my air lasted. To my surprise the courtship went on in a series of encounters for at least 30 minutes, and I shot at least 50 frames of the courting pair. But the fish moved quickly when they were near one another, and I knew a lot of my shots were useless “near-misses.”

After the dive I was talking with several other divers on the boat, and they said they saw me photographing yellow tangs. They thought it was funny that an experienced photographer was doing that. After all, they said, “Yellow tangs are as common as dirt.” Except that sometimes when you dig in the dirt you hit gold.