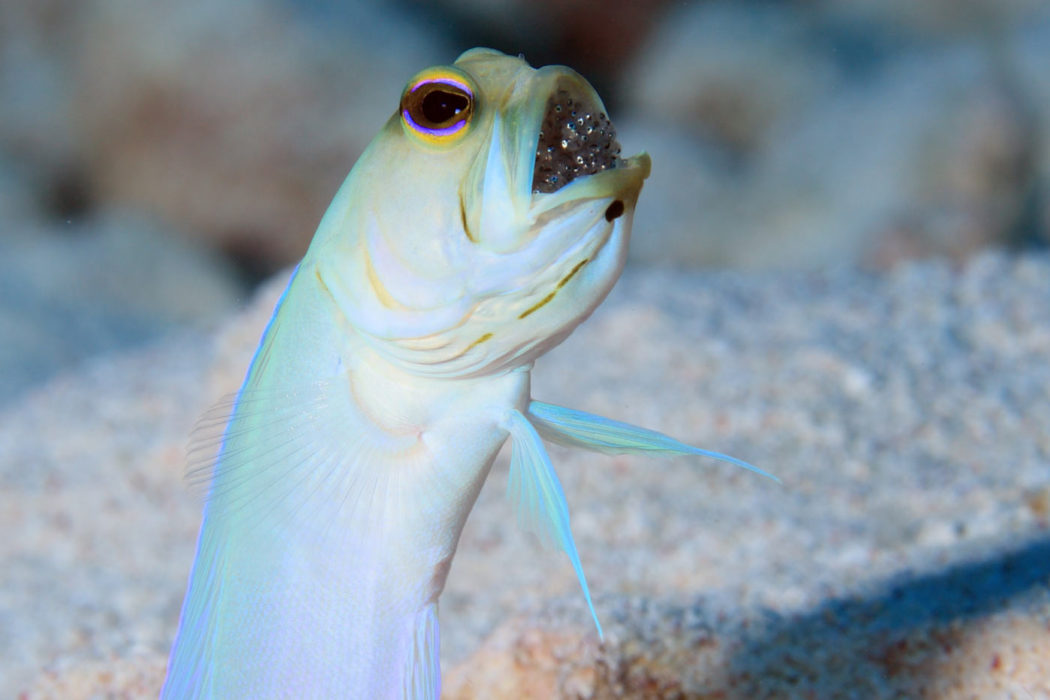 Birds do it. Bees do it. So do fishes. All compete for mates, court, mate and reproduce. Perhaps surprising to many divers, the game of love is as fascinating — and perhaps as complicated — in the world of fishes as it is in the lives of humans. In this real-life game, strategies vary greatly, but the self-serving goal is always the same, and that is for each fish to pass its genetic code to the next generation.

The success of sufficient numbers of members of each species helps ensure that their species will flourish, but survival of the species is not the biological goal of a fish that seeks a mate. In short, the game of love is all about me, me, me, and my genes!

As everyone that dives soon learns, the world of fishes is extraordinarily diverse. And when it comes to courtship, mating and reproduction, diversity rules. Fishes employ a variety of reproductive strategies to maximize the odds that each will pass its genes along to future generations.

How They Do It

There are two classes of fishes that sport divers are likely to encounter. All sharks, rays and skates, a group known as the cartilaginous fishes because their skeletons are composed of cartilage, are described in the class Chondrichthyes. Groupers, snappers, angelfishes, damselfishes, anemonefishes, tunas, jacks, and all other fishes that sport divers typically encounter in either fresh or salt water possess skeletons made of bone, and they are described in the class Osteichthyes.

In cartilaginous fishes males and females copulate, and fertilization of eggs occurs inside the female’s body with females only producing a few eggs at a time. With only a few eggs giving the female a chance to pass her genes along to the next generation, she must choose her mate wisely. This usually means the largest, strongest, most powerful male is her best choice.

For male sharks, the more females a male can successfully mate with, the better his chances to pass along his genetic code.

In most bony fishes sperm and eggs are released into the water column where, if successful, fertilization occurs in a reproductive activity known as spawning. In many cases thousands of eggs are produced at one time, and in some cases the number of eggs approaches 1 million. In other instances eggs are laid in a nest or cared for in some way by at least one of the parents. Once fertilized, fish eggs can hatch as soon as one day in some warm-water fishes and up to several months in cold-water species. In still other species of bony fishes such as guppies and rockfishes, females retain their eggs inside their bodies and accept sperm from males. The young hatch inside the mother’s body and are soon released into the water.

But the diversity doesn’t end here. Species such as blue sharks and Caribbean reef sharks bear live young that look like miniature adults. Other sharks such as horn sharks, Port Jackson sharks and swell sharks are egg-layers. On the other end of the spectrum, a tiger shark embryo receives some nutrition directly from the body of the mother the way a human embryo receives nutrition via an umbilical cord. In the great white, sandtiger, mako shark and a few other sharks the male fertilizes the eggs inside of a female’s body, but when the eggs hatch inside of the female, the young are not born, or released into the wild. Instead, one young shark from each of the two separated uteri devours the unhatched eggs of its would-be brothers and sisters inside of the mother’s body. After some time has passed, and when no more food from other eggs is available, one pup is born from each uterine canal.

When compared with many species of bony fishes, sharks, at least the mother, invest more energy into parenting their young.

By comparison, bony fishes that spawn simply create sperm and eggs, and then cast the fate of their offspring to chance. For these species, reproduction is a game of numbers with little investment other than what is required to create sperm and eggs. However, spawning is an activity that often attracts predators, so reproduction comes with a risk.

The majority of coral reef fishes are bottom-dwelling species that reproduce by spawning. Ichthyologists know these fishes as pelagic, or broadcast, spawners. Sometimes gathering only with other members of their species, and sometimes with as many as 30 or more species collecting around a prominent outcropping or coral head, each female will broadcast as many as 50,000 eggs into the water column during an hour or so, with this number varying by species and the size and health of the female. Males release their sperm hoping to fertilize as many eggs as possible.

In some species spawning occurs throughout the day, in others at sunrise and/or sunset, and in still other species the spawning is timed so that currents are more likely to carry the eggs, sperm and fertilized eggs away from the reef and potential predators. Nassau groupers (Epinephelus striatus) are known to travel as far as 149 miles (238 km) to reach an established spawning site, while smaller wrasses routinely go as far as 0.93 miles (1.5 km).

The fertilized eggs become part of the community of plankton and disperse as they drift away from the reef in open water. This period varies by species from a day to longer than one year. Best estimates conclude that about only 1 percent of the spawned eggs survive the challenges of their pelagic life as unhatched eggs and as larval fishes to settle onto a reef. But successfully settling out of the water column onto a reef does not mean the gamut has been run. Indeed, it is believed that close to 90 percent of the larval fishes that make it to the reef do not survive the next 24 hours. Those that survive the first day must undergo a metamorphosis in which they transform into juveniles, but only about one-half of those individuals that begin metamorphosis live long enough to complete the transformation. However, once the young fishes take on the morphology, appearance and behavior of a juvenile, their mortality rate decreases greatly.

Roughly 20 percent to 30 percent of coral reef fishes, a group including damselfishes, anemonefishes, gobies and triggerfishes, deposit eggs in nests. The approximately 1-mm-long eggs stick to the substrate until they hatch in what is usually a period of only one to four days.

In damselfishes the male clears an area of debris and builds a nest. He then performs a series of in-water loops swimming in an attention-getting manner to try to persuade a number of females to lay their eggs in his nest. In some damselfishes such as the bicolor damselfish (Stegastes partitus), the females tend to choose the male that does the largest number of dips in a given period during his courtship dance as this presumably enables the female to evaluate the health and fitness of her potential egg-guarding partners. In other words, she is considering, although perhaps not consciously, how to maximize her chance to pass her genes to the next generation.

In the garibaldi, a temperate-water damselfish found in Southern California, the females respond to the low-frequency sounds the males make when they vibrate their swim bladder to impress the ladies. The larger the male, the more low-frequency the sound, the better the odds of being the chosen male, and the female gets a large partner to protect her eggs.

It Gets More Complicated

The fishes called hamlets are probably the best-known simultaneous (also known as synchronous) hermaphrodites among coral reef fishes. Monogamous for a breeding season, hamlets form faithful mating pairs with each fish taking on the role of male and

female at different times. During courtship one fish will “act male,” releasing sperm while its mate “acts female” and releases eggs during a spawning event. Within minutes the pair reverse roles, with the first “male” now acting as a “female” and releasing eggs while the first “female” plays the male role and releases sperm. This ritual is repeated until the exhausted fish are incapable of mating with another fish.

Anemonefishes are perhaps the best-known protandrous hermaphrodites, with every anemonefish beginning its adult life as a male. In a clownfish community a hierarchy exists in which the largest fish is an adult female, and the second-largest an adult male. All remaining fish are undifferentiated juveniles. If the largest female is removed from the population, the largest male transforms into a breeding female, and the undifferentiated juvenile that was third in line changes into a breeding male.

Beginning adult life as a female is far more common in reef fishes, with the best-known protogynous sex-changers being wrasses and parrotfishes. But even within these families the sexual systems and the timing of the change from female to breeding male differ considerably. The wrasse known as the common cleaner fish that is found on Australia’s Great Barrier Reef provides only one of a great variety of interesting examples. Common cleaner wrasse live in a small social group that consists of about 10 fish. Within the group there is one dominant male and several breeding females that exist in a hierarchy. If the breeding male is removed from the population, the most dominant female quickly assumes the role of the dominant male and within two weeks time the fish’s color patterns change to that of the male and the transformation to male is completed. This strategy ensures that the most dominant fish in the group, the breeding male, supplies 50 percent of the genetic code that is passed on to the next generation.

The reproductive lives of fishes are both diverse and fascinating. Knowing about some of the many methods involved in wooing a mate and in reproduction will help you understand the activities of various fishes you encounter. Ultimately, the more you understand about the marvels of the underwater world, the more you will appreciate your diving experiences.

Many fishes, males are what in human terms would be called playboys. They court, mate and leave the scene. But clearly that is not the case with nest-guarding species such as damselfishes and triggerfishes. Male jawfishes take the egg-guarding responsibilities to an even higher level as they protect the fertilized eggs produced by their mates by holding the eggs in their mouths until the embryos hatch.

Male sea horses and pipefishes guard the fertilized eggs of their mate by holding them in a protective sac on their midsection, known as a brood pouch, while male sea dragons “glue” their eggs to their midsection until they hatch.

Thus, in the natural world where mothers generally expend far more energy producing eggs as opposed to sperm, and in protecting and rearing offspring, these fishes have earned the moniker of Mr. Mom.

Dominance Can Be Deadly

In some species of wrasses and parrotfishes, the dominant male attempts to be the only male that breeds with members of “his” harem. The dominant male expends great amounts of energy both wooing females and trying to ward off other males. However, the cost of being the dominant male is high. He exhausts himself attempting to mate so often while preventing other smaller males — known as “streakers” — from mating with members of his harem. This makes him an easy mark for predators.