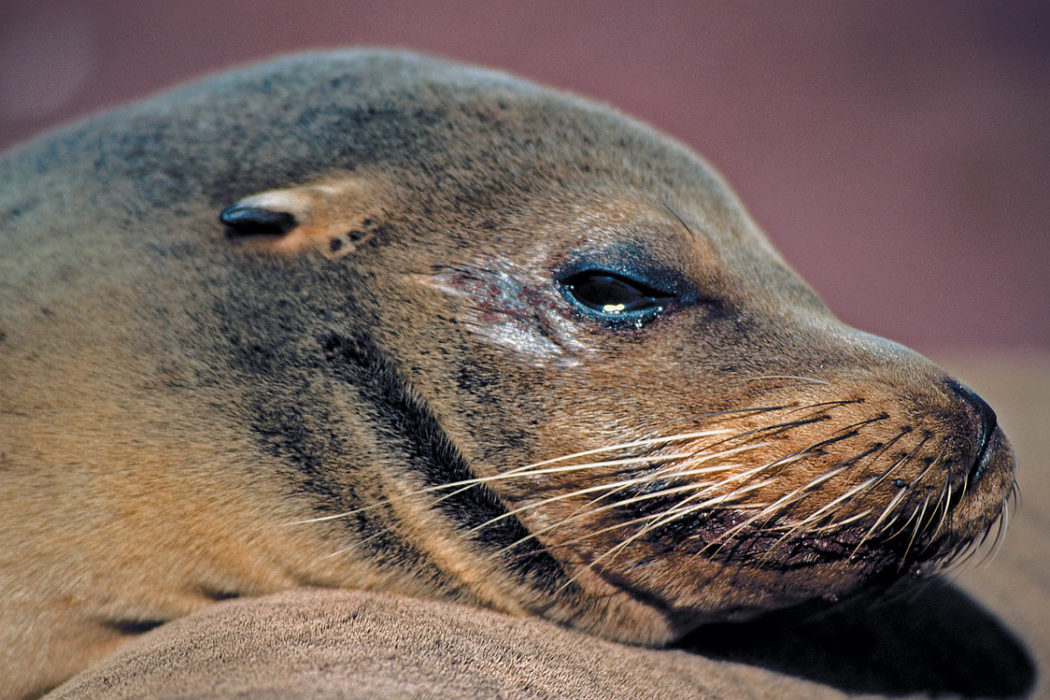 Studies show that seals and sea lions can use their whiskers to detect the water trail created by a swimming fish. Photo by Marty Snyderman.

Beards. Mustaches. Whiskers. In human males facial hair is used to enhance one’s appearance, intimidate, add stature, set one apart from the crowd and perhaps to help attract a mate. Throughout the ages, men like Socrates, Abraham Lincoln, Wyatt Earp and the members of ZZ Top have worn distinctive styles of facial hair to distinguish themselves.

But what about the whiskers, barbels and other appendages that resemble human facial hair found on seals, sea lions, manatees, walruses, bony fishes such as catfishes, goatfishes, toadfishes, stonefishes, scorpionfishes and a variety of bottom-dwelling sharks? Often described in terms associated with facial hair, these features play important roles in the lives of several marine creatures. Let’s take a look at some of these marine creatures and examine how they use their whiskers, barbels and hair to enhance their lives.

The faces of a variety of marine mammals, including sea lions, seals, walruses, sea otters and manatees are adorned with long, thin whiskers known as vibrissa. These whiskers have more to do with sensing and interpreting what is going on in the water than they do with appearance.

The whiskers allow these marine mammals to sense or “feel” prey items that give away their presence via the vibrations they create when swimming. The whiskers also inform its owner of the location and perhaps the texture of food when they actually touch a food source. Some marine mammals such as harbor seals shed their whiskers annually while Stellar sea lions are known to keep some whiskers for as long as seven years before shedding and replacing them with new ones.

The possession of sensitive whiskers is an obvious advantage for any marine mammal that hunts or feeds at night, in murky water or at depths where light levels are low. Often quite prominent, the relatively stiff, tactile whiskers are loosely attached to the face and upper lip, but each whisker is mobile and controllable.

Studies show that seals and sea lions can use their whiskers to detect the water trail created by a swimming fish. The highly sensitive whiskers are able to detect tiny vibrations created when a fish swims, thus allowing these pinnipeds to capture prey in dark waters. For many years it was suspected that the whiskers only serve a useful role when a seal, sea lion or other whisker-faced marine mammal is quite close to its prey, but researchers now believe that harbor seals might be able to detect the water movements left by swimming herring from a distance of almost 200 yards (182 m).

Exactly how the mechanism works remains unclear, but researchers suspect that the whiskers of a swimming seal vibrate at characteristic frequencies and that when the whiskers cross the hydrodynamic trail left by swimming fishes, the vibrating frequency changes ever so slightly, providing a valuable clue to a hunting seal. Surprisingly, it has been shown that fishes as small as an average goldfish can leave a wake of tiny, swirling vortices that last as long as 30 seconds or more.

Researchers believe the whiskers of manatees are at least as sensitive as our fingers, and studies with captive animals have demonstrated that just by using their whiskers, blindfolded manatees can distinguish between targets that have different-width grooves and ridges. In natural settings the whiskers are used to help manatees and other marine mammals understand exactly how to move their mouths and lips to take in the food. 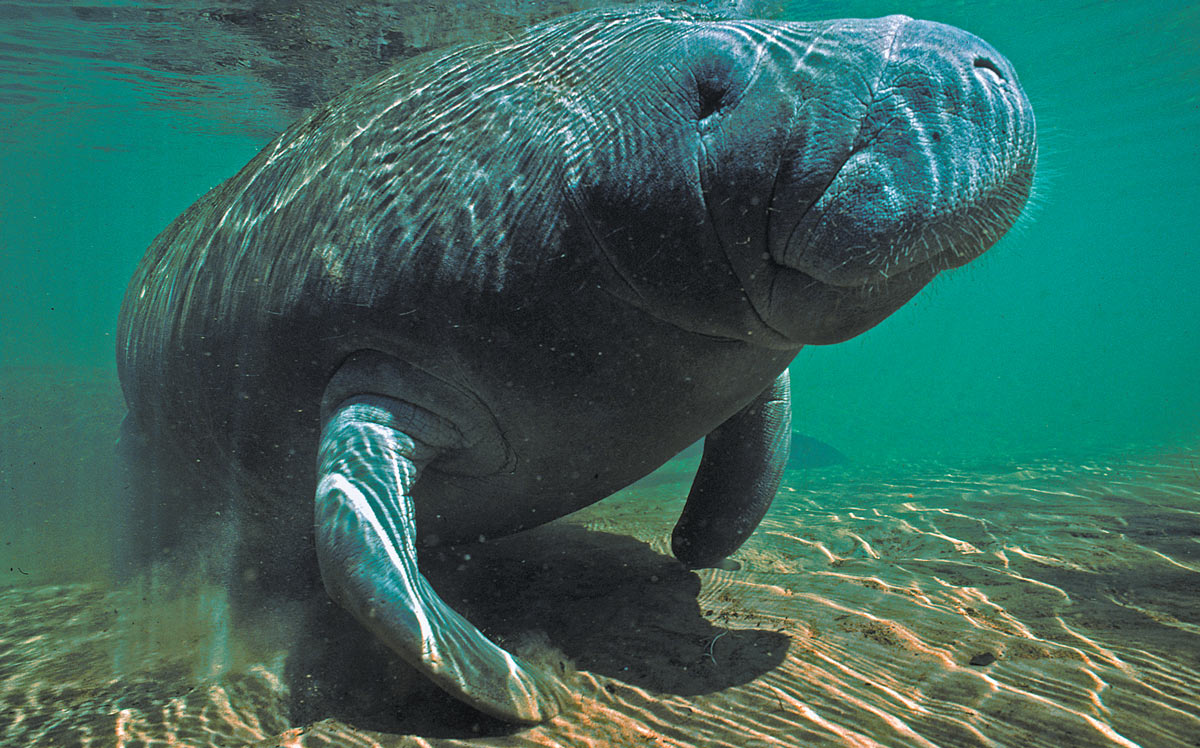 In natural settings, whiskers are used to help manatees and other marine mammals understand exactly how to move their mouths and lips to take in food. Photo by Marty Snyderman.

For good reasons, many Americans, especially those who grew up in the south, likely think of catfishes as freshwater creatures. In North American waters most catfishes occur in freshwater lakes, ponds and slow-moving streams. Channel catfish, on the other hand, typically are found in fast-moving waters.

The catfish gets its name from the two to four pairs of whiskers on the upper jaw that give these fishes a catlike appearance. The “whiskers” are actually long, thin sensory organs known as barbels that are used to help the fish taste chemicals in their surroundings. Like goatfishes, toadfishes, and other fishes equipped with barbels, catfishes use these chemosensory organs to poke and probe the sea floor to find food, and in the case of many catfishes, food means just about anything is fair game.

A number of the world’s 2,000-plus species of catfishes occur in salt water, and some, especially the schooling Indo-Pacific species known as the coral catfish, Plotosus lineatus, are often encountered by sport divers in reef communities. As juveniles, finger-long coral catfish often gather in schools that number several hundred individuals. 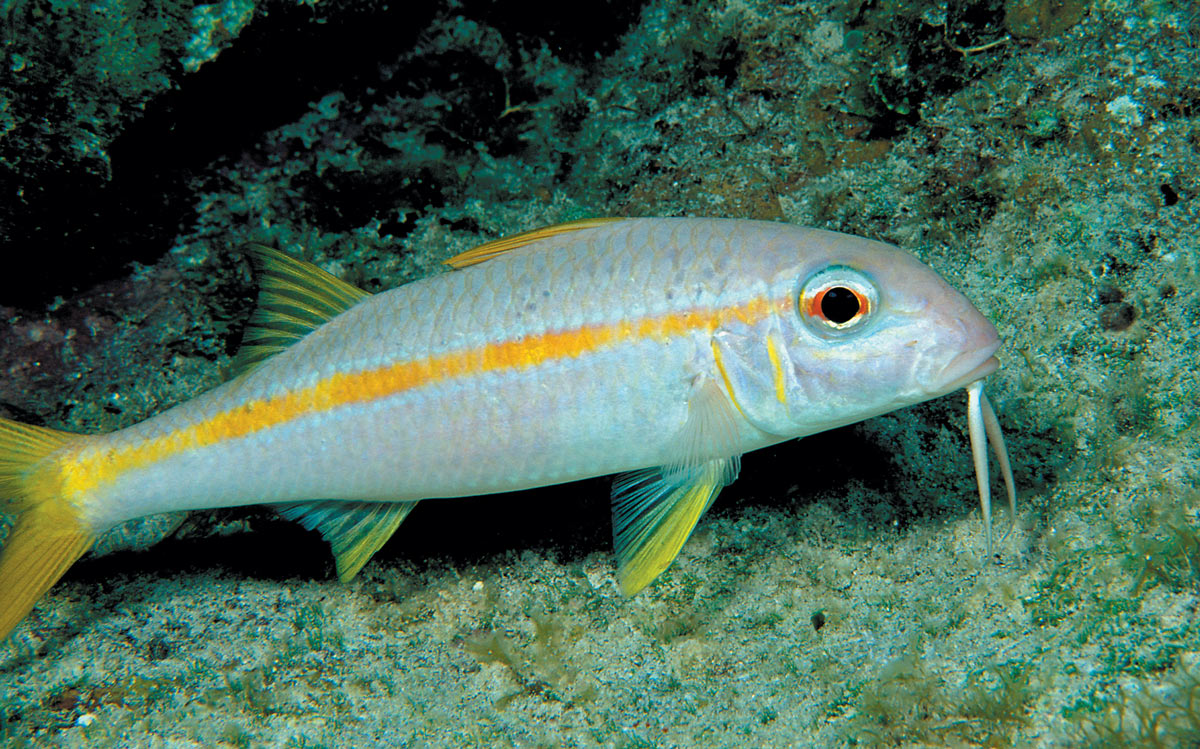 Sensitive receptors in the barbels of goatfishes enable these fishes to detect chemical cues that indicate the presence of prey items that might otherwise be difficult to detect. Photo by Marty Snyderman.

As sport divers we routinely encounter many of the world’s 55 known species of goatfishes in coral reef communities and nearby rubble zones and sand flats in all of the world’s tropical and warm temperate seas. Described in six genera, all goatfishes are members of the family Mullidae. Bottom dwellers, these fishes have elongated bodies that range in color from yellow to off-white to red with some spots, stripes and bars. Goatfishes possess a pair of well-separated dorsal fins and a distinctly forked tail, but as you might suspect, it is a pair of usually whitish chemosensory barbels that look like chin whiskers that provide goatfishes with their distinctive appearance.

Sensitive receptors in the barbels enable these fishes to detect chemical cues that indicate the presence of prey items that might otherwise be difficult to detect. If you watch a swimming goatfish for any extended period of time you are likely to see the fish lightly touch its barbels against the bottom. However, there are times when the barbels are folded up against the lower jaw and are not readily apparent.When on the hunt, goatfishes push their barbels into the sea floor, and quite often a puff of sand or mud rises up as the fishes dig into a soft bottom with their snout in attempts to uncover and grab their favorite prey, which consists of numerous small fishes and a wide variety of invertebrates including worms, shrimps, crabs, mollusks and echinoderms. When goatfishes feed they are often closely followed by a variety of wrasses and other fishes that hope to steal any prey that escapes the goatfish.

Some goatfishes, such as the Caribbean’s spotted goatfish (Pseudupeneus maculatus) tend to be solitary. In contrast, yellow goatfish (Mulloidichthys martinicus) prefer to gather in large schools that swim over reefs when they are not feeding, but they are usually solitary and disband into smaller groups when hunting. When not hunting, goatfishes often lie motionless on the sea floor and match their color to blend with their surroundings. They are capable of rapid changes in both color and pattern, and often appear quite different when at rest, feeding and being cleaned. 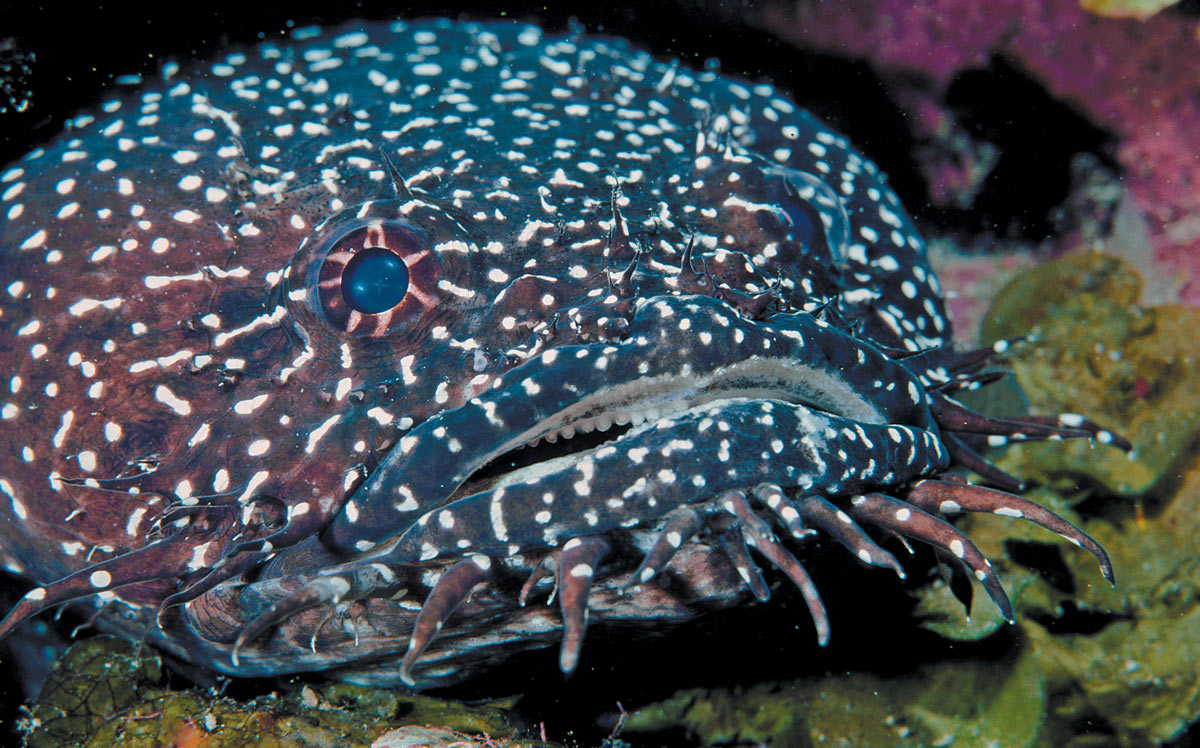 Most toadfish specimens are less than 12 inches long. Photo by Marty Snyderman.

Occurring in the Atlantic, Indian and Pacific oceans, toadfishes number 69 species in 19 genera. Given their common name because they often croak like a frog by vibrating their swim bladder when distressed, toadfishes are unusual, barbel-bearing fishes that some would describe as nothing short of ugly. All are members of the family Batrachoididae.

Toadfishes are bottom-dwelling creatures that resemble few other fishes. Their heads are greatly flattened, and their wide mouths appear to be far too large for the length of their bodies. Most specimens are less than 12 inches (30 cm) long. A “beard” of chemosensory barbels is prominent on the chins of many individuals, and in many instances the teeth are exposed when a toadfish is at rest on the sea floor.

Tending to be rather sluggish in their movements, toadfishes often hide in recesses in the reef during the day, and at night they lie in wait near the openings of small crevices and in depressions under coral ledges hoping to ambush a variety of crustaceans and mollusks that wander by. 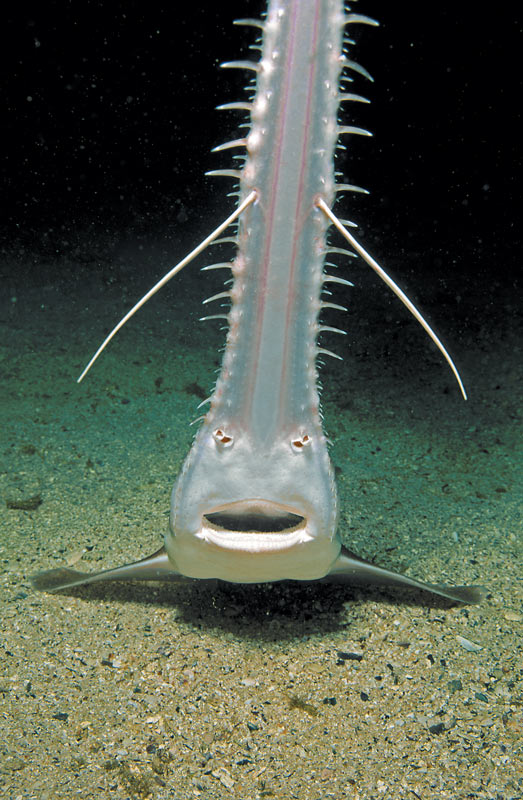 It is believed that when hunting, longnose saw sharks “taste” their way along the sea floor as they look for prey. Photo by Marty Snyderman.

A number of species of bottom-dwelling sharks including some nurse, blind, angel, zebra, saw and wobbegong sharks are equipped with chemosensory barbels. Also known as nasal barbels, the sensory organs are connected to the mouth by a groove that allows water that has passed over the olfactory organ to flow into the shark’s mouth.

In some species — nurse sharks and blind sharks as examples — each of two barbels looks like a single long whisker that hangs downward from the shark’s face. In other species the barbels look more like fleshy flaps of skin attached to the lower jaw. In both instances the barbels are equipped with sensitive sensory and chemical receptors that help the sharks detect the presence of prey. Found at the forward part of the head near the nostrils and close to the sea floor, the barbels are perfectly positioned to help these bottom-dwelling sharks detect a variety of bottom-dwelling prey such as mollusks, crabs, lobsters, echinoderms and fishes.

In the case of the longnose sawshark, the long rostral barbels are near the middle of their long snout, or rostrum. It is believed that when hunting, longnose sawsharks “taste” their way along the sea floor as they look for prey that might be buried in the soft substrate. These sharks can push their barbels into the sand to explore the area, and they use their snout to uncover a victim that is then impaled with the modified teeth that line the sawshark’s snout.

The faces of a number of other species of bottom-dwelling sharks such as wobbegongs as well as the bony fishes known as scorpionfishes and stonefishes are also adorned with fleshy flaps of skin that adorn the face and in some cases hang down over the mouth. The tasseled wobbegong, Eucrossorhinus dasypogon, provides a classic example of what might be described as a “bearded, bottom-dwelling shark,” as its upper jaw is surrounded by several finely branched dermal lobes that collectively resemble a beard. Within the mass of tassels are branched nasal barbels and grooves that channel surrounding water to the shark’s mouth. In other species the flaps of skin and flesh are not as intricate, and they help these animals camouflage themselves by blending into their surroundings and hide the location of their mouth.

In stonefishes and scorpionfishes the flaps of skin that border the mouth and face lack barbels, are not part of the fishes’ olfactory system, and are used solely for disguise and camouflage.

Now you know; in the underwater world there is a lot more to whiskers, barbels and “beards” than meets the eye.