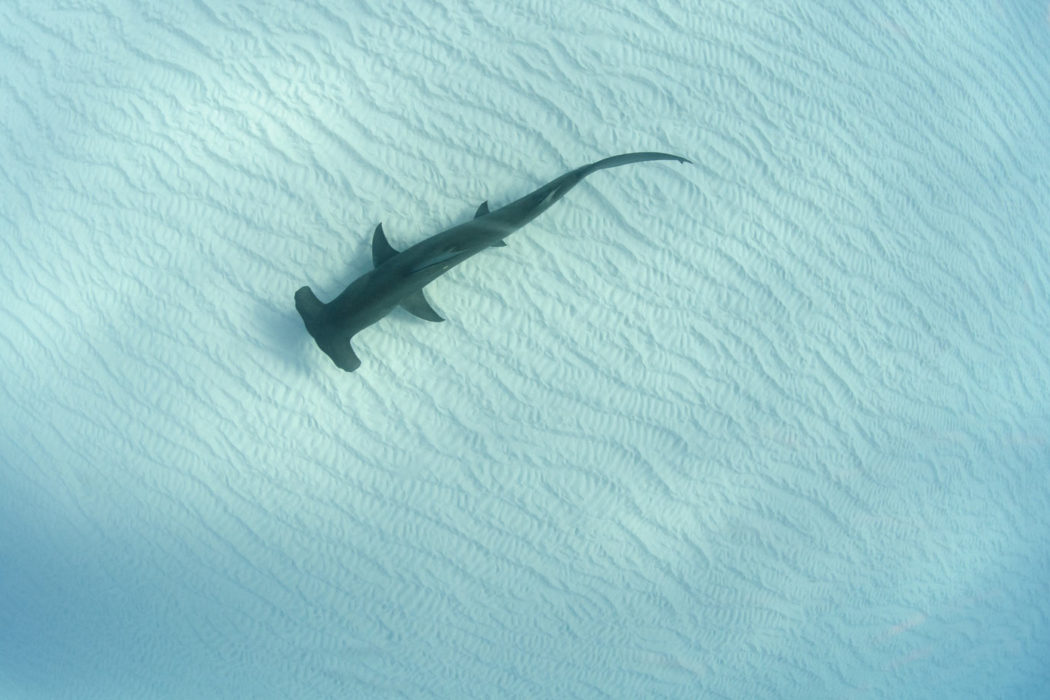 The shark first appeared along the edge of visibility. All I could make out was a large, dark shadow that slowly circled at least 100 feet (30 m) away. I turned with the shark as it swam around me, hoping that it would come in for a closer look. After a few revolutions the animal disappeared from my view, and I began to wonder if today just wasn’t going to be my day. But if I have learned anything in the business of photographing marine wildlife it is that while not all acts of patience are rewarded, patience is often a key element in success when the fates are kind. So I decided to be patient and wait in the warm, clear, blue Bahamian waters.

This day, fate was kind indeed, and a few minutes later the shadowy figure appeared again. But instead of circling, it swam right at me. I raised my camera housing to my eye and took six shots as the shark made its pass just overhead. My heart hammered away in my chest; the hammerhead disappeared again and the “moment” was over.

I assure you that although this encounter was brief, the experience is firmly embedded into my memory. Over the years I have witnessed thousands of underwater scenes through the viewfinders of my cameras, and in my opinion, few sights in nature are as awe-inspiring and dramatic as that of a large hammerhead shark swimming right at you. Many hammerheads are large, impressive, muscular, yet graceful animals, and no doubt about it, there is something about the hammer-shaped head and towering dorsal fin that commands your attention.

As is the case with many shark families, there is some debate regarding the total number of living species of hammerhead sharks found throughout the world. Some specialists state the number as eight, while others suggest that nine is a more accurate count. In any case, all hammerheads are described in the family Sphyrnidae, a name that is derived from the Greek word sphyrna meaning hammer.

All hammerheads share the specialization of a laterally expanded skull that is known to scientists as a cephafoil. Most evolutionary specialists consider all hammerheads relatively modern animals, having first appeared in the oceans of Earth 60 million to 120 million years ago. It is generally believed that ancient sharks are at least 450 million years old, although no living species is anywhere close to that age.

In theory, the hammerlike design of the head offers several advantages compared with a more stereotypical, tapering shark-shaped head. First, the elongated and flattened head serves as a wing, giving the shark increased lift at the front end of the body. Thus, in theory the hammerlike shape of the head aids in swimming efficiency. However, there is no data to support the statement that hammerheads are better swimmers than other sharks.

Second, the hammer-shaped head helps spread sensory receptors over a wider area, allowing thesharks to more accurately pinpoint the location of specific stimuli. The head and snout are equipped with hundreds of specialized organs known as ampullae of Lorenzini. These gel-filled, pit organs help all sharks detect information received from the electrical fields emitted by potential prey, potential threats and by the Earth’s magnetic field.

The eyes and nostrils of hammerheads are on either side of the head, and all members of the hammerhead family are believed to have an excellent field of vision and superb sense of smell.

The size of full-grown hammerheads ranges from as small as 3 feet (1 m) to longer than 20 feet (6 m). The great hammerhead (Sphyrna mokarran) is the largest, and for that reason, perhaps the most impressive of the hammerheads with individuals having been documented to grow more than 20 feet (6 m) long. The great hammerhead is gray-brown above, fading to a paler off-white below. The leading edge of the head is almost flat with the exception of an indentation in the center. Being quite tall and pointed with a curved rear margin, the first dorsal fin stands out prominently and usually makes a big impression on observers.

Normally found in coastal areas over continental shelves and near oceanic islands, great hammerheads occur in almost all warm temperate and tropical seas around the world where they range from the surface to a depth of 260 feet (79 m). Equipped with a marvelous olfactory system, great hammerheads prey primarily on other sharks and rays, especially stingrays, a variety of fishes that inhabit the water column, and a sampling of squids, octopuses and crustaceans.

When attacking a large stingray, a great hammerhead will often use the edge of its broad head to pin its victim to the sea floor. Then the shark rotates its head to the side so that it can bite off a portion of the stingray’s winglike pectoral fin. After injuring the ray, the shark continues to swim around the ray as the shark repeatedly comes in to take another bite out of its incapacitated prey until the ray has been consumed.

Hammerheads give birth to live young in litters that vary from 15 to 30 pups. The hammer-shaped head of these sharks isn’t the best design for birthing purposes. Fortunately, the heads are pliable so they can fold while the pups pass through the birthing canal. Soon the lobes become more rigid and retain their gliderlike shape. Being well-developed and looking like miniature adults, the pups range from 12 to 18 inches (30 to 45 cm) long at birth.

Many sharks are solitary creatures, but that is clearly not the case with scalloped hammerheads (Sphyrna lewini). Although they are sometimes seen alone, the scalloped hammerhead has gained considerable notoriety from its well-publicized schooling behavior that is commonly observed by sport divers in places such as Mexico’s Sea of Cortez, Costa Rica’s Cocos Island, Ecuador’s Galapagos Islands and the Gulf of Mexico. School sizes vary in number from only a few animals to several hundred.

In many locales, scalloped hammerheads tend to school by day near prominent seamounts or other undersea landmarks. At night the schools break up and the sharks become solitary hunters as they search for their preferred diet of squids, octopi and a number of bony fishes. The young typically feed on bottom-dwelling fishes and invertebrates.

Tracking studies have shown that during nightly forays the sharks often swim as far as 14 miles (23 km) away from their daytime gathering place, but they have little difficulty finding their way back by early morning. The ability of scalloped hammerheads to detect slight variations in the Earth’s magnetic field is believed to be the key to their navigational prowess.

At times, the sharks appear in uncountable numbers as members of the school repeatedly descend toward the reef, ascend and circle back to the reef. During these moments divers have a magical opportunity to get a close look at these powerful, yet majestic-looking and mysterious sharks.

In addition to being the only species of hammerhead that is known to school when not migrating over long distances, scalloped hammerheads can be distinguished by the wavy, or scalloped, appearance of the leading edge of their head. The center of the head is deeply indented, thus accentuating the scalloped look and giving rise to the species’ common name.

Other members of the hammerhead family include the bonnethead (Sphyrna tiburo), the smooth hammerhead (Sphyrna zygaena), winghead shark (Eusphyra blochii) and the golden hammerhead (Sphyrna tudes), a relatively small species found along the northeastern coast of South America that gets its name from its yellow to orange coloration acquired from pigments obtained when consuming large amounts of golden colored shrimp and some catfish.

Attaining a length of only 3 to 4 feet (1 to 1.3 m), the bonnethead, Sphyrna tiburo, is one of the smaller members of the hammerhead clan. Also known as the shovelhead shark, the bonnethead is a harmless, inshore species found in the western Atlantic Ocean from New England (rare) to Brazil including the Gulf of Mexico, and in the eastern Pacific Ocean along the coast of the Americas. Bonnetheads tend to inhabit the surf zone, some reef communities, sandy plains and estuaries.

Schools of bonnetheads numbering in the thousands are documented to migrate to warmer waters in the winter and cooler waters in the summer; however, school sizes of five to 15 animals are believed to be more common. Interestingly, it has been discovered that bonnetheads secrete a fluid from their bodies (cerebrospinal fluid) that is thought to be used for communication with other members of their species, but the messages conveyed are not well understood.

It is well-known that many fishes routinely change their color to match their surroundings and to communicate behaviors such as feeding or the desire to mate. But in recent years shark researchers from the University of Hawaii accidentally discovered that some sharks also change color for a different reason. The skin of scalloped hammerheads darkens over time when the sharks are in bright, shallow water because the sharks tan.

When exposed to a lot of sunlight in the shallows for a period of several weeks, the amount of melanin, the pigment in the skin that is responsible for tanning, increased greatly causing the skin of the sharks to significantly darken, and turn some almost black. When at depth, the skin tends to be light brown to golden tan.