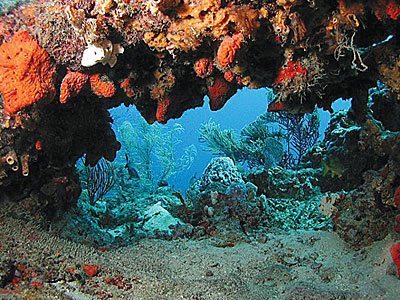 There is hardly a diver alive who hasn’t frantically signaled his buddy after sighting some interesting creature only to turn back to point at the original object of interest to discover that the creature is nowhere to be seen. That moment is usually followed by a bit of confusion and reorientation, a building sense of frustration followed by a few 360-degree turns and eventually embarrassment. Finally the diver has to look at his buddy and try to explain via underwater charades that there really was something very interesting here only a few moments ago.

Have you been there? Not that I can prove it, but my experience tells me that most experienced divers have been on both ends of that scenario more than once.

Actually, it is absolutely amazing how fast many marine creatures can virtually disappear in the proverbial blink of an eye. Of course, some of these animals swim away, but a lot of times the animals we saw once but can’t seem to find again are either very close to or exactly where they were when first seen. Some creatures retract into tubes and burrows, some bury in the substrate, and still others alter their coloration, color pattern and skin texture, making them very difficult to see.

Let’s take a look at some of the more common cryptic creatures that routinely cause us to embarrass ourselves when we try to show them to our dive buddies. Let’s also delve into the bag of tricks they use to hide from you and me, their prey and their predators.

As divers we know them as Christmas trees, feather dusters and tubes, but call them what you may, in the end, they are types of segmented worms. There is little question that Mother Nature was extremely lavish with the beauty she bestowed upon many species of marine worms, especially when you consider the appearances of their terrestrial cousins. The species known as Christmas tree worms, tubeworms and feather dusters live in permanent, or semipermanent, tubes of their own construction. We often see their exposed gill plumes, which are known to scientists as radioles. The gill plumes look like a whorl of delicate feathers extending from the tube they live in.

Worldwide, there are about 8,000 species of segmented marine worms. The term “segmented” is used because the bodies of these worms are divided into distinct sections, or segments. These worms are equipped with complete digestive, excretory, respiratory, circulatory and nervous systems and a number of sensory organs. Often called types of polychaete worms, all are described in the phylum Annelida and are members of the class Polychaeta.

Many polychaete worms, especially those that are sedentary, depend upon currents to bring them their food, chiefly a mix of tiny plankton and organic matter. The worms use their gill plumes like a sieve to capture their food and to remove oxygen from the water. In turn, segmented worms are heavily preyed upon by a variety of animals, especially fishes.

Occurring in hues of red, orange, yellow, green, blue, white as well as combinations, it is the colorful gill plumes of many sedentary species of polychaete worms that catch the attention of divers. However, the gill plumes represent only a small portion of the worm’s body. The rest of the animal lives in a self-constructed tube that is either attached to the sea floor or burrowed into hard corals and sponges.

Because sedentary segmented worms are attached to their surroundings and cannot flee, their best means of defense is to quickly, and I do mean blink-of-an-eye quickly, withdraw into their tubes at the first indication of danger. Often the slightest movement by a diver or a shadow cast will cause these tube dwellers to retract. If, however, you are patient, the gill plumes will probably re-emerge before much time has passed, but they will quickly withdraw again if the animal senses danger.

When the species known as Christmas tree worms retract their gill plumes, they close their tube with a hardened trap door known as an operculum. In some species the operculum is equipped with one or more sharp spines intended to further deter predators.

Members of the family of eels known as conger eels, garden eels are those “now you see them, now you don’t” sand dwellers that can make divers think that at best we are suffering from nitrogen narcosis and at worst that we are losing our minds.

Garden eels live in colonies with populations that often number into the several hundreds, or more. When undisturbed, these long, thin-bodied, flexible eels rise up from their burrows and face into the prevailing current so they can pick small particles of food out of the water column. From a distance, colonies of garden eels often appear to be gracefully swaying back and forth to exotic undersea music that you do not hear, much like the way cobras respond to the motions of snake charmers.

But when approached, entire colonies of garden eels are quick to slide back into their home burrows. If you get too close, or move too fast for their liking, the eels will rapidly disappear from sight. If you look away as you signal your buddy, when you look back, it can seem as if the entire colony has suddenly vanished, and your buddy might think the same thing has happened to your mind.

Due to their shy, wary nature, garden eels are unlikely to reappear unless you back off a considerable distance.

A number of species described in the phylum Cnidaria by the scientific set are also animals that divers might think of as “here one moment and gone the next.” A list of these species includes many corals, sea anemones and sea pens. Most cnidarians either live their lives attached to the sea floor or they drift about in currents, having little control over their speed and direction. To defend themselves from predators and to capture food, cnidarians rely heavily on their fast-acting, potent stinging cells, as they cannot pursue meals or outdistance threats.

Many corals depend at least in part upon currents to bring them food, but because many individual coral animals (known as polyps) are also light sensitive, these species tend to retract their polyps during the day unless currents are running hard. However, at night many corals extend their tentacles and look like colonies of delicate flowers.

A diver that is eager to show his or her buddy the extended polyps can cause them to retract by accidentally brushing against the corals, kicking or otherwise causing a sudden current of water that alarms the animal, and in some cases by shining a bright dive light directly on the coral. While the whole animal does not “disappear,” it certainly takes on a new and often far less interesting appearance when disturbed, as the tentacles are retracted.

The obvious message for divers is go slow, don’t touch, and don’t shine an intense light directly on corals at night.

Sea anemones tend to be less sensitive to light than many corals, as anemones often extend their tentacles during the day. But touching in a rough way, kicking debris on top of them or creating a sudden, strong current via body movements such as using hand signals from close range, can cause anemones not only to retract, but to “roll their bodies into a ball” as they try to cover up and protect themselves. So, if you accidentally disturb an anemone, or colony of anemones, when signaling your buddy over for a look, the anemone(s) are likely to retract their tentacles, and the only thing that is likely to get much of a look is you.

In the case of tube anemones, not only do they retract their tentacles when disturbed, they also retreat into their self-made tubes. Again, move slowly and deliberately around anemones, and both you and your buddy are far more likely to get a good look.

Primarily seen by divers in temperate seas, sea pens are colonial cnidarians with the colonies consisting of numerous individual animals (polyps) that work together for the good of the whole. Sea pens inhabit sandy areas. They often spend their days buried beneath the sand, rising up to feed at night. However, if threatened or disturbed, sea pens quickly bury themselves in the sandy sea floor. Some sea pens are rather slender, but others such as the fleshy sea pen found from Southern California to Alaska spread out and look somewhat like a pink to orange feathery fan on a stalk. Larger specimens stand as tall as 2 feet (61 cm). By comparison, the slender sea pen, also found in California waters, reaches a height of 1 foot (30.5 cm) or more, but has a width of only 2-4 inches (5-10 cm).

With many fishes, the main reasons for seeing them one moment but not the next are that they swim away into the distance or take cover. However, that is not the case with the species known as flatfishes, a group that includes halibuts, turbots, flounders and sand dabs. These color-change artists are masters of the art of camouflage.

As the name “flatfish” suggests, as adults the bodies of these low-profile fishes appear to be almost pancake-flat. As adults, they have both eyes on one side of their head and rest on the sea floor on the opposing side. Although they are sometimes encountered as they rest on top of a reef structure, flatfishes tend to reside in areas with sandy or muddy bottoms. The unusual positioning of their eyes enables these fishes to lie flat or even to partially bury themselves in the substrate with only their eyes protruding.

Given their low profile, these fishes can be difficult to spot, but that is only the beginning of their story. Flatfishes have an amazing ability to alter their color and color pattern to match their surroundings, and they can make changes in a heartbeat, even when the background is rather complex. For example, studies have shown that when prodded to settle on top of checkerboards, many flatfishes can actually take on a checkerboard pattern.

Given that degree of control, it is easy to understand how a flatfish that realizes it has been detected might simply alter the color and color pattern of its skin, or might quickly move to a new location and match that setting. Though not completely understood, it is known that the ability to match their surroundings is heavily dependent upon the sense of vision, as blindfolded flatfishes are unable to match the color and pattern of their surroundings.

Masters of the Disappearing Act

While many marine creatures can blend with their surroundings, the absolute masters of the art of deception are the octopuses. They seem to be able to melt into a reef whenever they so desire, evaporating into any hole large enough to fit their head.

But when holes are not immediately available, or if they simply choose to do so, octopuses are experts at altering their skin texture, color and pattern to match their surroundings. As octopuses move across the sea floor they routinely change the hue, tone, texture, brightness and pattern of their skin to blend in while on the go. Specialized pigment cells called chromatophores that are controlled by the animals’ muscular and vascular systems enable octopuses to make these changes.

If an octopus still feels threatened it can swim away using strong bursts of water forced from its expanded mantle through its siphons in a natural “jet engines-like” fashion, or it can squirt ink from specialized glands to create a smoke screen and to dull the olfactory senses of predators such as moray eels.