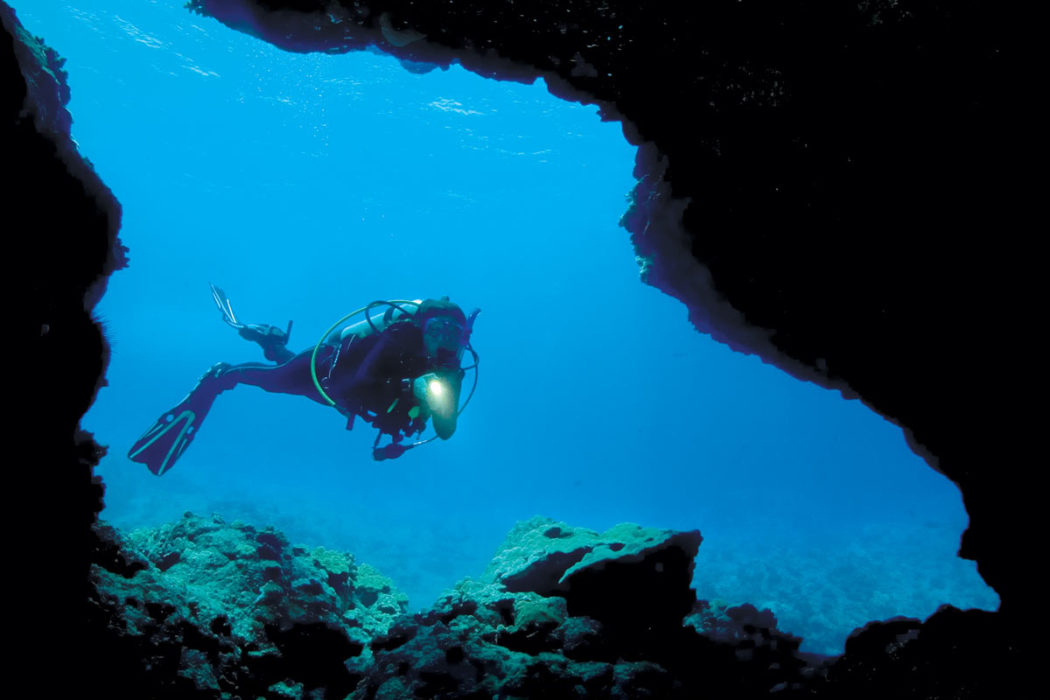 For many divers, the idea creates the most irresistible of urges. For others the mere thought makes their skin crawl. This concept that is compelling to some and repelling to others is merely the act of taking a close-up look into a hole, crack or crevice during a dive. The cavity in question might be the diameter of a large coin or the size of a small cave, but in any case, some divers cannot resist the urge to squeeze their face as far into the opening as they can, while others swim away as fast as their fins will propel them.

While cracks, caves, holes and crevices in reef communities are filled with mystery for divers, they are the places called “home, sweet home” by myriad marine creatures as these natural openings create safe havens for their residents.

Let’s take a look at some of the creatures that you might encounter if you decide to take a look rather than retreat.

“Put your hand in a crack and you won’t get it back, it’s a moray.” So goes the parody, and there is little question that this ditty sums up the feelings of many nondivers, and perhaps some new divers, when they think about moray eels. Of course, the classic image of a moray eel is that of a fierce-looking face with mouth partially agape and numerous, sharp, fanglike teeth exposed.

No doubt about it, as a moray slowly and continuously opens and closes its maw, its appearance is likely to cause the uninformed to think that the eel is salivating over its next meal. However, ichthyologists offer a different explanation by explaining that although moray eels are fishes, they lack the large gill covers used by many bony fishes to pump oxygenated water over their gills as they respire. Lacking these gill covers, moray eels use their large mouths as billowslike pumps to constantly circulate a fresh supply of oxygen-rich water over their gill tissues. Thus, it is the act of respiring — not salivating as it contemplates its next victim — that causes morays to continuously open and close their mouths.

Worldwide there are about 100 species of moray eels. Although some species of moray eels can commonly be seen free-swimming out of their holes, during the day most morays tend to hide in crevices with only their head, eyes and large, powerful, tooth-lined jaws being visible as they extend past the opening.

Morays are well-equipped for living in and around the small holes, cracks, crevices and narrow passageways of reef communities. The lack of both large gill covers and paired fins and the possession of fine scale and mucus-coated bodies enable morays to “back up without getting hung up” as they skillfully maneuver in tight quarters. Many fishes cannot go backward quickly, and are forced instead to make a “U-turn” when they want to retreat. Their ability to back up quickly and easily helps morays succeed in their roles as reef predators that readily feed on a wide variety of fishes, crustaceans and mollusks, especially octopi.

Even though morays have eyes that are often prominent, their sense of vision is not as useful as one might suspect. In fact, moray eels are known to rely heavily on their well-developed olfactory system when hunting. 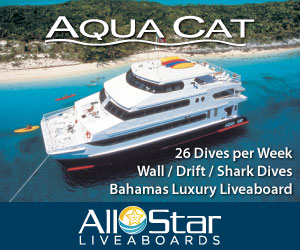 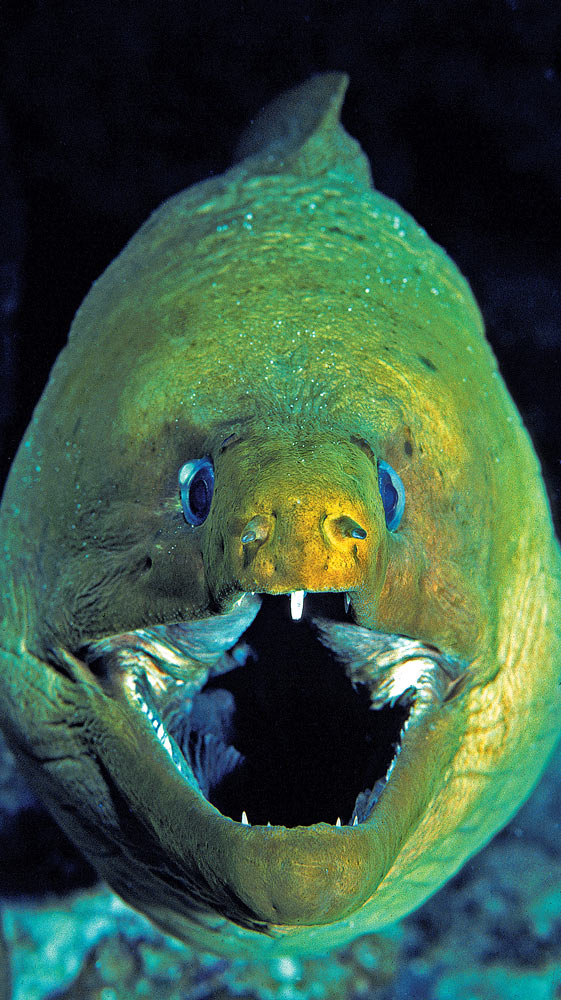 Moray eels use their large mouths as billows-like pumps to constantly circulate a fresh supply of oxygen-rich water over their gill tissues. Thus, it is the act of respiring – not salivating as it contemplates its next victim – that causes morays to continuously one and close their mouths. Photo by Marty Snyderman.

Lobsters, or bugs as they are often called by lobster hunters, often share holes with morays and other animals, especially during daylight hours when lobsters typically tend to retreat into the nooks and crannies of reef structures. During the day it is quite common to first spot their antennae projecting out from a hole or from under a ledge.

All lobsters are members of the phylum Arthropoda that are further described as members of the class Crustacea. Crustaceans are characterized by hard shells and jointed appendages.

While the spiny lobsters that populate many reefs in both tropical and temperate seas lack claws and are anything but threatening, the Maine lobster (Homarus americanus) and about 30 additional species of clawed lobsters do, in fact, possess a pair of large, powerful claws that are used for grasping, crushing and tearing prey and fending off potential predators. One claw of a Maine lobster is a toothed “crusher” claw used for pulverizing shells and a finer-edged “ripper” claw that resembles a steak knife used for tearing soft flesh. Of course, those powerful pincers can also be used to try to discourage a bug-hunting lobster diver as well.

Spiny lobsters tend to congregate with other members of their species. If you spot one, take a closer look. You will often see a dozen or more of these crustaceans seeking cover in the same cave. Also known as the American lobster, the Maine lobster tends to be more solitary.

Lobsters are not the only crustaceans that inhabit holes and caves. Numerous species of crabs and shrimps also use the caves, cracks and other confines of reef structures as places of refuge. Many of these species routinely prove to be amazingly adept at squeezing into places that seem to be larger than their hard-shelled bodies could possibly allow. A number of colorful species of cleaner shrimps as well as cleaner fishes known as gobies that help remove irritating ectoparasites from the skin of morays can often be seen back in holes as they associate with the eels. 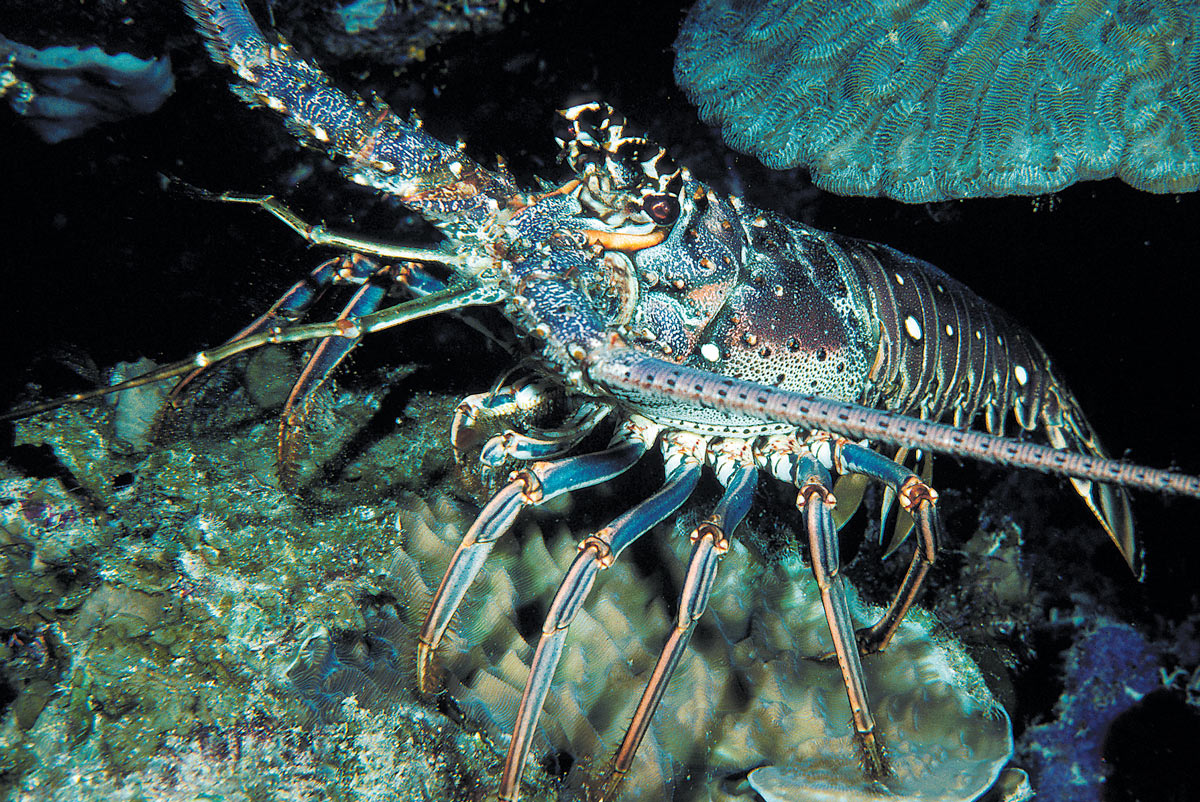 If you spot a spiny lobster, take a closer look. You will often see a dozen or more of these crustaceans seeking cover in the same cave. Photo by Marty Snyderman.

Many species of bony fishes prefer to inhabit the recesses of reef areas. A list of some of the more prominent species include squirrelfishes, bigeyes, silversides, toadfishes, soapfishes, drums, croakers, sweepers, puffers and balloonfishes in addition to numerous other species of angelfishes, butterflyfishes, groupers snappers and parrotfishes that seek cover at night. While the bright red color of squirrelfishes and bigeyes makes these fishes appear to be quite conspicuous when illuminated by a dive light or sunlight, their deep red coloration helps to make these fishes very difficult to see when they move out of the cracks and crevices to hunt at night. Their large eyes help these species gather sufficient amounts of light so that they can seek out prey at night.

As a rule fishes that are hiding in holes and caves and under ledges are rather wary of intruders. A slow approach while maintaining neutral buoyancy will usually get you a closer look than a bull-in-the-china-closet approach. When using a light to see cave-dwelling fishes, it often works best to illuminate these fishes only with the dim periphery of your light rather than the brightest part of the beam. As a rule, these fishes won’t want to move into the bright part of the beam and often those that don’t bolt away immediately will “freeze where they are” and you’ll have enough light to get a good look.

Many people think of the open sea as the domain of sharks, but perhaps surprisingly, several species of sharks prefer to inhabit caves and even small crevices in reefs. Certainly those species known as nurse sharks routinely wedge themselves under ledges when resting. Whitetip reef sharks also commonly gather together in caves and under ledges. Smaller species such as epaulette sharks, horn sharks and Port Jackson sharks are also commonly seen in caves and tucked away in the latticework of reefs.

As is usually the case, the vertebrates and some larger invertebrates usually grab most of our attention, but a close examination of many cracks, caves, crevices and ledges often reveals more species of invertebrates than one can easily track. It is quite common to find delicate species such as nudibranchs, anemonelike corallimorphs such as the orange ball anemone, a favorite find of many Caribbean night divers, encrusting sponges and bright yellow cup corals when you look into holes, cracks, crevices and caves.

A variety of colonial bryozoans can routinely be seen if you look at the walls of small caves and in cracks and crevices. Many people have never heard of bryozoans, but one species, Schizoporella floridiana, literally built much of south Florida with their calcite skeletons. Bryozoans bear some resemblance to moss, and in fact, the name “bryozoan” is derived from the Greek words for “moss” and “animals.” Most bryozoans are lightly colored in hues of tan, pink, orange, white and brown with colonies ranging from only a few inches to several feet across. A single colony is often composed of thousands of individual animals that are all contained within a common skeletal network.

Scallops and oysters can often be seen in holes in coral heads as these mollusks open their shells to feed by filtering the water at night. Inhabiting many parts of the Caribbean, the flame scallop, Lima scabra, is one of the most stunning of all bivalves. Usually found in deep holes and under ledges, flame scallops are easily recognized with the help of a dive light as their cherry-red mantle that is outlined with long, white, tentaclelike projections virtually glows between its two shells. A surprising number of colorful species of sea urchins often hide in the recesses of cracks and crevices in reef communities. A careful look is often rewarded with a memorable sighting, but be careful to look before you grab or settle.

Of course, in a single article there is no way to mention all of the species you might see if you decide to take a close look into a crack or crevice, under a ledge or into a cave. But hopefully, I have helped pique your interest so that, without throwing caution to the wind, you will swim in for a closer look rather than letting your imagination deprive you of a great diving experience the next time you question whether you should look under a ledge, or into a hole, crack, crevice or cave.

Surprises in the Pacific Northwest

Look under a ledge or into a hole in a rocky reef in the Pacific Northwest and you just might find yourself eyeball to eyeball with a giant Pacific octopus that weighs several hundred pounds or a scary-looking wolf eel. Both species have reputations for being fierce and aggressive. At least, that is what sea lore would have us believe. The truth is, both the giant Pacific octopus and the wolf eel can be extremely shy and docile, and if approached in an aggressive manner, both species are likely to retreat into their lairs. So much for sea lore.

Interestingly, the species known as the wolf eel is not an eel at all. Wolf eels are a type of bony fish that is actually more closely related to the fishes known as blennies than they are to eels.