The term muck diving doesn’t sound very appealing. That feeling only gets reinforced when you learn that muck divers spend a lot of time looking at small, rather drably colored creatures that do a good job of blending into mostly drab surroundings. But make one muck dive, and you might be hooked for life. 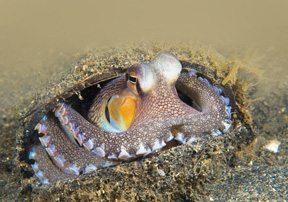 Muck diving has gained popularity in recent years. The reason is simple: A seemingly uncountable number of absolutely bizarre-looking creatures live here, many of which exhibit mind-boggling adaptations and behaviors.
For photographers, the muck can be a virtual gold mine, but locating subjects and getting high-quality results require a combination of patience, skill, discipline and luck.

When diving over a bottom that consists primarily of silt, sand or mud, it is imperative to move in a slow, deliberate manner, and to avoid stirring up the bottom sediment. There is a good chance that stirred-up particulate will turn into ruinous backscatter.

Another key to successful muck diving is to recognize that overlooking many muck residents is all too easy. So, go slow, look closely, and then look again.

While some creatures of the muck are quite colorful, many are not. When photographing those that are drably colored and that blend well with their surroundings, it is often helpful to compose photographs and light subjects in ways that accentuate any contrasts between the subject and its surroundings.

In many muck sites it is not uncommon to come across cans, bottles and other forms of trash. While the thought of people using the ocean as a trash can is revolting, discarded trash, whether organic or inorganic, routinely gets used as a home by a variety of muck residents.

Many of the thoughts mentioned above played a part in my ability to create the photograph of the coconut, or veined, octopus shown here. A generally drably colored creature, this cephalopod is known to use discarded coconut husks as its home. To get this shot I slowly swam to a place where I could see into the opening while being careful not to kick up the bottom sediment. Lucky me, I found this cooperative octopus looking back at me.

I eased myself to one side so I could compose a frame that revealed the animal’s eye, and so I could use the yellow blotch below the eye to add a splash of color and contrast to the scene. In addition, I composed the shot so viewers could see that the octopus was using a coconut husk as its home and get an idea of the nature of the bottom sediment. Hopefully, viewers will gain an appreciation of the coconut octopus and understand why so many photographers are so crazy about muck diving.