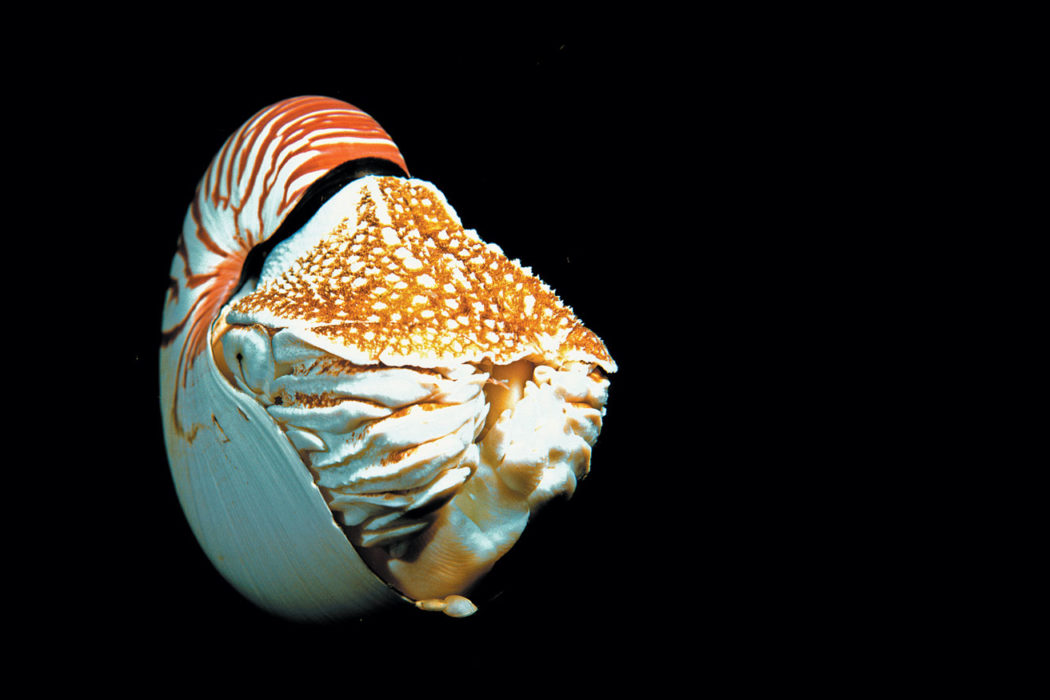 Most cephalopods are characterized by their possession of an internal shell or lack of a shell. However, the nautiluses, like the chambered nautilus pictured here, are an exception as they are equipped with an external shell and a fleshy hood that can seal the shell. Photo by Marty Snyderman.

Imagine what life might be like if you were a sea creature that could squeeze your body through a hole not much larger than your eyeball. Consider how useful it would be if you could instantly alter the texture and color of your skin to match your surroundings. In the blink of an eye you could be incognito or advertise your presence and, perhaps, your mood or even complex thoughts such as your desire to mate or defend your turf.

Perhaps in your effort to go unnoticed you would prefer to bury yourself in the sand. If simply trying to hide and get away from the world doesn’t get the desired result, consider the advantage of being able to squirt a cloud of ink that not only creates a decoy and obscures vision but that also dulls the olfactory senses of creatures that might desire to do you harm.

But wait. There’s more. You might opt to create a coat of mucus and sand that in a moment of danger can be discarded to confuse a predator, causing the hunter to divert its attention, giving you precious time to vanish from the scene. You might mimic the appearance of other sea creatures. Or you might chose to “drop a limb,” sacrificing part of your body that can be regrown, to facilitate an escape. Perhaps using your ability to fly as far as 200 feet (61 m) would be the best means of escape. And if this repertoire of Houdini-like tricks doesn’t enable you to escape from a dangerous situation or buy you the attention you hoped for, then you can opt to try a change of scenery by swimming away at a speed that is as fast as many fishes can swim.

To accomplish all these feats, you’d need to be a cephalopod, a member of a group that contains squids, octopuses, nautiluses and cuttlefishes.

Cephalopods are a class of invertebrates described in the phylum Mollusca. In laymen-speak the members of this phylum are mollusks. Other mollusks include snails, sea slugs, clams, oysters and chitons, all of which are creatures that have an external shell that protects their soft bodies. In contrast to these close relatives, most cephalopods are characterized by their possession of an internal shell or lack of a shell. However, the nautiluses are an exception as they are equipped with an external shell and a fleshy hood that can seal the shell.

While counts and estimates vary, worldwide there are about 786 living species of cephalopods. However, eons ago there were many thousands of species as cephalopods were for millions of years among the oceans’ most successful animals. All living species inhabit marine or estuarine waters, meaning there are no freshwater or terrestrial cephalopods. Collectively speaking, cephalopods are found in every region of the world’s oceans from the shallows of warm, tropical seas to deep, frigid polar seas. Amazingly, they vary in size from species that are only a centimeter long to what many specialists believe is the largest of all invertebrates, the giant squid, an animal that attains proportions of 60 feet (18 m) and roughly 1,000 pounds (454 kg).

Some cephalopods are bottom-dwellers, while others live their lives entirely in mid-water or in surface waters. Astonishingly, some species live in water that is 4.3 miles (7 km) deep. While some cephalopods have been well-studied, many others have not, and on the whole, teuthologists — specialists that study cephalopods — generally agree that a great deal remains to be learned about this amazing group of animals with new species and new behaviors continuing to be documented.

The name cephalopod is derived from the Greek words “kephalos” meaning head and “podos” meaning foot. Known as tentacles and as arms, the limbs of cephalopods are connected directly to their head. An analogous form in a human would be having our arms and legs attached to the edges of our mouth.

Octopuses possess eight tentacles, squids and cuttlefishes have 10, while nautiluses possess up to 90. The tentacles of most species are armed with suckers, but again, the nautiluses are an exception.

Most cephalopods possess three hearts, one over each gill and one that serves the rest of the body. Ink is produced by a gland in the liver. Cephalopods are probably best known for their amazing ability to alter the color and texture of their skin, a feat accomplished by changing the shape of pigments known as chromatophores. The changes are used for camouflage, mimicry, alarm and mood displays and in various forms of communication.

All cephalopods are carnivores, preying primarily upon fishes, other mollusks and a variety of arthropods that are snagged with the tentacles or pounced upon and covered by the mantle while being attacked with a hardened beak and a toothed-tongue known as a radula that is used to tear prey into pieces. The beak and radula are used in concert to chew food into small pieces. In some species the tentacles are armed with swiveling hooks, circular saw-like suckers, spike-like clubs, or hooks.

Still other species such as the relatively small blue-ring octopus (Hapalochlaena lunulata) that inhabits shallow reefs of Australia, Indonesia, Papua New Guinea and the Philippines are highly poisonous, as they can inject potent venom into their prey when they bite. 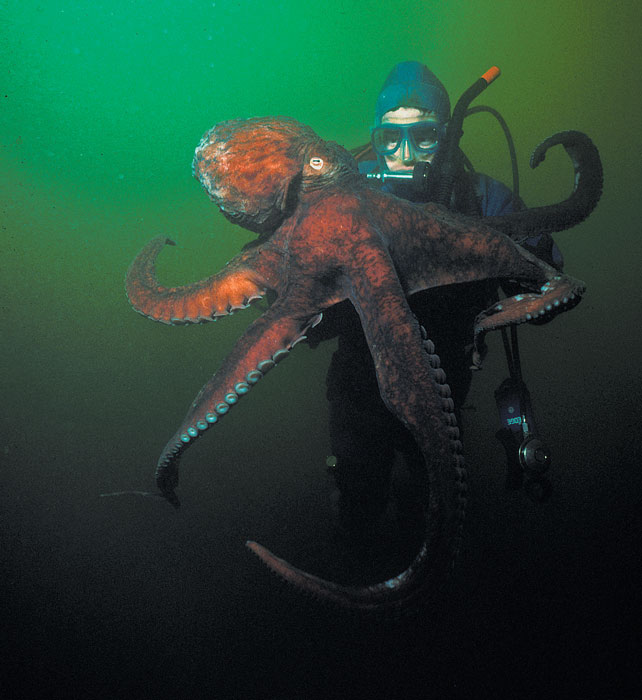 The giant Pacific octopus has a tentacle tip-to-tentacle-tip span of 25 feet (7.5 m) and weighs about 600 pounds (270 kg). Photo by Marty Snyderman.

While octopuses are able to walk along the seafloor and glide through the water column by making their body wing-shaped, and while squids and cuttlefishes can move short distances by rippling a flap of muscle around their body cavity (mantle), the chief means of movement in cephalopods is a natural form of jet propulsion. For jet propulsion to occur, surrounding seawater is first drawn into the mantle — a bag or tube-like body in which most vital organs are contained — cavity, and over the gills through an opening in the head.

The force of the water pressure is increased within the mantle as all orifices, except a tube known as the funnel or siphon, are sealed. When wanting to move, the animal quickly and forcefully contracts the thick muscles of the mantle wall, squeezing water out of the narrow funnel with enough power to propel the animal in a burst of speed.

Cephalopods control the direction of their movement by aiming their highly directable funnel. To escape a predator or to capture prey, a squid, octopus, cuttlefish or nautilus would aim its funnel forward to propel itself backward. Some cephalopods are known to use their funnels as “water guns,” shooting jets of water to irritate predators and to cause prey to move.

Squids are believed to be the fastest-swimming invertebrates and are known to attain speeds of up to 25 miles per hour (40 kmph), a speed that is roughly as fast as a leopard seal can swim and a coyote can run. But despite their speed, squids are sometimes called the “ice cream of the sea,” as many species are a favorite food source of many whales, dolphins, predatory fishes and sea birds.

Clearly, the more we learn about cephalopods, the more fascinating they become. While we need to stretch our imaginations to envision what life might be like as a squid, octopus, cuttlefish or nautilus, it is no stretch at all to say that spending a bit of bottom time watching and admiring any cephalopod will make any dive memorable.

The Race to Film Giant Squid

Ever since the first cameras were taken underwater, photographers from many corners of the globe have tried to be the first to photograph a living giant squid, a creature that was thought to be the largest living invertebrate. Giant squids washed ashore have measured more than 40 feet (12 m) and some experts think the creature can grow up to 60 feet (18 m). In recent years numerous expeditions and millions of dollars have been spent in the quest to be the first to capture an image of a living specimen.

Until just over one year ago such an image was thought of as underwater photography’s Holy Grail.

However, in September 2004 a team of Japanese scientists working in a submarine in deep, dark waters off Japan’s Ogasawara Island was able to acquire more than 500 images of a living giant squid, a creature known to scientists by its genus name, Architeuthis. Within both scientific and photographic circles their feat is acknowledged as a great accomplishment.

In March 2003 fishermen working in Antarctica’s Ross Sea encountered what is believed to be an undiscovered species of squid known by the common name of colossal squid (Mesonychoteuthis hamiltoni). Some scientists believe this species could grow larger than the giant squid. However, there is some debate whether the two specimens recovered to date do, in fact, represent a new species.

By comparison, the largest octopus, the giant Pacific octopus (Octopus dofleini) pales in size, having a maximum recorded tentacle tip-to-tentacle-tip span of 25 feet (7.5 m) and a weight of a mere 600 pounds (270 kg).