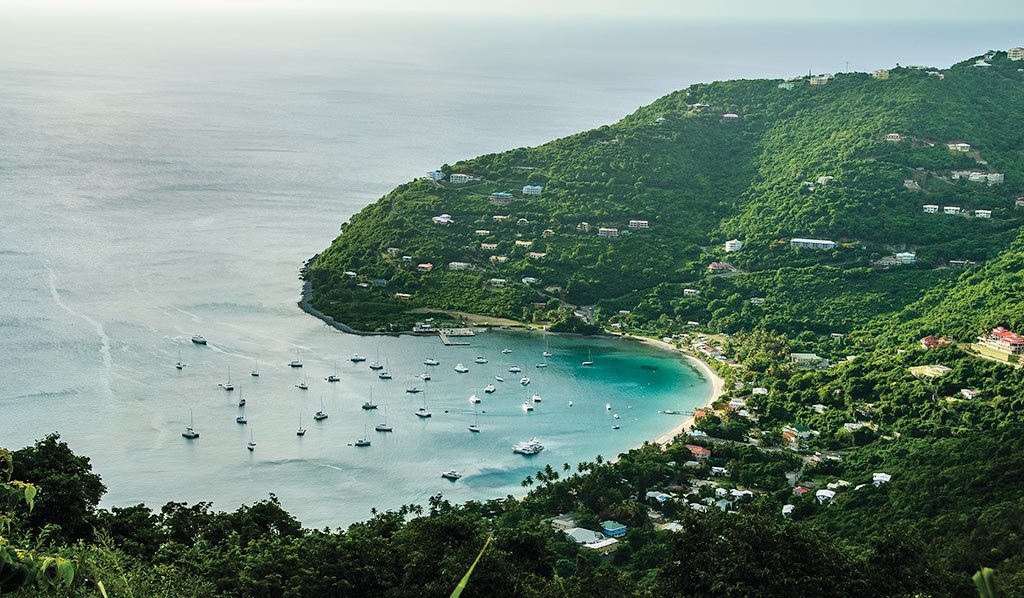 The azure waters encircling the islands are a yachter’s dream.

Stretching across the eastern Caribbean is a chain of about 60 enchanting islands known as the British Virgin Islands. The islands are ringed with beautiful beaches of sugary sand, rising from crystal-blue waters. Vacationers enjoy adventures available in the BVI’s 28 national parks, including hiking to the top of Sage Mountain or visiting rustic Callwood Distillery, a centuries-old distillery where rum is made the traditional way. Continuously operated since the late 1800s, the distillery is still run by descendants of its original owners.

Snorkelers and scuba divers immerse themselves in the beauty of the underwater world of ancient shipwrecks and fascinating marine life. With all the islands have to offer, it is easy to understand why they are a vacationer’s paradise by land and by sea.

In 1493, Christopher Columbus sailed upon a maze of stunning Caribbean islands. Nestled close to one another, the pristine islands were virtually untouched. Claiming the islands for Spain, Columbus named them after St. Ursula and the 11,000 virgins, “Las Once Mil Las Virgenes.” Centuries before Columbus arrived, Indian tribes traveling from Venezuela to the Virgin Islands became the island’s first inhabitants. The Amerindian tribes, Ciboney and Arawak, settled along the shores where they fished and hunted for their livelihood. Spain eventually abandoned the Virgin Islands as well, seeking richer bounty in South America. By the mid-17th century, a Dutch settlement was established on the western end of Tortola. When war broke out between Holland and England in 1665, the Dutch lost their foothold on the islands.

English settlers developed cotton and sugar plantations, and for a time, sugar was king, but because the industry relied on slave labor, it languished when slavery was abolished in 1834. By the mid-1800s, former slaves were the islands’ only inhabitants, living a life off farming and fishing.

In the decades following World War II the relatively quiet islands began to grow as a tourist destination and yachting center. More growth was stimulated when the International Business Companies Act was passed in 1984, creating a favorable climate for the establishment of foreign financial businesses. Today, the main cornerstones for the BVI stable economy are tourism and the international finance industry.

When the British Nationality Act was passed in 1981, the BVI became a territory of Britain. The islands are now a nonsovereign overseas territory of the United Kingdom with internal self-governing. They have a national flag, anthem and territorial song.

The BVI are composed of about 60 islands, islets and cays covering 59 square miles (153 sq km). Other than the coral atoll of Anegada, the islands are volcanic in origin; many are mountainous, some are extremely rocky and others are simply spits of sand. Stunning beaches fringe the islands, while protected bays and hidden coves provide excellent areas for snorkeling. Although the islands are in close proximity, each exudes its own personality and charm.

After clearing customs, visitors discover interisland travel is easy. Many islands are only a few minutes apart, making it possible to island hop. The adventurous can stand-up paddle (SUP) or windsurf from island to island. Other modes of transportation include day sailing, motorboat rentals or a public ferry. 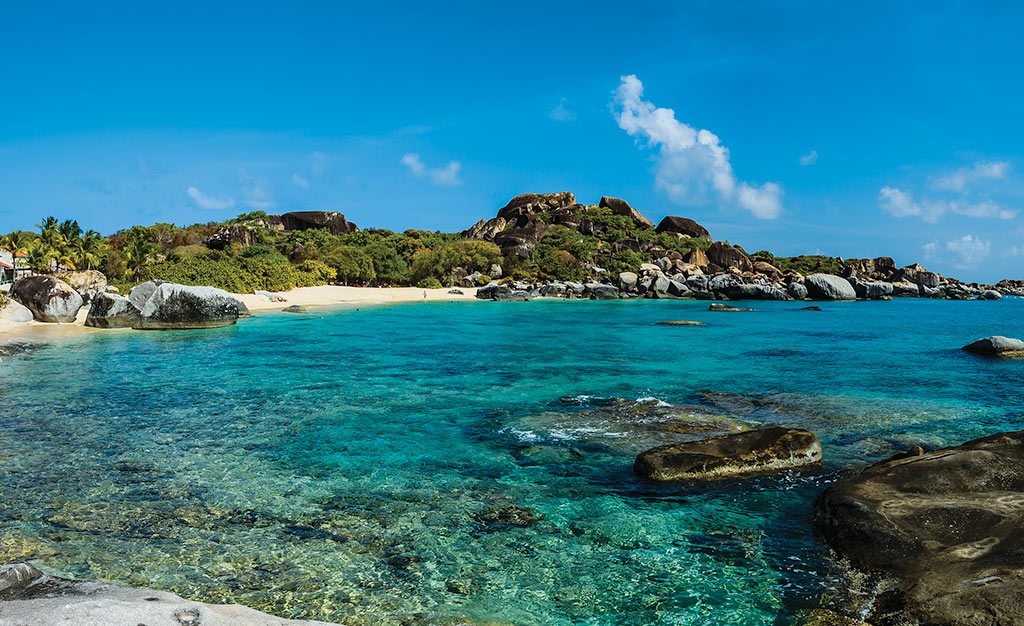 Visitors and locals are drawn to The Baths to explore the hidden grottos and pools tucked among the boulders.

The four major islands are Tortola, Virgin Gorda, Jost Van Dyke and Anegada. Considered the gateway to the islands, Tortola is the largest, busiest and most populated, with about 80 percent of the population of the entire island chain. The topography is very hilly, with steep mountains cloaked in lush vegetation. Stunning views are visible in every direction from the mountaintops. Road Town, on Tortola, houses an eclectic mix of hotels, restaurants, shops, museums, several marinas and yacht-filled harbors. Road Town is the center of commerce, the capital and the seat of the government.

Across the Sir Francis Drake Channel eight miles (13 km) east of Tortola is Virgin Gorda, the second-largest island in the chain. The slender island is divided into two distinct destinations separated by large mountains. Geographically dissimilar, the south end of the island slopes into a flat arid area scattered with enormous boulders and stunning beaches of deep, soft sand. Huge boulders separate the beaches, with narrow paths connecting the bays. On the northwestern shore, Devil’s Bay is home to a famous attraction known as The Baths. Part of the BVI National Trust, this awesome formation of giant granite rocks is an amazing example of Mother Nature at her best. Visitors and locals are drawn to The Baths to explore the hidden grottos and dramatic pools tucked among the boulders.

North Sound, on the opposite side of the mountain, is a water lover’s dream. The Sound is virtually encircled by the curvy north shore of Virgin Gorda and the shores of Prickly Pear Island and Mosquito Island, making it one of the world’s most protected sounds. Local activities such as sailing, windsurfing and kayaking are very popular. Motorboats and dinghies are available for rent; water taxis may also be hired for travel to various beaches, restaurants, bars and hotels.

Five miles (8 km) northwest of Tortola is Jost Van Dyke, a small, hilly island known as the “Barefoot Island.” With less than 300 residents, life is simple and relaxed. Jost Van Dyke is especially popular with yachters due to its excellent anchoring harbors, including Giant Harbor and Little Harbor.

Anegada differs dramatically from its volcanic, mountainous sister islands. Anegada is an 11-mile-long (18 km) flat coral and limestone atoll. The highest point is only 26 feet (8 m), making it almost invisible on the horizon. The island is framed by more than 24 miles (38 km) of deserted beaches; beneath the water’s surface, the extensive Horseshoe Reef surrounds the atoll. Anegada is 20 miles (32 km) northeast of Tortola and 15 miles (24 km) north of Virgin Gorda, making it remote and sparsely populated.

Due to its isolation, most of Anegada is reserved for birds and other wildlife by the BVI National Parks Trust (NPT). An established flamingo colony now includes the rare roseate flamingo, as well as terns, herons and ospreys. The NPT has designated most of the interior as a preserved habitat, giving endangered species such as the Anegada rock iquana a new chance for survival.

There are numerous other islands to explore; many are uninhabited. Some only have a hotel or beach bar, but virtually all have exceptionally beautiful beaches that are open to the public and accessible by ferry, charter or private boats. 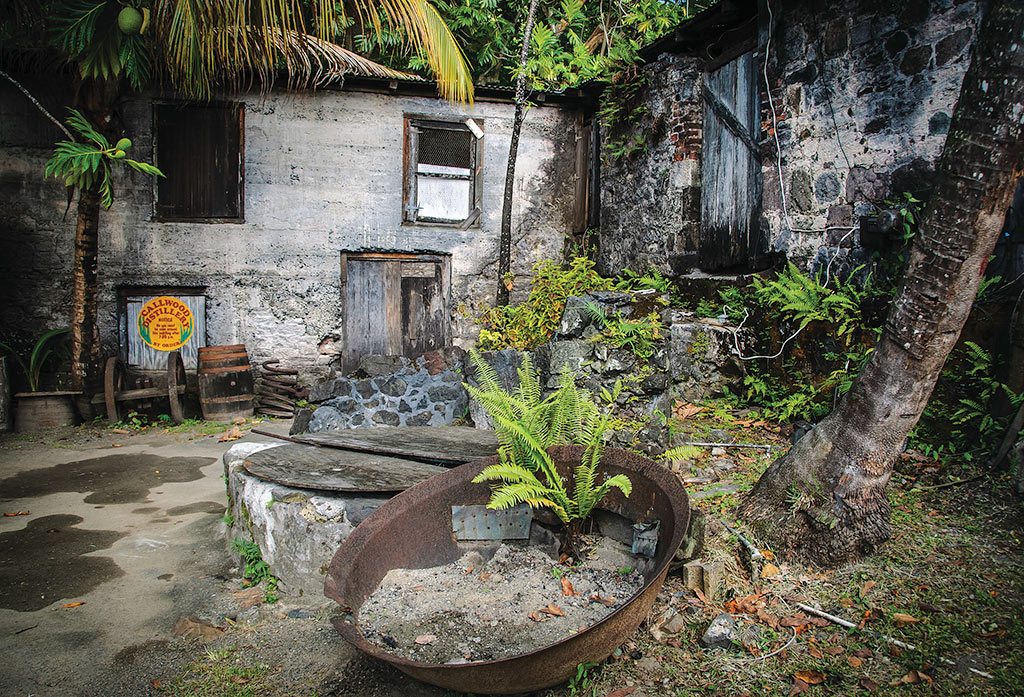 Rustic Callwood Distillery, a centuries-old distillery, where rum is made the traditional way.

The BVI took a giant step toward preservation when the NPT was established in 1961. The NPT is responsible for maintaining 21 parks and protected areas, including 20 hiking trails. Tortola alone has a half-dozen parks, including Sage Mountain National Park and J.R. O’Neal Botanic Gardens. Sage National Park was the island’s first national park, established in 1964. The mountain is the highest point in the BVI at 1,716 feet (520 m), with 12 trails inviting visitors to explore the majesty of the park. Named for the founder and first chairman of the NPT, the J.R. O’Neal Botanic Gardens include four acres (1.6 hectares) of lush tropical gardens.

On Virgin Gorda, the Gorda Peak National Park is a 265-acre (106 hectares) park that sits atop the highest area of the island. Hiking trails and picnic spots are plentiful; some trails are fairly strenuous, taking hikers through dense vegetation, stately mahogany trees and exotic orchids. In some instances, whole islands like Sandy Cay, Prickly Pear and Guana Island are designated as national parks. One historical site maintained by the NPT is the William Thornton Estate Ruins in Tortola. Born on Jost Van Dyke in 1759, Thornton rose to prominence and was later chosen as the designer of the U.S. Capitol Building.

The warm, clear Caribbean waters beckon divers to experience beautiful reefs, marine life and shipwrecks, one of the main attractions in the BVI. Because the islands are volcanic in origin, divers will discover fascinating formations, such as caves, tunnels and overhangs, all of which create an exceptional habitat for the flora and fauna. Most dives are 60-90 feet (18-27 m), with the deepest about 100 feet (30 m). Water temperatures range in the high-70s Fahrenheit (25-26 degrees Celsius) to low-80s F (27-28 C). A tropical wet suit is recommended. There are no large walls, and currents are virtually nonexistent, making the dives enjoyable for divers of all experience levels. Most of the dive sites are accessible by boat. Of the 100 dive sites, the majority are moored and maintained by the NPT and the Ministry of National Reserves to preserve the reef and marine life.

Most diving is done by boat. Local operators typically offer a two-tank morning excursion and a one-tank afternoon trip. Dive centers offer a full range of scuba courses, from introductory classes to advanced and specialty courses. Nitrox is readily available, and some dive centers also have underwater camera and video rentals available.

There are several different ways to enjoy the diving, including “day” dives that depart from and return to the dock after each diving excursion; live-aboard diving on dedicated dive charter boats such as the Cuan Law trimaran, or “rendezvous” diving from private yachts. For a rendezvous dive, divers staying on private yachts may arrange to have a local dive boat pick them up for a dive trip and return them to their boat when finished. 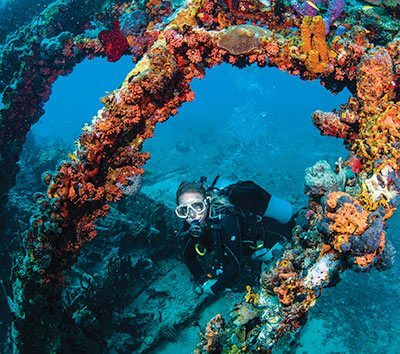 The wreckage of the Rhone is broken into two distinctly different sections.

Perhaps the most anticipated dive is on the iconic wreck of the RMS Rhone. Measuring 310 feet (94 m) long and 40 feet (12 m) wide, the Rhone was built in England in 1865 and sank in 1867 near Salt Island during a fierce storm. The wreckage is broken into two distinctly different sections. Covered with colorful encrusting marine life and several healthy black coral trees, turtles, parrotfish, angelfish and lobsters are commonly seen on the wreck. Once featured in the 1977 classic film, “The Deep,” the Rhone was the island’s first marine park.

The Chikuzen is also a popular wreck dive. The 266-foot (81 m) Korean steel-hulled refrigerator ship sank in 1981, only six miles (9.6 km) north of Beef Island. The intact hull rests on its side in a sandy seabed and is now a haven to an array of marine life. Other enjoyable wreck dives are the Coral Gardens off Great Dog Island, containing the remains of a Shorts 360 airplane, and Wreck Alley near Cooper Island, where three wrecks were sunk in one location.

The BVI are bordered on the west by the Caribbean and the east by the Atlantic. As a result, large pelagics such as tuna, dolphin and blue marlin often swim in the channels. From January to mid-March, migrating humpbacks, sperm and grey whales are also sighted.

When it comes to accommodations, the BVI practically has it all, from quaint guesthouses, to small boutique hotels and private villas, to high-end luxury resorts. And then there are the floating options, from do-it-yourself “bare-boat” yacht rentals to crewed private charters to dedicated diving live-aboards. There’s a vacation option — and an island — for everyone.

However, you won’t find the beaches lined with high-rise condos and there’s no high-stakes casino, either. And if there’s a traffic jam on Tortola, it’s likely being caused by an obstinate donkey blocking one lane of traffic.

Are you ready for that special vacation? Then pack a bag (and your dive gear) and journey to these peaceful, laid-back islands where gorgeous beaches, turquoise-tinted water, spectacular sailing and amazing diving are the perfect ingredients for an unforgettable BVI holiday.

Story and photos by Ruth and Barry Guimbellot