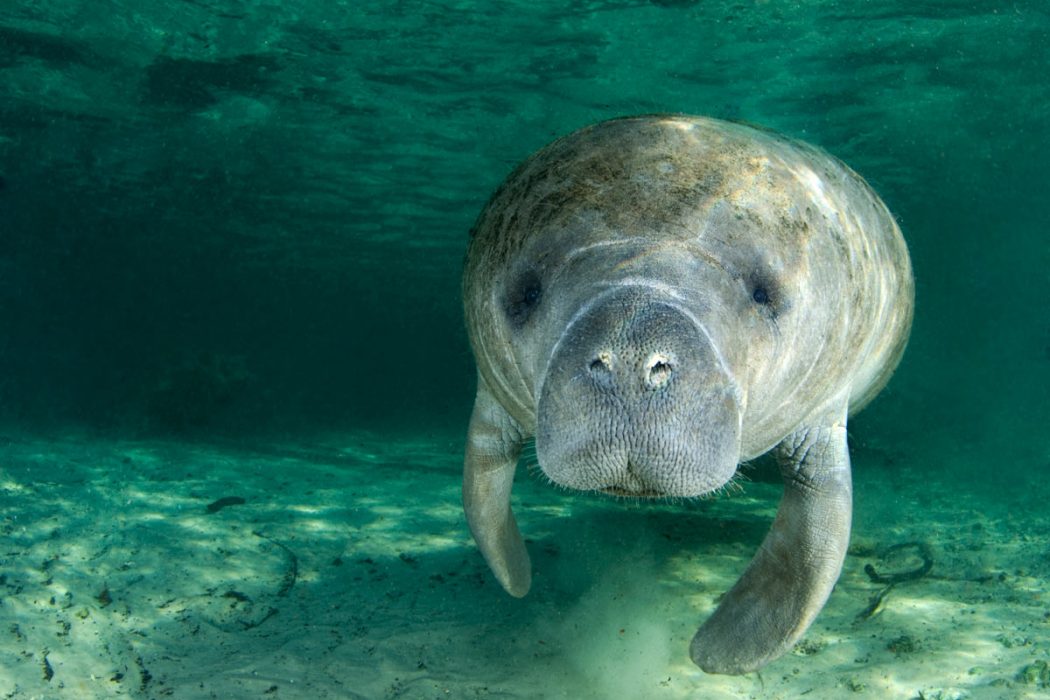 Legend has it that when ancient mariners first sailed the waters off what is now Florida, they occasionally mistook manatees for mermaids. Having swum with these rather sausage-shaped, 1,500-pound marine mammals, I have often wondered how long those poor, lonely men had been at sea to make such a grievous error. I assure you that there is a huge gap between having a bad hair day and being mistaken for a manatee.

Yet, there is no question that despite their less-than-svelte appearance, manatees have a way of capturing the hearts and minds of anyone that swims or snorkels with them. And it is now, during Florida’s winter months, that many divers flock to the popular Crystal River area and other waterways in Florida in hopes of encountering these lovable creatures.

RELATED READ: THE STARS OF THE SHOW: MARINE MAMMALS

American manatees are one of four living species described in the order of vertebrates known as Sirenea, a name derived from the Greek word for sirens, mythical partly human mistresses that lured ships onto rocks and sailors to the depths with their looks and mesmerizing songs. Three species of manatees live in waters bordered by the Atlantic Ocean, and the fourth is the Indo-Pacific species called the dugong. All are known as sea cows.

It is believed that the ancestors of modern-day manatees first appeared in the waters of Earth about 24 million years ago during the tumultuous Miocene period, but the fossil record of sirenians is incomplete, and the relationships between manatees and their ancestors is not well-known. Taxonomic specialists once thought manatees were closely related to walruses based on facial similarities, but studies using biochemical analysis of proteins have demonstrated that the closest modern relatives of sirenians are elephants, aardvarks, and small mammals known as hyraxes.

In Florida, and in the estuaries and mud flats of several Central American countries (most notably Belize) the species of manatee commonly observed is the American manatee (Trichechus manatus latirostris), a subspecies of the West Indian manatee (Trichechus manatus). Usually called the manatee by American diving enthusiasts, American manatees attain a size of up to 13 feet (4 m) and 3,500 pounds (1,575 kg) with a typical adult being 10 feet (3 m) long and weighing between 800 and 1,200 pounds (360 and 540 kg). Females tend to be slightly larger than males. While big, the American manatee is considerably smaller than the dugongs that occur in the Indo-Pacific.

Manatees are nonaggressive, nonterritorial herbivores that spend as much as six to eight hours a day feeding and two to 12 hours resting. The remainder of their day is spent traveling, investigating objects, and socializing by mouthing, rubbing against, and interacting with other manatees.

These mammals are best described as semisocial. The basic social unit is a mother and calf. During most of the year, the American manatees that live in the rivers of Florida tend to disperse into small groups. The groups tend to be temporary and vary with regard to sex, number and age, and it is common to encounter a solitary animal. During the colder months of winter, manatees usually congregate in areas with warmer water such as Crystal River, a very popular body of water for manatee-observing snorkelers. North of Tampa and southwest of Ocala, Crystal River is fed by thousands of underground springs that flow in at a year-round temperature of 72 degrees Fahrenheit (22 degrees Celsius).

Touch seems to be very important for manatees. Body contact is common between mother and calf. Manatee calves vocalize a lot when being rubbed or scratched, and vocalizations appear to be an integral part of the cow-calf relationship.

Nursing behavior is commonly observed by snorkelers and boaters. The mammary glands of females are under their flippers, so if you are in the water and see a youngster nestled at or nudging a mother’s flipper, common courtesy dictates that you give ground as it is all too easy to disrupt the feeding.

The gestation period of manatees is about 13 months, and mothers nurse calves for as long as 24 months. A sexually mature female can produce only a single calf once every three years. It is believed that in manatees sexual maturity is reached between the ages of 6 and 10 years.

Adults use high-pitched squeaks and whistles when communicating. These audible sounds should not be mistaken with the echolocation used by dolphins and other species of toothed whales. The squeaky sounds emitted by manatees are not a form of natural sonar, but clearly, they do help the animals communicate with and keep track of one another.

Seagrasses are the preferred foods of manatees in Florida waters. They especially love to devour hydrilla, the frilly grass that so many boaters absolutely despise because it clogs waterways and engine intakes. Amazingly, adults ingest as much as 100 pounds (45 kg) of grass per day. With an appetite like that, it is easy to understand how a herd of manatees can easily consume the daily production of a seagrass meadow.

The bristle-covered jowls of manatees are perfectly designed for the task of devouring huge quantities of grasses. When feeding, manatees use their facial bristles to dig into the bottom sediment. Then they vigorously shake their head back and forth in an effort to dislodge any attached sediment before finally chewing or swallowing the plants whole.

Manatees lack sharp, incisorlike teeth. Instead, their only teeth are designed for grinding. This adaptation assists them in consuming huge quantities of seagrasses, but leaves them somewhat defenseless against potential predators. Fortunately, manatees do not share their habitat with major populations of natural predators. In the open sea, American manatees are believed to be attacked by sharks, but big sharks only rarely make incursions into the shallow waters where manatees live. It is interesting to note that jaguars, caimans and sharks have been documented to prey on Amazonian manatees.

The range of the Florida manatee is primarily peninsular Florida, but extends as far north as Virginia and as far west as Louisiana. Like other manatees, American manatees spend the vast majority of their lives in shallow waters of bays, estuaries, creeks and rivers, rarely, if ever, venturing out into the deeper waters of the open sea, and never leaving the water to come onto land.

On average, manatees travel 40-50 miles (64-80 km) a day. Chessie, the famed manatee rescued from the cold waters of the Chesapeake Bay and returned to Florida, was tagged with a locating device that showed that this wanderer traveled as far north as Rhode Island during the hot months of the following summer. Although they are excellent swimmers, manatees have been documented to dive no deeper than 33 feet (10 m), and they normally feed no deeper than about 10 feet (3 m) below the surface.

However, like all other marine mammals, manatees are air breathers and must come to the surface of the water in order to breathe, with the average interval between breaths being two to three minutes. Manatees take air in through large nasal passages found near the top of their head. This positioning enables manatees to take in life-sustaining air with minimal effort. When the animals are submerged, the nasal passages are sealed by large flaps.

The grayish bodies of manatees are often colored with patches of green algae, a feature that gives many specimens a mottled appearance. Some specimens have skin that is rather rough to the touch, and in others, the skin is quite smooth. Most specimens possess some sparse, rather coarse, body hair, and their skin resembles that of elephants. Like all other mammals, manatees need to maintain a constant body temperature.

Manatees have flippers that help them manuever, while their forward propulsion, or thrust, is achieved through the use of their rounded paddlelike tail. Manatees often appear to be motionless; however, they can sink or rise to the surface with little effort simply by adjusting their buoyancy via the air in their lungs. And as slow and lethargic as manatees often appear to be, they have been clocked at speeds approaching 15 mph (24 kmph) for short bursts, but usually cruise at speeds of only 2 to 6 mph (3 to 10 kmph).

Because of the Marine Mammal Protection Act and endangered species status that has been bestowed upon manatees, strict regulations govern when, where and how snorkelers can encounter manatees in the waters of Florida. Designated sectors of Crystal River have been set aside as marine sanctuaries where entry by snorkelers, divers, swimmers and boaters is prohibited by law. In other areas, boating speed limits are strictly enforced.

Only a little over 230 years ago, a fifth species of Sirenian inhabited the waters of the Bering Sea. Known as the Steller’s sea cow, this behemoth grew to proportions of 30 feet (9 m) and 9,000 pounds (4,050 kg). The species was first discovered by western man in 1741 in an area near the Bering Sea off Alaska. Unfortunately for this, the largest Sirenian, the meat of Steller’s sea cows tasted quite good to humans, and the downfall of the species began almost immediately. By 1768, only 27 years later, the species disappeared from overhunting.

It would be nice to say that we have learned from the dreadful mistakes and that living species of Sirenians are safe. However, the future of American manatees remains uncertain.

By far, the biggest threat to these animals comes from man. A high percentage of manatees have lost flippers or other body parts because of collisions with boats and their propellers. The lack of natural predators has led to a lack of fear toward almost anything in these mammals, powerboats included. And unfortunately, collisions are all too common. Even though manatees are known to live to 50-60 years of age in the wild, many highly acclaimed specialists believe that the accidental death rate of Florida’s manatee population exceeds the birth rate. This spells serious trouble for a beleaguered population of no more than 3,500 specimens. However, it is encouraging to know that officials in Florida have taken significant steps to reduce the pressure from boaters and commercial development.

As I ponder the future of manatees, the words of William Beebe, the first curator of birds at the Bronx Zoo, come to mind. In a quote that is often mentioned by naturalists, Beebe said, “When the last individual of a race of living things breathes no more, another heaven and earth must pass before such a one can be again.” It is a sobering comment. One thought that can keep all of us going in the quest to save the American manatee is that despite all the problems that confront these gentle creatures, most specialists believe this is a battle that can be won.

It is very easy to set your expectations of an encounter a bit too high and begin to pursue or harass a manatee, especially when the animal is being a little coy, or wary. But remember, it is against the law in these well-monitored waters to pursue, hang onto or chase manatees. It is, however, perfectly legal to hang motionless in the water and allow a curious manatee to approach you. Sleeping, feeding and nursing animals should be left alone.

Some manatees seem to enjoy gentle, open-handed stroking along their body and neck, but not on their tail. Specialists suspect that manatees can’t see their tail area and likely feel vulnerable. Once a snorkeler has gained a manatee’s confidence, it is quite common for the animal to roll over onto its back and expose its large underbelly. Many specimens love to have their underbelly gently scratched for extended periods of time.

American manatees are one of four living species described in the order of vertebrates known as Sirenea, a name derived from the Greek word for sirens, mythical partly human mistresses that lured ships onto rocks and sailors to the depths with their looks and mesmerizing songs.