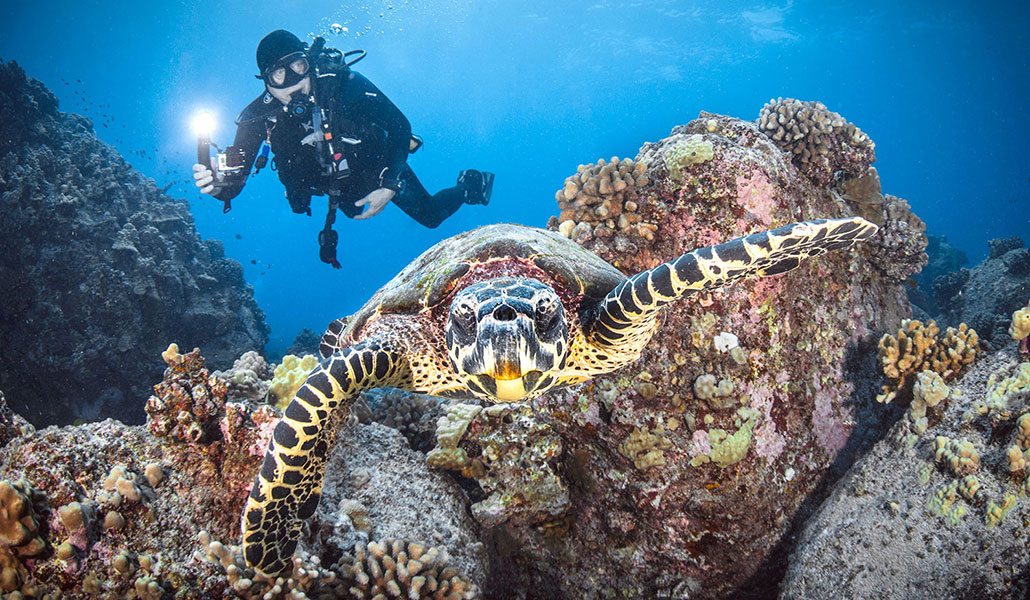 Hawaii is paradise. It might be cheesy to say it, but there’s music in the air there.
~ music star Bruno Mars

Paradise has a platinum-selling soundtrack. On the Big Island of Hawaii, the main track includes the sounds of palm trees swaying in the breeze, waves rushing up to meet the shore and, in the distance, the strumming of a ukulele being played at a luau. Another track features tropical birdsongs and the occasional staccato of spinner dolphins as they break the surface in Kona Bay for a breath of air. The sounds of this Hawaiian vacation playlist are simultaneously exciting and relaxing. And for divers, there’s another pleasing track — the sound of bubbles rising to the surface from the reef below.

The lyrics are equally inviting: the warmth of the tropics, beautiful beaches, exciting dive sites, humpback whale encounters and a wide range of topside adventures to enjoy. Instead of shopping iTunes for the music video, book a flight to the island of Hawaii and experience it for yourself, without ever leaving the good ol’ U.S. of A. Collectively, the islands of Hawaii are the 50th state in the United States, and the biggest island in the state is also named Hawaii.

The Big Island is the home of five volcanoes: Mauna Loa, Kilauea, Hualalai, Kohala and Mauna Kea. Two of the world’s most active volcanoes, Mauna Loa and Kilauea continue to add to the island’s landmass.

The peak of Mauna Kea rises 33,476 feet (10,144 m) above the floor of the Pacific Ocean, making it not only the tallest volcano on the island but also the tallest mountain on Earth. When measured from its base on the seafloor to its peak, Mauna Kea eclipses Mount Everest by more than 4,000 feet (1,212 m).

The human history of the Big Island is shared with the people of the entire archipelago. The islands are believed to have been uninhabited by humans until the first Polynesians arrived in sailing canoes in about A.D. 300. Their descendants likely lived in peace for about 500 years. Sometime around A.D. 1200 the Tahitians arrived, and they soon began to subjugate the existing population.

Laws known as the kapu governed early Hawaiian society, dividing it into four groups: the chiefs, priests and craftsmen, commoners and outcasts. The kapu system also addressed the use, protection and conservation of many natural resources. However, there was still a higher kapu — that of the gods. Many historians believe that the kapu system brought Hawaiians a system of laws and rituals protecting the spiritual power of energy that existed in all living things. This belief was symbolized in part through the worship of many gods, with the four principle ones being Kane, the God of Life; Ku, the God of War; Lono, the God of Agriculture; and Kanaloa, the God of the Ocean. In addition, there were dozens of demigods ruling over the natural world. 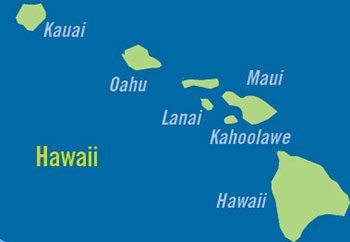 While the Big Island is twice the size of all the other major Hawaiian Islands combined, on a global scale the Big Island really isn’t very large. What it lacks in size it makes up for in diversity, as climate and topography is one of the island’s strongest attractions.

The climate on the Big Island varies much more according to location than season. Legend has it that two Hawaiian gods, the volcano goddess Pele and the weather-controlling god Kamapua’a, struck a deal to make the west side of the island dry and its east side lush and wet.

There are 12 distinct microclimate zones on the island, with extremes ranging from the tropical rain forests of the eastern side to the frozen tundralike permafrost conditions on Mount Mauna Kea to arid coastal desert in the south. The western coast, the home of the island’s tourist destination hot spot of Kailua-Kona and the region that attracts the vast majority of visiting divers, enjoys a well-deserved reputation for perennial sunshine. It can get quite warm and humid at times. If you don’t enjoy the heat all you have to do is head up the mountain into coffee country where temperatures are cooler.

While there are a number of white sandy beaches on the Big Island, especially along the Kohala coast north of Kona, the Kona area coastline is mostly rocky.

The community of Hilo on the east side sits in a beautiful crescent-shaped bay that is ringed by lush rain forests. The operative word here is rain; there is measurable rainfall an average of 278 days a year. 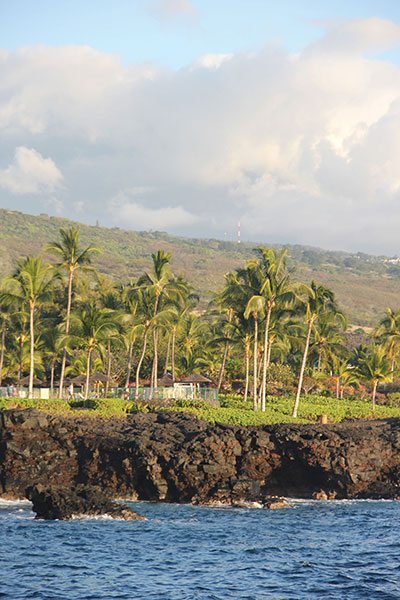 Circumnavigating the island by car is an all-day affair. Some roads follow the coastline and are, for all practical purposes, at sea level, but in other places the main road gains considerable elevation as it wanders through rain forests, coffee country and macadamia nut groves. Scuba divers must remember that driving to altitude immediately after diving can increase the risk of developing decompression sickness, or the bends, and plan accordingly.

Europeans first arrived in 1778 when the famed British explorer Captain James Cook and his crew sighted Oahu. Believed by some to be the reincarnated god Lono, Cook first was received with great reverence. Unfortunately for Cook, his god-like status didn’t last. Hawaiians on the Big Island killed him the following year.

Cook’s “discovery” of the archipelago was big news in Europe and America. Soon whalers and traders from America, England, Russia and France headed for Hawaii, bringing with them diseases that decimated the indigenous population. It is estimated that when Cook first arrived the population throughout the islands was roughly 500,000, but it dwindled to less than 50,000 by 1875.

The islands of the Hawaiian archipelago were annexed by the United States in 1898. Hawaii attained statehood in 1959.

The dive sites off the Big Island are legendary for their marine life, exceptionally good visibility and variety. The Kona Coast is blessed with more than 80 known dive sites and some of the state’s calmest water, with underwater visibility that often exceeds 100 feet (30 m). Water temperatures range from the low 80s F to the low- to mid-70s F (high 20s C to the low to mid-20s C), which is cooler than many “tropical” destinations. Many divers use 5-millimeter wet suits as well as a lightweight tropical hood and gloves to keep warm.

One of the best things about diving in Hawaii is that you’ll see lots of endemic species — creatures found nowhere else. About 23 percent of the fish species found in the state’s waters are only found in Hawaii. Whether it is swimming through a lava tube filled with a school of colorful snapper, getting eyeball to eyeball with a green turtle, or diving with feeding manta rays at night, the reefs of the Big Island have plenty to offer divers of all experience levels.

Many sites offer excellent diving in only 30-50 feet (9-15 m) of water, allowing for plenty of bottom time. Another attraction of Big Island diving is that during surface intervals operators often cruise a short distance out into the deep blue water of the Pacific to look for dolphins and other nomadic open-sea creatures.

Much of the diving on the Big Island is done from local charter boats. Nitrox is available through some operators. A typical day charter involves a two-tank dive leaving the dock after breakfast and returning by early afternoon. Some afternoon boat dives are available, as are night dives. Beach diving is popular as well, but in some places the rocky shoreline can make for challenging entries and exits. The live-aboard dive charter Kona Aggressor II enables guests to see more sites than those concentrated around the Kona Coast where most day charters go.

The nighttime manta ray dive at Garden Eel Cove is considered Kona’s signature dive. Divers usually enter the water right around sunset and form a loose circle around a number of very bright lights put in place by the dive operators at a depth of about 35 feet (11 m). The light attracts plankton that serves as a magnet for rays. Mantas swim through the lights feeding on plankton, often doing a series of graceful back flips right in front of the divers. 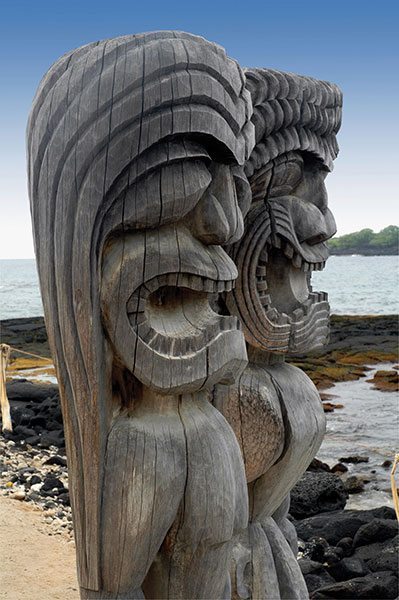 From spa treatments and fine dining, to hikes to waterfalls and through rain forests, from watersports to golf, the Big Island has plenty to offer visitors.

The Hawaii Volcanoes National Park offers a setting where visitors can see the Kilauea caldera and enjoy some great scenery. The park entrance is 4,000 feet (1,212 m) above sea level. Pack several layers of clothing to be comfortable as temps change. A visit to the Hilo area offers the opportunity to enjoy numerous waterfalls fed by streams on Mauna Kea. A visit to the Hawaii Tropical Botanical Garden should be on your list.

You can go for scenic helicopter tours that provide unique views of the volcanoes and coasts, hire a guide and rent all-terrain vehicles and get out and see some of the island’s out-of-the-way treasures, or rent a bicycle for a leisurely cruise around Kailua-Kona. Sunset boat cruises and dolphin tours are also available. During the winter, whale-watching tours seek out humpback whales. And any time of year you can go parasailing, sailing, surfing or take a ride on a glass-bottom boat or submarine. Polynesian dinner shows that include hula dancing are available nightly, and so is a long, quiet walk on a beach.

There’s magic in the air in Hawaii, and it’s mesmerizing. Lean in and listen closely, and it’s sure to cast a spell.

Thanks to Jack’s Diving Locker and the crew of the Kona Aggressor II for their assistance with this article.

Story and photos by Cathryn Castle