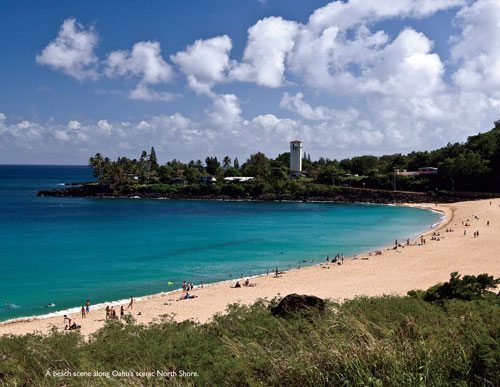 Mention Oahu and even those who only know this jewel of the Hawaiian archipelago through books, films and the stories of others are quick to envision Waikiki, Diamond Head, Pearl Harbor and Sunset Beach. Along with events such as the National Football League’s annual wintertime Pro Bowl and images of sun-tanned surfers and beautiful maidens in hula skirts, these landmarks have been burned into the minds of millions of people around the world.

Collectively speaking, the aforementioned places, events and images have created a widely accepted impression of modern-day Oahu (often spelled O’ahu in Hawaii). While some visitors see no need to leave Honolulu and Waikiki where they enjoy glitz, glitter, late-night entertainment, historic monuments and beautiful people on popular beaches, those who do explore the rest of the island quickly discover another type of experience. They enjoy a land of jaw-dropping scenery filled with verdant mountains, running streams, cascading waterfalls, craggy shorelines and long stretches of beaches that seem to only exist in television shows and movies. Within only a short drive from Honolulu you can go back in time to old Hawaii, a land filled with charm, a laid-back lifestyle and the aloha spirit. Whether you seek crowds, parties and nightlife to complement your diving, prefer to get away from it all and relax, or you want a combination of the two, Oahu offers a magical getaway.

As is the case with all of Hawaii, Oahu is part of the United States. For U.S. citizens this makes travel exceptionally easy, as no passports, immigration forms or inoculations are needed.

Oahu, like all the Hawaiian Islands, is volcanic in origin. The island is the combined result of two separated shield volcanoes, Wai’anae and Ko’olau, which have risen from the depths of the seafloor where they were born. The broad, green Oahu valley separates the two volcanoes. The highest point on the island, the peak of Mount Ka’ala in the Wai’anae Range that runs along the island’s drier leeward, or western side, rises 4,003 feet (1,213 m) above sea level.

Some of Oahu’s most fantastic scenery can be enjoyed along the southeast coast that extends from Kahuku Point in the north to Makapu’u Point in the south, a stretch that encompasses the scenic Ko’olau Range, Diamond Head Crater, Hanauma Bay — the island’s most popular snorkeling spot, and some fabulous beaches. From the road, stratified rock formations, volcanic craters, dramatic sea cliffs and magnificent stretches of white-sand beaches reveal themselves in scenes that can’t help but make one fall in love with Oahu. The protected southern coast is best known for the beaches of Waikiki and the city of Honolulu, while the North Shore is known for flat, protected summertime water and the enormous surf that attracts the boldest surfers in the world during winter where they compete at beaches such as the Bonzai Pipeline, Waimea and Sunset Beach.

As is the case with the other major Hawaiian islands, Oahu experiences only two seasons: “summer” between May and October, and “winter” from November through April. Depending on where you are on the island, the average temperature varies from 69 degrees Fahrenheit (21 degrees Celsius) to 81 F (27 C). On the beaches of Waikiki the average temperature during the middle of winter is 72 F (22 C) and 81 F (27 C) in the height of summer. Daytime highs in summer are a few degrees higher, and nighttime lows in winter are a few degrees lower. The average annual rainfall ranges from 20 inches (51 cm) in the leeward Wai’anae area to 158 inches (401 cm) in the Upper Manoa valley. The practical translation is that you want to be prepared for some moderately hot days, cool evenings and occasional rain showers.

Although many Pacific islands were settled as early as 1,000 B.C., it is generally believed that the first human inhabitants of Oahu were a tribe of Marquesans who sailed to the island from Polynesia in the fourth or fifth century. This version of history is challenged by local folklore that suggests a mythical race of small people known as the Menehune were there first. Today, in many parts of the Hawaii the Menehune “get blamed” when locals misplace an item such as their keys by claiming “the Menehune must have moved them.” The lives of the early Hawaiians were strongly influenced by the combined power of the natural world and their gods, who appeared in both human and animal form. The influence of animism increased in the 12th century when a powerful priest introduced the practice of human sacrifice and a body of laws known as the kapu system that governed society and the natural world.

The first European to visit Hawaii was the British explorer James Cook who arrived in 1778. One year later Cook was slain in a dispute with the locals on the island of Hawaii. Around this same period several rival chiefs vied for control of the islands. King Kamehameha the Great eventually emerged victorious, with Oahu being the last major independent island to fall in 1795. His victory led to a united kingdom.

Hawaii’s new ruler moved to the flourishing village of Honolulu in 1809 where he worked to control and develop the flourishing trade taking place with merchant ships from Europe, America and Russia. By the time King Kamehameha died in 1819 Honolulu was Hawaii’s center of commerce. As commerce grew, sugar plantations became established during the 1830s, increasing the demand for inexpensive immigrant labor that arrived from many parts of the globe, an influence that remains evident in Hawaii’s current ethnic diversity.

Honolulu replaced Maui as the capital of the Kingdom of Hawaii in 1845. For the next five decades the influence of Western expatriates continued to expand.

Although it was strongly opposed by some, the Hawaii Islands were annexed by the United States in 1898. Concerns turned to military matters during World War II. After the attack on Pearl Harbor by the Japanese in 1941, Oahu was used as a main command post for U.S. forces in the Pacific. The island was also the epicenter of the clampdown on U.S. citizens with Japanese ancestry by the American government.

Although it was strongly opposed by some, in 1959 Hawaii became the 50th state in the United States. Some opposition to statehood continues to this day. 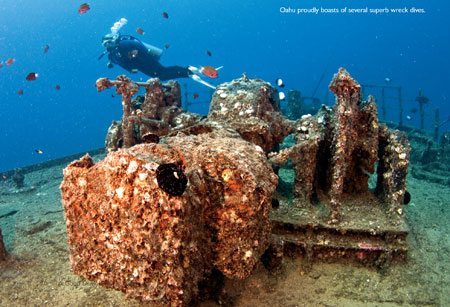 Along with its usually excellent visibility and top-shelf professional service provided by local operators, Oahu’s diving offers extraordinary variety in topography, depth and marine life. About 23 percent of the fishes found in Hawaii’s waters can only be found in Hawaii, meaning that in Oahu you have an excellent opportunity to see a lot of fishes that cannot be found in diving destinations outside the state. In addition to the high number of endemic species, Oahu proudly boasts of a number of superb wreck dives that provide a diving dimension not offered by the sister islands.

The Y0-257, a 175-foot (53-m) Navy yard oiler built in the 1940s was sunk in 1989 by the Atlantis Submarine Company to create an artificial reef off Waikiki for the viewing pleasure of their “dry divers.” The “YO” rests on the sand at 95 feet (29 m). Only a short swim away, the San Pedro is a newer wreck that was also put down by the submarine company. The 168-foot (51-m) Sea Tiger is off the island’s south shore. A typical dive is to depths between 80 and 100 feet (24 and 30 m), but the seafloor is a bit deeper. Only a 10-minute boat ride from Kewalo Boat Basin, the Mahi, an 800-ton (720-metric ton) minesweeper turned research vessel, is an extremely popular wreck to explore as is the Corsair, a once proud airplane that met its demise in 1948 as a result of poor fuel supply planning. The small plane sits on a sandy plain in just over 100 feet (30 m) of water.

These wrecks are marine life magnets. Squadrons of spotted eagle rays, green turtles, huge barracudas, large schools of colorful snappers and the occasional whitetip reef shark and gray reef shark are just the beginning of the list of creatures that are often seen. As a rule, because of their depth the wreck dive is usually the first dive of two-dive boat trips. The second dive takes place over a shallower reef with a maximum depth of 40 feet (12 m) or so. On those dives the attractions are reef critters such as frogfish, leaf scorpionfish, and even whitetip reef sharks as well as a wonderful variety of invertebrates.

The beach dives along Oahu’s world-famous North Shore are about as easy and fun as beach diving gets, at least in the summer when the prevailing conditions often create lakelike conditions. It’s a snap to find well-protected entry/exit points and short swims to lava tube swim-throughs, mini-walls and crevice-filled reefs where you can admire creatures that range in size from nudibranchs to green turtles. There is little need to go deeper than 40 feet (12 m), and given your goals, dives can easily last an hour or more.

Another attraction is the shark dive off the North Shore where adventurous divers seeking an adrenalin rush and some bigger critters to admire and photograph step directly from their boat into a protective cage that remains at the surface. Bait is used to attract Galapagos sharks, sandbar sharks, the occasional tiger shark and other species.

During winter months Oahu’s waters are home to migrating humpback whales, a species well known for songs that are often heard underwater, and spectacular surface displays.

The water is slightly cooler than in many tropical destinations, and divers routinely use 5-mm-, or even 7-mm-thick wet suits as well as a hood and gloves to keep warm. In the summer the water temperature is sometimes as high as 82 F (28 C), but in winter it often drops to as low as 72 F (22 C). Oahu’s underwater visibility often exceeds 100 feet (30 m).

With the exception of the North Shore beach dives, most of the diving off Oahu is conducted from local charter boats. Most charters provide tanks, weights, divemasters, light snacks and beverages. Nitrox is available through some operators.

When the diving’s done it’s easy to find a variety of ways and places to surf, boogie board, body surf, swim, Jet Ski, kayak, and hike. You also have the option of teeing up on some world-class links, renting a bicycle, going horseback riding, taking an ATV tour or any of dozens of other choices. Oahu is an outdoorsy kind of place, and with the obvious exception of snow skiing or ice fishing, if you want to enjoy an outside activity, it is probably available in one form or another.

Other options include a visit to a spa or the zoo, hanging out at the family-friendly Ala Moana State Beach Park or the Waikiki Aquarium, both of which are along the northern end of Waikiki, spending time at the highly acclaimed Bishop Museum or visiting the historical Arizona Memorial, a moving tribute to those who gave their lives for their country in the attack on Pearl Harbor. If shopping is your thing, whether that means the Chinese markets or the high-end stores in Waikiki, there are options aplenty.

Even with all of those choices you will want to save some time to take a scenic drive or two to enjoy majestic vistas and the charm and laid-back lifestyle of “old Hawaii” that awaits those who travel outside of the hustle and bustle of Honolulu, Waikiki and Pearl Harbor. The scenery along the eastern shore and Pali Highway en route from the Honolulu area to the charming community of Kailua should not be missed, and the same can be said for the drive along the North Shore that overlooks gorgeous beaches and the channel between Oahu and the island of Kauai.

Story and Photography by Marty Snyderman