Capturing behavioral images is often a process that involves repeated attempts to get your shot. Sometimes that process takes an entire dive. Sometimes days. And in my case, the photo you see here of an Indo-Pacific fish known as a slingjaw wrasse is the result of several years worth of effort. 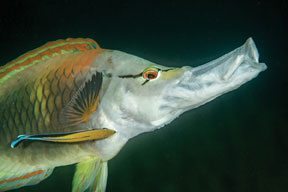 As its common name suggests, the slingjaw wrasse is equipped with highly protrusible jaws that can extend forward about half the length of the fish’s body in an instant. This adaptation enables slingjaws to surprise unsuspecting prey from a distance.

I have never seen a slingjaw capture prey, but I have seen them extend their jaws on several occasions. But trying to predict exactly when and where I could photograph this astonishing behavior proved to be seriously problematic for several years. Nevertheless, the more times I saw the behavior, the more determined I became to capture the action with my camera. So, every time I saw a slingjaw I followed the fish as closely as I could.

That strategy proved hopeless as wary fish kept their distance. Fortunately, one day I saw a slingjaw protrude its jaws while the fish was being cleaned. I had an “aha” moment; instead of chasing slingjaws I decided to try locating a cleaning station where a slingjaw was getting cleaned.

I got that chance on a recent trip to the Micronesian paradise known as Yap. One afternoon I saw a slingjaw at a cleaning station, but I could not get into a good shooting position fast enough to photograph the action. I went back to the site the next day, and this time I got close enough, but the wrasse was always facing away from me. No luck.

Two days later I returned to the cleaning station, but no slingjaw showed up. There is always the temptation to move on to other subjects when things aren’t going my way, but giving in only guarantees not getting my dream shot on that dive. I decided a long time ago not to put a time limit on my photographic pursuits. So, I vowed to try again.

The next day I headed straight for the cleaning station. And finally, after several years and lots of dives, I got this “lucky shot.” From a distance of roughly three feet (0.9 m) I was able to photograph a slingjaw wrasse protruding its jaws while being cleaned.

There are times when a photographer’s success in capturing animal behavior comes after many unsuccessful attempts. That is simply the nature of Mother Nature. It helps to learn as much as you can about your subject, observe its behaviors and if you really want the shot, stick with it. For as long as it takes.